Abstract: Native starches, irrespective of their sources, are undesirable for many industrial applications because of their inability to withstand processing conditions. Functional properties of blended finger millet starch using maize modifiers at different ratios for specific applications in food processing industry were determined using standard methods. Functional properties varied according the type of modifier used and blending ratios of the native finger millet starch to that of the modifier. Higher bulk density of the blended starch makes the flour more suitable for packaging, transportation and use in some food preparations. GG starch is a better emulsifier compared to the native MS and FM starch. The blended starches have less tendency of absorbing and retaining water than its native form. Low Carr’s index and porosity indicated poor flow for the blended starch, due to cohesiveness of the blended flour. The functional properties of the blended starch did not vary significantly (P ≤ 0.05) according to mixture ratios; however, show some significant changes according to the type modifier used. Higher charring and browning temperatures of the blended starch make the starch useful in food processes that require heating at high temperatures. Depending on the desirability for use in various food products, functional properties of finger millet flour may be improved by preparing their blends with maize modifiers in suitable proportions.

Food crops, including cereals, have occupied an important place in human nutrition as they remain the major sources of starch and proteins for a large proportion of the world population, particularly in the developing countries [1,2]. Starch is an important ingredient in various food systems as thickening, gelling and binding agents. It imparts texture to a great diversity of foodstuffs such as soups, potages, sauces processed foods. The versatility of starch in industrial applications is clearly defined by its physicochemical properties [3].

Native starches, irrespective of their sources, are undesirable for many industrial applications because of their inability to withstand processing conditions such as extreme temperature diverse pH and high shear rate [4,5]. In order to improve on the desirable functional properties and overcome its limitations, native starches are often modified. Formation of blends of different flours in an appropriate ratio may improve the functional properties and nutritional and product quality of food materials [2,6,7].

The application of flour or starch in food production industry depends on various functional properties, which include dispersibility, water absorption capacity, pasting, retrogradation, viscosity, swelling power, and solubility index; which varies considerably based on the type of crop as well as ecological and agronomic influence [8] (Peroni et al., 2006). These functional properties depend on the composition and molecular structures of the starch, which include amylose/amylopectin ratio, phosphorus content, starch molecular weight, granule size and the chain length distribution [1,9]. Functional properties also determine the application and end use of food materials for various food products [9 – 11].

Functional properties of food materials play a significant role in manufacturing, transportation, storage, stability, texture, taste and flavor of food products; and are also required to evaluate and possibly help to predict how new proteins, fat, fiber and carbohydrates may behave in specific systems as well as demonstrate whether or not such protein can be used to stimulate or replace conventional protein [1,12].

The variation in functional properties is attributed to the relative proportion of carbohydrates, lipids and protein in different flours. Functional properties of flours are usually affected by any change in the processing conditions such as extraction, isolation, drying, milling, blending, baking, cooking and fermentation [2,13].

Five kilograms of finger millet grain which was identified by the botany department and 1 kg each of the food modifiers used for the modification were bought from a supermarket in Keffi, Nigeria manufactured by Bigman, UK.

The method of Sira and Amaiz [14] was adopted in the preparation of the samples. The finger millet grains (5kg) were properly washed with water and steeped for 24 hours in 0.25% sodium hydroxide solution in 10 liters of water. The steeped grains were washed and ground using a Philips blender. Water (5 liters) was added to the paste and screened using 80 µm mesh sieve and a 270 µm consecutively before it was centrifuged. The top brown layer was decanted and excess sodium hydroxide was removed by washing the sediment (5 liters × 4) with distilled water until the pH of starch slurry was close to neutrality using a litmus paper. The starch was dried overnight in an oven at 45°C, cooled and stored in an airtight plastic container.

The data were subjected to simple statistical techniques such as mean, standard deviation and correlation coefficient (CV). Analysis of variance (ANOVA) was also carried out to determine any significant differences (P ≤ 0.05) in levels of the functional properties of the blended flour using SSPS statistical package.

Results in Table 2 for native finger millet starch blended with GG maize modifier indicated that True and Tap densities did not vary much with varying ratios of the blended starch. The highest BD (0.368 ± 0.01 mg/L) was obtained in GGA2. FC increased with increasing modifier contents. EC was highest for GGA1 (44.10 0.04%). The highest CI (43.55), HR (1.77) and porosity (98.70) were also recorded in GGA1. BT increased with an increase in modifier contents, while CT decreased from GGA1 to GGA3.

True density (True D) values for the blended XG and GG starch (Fig. 1) were higher than in the native starch. Tap density (Tap D) were lower compared to MS but higher than in FM. Bulk density levels were generally higher than the values for the controls. Bulk density is a function of mass and volume of flour, which depends on the size of particles and initial moisture content of the flour. Relatively high bulk density makes the flour more suitable for packaging, transportation and use in the preparations. However, low bulk density is considered favorable for formulation of complementary foods [5]. The BD values reported for the blended starch were lower compared to the values reported by Kaur et al. [18] for blended wheat and chickpea flour (0. 41 ± 0.02 mg/L) and maize flour with chickpea flour (0.42 ± 0.006 mg/L). FC for the blended GG and XG (Fig. 2) were similar to FM starch, but higher than the values for MS. EC for GG was higher than in the native starch. Blended starch had lower HC compared to FM. FC is related to the amount of solubilized proteins, polar and non-polar lipids in a sample; and is used to improve the texture, consistency and appearance of foods [19]. FC is also a function of the type of protein, pH, processing methods, viscosity and surface tension. Protein in dispersion may cause a lowering of the surface tension at the water air interface, thus, forms a continuous cohesive film around the air bubbles in the foam [1,20]. GG and XG blended starch may be better substitutes for native FM to be used in improving food quality. Differences in the EC may be related to their solubility. 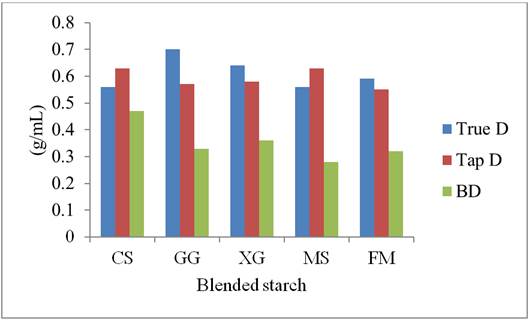 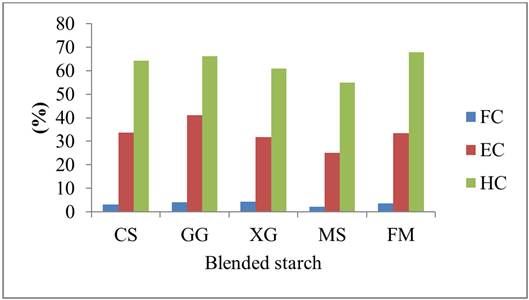 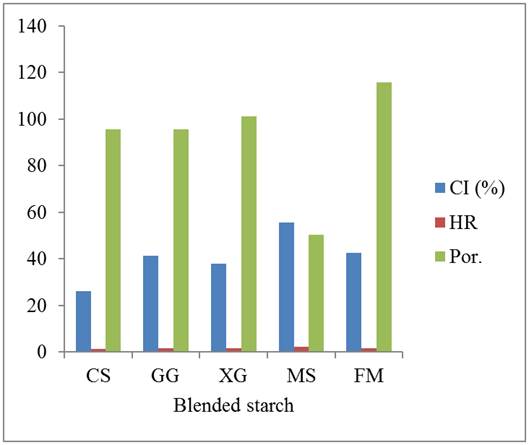 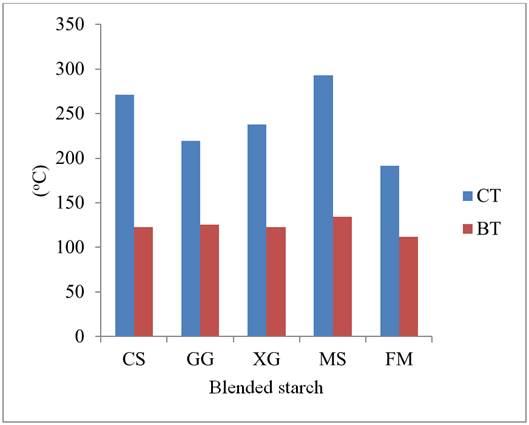 Hydrophobicity of protein has been reported to influence their emulsifying properties [20], which depends on solubility, pH and concentration. The presence of non-polar side chains which might bind the hydrocarbon side chains of oil among the flours, possibly explains difference in oil binding capacity of the flours [21]. The relatively high EC values for the GG starch make the starch a better emulsifier.

HC is a measure of association of hydrophilic functional groups of protein with water in a water stressed environment [4], and is an important function of protein in various food products like soups, dough and baked products [9,22]. The HC values obtained indicate that the blended starch have less tendency of absorbing and retaining water than its native form [5]. The difference in protein structure and the presence of different hydrophilic carbohydrates might be responsible for variation in the HC of the flours. Flours with high HC have more hydrophilic constituents such as polysaccharides [23,24]. HC values for the blended starch were higher than the result (57.68 ± 2.04) reported by Due et al. [19].

Flow properties of powders are of significance in determining whether a material is suitable as a direct compression excipient. HR and CI percent compressibility are considered as indirect measurements of powder flow property. HR is an indicative of inter-particle friction, while the CI shows the aptitude of a material to diminish in volume. As the values of these indices increase, the flow of the powder decreases. In general, HR greater than 2.5 indicates poor flow; CI below 16% indicates good flowability while values above 35% indicate cohesiveness [5,24]. CI and porosity (Fig. 3) of the blended starch were lower compared to the native FM starch. HRs for the blended starch, though similar to FM and MS, were < 2.0, an indication of good flow. Low CI and porosity indicated poor flow for the blended starch, due to cohesiveness of the blended flour. Porosity determines the swelling capacity of starch. The higher the porosity, the more the inter-particulate spaces where water could be absorbed. Lower porosity values for other blended starch as compared to the native FM and MS starch might be attributed to low inter-particulate spaces resulting from particle size and shape. HRs for all the blended starch were higher than the value (1.20) reported by Achor et al. [5] for native cassava starch flour.