Abstract: G6PD deficiency is one of the most common human enzyme deficiencies in the world. It is particularly common in populations living in malaria-endemic areas. The aim of this study is to molecularly screen G6PD enzyme among deficient children (aged 0-5 years) with Plasmodium falciparum malaria in Katsina State, North-western Nigeria, and a region with no any molecular information on G6PD enzyme. A total of 200 blood samples were collected from children with Plasmodium falciparum malaria attending six selected hospitals located across the three senatorial zones of the state from March 2015 to May 2015. G6PD deficiency was detected qualitatively using G6PD screening test. Polymerase Chain Reaction (PCR) of 7 samples (6 deficient and 1 control) shows the presence of G202A mutation in all the samples. The nucleotides sequence obtained from sequencing reaction of one deficient and one control samples are 97% homologous to other G6PD genes of different strains. This study has indicated a high prevalence of G6PD deficiency among the study population. Based on the results obtained, there is a need for the routine screening of children for G6PD deficiency in our environment and training of paediatricians in order to avoid cases of drug-induced anaemia, particularly in the treatment of malaria.

Glucose-6-phosphate dehydrogenase (G6PD) is an enzyme found in the cytoplasm of all cells catalyzing the first reaction in the pentose phosphate pathway, providing reducing power to all cells in the form of NADPH (reduced form of nicotinamide adenine dinucleotide phosphate). Since red blood cells do not contain mitochondria, the pentose phosphate pathway is their only source of NADPH; therefore, defence against oxidative damage is dependent on G6PD [1].

It has been estimated that Glucose-6-phosphate dehydrogenase (G6PD) deficiency affects around 353 million people worldwide, with 96 million in the malaria endemic countries [2]. Indeed, G6PD deficiency prevalence in a given region has been proposed as an important marker of the selective pressure exerted by malaria [3].

G6PD deficient status has been associated with protection against Plasmodium falciparum malaria [4,5]. G6PD deficiency is one of the most common human enzyme deficiencies in the world. It is particularly common in populations living in malaria-endemic areas. The highest frequencies are detected in Africa, Asia, the Mediterranean region, and in the middle-east; owing to recent migrations, however, the disorder is also found in North and South America and in northern European countries [6].

G6PD deficiency is one of the most common X-linked recessive hereditary genetic defect caused by mutations in the G6PD gene, resulting in protein variants with different levels of enzyme activity, that are associated with a wide range of biochemical and clinical phenotypes. It affects the erythrocyte metabolism, featuring non-immune haemolytic anaemia in response to a number of causes [7]. Patients with G6PD deficiency develops haemolytic anaemia during acute malaria infection and when treated with certain therapeutic agents such as anti-malarials, antipyretics and antibiotics which have oxidant properties. Increased oxidative stress in G6PD deficient cells is well documented [8] and the erythrocyte exposure to oxidative stress causes haemoglobin denaturation, ultimately resulting in haemolysis. Other clinical conditions include neonatal jaundice, which may result in neurological complications and death [9].

More than 176 mutations and 500 different variants have been described to date for the G6PD gene; however most are single nucleotide changes, leading to amino acid substitutions [10,11]. The world health organization grouped the G6PD variants into five classes based on their enzyme activity and clinical manifestations, with class I demonstrating the severely deficient cases that are associated with chronic non-spherocytic haemolytic anaemia [12].

Malaria is a febrile illness caused by sporozoa of the genus Plasmodium, four species of which infect humans: P. falciparum, P. vivax, P. ovale, and P. malariae. The malaria parasites undergo a developmental cycle in the female anopheles mosquito, which is the vector. They are transmitted to the human host following a bite by the mosquito, rapidly enter the liver where they undergo a developmental phase of varying duration among the four species (pre-erythrocytic phase), and then enter the red blood cell (intra-erythrocytic phase) where they continue their multiplicative cycle. The asexual erythrocytic parasite is the stage in the life cycle that causes disease. This is characterized by fever, chills and sweats (which vary in periodicity among the different species), anaemia, enlargement of the liver and spleen [13].

Despite the clinical and epidemiological significance of the interaction between G6PD deficiency and malaria, the extent of its occurrence and consequences has not been properly measured. Screening and detection of G6PD deficiency helps in reducing such episodes, through appropriate selection of treatment, patient counselling, and abstinence from disease-precipitating drugs such as anti-malarials and other agents.

This was a prospective case study designed to assess the prevalence of G6PD deficiency among 200 children: made up of 120 (60%) males and 80 (40%) females aged 0-5 years that are admitted or presented with Plasmodium falciparum malaria in the selected hospitals from March 2015 to May 2015. Written informed consent was obtained from parents/guardians after counselling. Ethical clearance was obtained from the Heath Research Ethical Committee (HREC), Ministry of Health Katsina State, Nigeria.

About 2.0mls of venous blood samples were withdrawn from each child positive for Plasmodium falciparum malaria. The samples were collected in EDTA (ethylene diamine tetra-acetic acid) tubes and transported immediately in ice-cooler box to the Laboratory Department of General Hospital Dutsin-ma for screening of G6PD enzyme deficiency.

The activity of G6PD enzyme was measured qualitatively using commercially available G6PD screening test kit (Biorapid Diagnostics Nig. Ltd.) according to manufacturer’s instructions. In normal subjects decolorization time is up to 60 minutes while for G6PD deficient subjects is approximately 2-24 hours.

The G6PD deficient samples were subjected to molecular analysis for the detection of G202A gene. Genomic DNA from patient EDTA blood samples was extracted using E.Z.N.A.® Blood DNA Mini kit (Omega Bio-tek, Inc. Norcross, USA) according to the manufacturer’s instructions. The specific primer for the PCR and DNA sequencing of G202A variant were5’- TACAGTCGTGCCCTGCCCT -3’ (Forward) and 5’- CCGAAGCTGGCCATGCTGG-3’ (Reverse) of 212 base pair length.

The DNA sequencing of the amplified PCR products of G202A gene were performed by the Dideoxy/Chain Termination method using the automated cycle sequencing based on Sanger’s principle, CEQTM 200XL DNA Analysis System by BECKMAN COULTER Company, was used to sequence the PCR products [14].

The sequence data obtained from electropherogram were analysed using the bioinformatics tools from NCBI webpage. The BLAST tool was used to find Single Nucleotide Polymorphisms (SNPs) in sequences from the CEQTM 200XL DNA Analysis System by BECKMAN COULTER Company. Using the NCBI BLAST service to map variations on genome and genome assemblies enables the query alignments to be examined graphically because the graphical sequence viewer pos along with the BLAST report [15].

Of the 200 children positive for Plasmodium falciparum malaria, 32 (16%) were found to have G6PD enzyme deficiency. The successful PCR amplification of G202A variant is shown in figure 1. 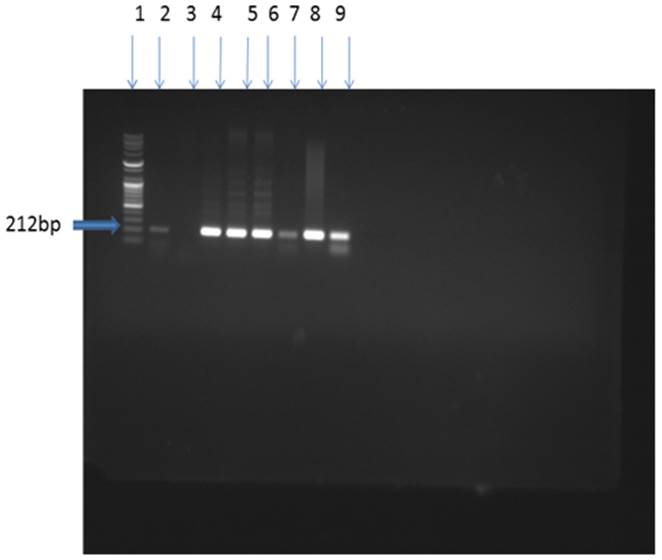 In sequence analysis of G202A result using the genomic DNA from the blood of children with G6PD enzyme deficiency in the selected hospitals in Katsina State, we were able to obtain a full-length G202A gene.

Comparison of the nucleotide sequence obtained with that of other obtained from different source (GeneBank) revealed nucleotide differences of Guanine (G) being replaced with Adenine (A) (figure 2) that correspond to position 68 of the amino acid with 97%homology.

The nucleotide sequences obtained from the sequenced genes are 97% homologous to other G6PD genes of different strains from bioinformatics analysis and show a Guanine to Adenine mutation at amino acid number 68 substitution of valine to methionine. The G202A mutation does not appear to have a role in G6PD deficiency among children in the selected area of Katsina state.

This study has shown a high prevalence of G6PD deficiency among children with Plasmodium falciparum malaria residing in Katsina State, North-western Nigeria. The G202A gene was shown to occur in both the 2 sample sequenced (1 deficient and 1 normal) and it was not statistically significant (p>0.05), though our findings were limited by the small sample size.

The authors are grateful to Heath Research Ethical Committee (HREC), ministry of health Katsina state, Nigeria and staff of all the selected Hospitals (General Hospital Dutsin-ma, Katsina, Daura, Baure, Funtua and Malumfashi) in the state for their sacrifices and services rendered.