Abstract: This research offers an innovative way to reduce the speckle noise which associated with the ultrasound imaging. This in turn leads to improving the input image and raise the human diagnostic performance. It uses an Undecimated Wavelet Transform UWT to decompose the image signal to the coefficients, to take the diagonal coefficient and applied Independent Directional Mask after replacing the value of each pixel in this coefficient with the corresponding pixel in the original image, this result yields after applying median filter in case the value of the pixel is smaller than the threshold value which is pre-specified. Then we apply the Smoothing Directional filter and re-directed the formation of the new diagonal coefficient, and then make the inverse undecimated wavelet transform IUWT to form the resulting image after reducing the noise of it (De-speckled Image). The used method showed a clear improvement on several ultrasound images via traditional statistical measurements (PSNR and MSE) and outperformed the other methods which used in common to reduce the speckle noise.

The ultrasound images are the less quality and contrast between all medical images kinds. This yields because the type of noise which appears as black and white spots known as Speckle Noise. Many researchers relied on different ways, but most of them depending on wavelet transform [1] [7] [9] [11] [20]. This is because of its efficient properties specially the De-Correlation property of the components of the image with the high and low frequency content. Some researchers have used different techniques for the decomposition to get (Sub-bands) details and approximate information [8] [14]. Others use a different wavelet type than the default wavelet i.e. Haar wavelet type [5]. The researcher Mondal resorted to several decomposition levels, reaching the third level [6]. As well as the varied methods and techniques used in wavelet transform Thresholding ranging from traditional techniques Hard / Soft Thresholding [3] [15]. And Shrinkage techniques based on Gaussian distribution for resulted coefficients [3] [20]. But some researchers use filters as a Weiner Filter with wavelet transform [1] [17]. Others work on the integration of Filters with each other in order to reduce the amount of noise as a Mean (Average) Filter with Median Filter [4] [19]. Some used the Homomorphic Filtering to convert Speckle noise (Multiplicative noise) to Additive one [2] [13] [16].

2. Research Objectives and Its Methods

Reduce Speckle noise works to improve the ultrasound image in terms of visual appearance and this in turn raises the performance of medical diagnosis. And reduce this type of noise described as Multiplicative noise (multiply with an image signal) is important and difficult to prepare at the same time. We used undecimated wavelet transform UWT, Directional Dependent Masks DDM, and Directional Smoothing Filters DSF.

Undecimated wavelet transform looks like Discrete Wavelet Transform DWT, but it does not contain Down-Sampling operations, which is not to reduce the level of components (Approximation and Details coefficients) resulting from the decomposition of each level. Therefore, all of the generated coefficients will have the same size of the original signal, either when we rebuild the signal (reconstruction phase), we raise the level of components (via Up-Sampling operations), and it will work to expand the signal length (Dilation), and therefore that the signal will decrease the accuracy with increasing decomposition levels. Figure 1 illustrates how the decomposition of the input signal up to the third level.

The lack of down-sampling operations maintains the input image information, and therefore does not get any loss of data in the decomposition phase otherwise DWT [22].

To determine whether there are Edges on the pixels that have been classified as high-level Pixels, we are using the mask based on the Direction (Direction Dependent Mask DDM) as in Figure (2), and here in case one of the dark squares in this mask containing at least one high-level pixels, then we replace the value of this pixel of the other to be adopted according to the research plan.

Edges are usually blurred when we trying to remove noise spots (Despeckling), to protect those edges of Blurring we use Directional Smoothing Filter DSF [21]. This filter algorithm work as the following: 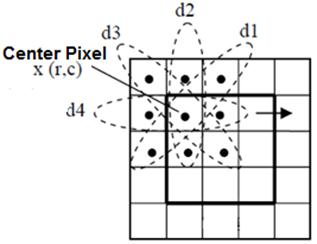 After that we find V1 (n) by equation (4), as follows: Directional Dependent Mask and Directional Smoothing Filter:

Where x (r, c) is the central pixel of the mask. Finally we try to find index V1 (n), which gives smaller value.

Replace the value of the pixel x (r, c) value of v (Index). Then Repeat the procedure until the entire image had been scanned by this mask.

We have implemented a series of steps on several ultrasound images. Figure 4 is the block diagram of proposed method.

Where we apply the Wiener filter and Median Filter on the input image A, and the resulting images are B and C respectively. After that we apply undecimated wavelet transform UDWT on the three images A, B, C. and then we take the diagonal coefficients containing noise resulting from the level of the first decomposition level HH1, we calculate the threshold value corresponding to the average value for HH1 sub-band, we replace all Pixels which their values less than the resulted threshold value (Low-Level Elements) with the corresponding elements in the C Image. as the following figure shows. 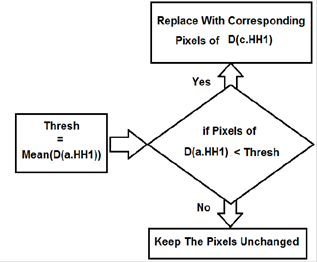 After that we apply the Directed Dependent Mask which simulates the diagonal direction for each of the resulting image from the previous phase and image B, replace all pixels under the shaded elements in the directed mask which have the smaller value than the threshold value with the corresponding pixels in B image. as figure (6) shows. 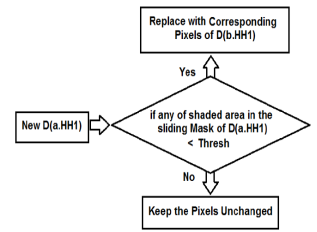 Then we apply the Directional Smoothing of the resulting image, and finally we use reverse wavelet transform IUWT to get the filtered image or noise-free (De-speckled) image.

We apply the proposed method on different fetal ultrasound images. as the figure 7 shows.

The application of previous steps on some ultrasound image to remove a large amount of noise denote that our method remove speckle noise efficiently, as figure 8 shows.

We remarks that when we increase the noise variance we decrease the PSNR measurement, although we still have the best performance via using this sequences of steps mentioned before. as the Figure (9) shows. 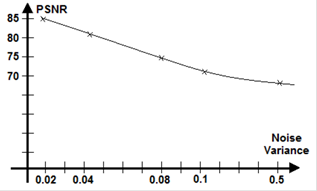 And Table 1 shows the significant improvement we get from the application of the proposed method on several fetus ultrasound images.

After we applied the common ways which they used to reduce speckle noise in ultrasound images, we found that our proposed method has given the best result. as Figure 10 illustrates. This sequences of steps success to remove big amount of speckle noise and overcome the rest of the other techniques (such as traditional thresholding i.e. Hard and Soft thresholding, or the different ways of Decomposition like Dual or Quad Tree WT). Besides of the techniques which depend on Gaussian Distribution of Wavelet Coefficients like Shrinkage algorithms (Sure, Oracle, Bivariate, Bayesian, Normal), and the other ways which relied on Homomorphic Filtering. Although Wiener Filter which it suitable for Additive noise (Gaussian Noise), as well as Median Filter which suffers from Blurring Effect when we apply it on noisy image.