Abstract: This paper proposes a new speed approach for the segmentation of the lung images in order to detect and extract the tumor region. The approach consists of two main stages, which are the preprocessing stage, marker watershed stage and the tumor detection stage. The preprocessing consists of laplacian filtering to enhance edges and make the next stages more efficient. The marker watershed step applies the Sobel gradient function on the foreground and background markers to get the possible tumor region. The post processing stage consists of tumor detection and segmentation in which the area of the tumor is calculated. The results are done on a medical lung database obtained from Tishreen hospital (in Lattakia, Syria) which consists of 59 images from 10 persons. The result shows robustness of the system in detecting and segmenting tumor region in different depths. The designed GUI supplies user with tumor region and area, and time of each stage.

Automatic cancer detection and segmentation are very important steps in medical image processing systems that facilitate the medical operations and play as second opinion beside the doctor decision.

Lung cancer is one of the most deadly diseases in the world. So, automatic lung cancer detection is an important topic in this field which has been taken very care at the last ten years.

Techniques used in this field are (local) thresholding, region growing, edge detection, ridge detection, morphological operations, fitting of geometrical models or functions and dynamic programming. On the other hand, there is another approach used in lung regions extraction process based on pixel classifications.

In 1993 Chiou et al. [1] designed an artificial neural network based hybrid lung cancer detection system, which was used to improve the accuracy of diagnosis.

Hayashibe et al. [2] proposed an automatic method based on the subtraction between two serial mass chest radiographs, which was used in the detection of new lung nodules.

In 2011 Sharma et al. [5] applied computer Aided Diagnosing (CAD) system for detection of lung cancer. This system generally first segments the area of interest (lung) and then analyzes the separately obtained area for nodule detection in order to diagnosis the disease, as result 90% sensitivity with 0.05 false positives per image.

Vivanti [8] proposed a fully automatic algorithm for lung tumor segmentation in follow-up CT studies that takes the advantages of the baseline delineation. They applied their system on 80 pairs of CT scan from 40 patients with ground-truth segmentations by a radiologist yield an average DICE overlap error of 14.5 %, a significant improvement from the 30%.

The suggested system consists of the following operations: 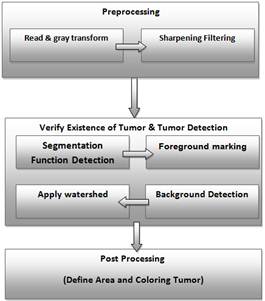 This stage includes two sub-stages which are transformation and sharpening.

- first we read image and transform it to the gray level as figure illustrates: 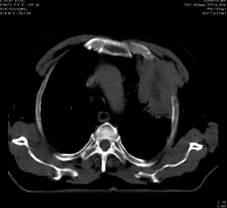 - second, sharpening filter is applied to enhance image and illustrates the edges. We suggests using two different filters which are Gabor and Lapalacian and we compare them at the result section. The gabor filter is band pass filter used to detect edges and defined as follows [10,11]:

where, s(x,y) is the complex sine function and is called carrier and given like this [10]:

u0,v0 are spatial frequencies. P the pahse of sine function.

while wr(x,y) is the Gaussian function and called the envelope and given like this [10]:

x0,y0 are the tops of function, a and b are scaling parameters, and r is the rotation parameter.

Figure 3-A illustrates gabor filtering on the input image.

Modified Laplacian function is another edge enhancement function at the spatial domain, its function is defined as follows [11,12]:

Figure 3-A shows Labplacian filtering on the input image.

The base difference between gabor and laplacian is that the first works on the entire gray levels while the second works only on the edges.

The enhanced image is then supplied to the next stage which is the tumor detection stage.

The first operation in detecting tumor is defining the segmentation function, which (in our algorithm) is the gradient magnitude and it has been done by Sobel filter.

Sobel filter is applied on vectors and rows, then the square root of results is calculated to get edges. Filtered images (Gx,Gy) of sobel and the resulted edges (G) are given as follows [12]:

The following images illustrates the sobel edges of enhanced image. 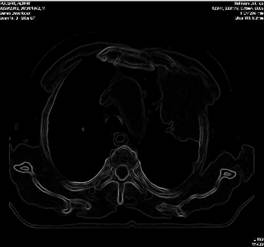 The foreground pixels are group of connected pixels defined by means of morphological operations as follows:

1- Applying opening operation by 20 pixel_size mask of type disk on the enhanced image. The mask and result image is illustrated in figure (5-A).

2-1 The first is closing operation on the previous opened image to remove the darkened areas of image (A). the figure (5-C) includes the closed image.

2-2 The second depends on two open and close operation as follows:

3- The maximum values in reconstructed image (5-D) is then calculated to get the foreground pixels as figure (5-E) shows. The pixels are then plotted on the enhanced image (fig 5-F).

4- In some cases the result foreground pixels are outlier pixels and must be filtered. To obtain that, the result connected components whose area is less than threshold () is removed (Fig 5-G).

The reconstructed open-close image is transformed into binary form (figure (6-A)). The black pixels is the background but these points shouldn’t touch the region of interest. So, we skeletonize the background area as figure (6-B) shows.

The watershed algorithm consists of two main steps which are:

-Fusion of the foreground and background markers images. So that the Sobel (segmentation Function) will give high values in these points and low values in the rest.

-Get the labeled matrix of the fusion image by means of applying the segmentation function (Sobel Filter) on that image.

The labeled image is colored to give each area a separate color. Figure 7 illustrates the response of watershed algorithm on an infected lung image.

The post processing consists of extraction the tumor region and calculation of tumor size.

To detect the tumor region, we take the labeled watershed image as input. First, we removed the very small regions which are noise, and can’t be the tumor. The threshold value for this stage is 400.

Second, the area of each region is calculated, and the area with small region is selected which should be the tumor.

Figure 9 illustrates the extraction of tumor region in a lung image.

The tumor size is calculated by summing the number of white pixel in each region of the tumor region.

The results section will include calculation of some tumor areas.

The results are done on a database from Tishreen-Hospital (Lattakia-Syria). It consists of 10 patients, with 50 CT scan images. The images are from different depth.

Figure 10 illustrates the segmentation of some database samples.

Figure 10. The segmentation of some database samples (A): filtered image (B) The segmented image.

The algorithm spends 0.372 seconds approximately to apply preprocessing and 1.77 seconds for marker watershed algorithm, while it takes 0.49 seconds.

The following table includes the result of detection of lung tumor and elapsed time for each phase.

Table 1. Result of detection of lung tumor and elapsed time.

It shows robustness against these criteria.

From above we can conclude that detection algorithm works well in different depths.

The results applied on 59 images from 50 images, the laplacian filter approach were better than gabor in detection and segmentation rates.

We designed a GUI in Matlab to facilitate dealing with Lung detection and segmentation system. GUI is supplied by functions to define tumor’s area and algorithm’s time. The figure 12 illustrates some examples of designed GUI after testing some samples.