Abstract: Hepatitis B virus (HBV) is the leading cause to liver disease, cirrhosis and primary liver cancer. About 1 million people die from HBV each year, which equates to about 2 HBV related deaths each minute. Depending on the virus sequence homogeneity as a minimum 10 genotypes (A to J) and numerous subgenotypes have been identified. Hepatitis B virus variants may be differ in their virulence, models of serologic reactivity, pathogenicity, response to treatment and global distribution. This study was carried out to detect HBV genotypes among Iraqi hepatitis type B patients in Wasit Province/ Iraq using nested PCR protocol. A total of 105 outpatients (65 males and 40 females, aged 1-95 years) clinically suspected as having viral hepatitis were included in this study. All the patients' sera (105 samples) were positive for HBV surface antigen (HBsAg) by ELISA screen test. Whereas 72 (60.5%) and 33 (31.4%) of these samples were positive and negative for HBV DNA, respectively, by first PCR. Survey of DNA positive samples for HBV genotypes by nested PCR (second PCR) demonstrated a unique results that no single genotype was found and all of these samples had mixed genotypes of which the pattern A+B+C+D+E was the most common (77.7%), followed by A+B+D+E (16.66%), A+B+C (2.77%), A+B+E (1.38%), and A+D+E (1.38%), whereas genotype F was not found in any patient. Statistically, there was non-significant difference in distribution of genotypes among males and females. The presence of mixed infection with about 5 HBV genotypes among most of our patients lead us to conclude that these patients are incurred to different sources of infection at different times and this required an epidemiological evaluation of HBV infection among our patients not only in Wasit Province but also all over Iraq to control this abnormal acquisition of these genotypes by Iraqi people.

Hepatitis B virus (HBV) is a causative agent of significant infectivity and death around the world [1]. About 2 billion of human beings have been infected with HBV and >240 millions suffering from chronic hepatitis B (CHB), while 600,000 of patients pass through acute hepatitis B (AHB) and CHB yearly [2]. According to a global surveys more populations die in a day from CHB than AIDS in 1 year and yearly 1 million of peoples die from HBV related viral illnesses [3].

Eight genotypes of HBV were classified depending on difference in >8% of total HBV genome (A-H), some of them separate into sub genotypes with genetic difference of 4%-8%. Also, 2 genotypes were newly identified (I and J) [4]. These genotypes have been shown to have a distinct geographic distribution [5]. Genotype A is found mainly in North America and Northwest Europe [6]. B and C genotypes are highly prevalent in Australia and Asia [7]. Genotype D is worldwide in distribution with highest prevalence in the Middle East and Southern Europe, genotype E is almost entirely restricted to West Africa, F genotype in Central and South America [8]. Genotype G has been reported in the United States, Germany and France [9]. Genotype H was recently identified in patients from Central America [10]. Genotype I was reported in Italy, Laos and Vietnam, while the newest genotype J has been recognized in Ryukyu island in Japan [4].

Hepatitis B virus genotyping is an important technique to explain the way and pathogenesis of the virus [11, 12]. In Iraq, several studies on HBV prevalence and genotyping were carried out, whereas In Wasit Province, to our knowledge, there is no previous study dealing with genotyping of HBV, so that this study was conducted for molecular detection of HBV and determination of this virus genotypes (A-F) using nested PCR protocol.

A total of 105 patients clinically suspected as having viral hepatitis were enrolled in this study. Of these patients, 40 were females (aged 13-95 years) and 65 were males (aged 1-73 years). These patients were outpatients attending Alkarama Teaching Hospital and Central Health Laboratory in AL-Kut City/Wasit Province/Iraq during the period from1 October 2015 to 15 February 2016. Each patient's information included only gender and age. Unfortunately, we couldn't obtained any information about the history of infection, treatment, and other family members' infection as a result of inability to meet these patients and inavailability of patients' records in these hospitals.

No formal ethical approval was obtained to use the clinical samples, because they were collected during routine laboratory analyses in public hospital and the data were anonymously analyzed. This work was approved by Wasit Health Administration/ Wasit Province/ Iraq. Therefore, consent from the patients was not required.

From each patient single blood sample (5 ml) was drawn by venepuncture using sterile 5ml syringe. The blood was located in clean tube and the tubes were left to stand at room temperature (18-25°C) for 15 minutes to coagulate. Serum was separated from blood by centrifugation at 3000 rpm for 5 minutes and divided into aliquots of (300 µl) and stored at -20°C till use. Every aliquot of serum was used one time to avoid sample decay because of repeating freezing and thawing cycles.

Serum samples were added according to the designation on the ELISA working sheet (CTK, USA).

Detection of HBV DNA and genotypes was accomplished by nested PCR according to Naito et al. [11] using specific primers. The following steps were carried out:

DNA extraction was done according to the manufacturer's instructions (Anatolia gene work, Turkey).

Hepatitis B virus DNA was detected by the amplification of pre-S1 through S gene by using universal primers for genotypes A-F (Table 1). The total volume of the reaction mixture was 50µl: 43 µl sterile distilled water, 1 µl (25 pmole) each of P1 and S1-2 primers, and 5 µl of DNA sample, all of which were added to the tube of lyophilized master mix (Bioneer, Korea), then the mixture was centrifuged at 8000 rpm for 1 second.

Thermal cycler was programmed to first incubate the samples for 10 min at 95°C, followed by 40 cycles consisted of 94°C for 20s, 55°C for 20s, and 72°C for 1 min and final extension at 72°C for 10 minutes. PCR products were electrophoresed in a 2% agarose gel and stained with ethidium bromide. The PCR bands were then visualized by UV light. Positive samples of first product were estimated according to the migration pattern of 100 bp DNA ladder.

The six nested PCR primers for HBV genotypes A-F (Table 1) were made up according to the conserved nature of the nucleotide sequence in the pre-S1 regions through S gene. The genotypes of HBV were determined based on the differences in the size of the amplified DNA bands.

Statistical analysis was accomplished according to Ross [13] using Chi-square test (χ2), this statistical method was used to detect the significant statistical relationship between variables and the results being considered as statistically significant when a p-value was less than 0.05.

In this study 105 patients, clinically suspected as having HBV infection, firstly were surveyed for HBsAg by ELISA screen test to diagnose their infection with HBV. All of these patients (100%) were positive for HBsAg (Table 2).

This study included 105 samples which were tested by PCR technique for HBV DNA by using type specific primers (Figure 1). Seventy two samples (60.5%) were positive for HBV DNA, while 33 (31.4%) were negative (Table 3). 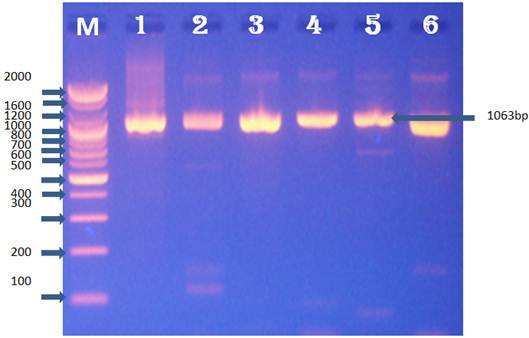 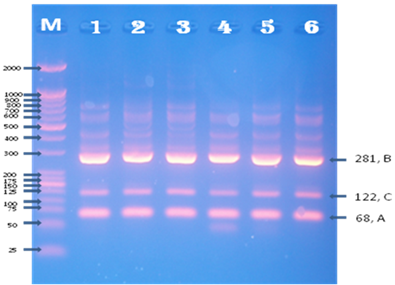 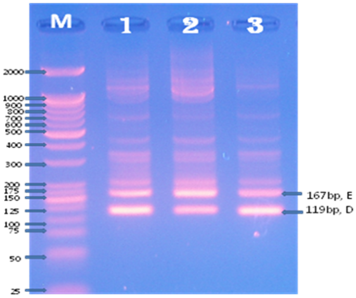 In order to certify that these bands were not primer dimmer or unspecific bands due to presence of several primers in the mixture, the specific genotypes primers (mix A) set were put individually in the PCR mixture for the same sample (positive sample for genotypes A+B+C) to perform simplex PCR. The results showed bands of the same expected size for each HBV genotype as in the multiplex PCR (Figure 3). 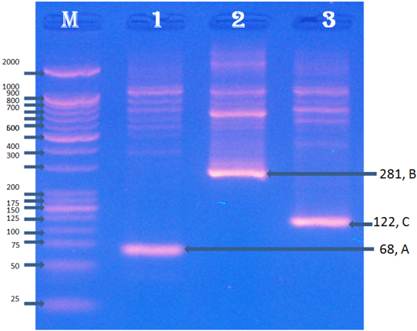 Among this study included patients, mixed infection with five genotypes (A+B+C+D+E) was the most predominant ((77.7%: 92% for females and 70.2% for males), followed by genotypes A+B+D+E (16.6%). Genotypes A+B+C were not detected in females while 2 (4.2%) were detected in male patients (Table 4). The less prevalent mixed genotypes detected were A+B+E (4% in females versus 0 in males) and A+D+E (0 in females versus 2.1% in males). Statically there was non-significant difference in distribution of genotypes among males and females.

Identification of HBV by PCR using type specific primers revealed that 72 samples (60.5%) were positive for HBV DNA, while 33 (31.4%) were negative. Although, all of this study included samples (n=105) were positive for HBsAg by ELISA screen test, 33 of them were negative for HBV DNA by PCR technique. This difference did not exclude the presence of infection with HBV in these 33 patients as HBsAg is considered the key of HBV serological markers in diagnosis of the infection [14, 22]. This means that these 33 patients may be chronically infected with HBV and are in the non-replicative phase as the natural course of chronic HBV infection comprises four phases all of them are HBsAg(+ve) [23, 24]. Predominantly patients in the non-replicative phase are characterized by seroconversion of HBeAg to anti-HBe, very low or undetectable serum HBV DNA levels (usually <2000 IU/ ml) and normal serum aminotransferases (approximately 40 IU/ml) conferring a favorable long-term outcome due to immunological control of the infection [3, 25, 26]. Similar results were obtained by Khaled et al. [19] who found from 140 HBV infected patients (all of them were positive for HBsAg) only 100 patients were positive for HBV DNA.

Numerous methods of HBV genotyping have been developed of which direct sequencing of HBV genome is the mainly accurate technique [27]. Another genotyping method established was nested PCR amplification technique by using type specific primers which can recognize 6 major genotypes (A-F) of HBV [11]. As in Asia A, C and D genotypes were the most predominant [28], we concentrated in this study on detecting these 6 major genotypes among our patients using nested PCR technique developed by Naito et al. [11]. In addition, comparison of this method with other techniques of genotyping for example RFLP, this method appears to have a higher sensitivity of recognition and have high ability in distinguishing HBV genotypes. Also, the sensitivity of this method in detection of HBV DNA is 102 copies/ml [29].

Seven genotypes (A-G) were determined in Asia, of which A, C and D were the most predominant, whereas in Europe and Africa A, C, D and G genotypes were detected. Mixed genotypes A+C and C+D were the predominant in Asia, while C+D in Europe and A+D in Africa [28]. The high prevalence of mixed infections among this study included patients revealed multiple incurrence of these patients to different HBV genotypes, and indicated high endemicity of genotypes A, B, C, D, and E in our community. Worldwide, the most vulnerable individuals to mixed infection with different HBV genotypes are the IVDUs as it was reported by Chen et al. [42]. The probability of presence of IVDUs among our patients is possible, especially, 44.7% of these patients were within the young age group 21-40 years (not published data) who are more likely to be drug abusers but not investigated by us or other Iraqi researchers as talk about these subjects is not allowed socially in our community. In Iraq, drug abuse increased with the invasion of Iraq in 2003 and still a growing problem. Other possibility of the presence of mixed genotypes was recombination between genotypes as explained by Chen et al. [42] but this possibility was not investigated here. Other Iraqi researchers [30] in Northern Iraq explained that the high prevalence of mixed infections in their study may be due to "the migration of a large number of Kurdish people as refugee to Europe and America and remaining in the refugee camps for long periods, in which communication with people of different countries might cause transmission of infection with different genotypes. In addition, low level of education about the way of disease transmission in kurdistan, negligence of sterilization in the dental clinics and negligence of using disposable materials in makeup and hairdresser salons may be other predisposing factors to HBV infection in our community.

The presence of mixed infection in both males and females with about 5 HBV genotypes among most of our patients lead us to conclude that these patients are incurred to different sources of infection at different times and this required an epidemiological evaluation of HBV infection among our patients not only in Wasit Province but also all over Iraq to control this abnormal acquisition of these genotypes by Iraqi people. Also, a clinical assessment and follow up of such patents is required.