Abstract: Present investigation was carried out to study the fungal decolourization of azo (Acid red) and anthraquinonic (Basic blue) dyes by the fungus Aspergillus flavus. Decolourization of tested dyes was observed visually and studied through spectrophotometric analyses. Growing fungal cultures were filtered through Whatman filter paper No. 1 and filtrates were centrifuged at 6000 rpm for 5 minutes and supernatant was used for spectrophotometric observations, at absorbance 494 nm and 630 nm, for Acid red and Basic blue dyes, respectively. Decolourization/degradation was recorded by calculating the degradation percentage, using initial and final absorbance of the respective dye. The applied fungal species was found to be able to decolourize the mentioned dyes, as revealed by spectrophotometric analyses which showed a gradual decrease in the initial absorbance and increase in the mycelial yield of the used fungus. Decolourization/ degradation of dye were recorded to be 62%, for Basic blue and 77% for Acid red.

The dyestuff, textile, paper and leather industries and another major producers and users of dyes, produce effluents that are usually resistant to the biological treatment. The degradation of these industrial wastes, especially the textile wastes, is a major problem to the environment. Textile dyes are mainly classified as azo, diazo, cationic, basic, anthraquinonic and metal complex dyes based on the nature of their chemical structure. Azo dyes constitute a major class of environmental pollutant and known to be highly toxic and mutagenic to the living organisms [1]. Untreated textile effluents and inefficiency of the dyeing process or poor handling of spent effluent for wastes of dyestuff industries lead to dye contamination to the soil and natural water bodies [2]. These dyestuffs affect the photosynthetic activity in aquatic flora by reducing light penetration intensity as well as toxic to aquatic organisms [1]. Mutagenic, carcinogenic and toxic potential of textile effluents have also been extensively studied [3, 4].

Current wastewater treatment systems are mainly based on physical and chemical procedures such as absorption, coagulation-flocculation, oxidation, filtration, electrochemical methods. Although these methods are effective, there are also some disadvantages and limitations whereby they suffer from such shortcomings as high cost, formation of hazardous byproducts, operational problems and intensive energy requirements. Therefore, a better and eco-friendly alternative biological process is getting more attention due to its feasibility [5]. The biological processes or microbial treatments have also been suggested to enhance the bio-degradation of textile dyes due the low cost and easy to use [6]. Microbial decolourization and degradation of hazardous dyes and effluents has been in focus to treat the industrial wastes biologically [7]. Therefore, the present investigation was carried out to evaluate the potential of the fungus Aspergillus flavus for decolourization/degradation of Azo (Acid red) and Anthraquinonic (Basic blue).

The fungus Aspergillus flavus was used for the decolourization of Azo (Acid red) and Anthraquinonic (Basic blue) dyes, which are extensively used in textile industry. Dyes stock solutions (1%) were prepared separately by dissolving dyes into distilled water.

Five to seven days old cultures of fungus A. flavus, grown on Potato Dextrose Agar (PDA, Himedia), were used in the preparation of spores suspension. The spores were harvested in Tween 80 (Sigma-Aldrich) and adjusted to 1x108/ml. Growth was measured in terms of dry weight of mycelium after filtration through Whatman filter paper No. 1 and drying overnight at 80°C for 24 hour [8].

Experiments were performed with Potato Dextrose Broth (Himedia). The medium was prepared by dissolving the ingredients in 1% dye stock solution replacing distilled water and autoclaved at 121°C for 16 minutes. Further procedures were followed according to Singh and Singh [8].

Decolourization of dyes were observed visually and measured spectrophotometrically using the Varian Cary 8 Spectrophotometer within the wave length range 250-700 nm, by measuring the absorbance at 494 nm for Acid red, and 630 nm for Basic blue. The spectrophotometric measurements were carried out after an interval of 24 hours of incubation following Singh and Singh [8].

Percentage of dye decolourization/degradation was calculated according to Awaluddin et al. [9], as:

The statistical analysis were carried out for all experiments and standard deviation (SD) was calculated, and given as mean ± SD values in representation [10]. All experiments were done in triplicate under identical conditions.

The data of the growth (mycelial dry weights) along with spectrophotometric analyses for quantitative assessment on dyes decolourization/degradation are summarized in Tables 1 and Table 2. Relying upon the data, it is clear that the applied fungus A. flavus was efficient to decolourize the tested dyes, as indicated by the decreased absorbance and increased mycelial weights. Visually a gradual decrease in colour intensity was observed that was found almost directly proportional to the incubation period, as shown in culture filtrates (Figure 1 A and B), and mycelium growth (Figure 2 A and B). 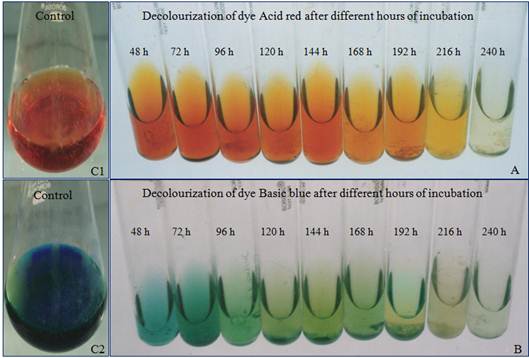 Figure 1. Culture filtrates showing the gradual decolourization/degradation of tested dyes; Acid red (A) and Basic blue (B) after different hours of incubation in respect of their controls C1 and C2, respectively. 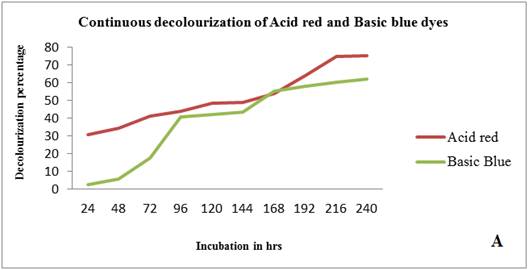 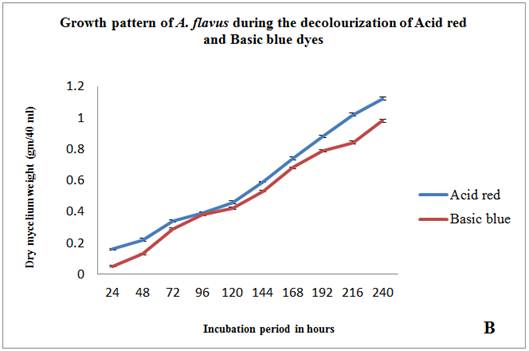 Figure 2. Dyes decolourization/degradation (A) and growth pattern (B) of the fungus A. flavus during the study.

The results summarized in Table 1 and Table 2, clearly indicates that applied fungus A. flavus is positive to degrade/decolourize the tested dyes Acid red and Basic blue. Microbial degradation of Congo red, Bromophenol blue, Acid red and some others textile dyes by the fungi, A. flavus and T. harzianum have been studied earlier [11-12, 8]. Abadulla et al. [13] reported that the anthraquinonic dyes decolourize faster than the azo dyes by Trametes hirsuta. In the present investigation, comparatively a higher percentage of degradation of azo dye (i.e. 77%, in Table 1) was also recorded. Muthezhilan et al. [14] also found some species of genus Aspergillus, positive for the biodegradation of dyes; Methylene blue, Gentian violet, Crystal violet, Cotton blue, Sudan black, Malachite green and Methyl red, in liquid medium.

The microbial decolourization/degradation of dyes also depend upon the structure of dyes and nature of extracellular enzymes, produced by the involved fungi. Knapp et al. [15] reported that adsorption of dyes to the microbial cell surface is primary mechanism of decolourization. In present investigation, fast degradation of dye Acid red might be due the adsorption of dye through fungal hyphae as well as enzymes production by the applied fungus. Howksworth et al. [16] observed that extracellular radical-generating enzymes by fungi are responsible to decolourize the azo and anthraquinonic dyes. Heinfling et al. [17] found 95% colour removal of azo and phthalocyanine dyes by Bjerkandera adusta and T. versicolor. In the present study, it was assumed that the decolourization of dyes was due to the adsorption of dyes by the fungal mycelium that is proved by the changed colour of fungus mycelium during the decolourization process in the culture, as it turned into red and blue, in respective dyes. Wong and Yu [18] also reported the adsorption of Acid green 27, Acid violet 7 and Indigo carmine dyes on living and dead mycelia of Trametes versicolor. Although, dye degrading enzymes were not isolated in the present investigation it is assumed that the rapid and higher decolourization of dyes (Tables 1 and 2; Figures 2) was due to the adsorption of tested dyes as well as involvement dye degrading enzymes that were attributed by the applied fungus A. flavus. Gold et al. [19] reported that fungal extra cellular enzyme manganese peroxidase is actively involved in decolourization. The species of Aspergillus are known to produce dye degrading enzymes, laccase and peroxidase [20-22]. Saranraj et al. [23] reported the degradation of azo dyes and textile effluents by some species of Aspergillus. Vyas and Molitores [24] found that lignin degrading enzymes such as lignin peroxidase (LiP), manganese-dependent peroxidase (MnP) and laccase also decolourize the dyes. Kim and Shoda [25] purified and characterized the novel peroxidase (Dyp) from Geotrichum candidum Dec 1 that is responsible for the dye decolourization. In present study, the increasing fungal biomass may provides a good surface area to absorb the dye contents easily as well as produced fungal enzymes helps in decolourization/degradation of tested dyes in growing cultures of fungus A. flavus. It is also assumed that the growing fungal mycelium was potent enough for the adsorption and to produce sufficient enzymes required for the degradation of tested dyes and shown a higher percentage of dye degradation (Figure 2A).

Authors are thankful to the University of Delhi for providing financial support and necessary facilities. Technical help provided by Mr. S. K. Dass and Mr. Suresh Vig is gratefully acknowledged.