Tissue engineering is an interdisciplinary area that uses cells, materials, engineering and life sciences toward the design and fabrication of biological substitutes that restore, support, or improve tissue or a whole organ function. Biomedical implant scaffolds are an excellent example of tissue engineering substrates composed of biodegradable polymers or inert materials coated with bioactive biomaterials which allows growth of new tissues of particular types of cells [1,2]. Biomaterials need to be properly modified by introducing controlled porosity, design of three-dimensional structure and surface modification to achieve better cell packing and control cell network architecture [3-8]. The biomaterial scaffold should have biodegradable and biocompatible nature. After the formation of the new tissue, polymeric scaffolds are slowly degraded into small molecular weight compounds, which was absorbed by the body or excreted out of the body [9].

In last few years hunt for new classes of biomaterials, with specific properties to be used as scaffolds for tissue engineering, has attained great interest, like cellulose, polyhydroxyalkanoates, polylactates and blends of these polymers [10-15]. Recently few cellulose polymers have demonstrated excellent three-dimensional structure, water retention, high mechanical strength and biocompatibility which enable their usefulness for skin tissue regeneration [16,17]. For example, one of the cellulose derivative bacterial cellulose has shown great potential due to its biocompatible and hygienic nature perfectly cater to the specific demand of wound tissue repair. Methyl cellulose (MC) being a derivative of cellulose family is one of the popular polymer where the –OH group are replaced by methoxyl group [18]. MC was used to prepare hydrogels by crosslinking with dialdehyde in presence of a strong acid. MC is biodegradable in nature, and popular for many biomedical applications such as drug delivery [19] and wound healing [20]. On the other hand EC is a hydrophobic polymer used as sustained release carrier; and commonly used in drug and biomedical industries for its high biodegradability and biocompatibility [21]. However, hydrophobic nature of EC and low mechanical strength of MC matrices lowers its applicability as biomaterials and tissue engineering applications. Therefore in the present work an attempt has been made to modify the properties of these cellulosic polymers (EC and MC) by biofield treatment.

It is already established that electrical currents coexist along with the magnetic field inside the human body [22]. Mr. Trivedi has the ability to harness the energy from environment or universe and can transmit into any object (living or nonliving) around this Globe. The biofield treatment has significantly enhanced the atomic and thermal properties of metals [23-26]. Additionally, the biofield treatment is known to alter the characteristics of many things in other research fields also such as, microbiology [27-29], agriculture [30-33] and biotechnology [34].

By considering above mentioned excellent results outcome from biofield treatment an attempt has been made in this work to study the physical, chemical and thermal properties of EC and MC.

Ethyl cellulose and Methyl cellulose were procured from Sigma Aldrich, USA. The sample was divided into two parts; one was kept as a control sample, while the other was subjected to Mr. Trivedi’s biofield treatment and coded as treated sample. The treatment group was in sealed pack and handed over to Mr. Trivedi for biofield treatment under laboratory condition. Mr. Trivedi provided the treatment through his energy transmission process to the treated group without touching the sample. The control and treated samples of EC and MC were characterized by FT-IR, CHNSO, XRD, DSC and TGA.

The infrared spectra of control and treated EC and MC were recorded with Fourier Transform Infrared (FT-IR) Spectrometer, Perkin Elmer, USA. FT-IR spectrum was recorded in the range of 500-4000 cm-1.

XRD of control and treated EC and MC were analysed by using Phillips Holland PW 1710 X-ray diffractometer system. The wavelength of the radiation was 1.54056 angstrom. The data was obtained in the form of 2θ versus intensity (a.u) chart. The obtained data was used for calculation of crystallite size using the following formula.

Where λ is the wavelength, k is the equipment constant (0.94) and b is full width half maximum (FWHM) of peaks.

The control and treated polymers (EC and MC) were used for DSC study. The samples were analysed by using a Pyris-6 Perkin Elmer DSC on a heating rate of 10°C /min under air atmosphere.

Thermal stability of the control and treated EC and MC were analysed by using Metller Toledo simultaneous thermogravimetric analyser and differential thermal analysis (DTA). The samples were heated from room temperature to 400°C with a heating rate of 5°C/min under air atmosphere.

FT-IR spectroscopy was used to evaluate the influence of biofield treatment on chemical nature of EC and MC (Fig. 1). FT-IR of EC showed characteristic peaks at 2974 cm-1 and 2869 cm-1due to C–H stretching vibration peak. The –OH stretching vibration peak was observed at 3485 cm-1 in the control EC. The other important peaks at 1091, and 1373 cm-1 corresponded to C-O–C stretching and C–H bending respectively [35]. The FT-IR spectrum of treated EC sample showed important peaks for –CH stretching at 2873, 2976 cm-1 and –OH stretching peak was evidenced at 3485 cm-1. Vibration peaks at 1066 and 1375 cm-1 were mainly due to C-O–C stretch and C–H bending, respectively. The result showed that C-O-C stretch present in control EC at 1091 cm-1 was shifted downward to 1066 cm-1 in treated EC. Hence, it is assumed that biofield treatment may reduce the bond strength and force constant of C-O-C bond with respect to control.

FT-IR spectrum of MC showed a typical peak at –OH stretching vibration peak at 3413 cm-1 [36] and C–H stretching vibration peaks at 2902 and 2835 cm-1 [37]. C–O carbonyl stretching peak was observed at 1647 cm-1 and ring stretching was observed at 948 cm-1 (Fig. 2). Additionally, the peak at 1373 cm-1 corresponded to MC C–H bending. However, the FT-IR of biofield treated MC sample showed a downstream shifting of C-O group stretching (12 cm-1) peak at 1647→1635 cm-1 in the sample. Moreover, an upward shifting in –OH group stretching 3413→3475 cm-1 was observed in treated MC. The strength of bond considerably affected the energy of the covalent bonds on interactive species. Hence, it is presumed that biofield treatment may induce changes in bond strength and force constant of the treated MC with respect to control. 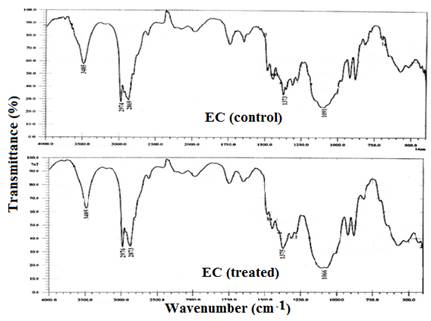 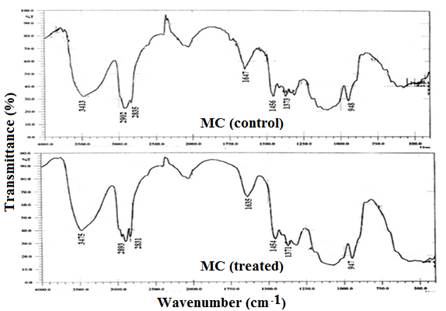 The elements present in polymers are presented in percentage. 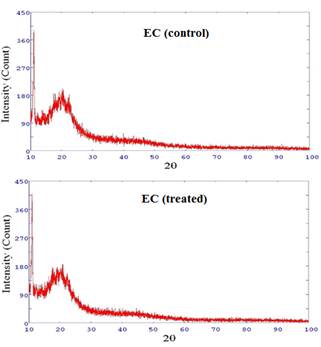 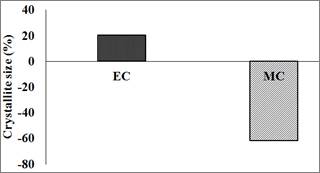 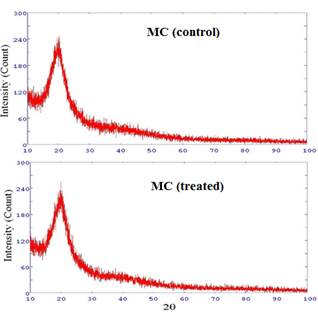 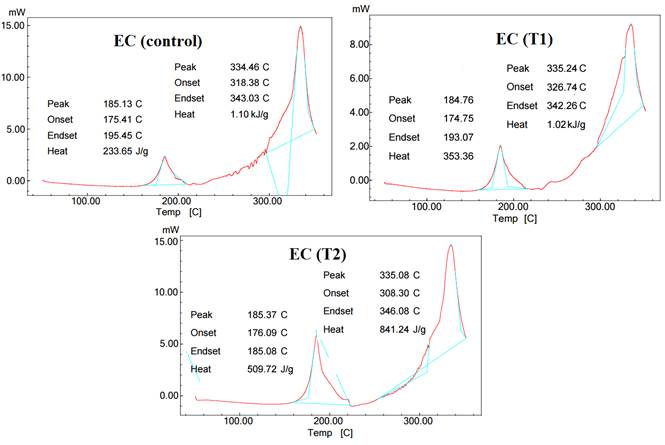 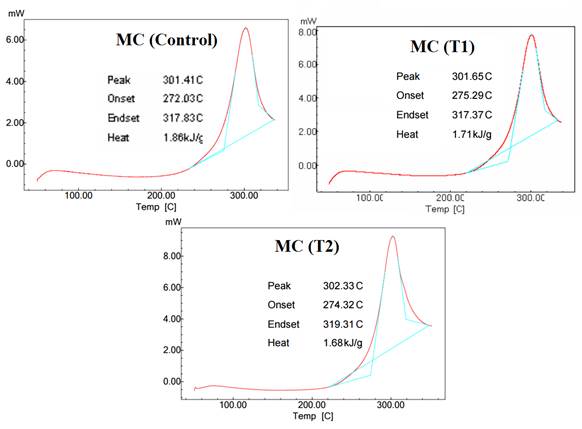 Thermogravimetric analysis is a tool to investigate thermal stability, oxidation, and vaporization of the polymer samples. TGA thermogram of control and treated EC samples T1, T2 are illustrated in Fig. 8. TGA thermogram of control EC sample showed one-step thermal degradation event. The sample started to degrade thermally at around 280°C and it ended at around 380°C. The EC sample lost 80.45 % of its original weight during this event. The Derivative thermogravimetry (DTG) of control EC showed maximum decomposition temperature (Tmax) at 321°C. The thermogram of treated EC showed similar single step thermal decomposition pattern. The treated EC (T1) started to degrade at around 300°C and ended at approximately 370°C, the sample lost 57.99% of its original polymer weight. The treated EC (T1) sample showed a considerable increase in Tmax (327°C) as compared to the control sample. 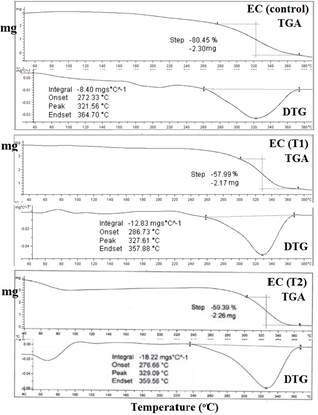 Whereas, the treated EC (T2) showed thermal degradation at around 302°C and degradation stopped at approximately 366°C. During this process T2 sample lost 59.39% of its weight. The DTG thermogram of treated EC (T2) showed Tmax at 329.09°C. The comparative evaluation of the Tmax showed increase in thermal stability of treated EC (T1 and T2) as compared to control. Szabo et al. showed that radiation treatment of poly (hexadecylthiophene) increases the thermal stability. They suggested that conformational changes in side alkyl chains of the polymer and crosslinking causes elevation in thermal stability [40]. Hence, it is presumed here that biofield treatment possibly caused conformational changes and crosslinking that increased the thermal stability. 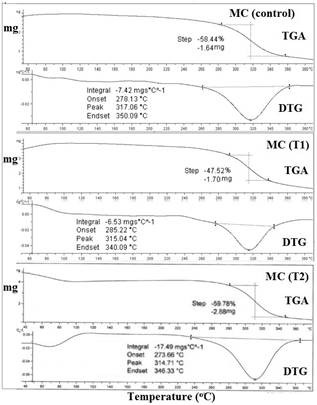 TGA thermogram of control MC and treated MC T1 and T2 are illustrated in Fig. 9. The representative TGA thermogram of control MC showed one-step thermal degradation. The thermal degradation commenced at around 280°C and terminated at around 360°C. During this thermal process the control MC lost 59.44% of its weight. DTG thermogram of control MC showed Tmax at 317.06°C. Whereas, the thermogram of treated MC (T1) showed similar thermal degradation mechanism. The treated MC (T1) started to thermally degrade at around 290°C and it terminated at approximately 338°C. The treated MC lost 47.52% of its weight during this process. The DTG thermogram of treated T1 MC (315°C) showed decrease in Tmax value as compared to control sample (317.06°C). The treated MC (T2) started to degrade at around 280°C and stopped at approximately 347°C. During this process the MC (T2) lost 59.78% of its polymer weight. DTG thermogram of MC (T2) also showed decrease in Tmax and it was observed at 314.71°C. This showed the decrease in thermal stability of MC T1 and T2 after biofield treatment. It is assumed that biofield treatment was unable to cause long range pattern in amorphous regions of MC, hence reduction in thermal stability.

The result showed significant effect of biofield treatment on physical, chemical and thermal properties of two important cellulose polymers such as EC and MC. XRD diffractogram of EC and MC (treated and control) revealed semi-crystalline nature of polymers. FT-IR spectral analysis of treated EC showed changes in C-O-C stretching with respect to control. However, the treated MC showed alteration in C-O and O-H stretching vibration peaks as compared to control. CHNSO analysis showed that biofield treatment has significantly changed the elemental composition (%H and %O) of the polymers. The treated EC showed substantial increase in crystallite size by 20.54% as compared to control. However, the treated MC showed decrease in crystallite size by 61.59% as compared to control. DSC thermogram of treated EC showed slight changes in crystallization temperature with respect to control. However, no crystallization temperature was evidenced in control and treated MC which might be due to amorphous nature of the polymer. Nevertheless, enthalpy of treated EC and MC was significantly changed after biofield treatment. TGA thermogram of treated EC showed a significant increase in Tmax which corroborates its high thermal stability. However, the treated MC showed reduction in thermal stability as compared to control. Overall, the result suggested that biofield treatment has changed the physical and thermal properties of EC and MC. Hence, it is assumed that treated EC and MC polymers could be used for biomaterial applications.

We thank Dr. Cheng Dong of NLSC, Institute of Physics, and Chinese academy of Sciences for permitting us to use Powder X software for analysing XRD results. The authors would like to acknowledge the Sophisticated Analytical Instrument Facility (SAIF), Nagpur for providing the instrumental facility. The authors would like to thank Trivedi Science, Trivedi Master Wellness and Trivedi Testimonials for their support during the work.