Milk is a complex medium containing a variety of nutrients, minerals, vitamins as well as other molecules of functional or bioactive properties [1]. Donkey milk is considered to be helpful in the treatment of human immune-related diseases; discovery of ass’ milk properties find its roots in antiquity, when doctors recommended it to treat several afflictions, due to its healing and cosmetic virtues; Cleopatra, Queen of Ancient Egypt, took baths in donkey milk to preserve the beauty and youth of her skin and used in the manufacture of soaps and moisturizers. Also it is been found that Hippocrates (460-370 BC) prescribed donkey milk for several purposes, such as liver troubles, infectious diseases, fevers, edema, nose bleeds, poisonings and wounds. Trichophyton mentagrophytes and T. rubrum are the common causal agents of tinea, [2] while, Candida species were frequently isolated as causative agents of catheter-related bloodstream infections. In the last years, great interest has been developed toward donkey milk, because of its high likeness to human milk and unique functional properties with low casein content and high percentage of essential amino acids. Because of that, recently it is considered to be a good alternative to infant formulas, since its nutrient composition, particularly the proteins, are very similar to those of human milk [1, 3]. Donkey milk contains a number of antimicrobial factors, especially milk proteins, which play a major role in milk protection. Enzymes, especially lysozyme, in donkey milk possess some unique characteristics such as bactericidal property which makes it different from other mammal milks [3, 4]. The antimicrobial activity of donkey milk was reported previously against Salmonella choleraesuis and Shigella dysenteriae [5].

Individual milk samples from different milk animals were collected from El-Minia and Fayoum governorates in Egypt. These milk types were; Buffalo, Donkey, Camel, Cow, Goat, and Sheep. Milk samples were collected immediately after milking in sterilized bottles and chilled in ice box to 4°C, then stored at -80ºC until using.

To evaluate fatty acids content of donkey milk, three analytical methods were used; DB- Wax, DB- 23 and HP- 88 methods [13]. Freeze dried milk samples (100 mg) were dissolved in 10 ml hexane, and then 100 µl of potassium hydroxide (2.0 N) was added. After centrifugation, clear supernatant was transferred into a 2.0 ml autosampler vial. The analyses were performed in an Agilent 6890 GC (University of Basilicata-Italy).

To polish the antimicrobial activity of lysozyme fraction, hydrolysis of donkey milk was carried out in two steps [14]. Initially, donkey milk was acidified with HCl to a pH 3.5, and then incubated with 2 mg/ml pepsin (Sigma) at 37°C for 2h. Then the enzymatic reaction was stopped by adjusting the pH to 8.0 with 0.5M sodium carbonate (NaHCO3) solution, followed by heating at 75°C for 5 min. The samples were cooled then kept at 4°C till used to determine the antimicrobial activity by agar disk diffusion method. As a control experiment, the lysozyme solution (2 mg/ mL) was subjected to the process described above without the addition of pepsin.

Antimicrobial activity of different milk types were assessed against fungal and bacterial strains by agar well diffusion method [15], [16]. For each bacterial or fungal strain, sterilized Mueller Hinton and potato dextrose agar medium were poured into sterilized Petri dishes, left to solidify at room temperature (25°C), and then swabbed from fresh bacterial or fungal culture strain. Wells in the centre of agar plate were created using a sterile cork borer (8 mm) and loaded by 250 µl of milk samples (concentrated to 50 folds by lyophilization and suspended in sterile water then pasteurized before tested). Plates with pathogenic bacteria or Candida albicans were incubated at 37°C and 30°C for 24h respectively. Other pathogenic fungi were incubated at 30°C for 48-72 h. The antimicrobial activity was determined by measuring the clear zones diameter (CZD) around each well in mm. Distilled water without test compounds was used as a control. Antibiotics such as Tetracycline (30 µg), Chloramphenicol (30 µg), Flucoral (fluconazole, 100 μg/mL) and Mycosat (nystatin BP, 100 μg/mL) were used as references for comparison in antibacterial and antifungal tests, respectively. All experimental procedures were performed in triplicates.

The MLC of donkey milk was determined according to the dilution method described [17], [18]. For pathogenic bacteria or Candida albicans, serial of two-fold concentrations of donkey milk (8, 16, 32, 64, 128, 256 and 512 mg/ml) were pipetted into tubes containing 4 mL of LB or potato dextrose broth medium, respectively. Each tube was inoculated with 0.4 mL (0.5 McFarland medium) of a standardized suspension of bacterial test species containing 1x106 cell/ml. For fungi, liquid media was inoculated with a fungus strain and incubated for approximately 48 h at 30°C. Subsequently, the culture was filtered through a thin layer of sterile sintered Glass G2 to remove mycelia fragments. The titer of spores of each fungus was determined microscopically using a hemocytometer. A suspension containing the spores was used for inoculation on PDA medium. Serial of two-fold concentrations of donkey milk were pipetted into tubes containing 4 mL of PD broth. Each tube was inoculated with 1x106 spores/ml.

a Each value represents mean of three replicats. b Diameter of inhibition zone (mm) was measured as the clear area centered on the agar well containing the sample, nd; not determined 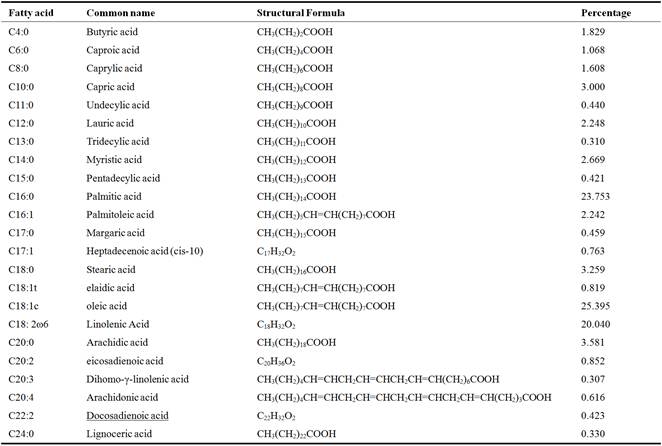 The antibacterial effect of fatty acids has been studied against 12 strains, which cause oral pathogens and they found that ω-3 PUSFAs and ω-6 PUSFAs showed an antibacterial effect against 11 of them [29]. Donkey milk fat contains 9.5% free fatty acids, while cow, sheep, goat and human milk fat have low levels of free fatty acids (0.7-1.5%) [30], [31]. Compared to ruminants, donkey milk fat contains a higher percentage of polyunsaturated fatty acids (PUFA) and a lower percentage of saturated fatty acids (SFA) and monounsaturated fatty acids (MUFA). In absolute values, donkey milk contains on average 1.69 g/l PUFA, 5.46 g/l SFA and 1.96 g/l MUFA compared to respectively 5.78, 15.2 and 16.9 g/l in human milk and 1.31, 25.8 and 9.2 g/l in bovine milk [25]. The fatty acids of horse and donkey milk are mainly unsaturated or short-chained, which is interesting from a nutritional point of view. Horse and donkey milks have additionally higher levels of linoleic acid (n 6 C18: 2) and a-linolenic acid (n-3 C18: 3) than bovine milk (respectively 5 and 224 times more) [32]. The antifungal activities exhibited by linolenic, linoleic and oleic acids may be useful in controlling important plant pathogens [33].

It was indicated that C12 (lauric acid) is the most inhibitory saturated fatty acid against gram-positive organisms [34].

Although lysozyme is designated as the main antimicrobial agent in donkey milk owing to its high concentration some fatty acids which have already been determined in donkey milk could be important for overall antibacterial [35]. Long-chain polyunsaturated fatty acids are attracting attention as potential new topical treatments for Gram-positive infections due to their antimicrobial potency and anti-inflammatory properties. It has been found that S. aureus cells were killed within 15–30 min during exposure to the Long-chain polyunsaturated fatty acids [36], [37]. In addition it was demonstrated that fatty acid and monoglycerides with 8-12 carbons were more strongly antiviral and antibacterial when added to milk and infant formula than long chain monoglycerides [38]. Moreover it has been found that linoleic, lauric and oleic acid among the detected fatty acids in donkey milk have antibacterial activity against Listeria monocytogenes and Staphylococcus aureus [39]. 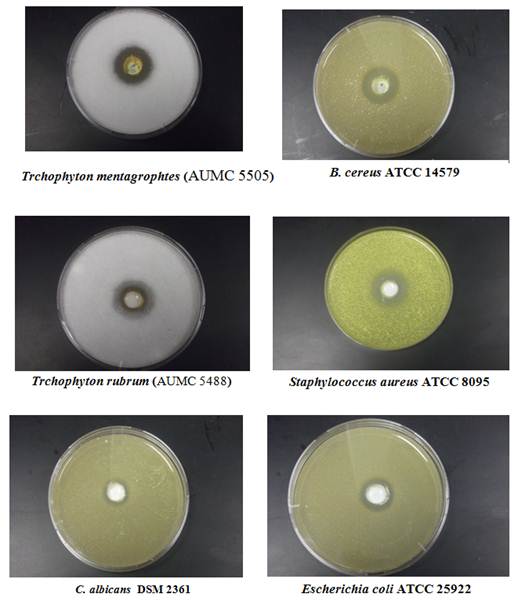 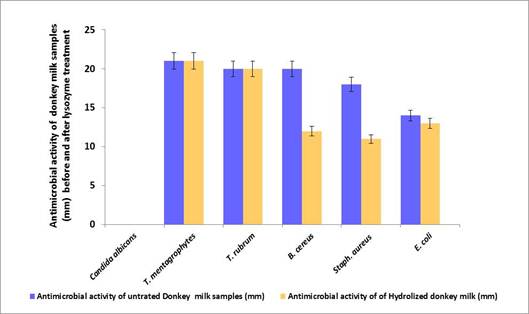 Figure 2. Antimicrobial activity of donkey milk samples (mm) before and after lysozyme treatment.

Finally, on the basis of results obtained in this study, the antimicrobial activity of donkey milk against Staphylococcus aureus and the dermatomycotic fungus Trichophyton rubrum which frequently cause acute or chronic inflammatory tinea corporis; may be considered as a valuable natural product with novel functional properties in cosmetics and pharmaceutical industries.

The authors would like to thank Dr. Rosanna Paolino and Dr. Hazem Elshafie, (University of Basilicata-Italy) for their help to analyze fatty acids composition of donkey milk by GC mass spectrometry.