Silver (Ag) is a naturally occurring ductile and malleable element. It has higher thermal and electrical conductivity among all metals [1]. In addition, metallic silver has been used in several medical application which includes surgical prosthesis and splints, and coinage [2]. The antibacterial properties of silver is known to world from ancient times [3]. Recently, silver compounds such as silver chloride, silver nitrate, and silver oxide also gained significant attention due to their antimicrobial properties [4]. Allahverdiyev et al. reported that the silver oxide has an antibacterial effect against drug-resistant bacteria and leishmania parasites [5] Also, the presence of silver oxide in glassy system showed its significant effect against Eschierchia coli and Salmonella and Pseudomonas bacteria [6]. It is also reported that the efficacy of drug is highly depends on their physical and thermal properties [7, 8]. Thus, it is important to study a treatment strategy i.e. biofield energy treatment, which may modify the physical and thermal properties of the silver oxide. The National center for Complementary and alternative medicine (NCCAM) has recommended uses of alternative CAM therapies (e.g. healing therapy) in the healthcare sector [9]. Besides, a human has the capability to harness the energy from the environment/Universe and transmit it to any object around the Globe. The object(s) receive the energy and respond into a useful way that is called biofield energy, and this process is known as biofield energy treatment. Mr. Trivedi’s unique biofield energy treatment (The Trivedi Effect®) had been studied in various scientific fields such as material science [10-12], microbiology [13] and agricultural [14]. The biofield energy treatment has significantly altered the physical and thermal properties in cadmium [15] and magnesium [16]. Recently, our group reported that biofield treatment has altered the bond length of Ti-O in barium titanate [17]. Therefore, based on excellent outcomes with biofield energy treatment on metals and ceramics, this work was undertaken to evaluate the effect of this treatment on the physical and thermal properties of the silver oxide powder using X-ray diffraction (XRD), differential scanning calorimetry (DSC), thermogravimetric analysis (TGA), and Fourier transform infrared (FT-IR) spectroscopy.

Silver oxide powder was procured from Sigma Aldrich, USA. The procured powder was divided into two parts coded as control and treated. The control part was remained the same and the treated part was in sealed pack, handed over to Mr. Trivedi for biofield energy treatment under standard laboratory condition. Mr. Trivedi provided the treatment through his energy transmission process to the treated sample without touching the sample. After that, the control and treated samples were characterized by using XRD, DSC, TGA, and FT-IR techniques.

The crystallite size (D) was calculated by using Scherrer equation as following:

Where, Dc and Dt are crystallite size of control and treated powder samples respectively.

The thermal analysis of silver oxide powder was performed using DSC and TGA-DTA. For DSC analysis, Pyris-6 Perkin Elmer DSC at a heating rate of 10ºC/min with nitrogen atmosphere, was used. The thermal decomposition temperature and thermal energy of the samples were obtained from the DSC curve. The percentage change in thermal energy (ΔH) was calculated using following equation:

Where, ΔHControl and ΔHTreated are the latent heat of fusion of control and treated samples, respectively. Besides, for TGA analysis, Mettler Toledo simultaneous TGA-DTA was used to analyze the thermal characteristics of silver oxide powder. The samples were heated from room temperature to 900ºC with a heating rate of 10ºC/min under nitrogen atmosphere.

FT-IR spectra were recorded on Shimadzu’s Fourier transform infrared spectrometer (Japan) with frequency range of 4000-500 cm-1. The analysis was accomplished to evaluate the effect of biofield treatment on dipole moment, force constant and bond strength in chemical structure. 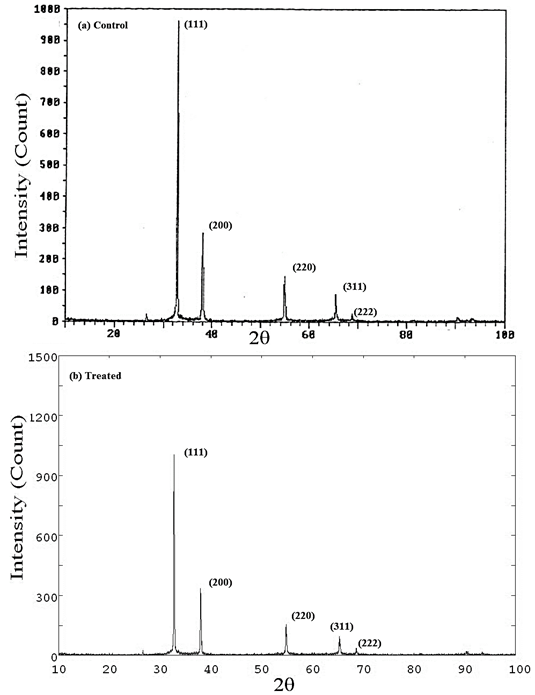 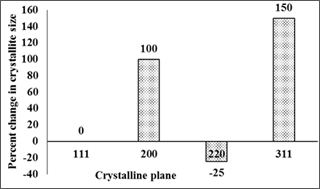 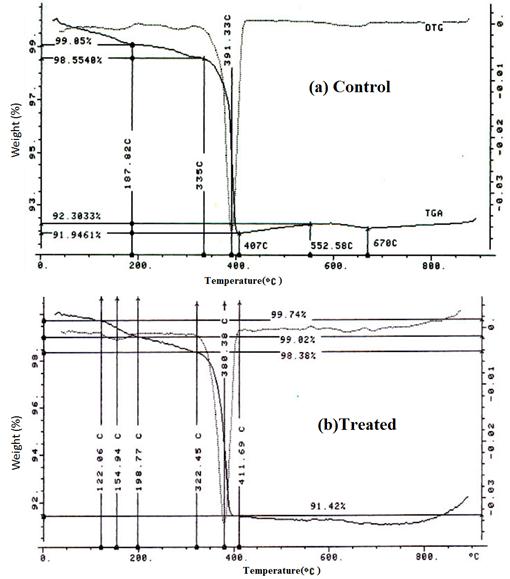 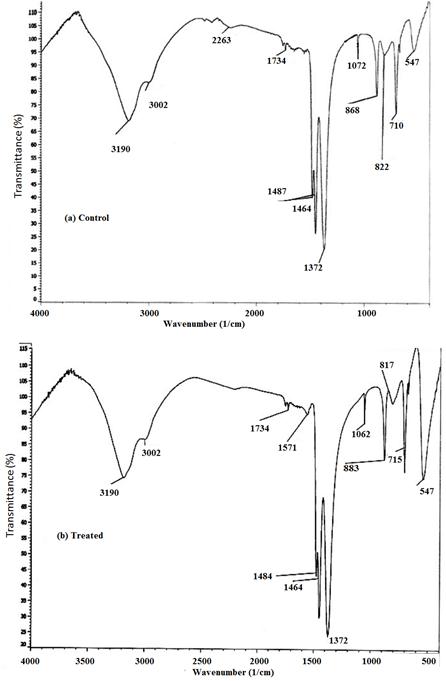 Authors thank Dr. Cheng Dong of NLSC, Institute of Physics, and Chinese academy of sciences for permitting us to use Powder-X software for analyzing XRD results. The authors would also like to thank Trivedi Science, Trivedi Master Wellness and Trivedi Testimonials for their support during the work.