The purpose of this review is to compare prostate cancer critical descriptive epidemiological measures of incidence and mortality in high income versus LMICs. The GLOBOCAN international data were complemented by data from SEER-13 and Canadian Cancer Society (CCS). A secondary goal is to identify different prostate cancer awareness gaps in high income and LMICs.

We identified credible sources of data from the International Agency for Research on Cancer from the World Health Organization, Canadian Cancer Society, American Cancer Society, and the Cochrane Review Group in Prostate Diseases and Urologic Malignancies specialized registry (through November 2015). This data was supplemented with CI5-Volume 10 (cancer incidence in 5 continents) data. We included studies with reliable epidemiological data.

The GLOBOCAN 2012 prostate cancer age-adjusted incidence rate estimates were extracted from the IARC website. The age-adjusted incidence rate and mortality rate estimates represent a weighted mean of age-specific rates, standardized to the World Standard Population. The detailed methodologies and data sources used by GLOBOCAN to estimate cancer statistics for those nations included in its 2012 database are described in detail on the GLOBOCAN website.10 The GLOBOCAN 2012 estimates are provided at the level of the nation. Estimates from GLOBOCAN, 2012 reflect the most recent available data per nation, varying from two to five years previous to the GLOBOCAN 2012 release.

For the purposes of this research, a country with per capita Gross National Income (GNI) of less than or equal to $12,615 US dollars was considered a LMIC. Even though LMICs and developing countries are used synonymously, this terminology does not imply that all countries have a preferential final stage of development. Any country with per capita GNI of greater than or equal to $12,616 US dollars is considered high income. High income country will be synonymously used with the term developed country.

In 2012, a total of 307,000 deaths was attributed to prostate cancer, making it the fifth leading cancer-related death among men.7 The highest mortality rates are in sub-Saharan Africa and Caribbean, where age-standardized rates are as high as 24 and 29 per 100,000 respectively.7 However, some individual countries in these regions have higher incidence and mortality rates than have been listed. Comparatively, mortality rates are intermediate in the Americas and Oceania and very low in Asia at 2.9 per 100,000, especially in South-Central parts. However, this risk increases if an Asian man moves to a Western country such as the United States or Canada.6-7,9 Researchers are conducting studies in the specific reasons and mechanisms behind why these varying levels of risk exist and change. The age standardized incidence and mortality rate per 100,000 in different parts of the world are outlined in Figure 1.7 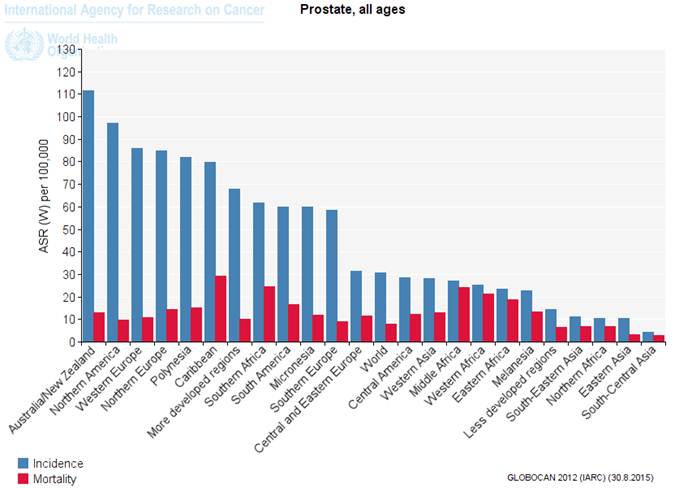 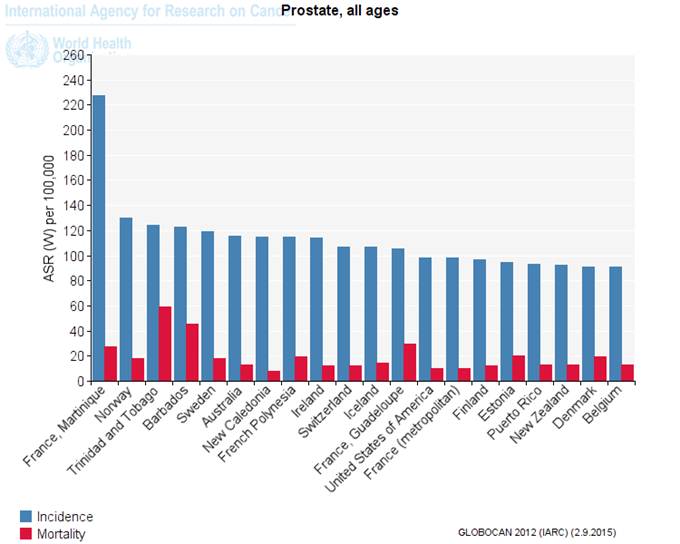 Prostate cancer epidemiology highlights in each country have been summarized in Table 1. In this table, developing and developed are categorized separately and ranked in descending order from high to low mortality rates. Among developed countries, prostate cancer mortality is highest in the

Due to the more widespread introduction of prostate specific antigen (PSA) screening, the median age of diagnosing has been trending down over the decades.14,15 Due to aggressive screening and more knowledge about the genetic and lifestyle related etiology (as seen in Figure 3), only up to 10% of patients actually die from this disease. However, researchers are still perplexed and investigating more about the epidemiology and biology of the disease. In the United States, the median age at diagnosis of prostate cancer dropped from 72 in 1986 to 66 in 2012.16 Currently the median age of death due to prostate cancer in the US is 80. Current US SEER (The Surveillance Epidemiology and End Results program) data shows that nearly 80% of prostate cancer cases are diagnosed when they are still localized and have a 5-year survival of nearly 100%.16 There was a three-time increase of prostate cancer incidence from 1977; and among UK men aged < 55 years, there was a nine-time increase in prostate cancer incidence.16,17

In Africa, there is much variability in the incidence and screening of prostate cancer, throughout the continent (as seen in Figure 3). Even though, Sierra Leone has relatively lower incidence rate, the mortality rate is higher than the incidence rate, demonstrating the need for adequate screening programs. Incidence variability in Africa also can be seen in the region of this continent. For example, according to the IARC, the most commonly diagnosed cancer among men in Southern Africa was prostate cancer.10,18,19 The incidence rate in Southern Africa (i. e. Botswana, Lesotho, Namibia, South African Republic, and Swaziland) is seven times higher than the lowest rate in Northern Africa (i. e. Algeria, Egypt, Libya, Morocco, Sudan, Tunisia, and Western Sahara) and two times higher than the second highest rate in Western Africa (Benin, Burkina Faso, Cape Verde, Cote d’Ivoire, Gambia, Ghana, Guinea-Bissau, Guinea, Liberia, Mali, Mauritania, Niger, Nigeria, Senegal, Sierra Leone, and Togo). Concurrently, parts of Southern Africa (Botswana (life expectancy of age 47) and Lesotho (life expectancy of age 49)) have life expectancies less than 50.18,19 Other theories are necessary to explain these epidemiological discrepancies of countries with lower life expectancy having higher incidence of prostate cancer.20,21 There may be a genetic susceptibility due to the observation by researchers that descendants in Jamaica do not undergo prostate-specific antigen testing, and yet have higher incidence rates of prostate cancer 40. Even in the United States, blacks have higher Gleason scores than white men, regardless of Caribbean or African descent.19 This demonstrates that genetics may play a major role in the epidemiology of prostate cancer. 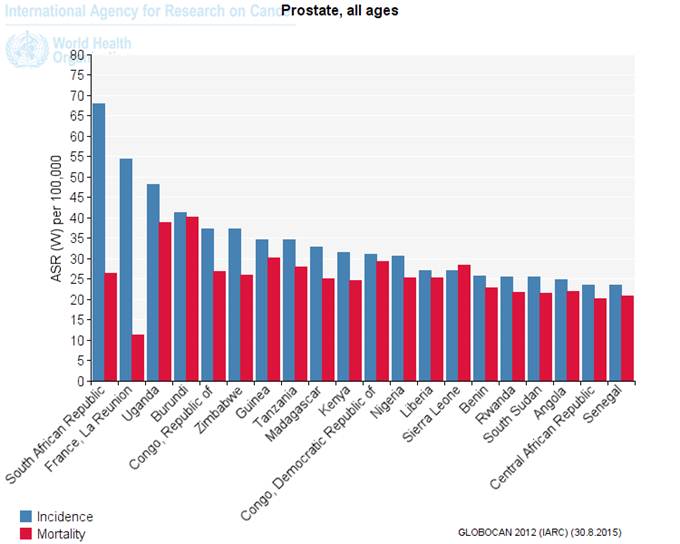 3.4. Gaps in Knowledge in Low and Middle Income Countries

As reflected from the IARC data, Uganda has the highest prostate-cancer related mortality rate in developing countries. According to CI5-Volume 10 (cancer incidence in 5 continents), 2003-2007 data, age-standardized incidence rate of prostate cancer from Kampala (capital city) Cancer Registry is 42.5 per 100,000, making it the most common male cancer.22 This was up from 37.6 per 100,000 in 1998-2002. While this registry is a reflection of the Kyadondo County in Uganda, the incidence rate reflects major gaps in knowledge. Nakandi et al. Found that even though education and awareness was being propagated through the mass media, only 12.5% of the 324 subjects had actually heard of prostate cancer from health care providers.23 Consequently, in focus group interviews, respondents did not know what the prostate gland was, did not know about PSA testing, and thought prostate cancer was something similar to gonorrhea. Only one-tenth of the sample had proper knowledge of prostate cancer.

In other LMIC areas in Sub-Saharan Africa, there is a lack of awareness reflected by the close rates of morbidity and mortality rates in Burkina Faso. Kabore et al. found that out of 600 respondents, 62% had no knowledge about the prostate gland or prostate cancer.24 Additionally, while 70% of the men were unaware of any diagnostic tests for prostate cancer, 12% of men cited too much sexual activity as a major risk factor of prostate cancer. Lack of adequate knowledge demonstrates needs to be addressed in order to improve diagnosis and adequate treatment of prostate cancer in developing countries.

Even though there is an overestimation of the benefits of PSA testing in high income countries, in other countries, there is differential knowledge in minority subpopulations about prostate cancer. Additionally, during the treatment process significant others play a significant role in the decision making process and thus must have proper knowledge. For instance, Owens et al. Found that in the United States, African Americans have misconceptions about prostate cancer being caused by homosexuality or the lack of sexual activity.26 Additionally, there was a lack of knowledge about the prostate gland and the proper screening age. However, this group was aware of the role of lifestyle, some symptoms, and the high frequency of prostate cancer.

This data shows lower incidence rates and higher mortality rates of prostate cancer in African and Caribbean countries relative to developed western countries. In other words, most people in LMICs are diagnosed with more advanced disease when it is more challenging to treat the cancer and requires radical interventions. Among suggested reasons for higher rates of mortality in LMICs, are the different levels of prostate cancer awareness along with the adoption of a sedentary lifestyle and urbanization. Also, individuals in high income countries are more aware of PSA testing than in LMICs. In sharp contrast to very low levels of prostate cancer awareness, individuals in high income countries are misinformed about the prostate gland and the benefit estimation of PSA testing, indicating a need for better understanding of PSA testing. More spouses and significant others also are more aware and participate in the decision making process about prostate cancer in high income countries. There was no such evidence of the importance of spousal knowledge found in LMICs.

In order to address the paucity of data, policy needs to be developed in order to expand surveillance systems to monitor prostate cancer adequately. Additionally, mass media campaigns need to educate the population about the harmful effects and the importance of screening tests for prostate cancer in LMICs and high income countries. Globally, spouses and significant others need to be made aware of prostate cancer as well, since they play a role in the decision making process.