Abstract: Background: Chronic Suppurative Otitis Media (CSOM) is a common cause of hearing loss and many complications such as meningitis. Many approaches to the treatment of CSOM have been unsatisfactory because CSOM microbiological isolates, as well as their sensitivity patterns, vary from place to place. This study sought to determine the pattern of microbiological isolates of CSOM and the demographic characteristics of patients with CSOM at the University Teaching Hospital, (UTH) and Beit Cure Hospital (BCH) in Lusaka, Zambia. Materials and Methods: The study was a hospital based Cross-sectional descriptive study conducted at the ENT outpatient clinics of UTH and BCH in Lusaka, Zambia.100 CSOM patients were included in the study. Quantitative data on the participants’ demographic details and clinical features were obtained using structured questionnaires. The middle ear discharge was aseptically collected using a sterile cotton swab. In the laboratory, samples were inoculated on agar media to isolate microorganisms and antibiotic susceptibility testing was done using Kirby-Bauer method as per CLSI guidelines. Results: From the findings, out of the 100 CSOM patients studied, 33(33%) were children below 18yrs and 67(67%) were adults. 59(59%) of the patients had unilateral CSOM while 41 had bilateral CSOM which gave a total of 141 ears that were analyzed.119(84.4%) had pure cultures, 20(14.2%) had mixed cultures and 2(1.4%) had no growth. Of the 169 microbiological isolates, the most frequent isolates were Proteus mirabilis 49(29.0%), Pseudomonas aeruginosa, 32(18.9%), coagulase negative Staphylococcus 18(10.7%) and klebsiella pneumoniae 17(10.1%). High sensitivity rates were revealed to Gentamycin (64-100%), meropenem (68-100%), ceftazidime (85-100%), ceftriaxone (64-80%), and ciprofloxacin (66-88%). High resistance rates were recorded to Amoxicillin-clavulanate (as high as 100%), ampicillin (as high as 100%), tetracycline (as high as 91.2%) and cotrimoxazole (as high as 100%) and penicillin (as high as 100%). Conclusion: The study concluded that Proteus mirabilis was the most dominant microbiological isolate followed by Pseudomonas aeruginosa. The isolated microorganisms had high susceptibility rates to gentamycin, meropenem, ceftazidime, ceftriaxone and ciprofloxacin. There were high resistance rates to amoxicillin-clavulanate, ampicillin, tetracycline, cotrimoxazole and penicillin.

Chronic suppurative otitis media (CSOM) is chronic inflammation of the middle ear cleft (Eustachian tube, middle ear, and mastoid cavity) which presents with recurrent ear discharge or otorrhoea through a tympanic perforation for two weeks or more.1CSOM commonly occurs during the first 6 years of a child’s life, with a peak around 2 years.2According to WHO, about 330million individuals, globally, have CSOM. In Africa, over 2.4 million people have CSOM, accounting for almost 4% of the global CSOM burden.1

The pathogenesis of CSOM is multifactorial with factors such as Eustachian tube (ET) dysfunction, genetic predisposition, and environmental factors playing a role.3 A dysfunctional and structurally immature ET is the most important factor in the pathogenesis of otitis media (OM).4 Infants and young children are especially at risk for reflux (containing bacteria and viruses) into the middle ear from nasopharynx via the ET because their ET is short, horizontal, and ‘floppy’.3The bacteria and viruses in the middle ear elicit an inflammatory response causing an acute infection. CSOM is initiated by an episode of acute infection of the middle ear that fails to resolve and result in a permanent TM perforation.4

Apart from being a cause of complications such as facial palsy, mastoiditis, brain abscess and labyrinthitis, CSOM is a major cause of acquired hearing impairment, especially in developing countries.1Educational, vocational and social problems are some of the problems that stem from hearing impairment. Other problems include impaired speech and language development, poor academic performance and poor social interaction.1

This study was a hospital based cross-sectional descriptive study conducted in the ENT outpatient clinics at the university Teaching Hospital (UTH) and Beit Cure Hospital (BCH) which are situated in Lusaka, Zambia. Ethical approval was obtained from the KNH-UON Ethics Research Committee in Nairobi, Kenya; ERES (Excellence in Research and Science) Converge Ethical and Research Committee in Zambia; and from the aforementioned Hospitals. The sample size of 103 CSOM patients inclusive of 10% attrition was determined by the Yamane formula (1967:886)10 with a precision error of 5%. The study group was as described under the section 2.1 below. The collection of materials for laboratory analysis and susceptibility tests have been described in section 2.2 and 2.3 respectively.Quality control was a continuous process throughout the study to maximize validity and reliability of the findings of the study. Measures that were put in place included the use of trained health professionals; aseptic techniques in collecting specimen;internal quality assessment of the procedures in the laboratory.

The respondents were patients of all age groups who had actively draining CSOM (using WHO CSOM definition)and were attending the outpatient ENT clinics at UTH or BCH. They were patients who were not on any antibacterial and anti-fungal medication (at least in the last 2 weeks before participating in the study) and did not have any known immunosuppressive diseases. These were patients who consented or for whom a legal guardian had consented to participate in the study.

Using an aseptic technique (outlined below) pus discharge from the participants discharging ears was collected by the principal investigator within the ENT clinic on the first day of contact before any topical or systemic antibiotics or anti-fungal medication was started. Using sterile gloves (after washing hands with soap) under direct visualization with good lighting, and under microscopy for the majority of the patients, a sterile swab was passed through a sterile aural speculum placed in the EAC (to avoid contamination from the skin of the auditory canal) and then advanced to the middle ear or the inner two-thirds of the EAC to collect pus specimen. The sample obtained was put in a swab transport tube that contained a transport media and then labeled with a unique patient identifier and sent to the UTH microbiology laboratory. In the laboratory, by the laboratory technician, the specimens collected were inoculated on sheep Blood Agar, MacConkey's media, and chocolate agar media to culture aerobic bacteria. Anaerobic blood agar incubated in an anaerobic jar was used to culture anaerobic bacteria. Fungi were cultured on Sabouraud´s dextrose agar. The culture plates were incubated at 37°C for 24-48 hours. Owing to the fact that anaerobes grow slowly compared to aerobes, anaerobic culture plates were incubated for up to 7 days to allow for anaerobic bacterial growth. Isolates from the culture plates were identified Using gram staining, colony morphology, catalase, coagulase, oxidase and biochemical strips. Lactophenol cotton blue was used for final identification of fungal growth.

A total of 100 CSOM patients were studied. The age range of the study patients was 6 months to 68 years. Of the patients studied, 33(33%) were children under the age of 18, while 67(67%) were adults. The mean age was 24.5(±18.0) years. The majority of the patients with CSOM in this study,81(81%), resided in peri-urban areas which are associated with a low socioeconomic status. Other demographic characteristics of the respondents are as shown in Table 1.

Antibiotic susceptibility test was carried out for all the significant isolates which were Proteus mirabilis, Pseudomonas species, Klebsiella pneumoniae, and Coagulase Staphylococcus species. Proteus mirabilis showed high sensitivity rates with gentamycin (91.3%), meropenem (89.1%), ceftazidime (87.0%), ceftriaxone (80.4%), cefotaxime (76.1%),cefoxitin (65.2%) and ciprofloxacin (67.4%) as shown in Figure 1a below. Proteus mirabilis showed resistance rates of 77.8% to amoxicillin-clavulanate, 68.9% to ampicillin, 91.2% to tetracycline and 78.9% to cotrimoxazole (Figure 1a). 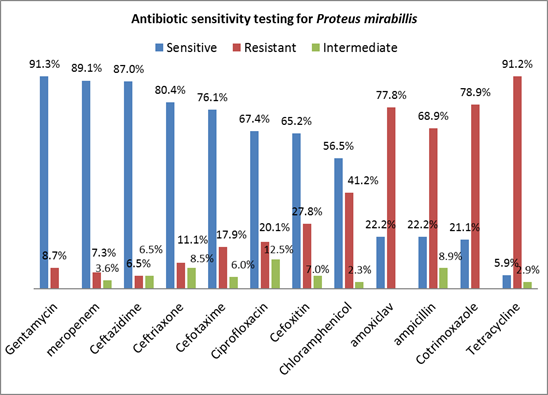 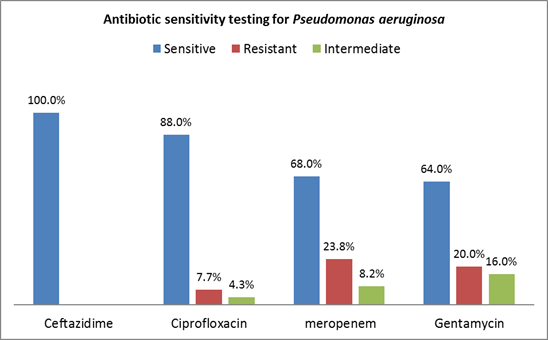 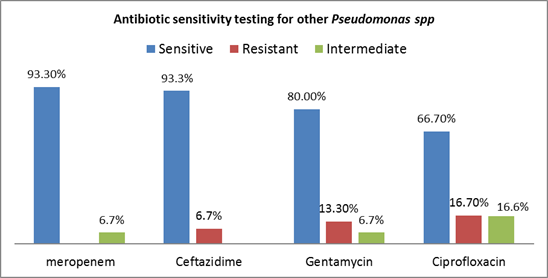 In this study of a 100 CSOM patients, the majority of the patients were adults that accounted for 67%. Owing to the reason that 33% of the respondents were children and that 38 adult patients (56.7% of the adults) reported onset of CSOM in childhood, it was inferred that CSOM is common in children. This is attributed to the short, wider and relatively horizontal Eustachian tube in this population.3

Children aged 0-5years accounted for 19% of the respondents (Table 1). This is similar to a study by Orji FT and Dike in 2015 where children below the age of 5 accounted for 23.8% of the patients.11It was found that CSOM was slightly more common among male patients (57%) similar to findings in a study done by Chirwa in 2014 in Malawi, where 64(61.5%) were males.12Other studies, however, found that CSOM was common among females than among males.13

Aspergillus niger, in only 3(1.8%) specimens, was the only fungal microorganism that was isolated in this study. The finding of Aspergillus niger as an etiological agent for CSOM is supported by other studies.12,21,22In other studies, Candida species were also isolated.12,21

The sensitivity rates of Proteus mirabilis, gram-negative bacilli, for ciprofloxacin (a commonly used topical antibiotic), were relatively lower (67.4%) than those found in the study by Bayeh et al in 2011where rates were as high as 93%.23 However, decreased sensitivity among gram-negative bacilli to Ciprofloxacin was also noted by Jeyakumari D. et al in 2015.24Because Ciprofloxacin is the most commonly used otic antibiotic for CSOM, its lower sensitivity rates found in this study need to be further investigated.

As all the gram-negative bacilli, including proteus mirabilis, that were isolated in this study showed high susceptibility rates (>than 80%) to Ceftazidime and meropenem, these drugs can be formulated as an empirical therapy for all gram-negative bacilli in cases of complicated CSOM where an intravenous drug would be required.

University of Nairobi, in Kenya

None of the authors have any conflicts of interest associated with the work presented in this manuscript.