Effects of Pregnanton Some Biochemical Parameters in Healthy Subjects

The pregnant woman's body goes through some profound anatomical, physiological, and biochemical changes to adapt to and support the entire pregnancy, which ultimately support the growing fetus. Although these physiological changes are normal [1]. Physiologic changes in pregnancy induce alterations in the alimentary, cardiovascular, pulmonary, endocrinology changes and renal organ systems during pregnancy are designed to increase availability of nutrients and remove wastes from the fetus. These physiological adaptations will impact on toxicokinetics. Absorption, distribution, metabolism,elimination, transfer between maternal and fetal compartments. Pregnant women undergo several adaptations in many organ systems. Some adaptations are secondary to hormonal changes in pregnancy. Some of the changes in maternal physiology during pregnancy include, for example, increased maternal fat and total body water, decreased plasma protein concentrations, especially albumin, increased maternal blood volume, cardiac output, and blood flow to the kidneys, and decreased blood pressure. Other physiologic changes include increased respiratory alkalosis, delayed gastric emptying and gastrointestinal motility, and altered activity of hepatic drug metabolizing enzymes [2-5].

Persson and Hansson (1993) They suggested that there is a very close relationship between maternal and fetal glucose concentrations during early gestation. Maternal hypoglycaemia during pregnancy will therefore not only affect the mother herself, but also the fetal growth. Chiasson et al. (1997) They found that decrease in the plasma glucose level during pregnancy suggests that the use of glucose by the growing fetus is augmented and that this is not totally compensated for by a rise in hepatic glucose production. The glucose requirement by the growing fetus is probably supplied by the increased postprandial plasma glucose level.

Pregnancy alters the pattern of maternal cortisol metabolism. (Pepe et al. 1976) Tsubouchi et al. (2011) They reported that salivary cortisol concentrations of the chronic high stress group were significantly lower compared with those of the normal group. Goedhart et al. (2011) demonstrated thathigher maternal cortisol levels were independently related to lower birthweights and a higher gestational age risk. Maternal psychosocial problems were not associated with cortisol levels. Shea et al. (2007) They resulted that cortisol response was not significantly different between women who were depressed during pregnancy compared to healthy control women. The cortisol response may provide important information about the maternal hypothalamic-pituitary-adrenal axis during pregnancy.

There are many studies about the effects of pregnant on phosphate, Dawson and Wray (1985) They conclude that concentrations of phosphorus metabolites depend upon the physiological state of the uterus.

Mbassa and Poulsen [8] found that phosphorus decreased in late gestation. Alterations in the level of plasma electrolytes due to pregnancy and depends on age, influenced also by environment. Wójcicka-Jagodzińska et al [9] conclude that premature uterine contractility in women in the second trimester may be related to the disturbances of calcium-phosphorus-magnesium homeostasis. Yokus and Cakir [10] found that phosphorus varies influenced by seasonal, but not physiological changes, whereas ALP concentrations change in physiological and seasonal conditionsin early pregnancy. See comment in PubMed Commons below Michałeket al [11] demonstrated that the kidneys of pregnant goats regulate the calcium-phosphate balance to a great extent. The aim of this study was to assess the effects of pregnancy in the first trimester on several biochemical parameters in healthy pregnant women by comparing the values of these parameters with non-pregnant women.

The data were presented as the mean ± S. E. Statistical differences between the values during and post fasting were determined by Student's t. test. 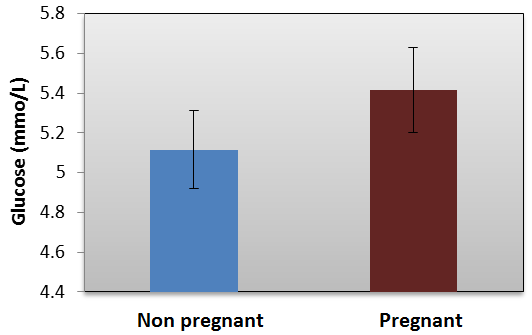 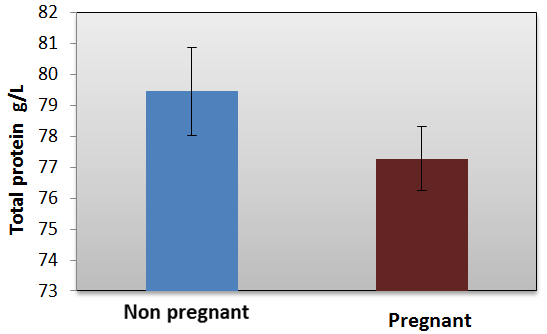 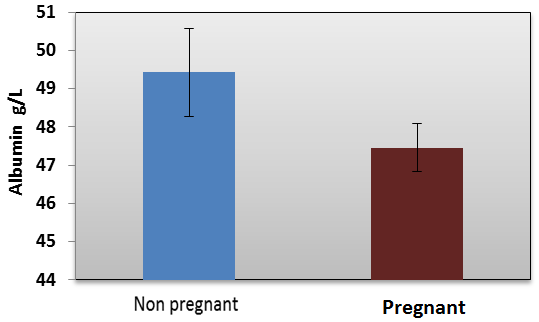 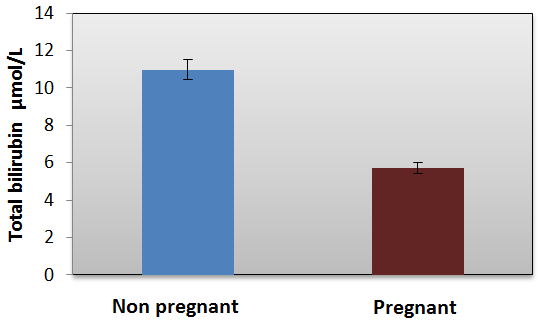 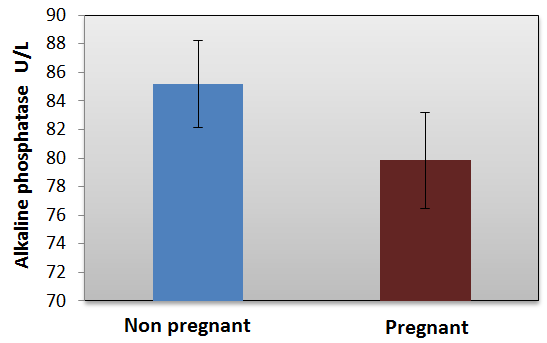 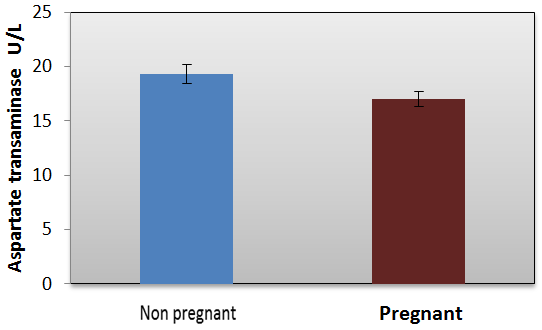 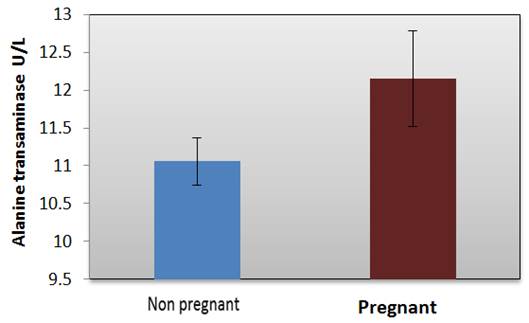 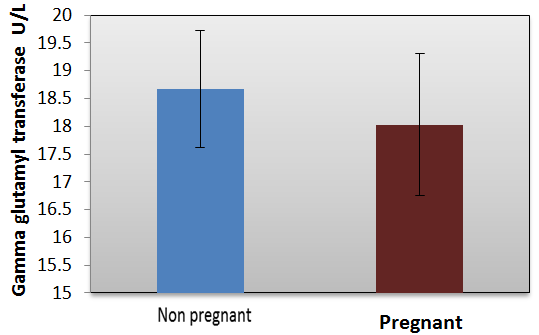 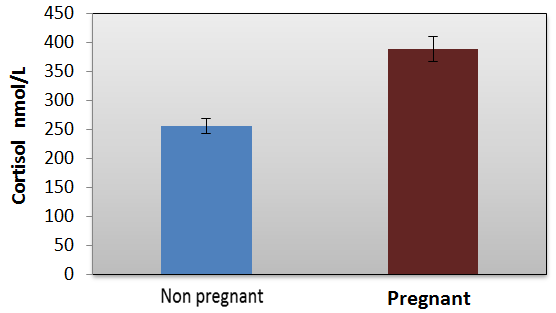 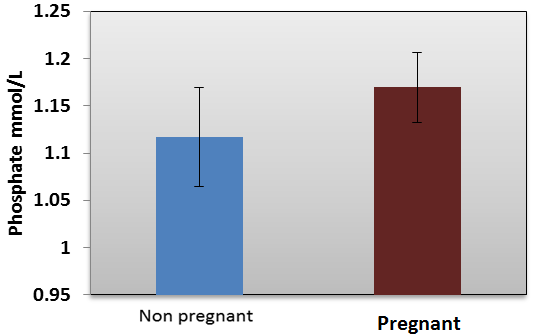 Also the current study found slightly decreased in total protein and albumin, The slightly decreased in albumin may be due to hemodilution. thisagreement with Carter [19]; Van Buul et al. [20] and Bacq et al [14]. They resulted that serum albumin levels were lower during all trimesters of pregnant because hemodilution. While Bar et al. [21]; Nallaet al. (2014) demonstrated significantly higher albumin excretion rate values in all pregnant compared to non-pregnant women, and the results were in correlation with higher urinary creatinine clearance values [21]. This study not agreement with our result.

The Reference values are usually defined based on blood samples from healthy men or non-pregnant women. This is not optimal as many biological marker changes during pregnancy and adequate reference values are of importance for correct clinical decisions. There are only few studies on the variations of laboratory tests during normal pregnancies, especially during the first two trimesters. It is thus a need to establish such reference values. It is important to consider normal reference ranges, specific to pregnancy when interpreting some laboratory results that may be altered by the normal changes of pregnancy.