Abstract: The fundamentals of structure-based drug designing rely on protein-ligand interactions, which play a significant role to open a gateway from identification of active residues and development of potential drugs. The endeavor behind this work is to select most susceptible genes p53 and AKT1 which plays a vital role in lung cancer pathogencity. In a queue to deliberate the crucial role of these genes in-silico experimental strategy was adopted. 3-D structure of p53 generated by YASARA showed 50.9% sequence identity with 2PCX-A and Z-score of -0.276 while AKT1 showed 66.3% sequence identity with 3QKL-A and Z-score of 0.036. Mutational analysis revealed that R273L and C275Y mutations of p53 destabilize the DNA binding domain, while E17K mutation of AKT1directly affect the binding of the ligand as this residues lines the pocket. Molecular docking was performed using ligands Staurosporine and Nutlin-3 retrieved form ZINC database. Blind docking experiment revealed that p53 involve non polar (Leu206, Leu188, Pro190), acidic (Glu204, Tyr 205) and basic (Arg202) as most interacting residues. AKT1 interactions with ligand Staurosporine revealed nonpolar (Val164, Phe438, Phe442, Phe 236, Phe 237, Phe 161), polar (Gly159, Gly157, Gly234, Gly 278), basic (Lys163, Lys158, Lys 276, Lys 179), acidic (Asp439, Glu278) as most interacting residues. It is assumed that current study will play a significant contribution to design potential drug inhibitors by utilizing most interactive residue information with Nutlin-3 and Staurosporine ligands to restrain the interaction between p53 pathways and epidermal growth pathways. Structural based receptor-ligand interactions likely to be used against anti-cancer therapy.

Lung cancer is one of the most common type of cancer worldwide [1]. The mortality rate in lung cancer is 1.3 million per annum causing it to be the most prevalent cancer type with a very poor diagnosis and the foremost cause of mortality due to cancer in both well developed and developing countries. By the end of 20th century, lung cancer had become one of the major causes of preventable death. Strong evidences showed that 85-90% is caused due to tobacco smoking resulting in bronchogenic carcinoma [2,3]. According to epidemiologic studies, cigarette smoking is the major factor contributing towards development of lung cancer and it is reported that almost 85% cases of Non-Small cell lung cancer (NSLC) and 98% cases of Small cell lung cancer (SCLC) develop in smokers. Classification of lung cancer is shown in Figure 1. However, about 50% of lung cancers are apparent in ex-smokers and 25% of cases in the world occur in patients who never smoke. Extent of smoking and the quantity of cigarettes smoked in a day increases the lung cancer development chances among the smokers. In developing countries, lung cancer will remain a major health problem for the near future as cigarette smoking becomes more prevalent.

Lung cancer is initiated by activation of oncogenes or tumor suppressor genes inactivation. Previously reported research studies indicated various causes of lung cancer. Mutations in genes like K-ras proto-oncogene cause 10–30% adenocarcinomas in lung. Epidermal growth factor receptor (EGFR) modulates proliferation of cell, angiogenesis, tumor invasion and apoptosis. Oncogenic mutations and EGFR amplifications occur frequently in non-small cell lung cancer so EGFR inhibitors can be used for treatment of this common disease. Some other oncogenes involved in non-small cell lung cancer are NKX2-1, PIK3CA, c-MET and BRAF. Tumor suppressor gene inactivation has a crucial role in carcinogenesis of lung. Moreover, p53 which is most common tumor suppressor gene is mutated in about 60–75% lung cancer patients including both NSCLC and SCLC while RB is mutated in SCLC [4]. Moreover, DNA repair capacities are one of the major factors that can affect lung cancer susceptibility. Research studies indicate that DNA repair gene polymorphisms also enhance the lung cancer risk, of which nucleotide excision repair genes (ERCC1-2 and XPA), mismatch repair genes (MLH1 and MSH2), base excision repair genes (XRCC1 and OGG1) and double-strand DNA break repair genes (XRCC3) are the most common one in causing lung cancer [5]. 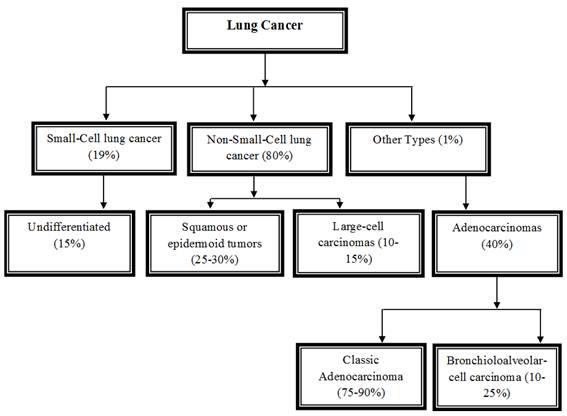 Over expression of EGFR genes are reported in cancers of the brain, breast, endometrium, head and neck, oesophagus, stomach, colon, ovary, bladder and lung [6]. Mutations in EGFR pathway genes have been found in ~10–30% cases of NSCLC but these mutations occur very rarely in other tumors [7]. Rare somatic mutations are also reported in other genes of EGFR pathway genes, like BRAF, HER2, PIK3CA and HER4.

The p53 pathway includes several different genes which belong to various upstream and downstream sub-pathways. p53 serve as gatekeeper of the cell which protect the cell from genetic instability and acts to sense multiple stress signals, some of which include DNA damage, activation of oncogene and hypoxia.

In current research study, Epidermal growth factor receptor (EGFR) signaling pathway and p53 pathways are selected for application of bioinformatics techniques like digital candidate gene approach (DigiCGA), expression analysis, Comparative modeling and molecular docking will be used to avoid time, expenditure, labor cost and quick analysis for prioritized candidate genes as well as to get deep understanding of the genes involved in these pathways of lung cancer. 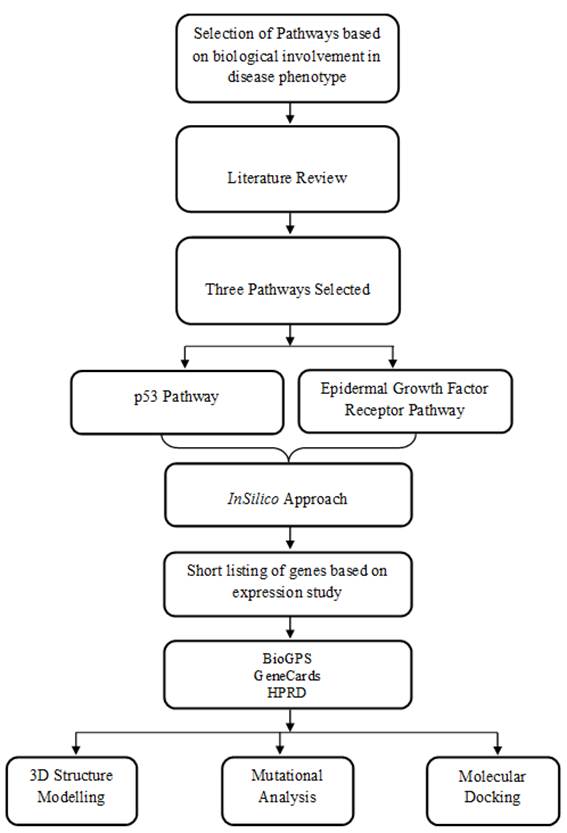 Figure 2. Protocol for the computational analysis of lung cancer.

In order to shortlist most plausible candidate genes out of total thirty two genes present in selected lung cancer signaling pathways, expression profiling was performed by using expression based databases like Human Protein Reference Database (HPRD), BioGene Portal System (BioGPS) and GeneCards. HPRD (http://www.hprd.org/) consists of all curated proteomic information of human proteins like protein–protein interactions, post-translational modifications (PTMs) and tissue expression based on experimental proven data [8]. BioGPS (http://biogps.org/) works on the principle of gene annotation which relies on three major characteristics of gene of interest i.e. (i) molecular function, (ii) biological process, and (iii) cellular location [9] while GeneCards (http://www.genecards.org/) is a human gene database, which is responsible to give information about all known and predicted human genes. For the better understanding of disease pathogencity, it retrieves biological information based on transcriptomic, genetic, proteomic and functional aspects.

The amino acid sequences of p53 and AKT1 were retrieved from NCBI database using accession number P04637 and P31749 respectively. These sequences of both genes were subjected to position specific iterated (PSI) BLAST [10] search against protein databank (PDB) [11] for identification of best possible template structures.

Homology/comparative modeling approach was implemented for whole protein sequences by using YASARA software, which is a tool for computational analysis with 3-D structure prediction, molecular docking, molecular visualization and molecular dynamics to predict the 3-dimensional structures as their structures were not resolved and reported yet in RCSB Protein Data Bank.

Predicted 3D structures were evaluated by PROCHECK and by ERRAT[12] servers.

Molecular docking studies were performed on set of selected genes, in which blind docking technique was adopted, in order to predict the structure of the intermolecular complex formed between prioritized proteins and their respective ligands through YASARA software. Ligands for p53 and AKT1 were retrieved, from ZINC database [13], which have evidences of interaction with respective proteins. Nutlin-3 was found as a ligand for p53, it inhibits the interaction between p53 and MDM2 and ligand for AKT1 was Staurosporine which is ATP-competitive kinase inhibitor. Chem Draw Ultra Version 8.0 was used to draw required ligand retrieved for receptor-ligand docking [14]. Both these proteins were subjected to 50 docking runs and almost 25 complexes were generated Complexes with the lowest docked binding energy were selected for further post-docking analysis. Post-docking Analysis was performed with LIGPLOT and CHIMERA [15] software and interactions between receptor and ligand were analyzed.

In order to short list the genes involved in selected pathways, expression profiling was done. p53 showed medium expression where as high expression was retrieved for AKT1 using BioGPS, HPRD and Genecards databases as depicted in Table 2. 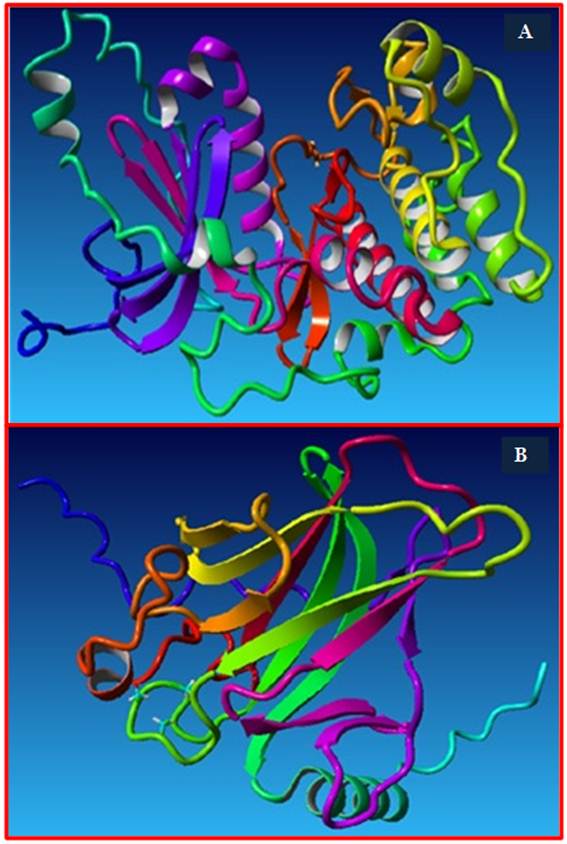 YASARA software generated a hybrid structure using 2-5 templates which are ranked on the basis of alignment score (PSI_BLAST) and structural quality (Z_Score) according to WHAT CHECK [19] obtained from the PDBFinder2 database for candidate genes.

Table 3. Templates for AKT1 sorted by their overall quality Z-scores and E-values.

Table 4. Templates for TP53 sorted by their overall quality Z-scores and E-values.

The predicted models were subjected to PROCHECK and ERRAT to find the reliability of models. Table 5 shows the Ramachandran plot characteristics and overall quality factor obtained for p53 and AKT1 predicted models which supported the quality of the modeled structures.

In order to obtain an optimal docking conformation we undertook 50 runs of docking for p53 and AKT1 proteins each Nutlin-3 and Staurosporine respectively. Complexes having lowest binding energies are selected for post docking analysis. Structures of ligands for AKT1 and p53 are shown in Figure 4 and 5. Both ligands were found to bind with their respective receptor proteins as shown in docked complexes in Figure 6 part A and B. Table 6 displayed the binding energies of docked complexes of our proteins.

Figure 5. a) p53 Ligand Nutlin-3 (4-[4, 5-Bis (4-chlorophenyl)-2-(4-methoxy-2-propan-2-yloxyphenyl)-4, 5-dihydroimidazole-1-carbonyl] piperazin-2-one) drawn through ChemDraw (b) Structure of Nutlin-3 drawn through Chimera. Nutlin-3 inhibit the interaction of mdm2 and p53 and induce a growth inhibitory state in cancer cells. 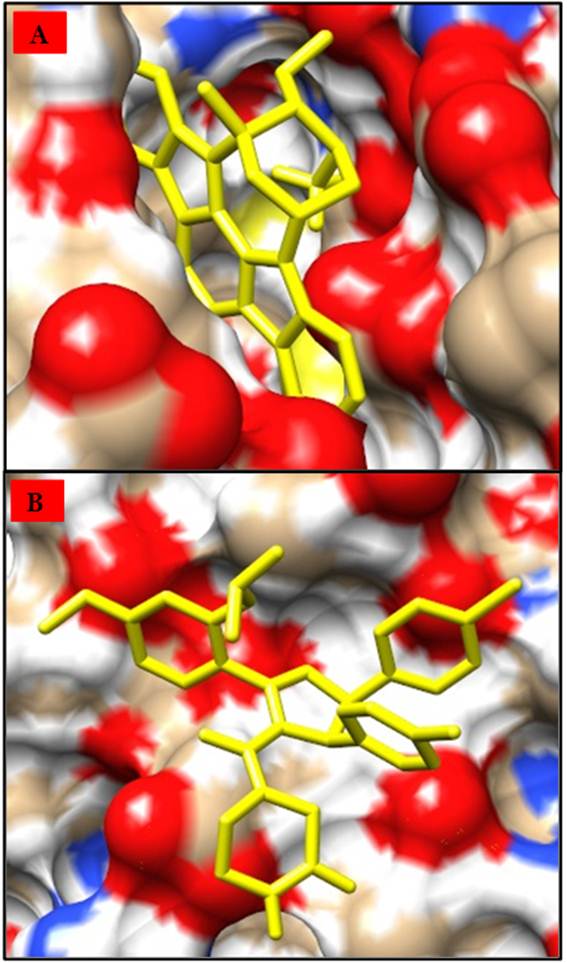 Figure 6. A Frontal View of the Docking Complexes A) Receptor AKT1 with ligand Staurosporine B) Receptor p53 with Ligandnutlin-3. Ligand is shown in "Stick" format and yellow color whereas the receptor is shown in "Surface" format. 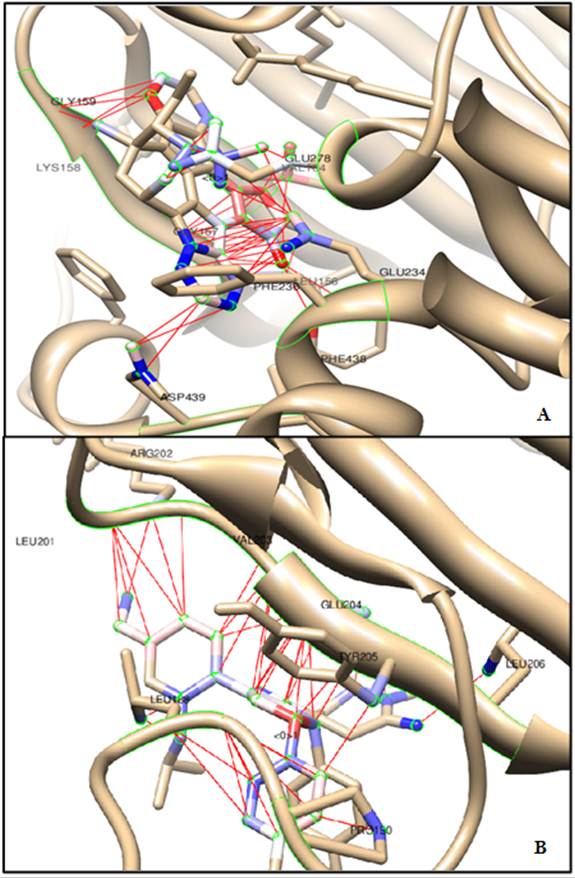 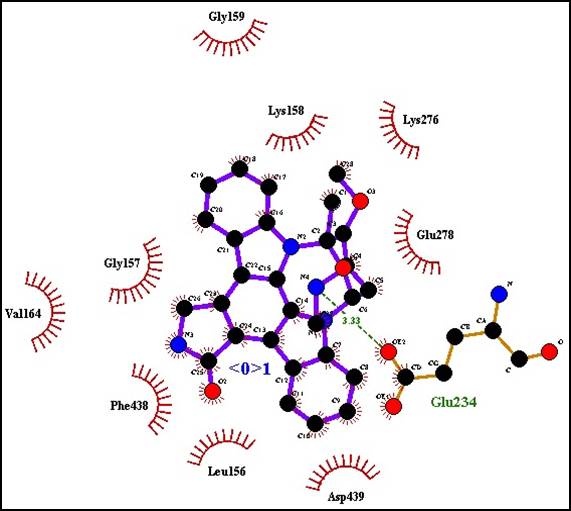 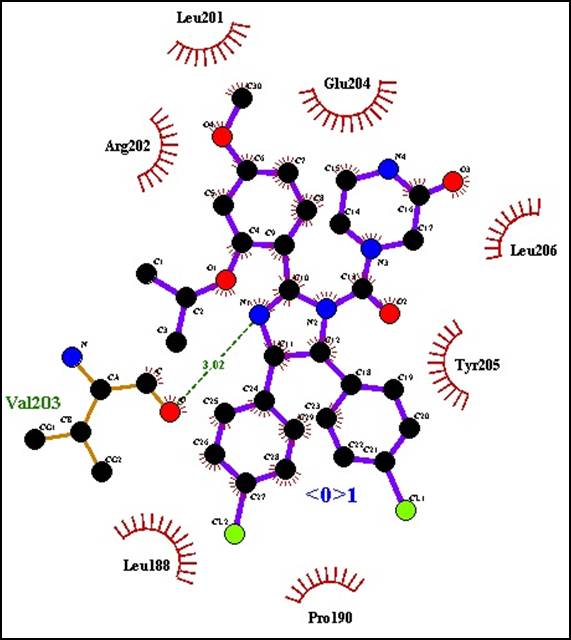 In present study, two key signaling pathways were selected and prioritized candidate genes from these signaling pathways were p53 and AKT1. p53 showed medium expression and AKT1 showed high expression in lungs. Comparative modeling with model assessment showed that generated 3D structure for most plausible candidate genes are reliable and scientists may go for wet lab experimentation by using mentioned templates. The binding features of prioritized genes with their ligands were also studied using docking approach. To inhibit the interaction between p53 and MDMD2 genes, which are closely functional partners of p53 pathway, Nutlin-3 ligand was retrieved which is commonly used against many cancer therapies by inducing a growth-inhibiting state called senescence in cancer cells, therefore thought to work best on tumors that contain normal or wild type p53. The second ligand used against AKT1 is Staurosporine, which avert the binding of ATP with kinase, alternatively inhibit protein kinases. By utilizing the core functions of ligands against mutated p53 and AKT1 proteins in docking study revealed the functionally important residues among p53 and Nutlin- 3, and AKT1 with staurosporine, which may play a significant role in disrupting the network of p53 and epidermal growth pathways, leading to make a potential drug against lung cancer.

We are thankful to Department of Bioinformatics and Biotechnology, International Islamic University, Islamabad for providing us a working platform.