Abstract: Objectives: This study was carried out to evaluate the efficacy of alendronic acid / colcalciferol plus Calcium in management of edentulous patients with a severe bilateral resorption of the mandible. Materials and methods: Twenty edentulous patients with severely resorbed mandibles have been managed by alendronic acid / colcalciferol plus Calcium tablets. They were followed-up clinically and radiologically for one year. Results: The results were promising for nineteen patients (95%) where the radiographic density and height of the bone have been improved. However, the treatment was unsuccessful for one patient who was elder, 89 years old, than the others. Conclusions: On the basis of our findings, we encourage the use of alendronic acid / colcalciferol plus calcium in management of mandibular osteolysis particularly in young age.

Massive osteolysis is a rare disorder characterized by spontaneous progressive resorption of one or more skeletal bones. Jackson was the first person who reported a case of vanishing humerus in 1838. Jaw involvement was first reported in young female by Romer in 1924. In 1955, the conditioned was defined by Gorham and Stout as a specific pathological process. In literature, the condition has several names including Gorham and Stout syndrome, massive osteolysis, phantom or vanishing bone disease. To date, approximately 200 cases have been reported with 41 cases involving the maxillofacial region, specially the mandible (1-4).

The etiology of this disease is unknown. However, trauma, local condition such as variation in pH, inflammations etc., are suspected. It may affect young and old individuals without sex or racial predilection. There is no genetic basis for transmission of the disease and no associated endocrine, metabolic or neurologic disturbance has been reported in literature. The disease can be monostotic or polyostotic, although multicentric involvement is exceptional. Any bone can be affected, although there is a predilection for pelvis, humerus, axial skeleton and mandible(5-8).

The aim of this study was to evaluate the efficacy of alendronic acid / colcalciferol plus Calcium in management of edentulous patients having a progressive bilateral resorption of the mandible.

Twenty edentulous patients (8 females & 12 males) referred from Department of removable Prosthodontics to Department of Oral and Maxillofacial surgery, Faculty of Oral & Dental Medicine, Cairo University because of severe resorption of the manbible were participated in this study. Their ages ranged from 59 to 89 years with an average age of 65 years. They were asymptomatic with no history of trauma. The medical history was insignificant and they were in a good general health. They did not know if there is other family member has the same disease or not. On intraoral examination, a bilateral severe resorption of the mandible was observed. The oral mucosa overlying the mandible was loose and normal in color. On palpation, no tenderness or lymphadenopathy was observed. The patients underwent routine hematological and biochemical tests (complete blood count, blood glucose level, renal and liver function tests) but all were within normal limits. Panoramic radiographs of all patients revealed a massive resorption of the mandibular basal bone. Except the symphysis area, the bone height ranged between 1 to 1.5 mm. The two rami of the mandible were intact in all cases (Fig. 1). The clinical and radiographic features were compatible with osteolysis of the mandible. 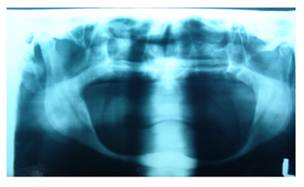 Figure 1. A panoramic radiograph showing a severe osteolysis of the mandible before the treatment.

All patients were managed by alendronic acid/colcalciferol tablets (Fosavance, Global Napi Pharmaceuticals, Egypt) every week for one year. Each tablet contained 70 mg of alendronic acid and 2800 IU colcalciferol. Also, they were advised to take 600 mg calcium supplement (Calcimax 600, Al Debeiky Pharma, Egypt) daily throughout the treatment period. Before giving the drugs, every patient was informed in detail about his disease and the possible complications of the disease and the drugs used for the treatment. The patients have signed informed consent forms before being included in this study. Also, they have signed additional permissions to allow their radiographs and data to be published in both printed and electronic versions of scientific Journals. This study was approved by the research ethics committee at Faculty of Oral and Dental Medicine, Cairo University. A regular follow-up was carried out through the treatment period.

In general, the patients tolerated the drugs well during the treatment period. All patients attended the follow-up visits regularly. None of the patients showed clinical or hematological side effects for the used drugs. Panoramic radiographs of nineteen patients (95%) showed a progressive improvement in radiographic density and height of the bone throughout the treatment period (Fig. 2A & B). However, one patient, 89 years old, showed a progressive resorption and tapering of the mandible till bilateral body fractures have occurred at six months after receiving the treatment (Fig. 3). 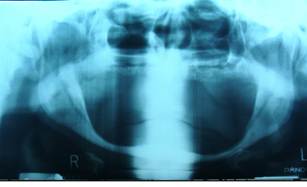 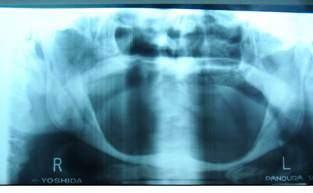 Figure 2. Panoramic radiographs demonstrating a progressive improvement in radiographic density and height of the bone at 6m (A) and one year (B) after receiving the treatment. 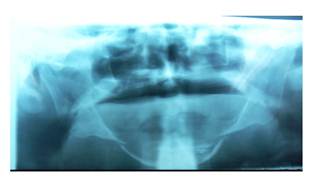 Figure 3. A panoramic radiograph showing progressive resorption & tapering of the mandible with bilateral body fractures at 6m after receiving the treatment.

Osteolysis of the mandible is a very rare condition of uncertain etiology. Bone mass and strength are obtained and maintained through a remarkable process of bone destruction and replacement that occurs at the cellular level throughout a person's life. Osteoclasts secrete enzymes that dissolve old bone, allowing osteoblasts to form new bone. Except in growing bone, the rate of breakdown equals the rate of building, thereby maintaining bone mass. Several authors have speculated that, bone osteolysis is due to an increased number of stimulated osteoclasts (9-11). However, Takeda et al have reported that, osteoclasts might not play a primary etiological role in osteolysis of the mandible (12). As mentioned by Möller et al, diagnosis of mandibular osteolysis must depend on combined clinical, radiological, and histopathological findings (9). In the current study, the diagnosis of mandibular osteolysis based mainly on clinical and radiological evidences of a progressive resorption of the mandible as well as negative hereditary, metabolic, neoplastic, immunologic, or infectious etiology. There was no histopathological evidence for the diagnosis as the patients refused to perform biopsy.

Up till now, the management of mandibular osteoysis is based on clinical experiences. Several surgical techniques, radiotherapy and medical therapies have been performed with variable and often discouraging outcomes(5, 13-18). Currently there is no recognized effective treatment. Huang et al and Gondivkar et al have reported cases of mandibular osteoysis where bone destruction ceased spontaneously without treatment (19, 20).

Bisphosphonates (also called diphosphonates) are a class of drugs that prevent the loss of bone mass. They are the most commonly prescribed drugs used to treat osteoporosis, Paget's disease of the bone, bone metastasis and multiple myeloma. In the current study, we tried to use a bisphosphonate drug, alendronic acid, combined with colcalciferol and calcium to manage osteolysis of the mandible. The results were promising in nineteen patients, mean age 62 years, where the radiographic density and height of the bone have been improved. However, the treatment was unsuccessful in one patient who was elder, 89 years old, than the others. This may indicate presence of a correlation between the treatment outcome and age of the patient. We believe that, the young patients had better response to the treatment with bisphosphonates than the older one because they have better vascularity and healing power. This is supported by Avelar et al and Mignogna et al who successfully managed mandibular osteolysis with bisphosphonate drugs in young patients (21, 22).

On the basis of our findings, we encourage the use of alendronic acid / colcalciferol plus calcium in management of mandibular osteolysis particularly in young age. However, further studies are required to confirm our results.