Patients of temporomandibular joint ankylosis are usually physically, psychologically and socially handicapped as a result of impairment of speech and mastication, poor oral hygiene and rampant caries. TMJ ankylosis usually hinders the growth of lower jaw and lead to facial deformities. Review of literature concerning the TMJ ankylosis showed that this subject has received a considerable attention regarding etiology, epidemiology, diagnosis and treatment however its effect on maxillary sinus has not received the same attention. The present study is an exploration for the possible skeletal change that may involve the maxillary sinus in such group of patients of TMJ bony ankylosis. (1-7)

Surgical correction of the residual facial deformities of TMJ bony ankylosis is an important part and exceeds the significant release of the ankylosis itself. The present investigation can provide prediction for the possible changes of the maxillary sinus in response to TMJ ankylosis. The gained information can assist in evaluation and the surgical planning concerning the maxilla and hence the maxillary sinus in such group of patients. It is hoped to minimize the possibility of hazards to the surrounding structures during any post ankylosis maxillary surgical procedure.

It has been reported that temporomandibular joint ankylosis TMJ induces skeletal changes include replacement of the involved joint by a mass of abnormal osseous tissue, prominent mandibular angle, decreased ramus height; accentuated antigonial notch identifies the affected side. The forehead become narrow, the coronoid process become more thickened due to abnormal contraction of the temporalis muscles. In unilateral cases the contra lateral hemi mandible become relatively larger and more flattened and in bilateral cases retruded chin may result. (7-12)

The condylar position and the glenoid fossa were inferiorly located in the affected side. The altered condylar and gleniod fossa positions might be a natural attempt to keep the underdeveloped mandible in a more anterior position. Posterior mandibular rotation and changes in mandibular morphology have been attributed to persistent suprahyoid muscle tension in an attempt to counteract limitation of joint movement and improve airway.(13-15)

The normal adult maxillary sinus is a pyramidal in shape, with the nasal wall represents the base and the lateral apex extending into the zygomatic process of the maxillary bone, or into the zygoma. The average volume is 15 cm3, with the dimensions of 33 mm in height, 23–25 mm in width, and 34 mm in the anteroposterior axis. Frequently encountered variations in antral volume and configuration involve posterior extension toward the zygoma, and inferior pneumatization into the dental alveolus about the roots of the posterior teeth, or between them in edentulous areas. Anteriorly, the maxillary sinus does not extend beyond the first premolar tooth, with the canine and incisor teeth positioned below the nasal cavity. (18-21)

The present study comprised 33 persons. All patients were selected from those attending the out-patient clinic of Department of Oral and Maxillofacial Surgery, Faculty of Oral and Dental Medicine, Cairo University, Cairo, Egypt. They were distributed into two groups; Ankylosis group (group I), it included 12 patients suffering from TMJ bony ankylosis with 21 affected joint (21maxillary sinus). Control group(group II), it included 21 normal subjects (42 maxillary sinuses).These subjects having the same age range mean and sex percentage. The control subjects were obtained from patients with other medical condition in whom no abnormalities of the maxillary sinus were detected. Consequently CT was not performed particularly for the maxillary sinus to avoid extra radiation hazard, the procedure was explained fully and their consents were obtained. 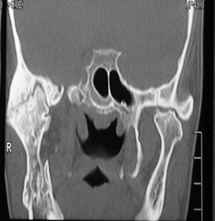 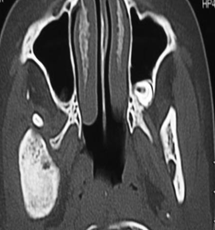 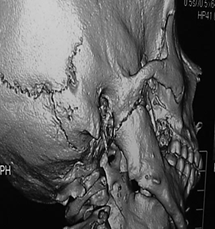 Diagnosis of the TMJ bony ankylosis was established on the basis of careful history, thorough clinical (Fig. 1) and radiographic examinations. Routine preoperative laboratory investigations for general anesthesia and surgical intervention were performed in line of management of those patients. Radiology included digital panoramic radiograph (Fig.2) and computed tomography CT (Fig. 3). Medically compromised patients were exempted according to clinical and laboratory investigation. It has been specifically recorded age, gender, etiology, onset and duration of ankylosis, existing facial asymmetry, maximal interincisal opening and postoperative complications that might be encountered as results of previous surgery (Table 1). All the maxillary sinuses were asymptomatic and had no evidence of inflammation or hypoplasia in the CT finding and had no previous history of any pathology such as fracture, cysts, tumors or paranasal sinus surgery or upper airway surgery. Special measurements for recording the dimension of maxillary sinus volume in group I and II were obtained from CT.

Assessment of the maxillary sinus volume by computed tomography:

All CT examinations were done with a multidetector CT scanner (Aquillion 64, Toshiba Medical, Tokyo Japan).The scan parameters were 120 kV, 300mA. Scanning was performed in the standard axial plane with the helical technique (a FOV of 18 cm, a pitch of 0.562, a rotation time of 0.35 sec, a section thickness of 0.5 mm and a matrix of 512×512).The patients were scanned in a supine position to obtain the image plane parallel to the Frankfurt plane. All the image data sets were displayed on the color video monitor transferred from the CT scanner to the Personal computer workstation, and the data sets were analyzed using 3D medical imaging software.

Maxillary sinus volume was measured by the digital image processing CT program (vitrea workstation). The volume of the maxillary sinus was measured semi-automatically. A volume of interest was applied manually on each axial slice. The contours of the maxillary sinuses were digitized by tracing images with a crosshair pointer by advancing the cursor along the outlines seen in the images displayed on the monitor (Fig. 4). The scales on the CT images were used for coordinates and for calibration (units set to mm) for each section before the data for the contours of the maxillary sinuses were entered into the computer (Fig. 5). The computer stored the X and Y coordinates as a sequence of points along the traced outlines. The vertical distance between each section, which was the same as the CT slice thickness, provided the Z coordinate.

Each serial section was successively entered from the alveolar process to the infraorbital margin at the same manner. Hence, the volume of each section was

Where, dS is the area of the maxillary sinus in a given section and Δh is the slice thickness of the section. Hence, the volume (V) of the region from the antral floor to a height of n mm was calculated as the sum of the volumes of each section (dV), that is, according to the formula(22) 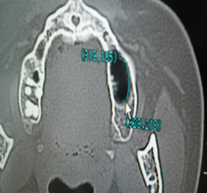 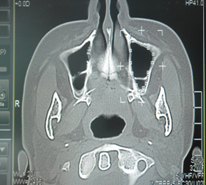 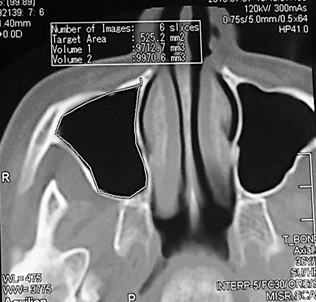 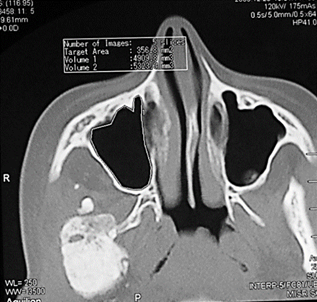 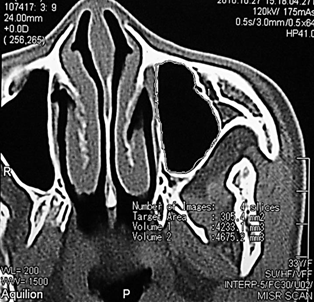 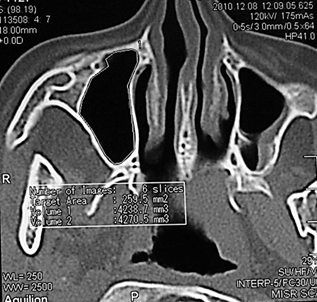 The data of maxillary sinus were collected from ankylosis (group I) and control (group II), tabulated and statistically analyzed. Mean, standard deviation and student T test were used for comparison of the volume change in maxillary sinus in response to TMJ ankylosis.

Study and analysis of the maxillary sinus volume obtained from the computed tomography CT measurements in the subject and control groups according to the planned program revealed:

1)         Comparison of the maxillary sinus volume (MSV) in ankylosis group and control group:

Table (2). Comparison of the MSV between group I and group II.

*Significant decrease in ankylosisgroup (group I)

2)  Effect of the duration of TMJ ankylosis on MSV.

Distribution of ankylosis group according to the duration of the ankylosis into two subgroups (D1 (<21 years) and D2 (≥21years)) it has been detected that there was decrease in the MSV mean in subgroup D2 with duration ≥21years this decrease was statistically significant with P-value (0.048). (Table 3)(Fig. 6)

Table (3). Comparison between subgroup D1and D2 as regard effect of the duration of TMJ on MSV.

3)  Effect of the Age at Onset of the TMJ ankylosis on the MSV.

Distribution of ankylosis according to the age at onset into two subgroups (A1 (<5 years) and A2(≥5years)) it has been detected that there was mild decrease in MSV in subgroup A2 and this decrease was statistically non-significant with P-value 0.74. (Table 4)(Fig. 6)

Table (4). Comparison between subgroups A1 and A2 as regard to effect of the age at onset on the MSV.

Distribution of ankylosis group according to recurrence of the ankylosis into two subgroups (R1 (recurrent) and R2 (fresh)) it has been detected that, there was decrease in the mean in of MSV in fresh cases subgroup and this decrease was statistically significant with P-value 0.053. (Table 5)(Fig. 6)

Table (5). Comparison of MSV between recurrent and fresh cases. 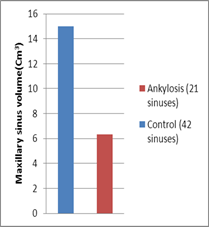 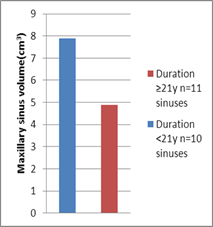 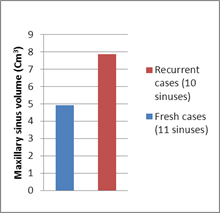 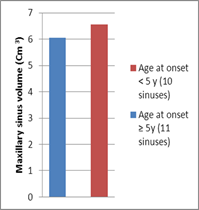 Fig. (6). Bar chart showing the mean MSV in ankylosis and groups of the study.

The present study was planned to assess the changes of maxillary sinus that might be induced by TMJ bony ankylosis. These anatomical variations in the maxillary sinus must be recognized prior to endoscopic sinus surgery, various dento- alveolar maxillary surgery, and post-ankylotic orthognathic surgery, hoping to avoid oro-antral communication, orbital penetration, nasal airway injury or any other complications. The marked findings of the present research could be considered contribution to post ankylotic oral and maxillofacial surgery.

Accuracy and reliability of CT are well documented. Previous studies have shown that dimensions of maxillary sinuses from measurements on human skulls were similar to those obtained by CT scans and the consistency of measurements of the paranasal sinuses by the use of CT images. This opinion is supported by reports of Cho SH (17), Uchida (22),Sahlstrand (23), and Emirzeogluet al.(24)

The present study revealed marked reduction in maxillary sinus volume (MSV) among patients of TMJ ankylosis. These changes could be attributed to compensatory reduction of the size of maxilla and its position, lack of vertical alveolar growth and consequently the lower part of maxillary sinus. This explanation is concordant with the opinion of Stabrun(13) ko EL (16)Moorthy (25) Tasanen (26)Björk(27)Moss(28), and Kjellberg(29) and associate. These findings could be attributed to lack of functional stimuli transmitted from the mandible to maxillary bone by direct articulation with temporomandibular joint and masticatory stimuli, furthermore it has been reported that TMJ ankylosis negatively affects upper airway volume as well as backward position of the tongue and hyoid bone so reduction of the volume of maxillary sinuses corresponds with overall affection of upper airway with lack of sinus pneumatization.(30-32)

The present study has shown that the duration of the TMJ ankylosis has marked negative effect on the MSV, where there was significant reduction in the mean of MSV in patients more than 21years and this finding was expected as the long duration aggravates micrognathia and skeletal abnormalities. This finding is supported by Munro(33) study who stated that the degree of mandibular and facial deformities depends on the duration of the TMJ ankylosis. Thus, early diagnosis and treatment are recommended.

In the present study six out of twelve patients had recurrent TMJ bony ankylosis and they had subjected previously to gap arthroplasty and reankylosis. The average volumes of the maxillary sinus in patients who had not undergone an operation for TMJ ankylosis management (fresh cases) showed reduced average volume as regard to patients who had undergone (recurrent ankylosis cases), and this difference was statistically significant and this may be ascribed to the soft tissue functional stimuli and bone remodeling in the periods between releasing the TMJ bony ankylosis and reankylosis.

We would like to appreciate Dr. Nissrein Khiry, Lecturer of Oral & Maxillofacial Surgery, Faculty of Oral & Dental Medicine, Cairo University for her kind help during surgical managements of patients of this research.