The most important endogenous factor that affects the success of implant osseointegration is the insufficient quantity of bone. The high rate of resorption following early or traumatic extractions usually leads to a very narrow ridge, particularly in maxilla. An adequate height might be available for placement of endosseous implants but the width is often deficient, as seen in the Class IV edentulous ridge (knife-edge alveolar ridge) [1]. Reduction in the width of an edentulous ridge may make the final prosthetic results less than ideal from functional and aesthetic aspects because of the palatal or lingual position of the implants [2].

For the correction of a Class IV edentulous ridge, several techniques have been mentioned for widening the alveolar ridge, including osteoinduction using appropriate growth factors such as bone morphogenetic proteins (BMP) or revascularized bone grafts, osteoconduction (the graft serves as a scaffold for a new bone formation), guided bone regeneration, alveolar distraction osteogenesis and splitting osteotomy with expansion of the ridge [3-8]. There are different techniques to perform splitting osteotomy of the alveolar ridge such the osteotome technique, the ultrasonic surgery, the staged ridge splitting technique……etc [9-10].

LASER has many applications in Oral & Maxillofacial Surgery. The high level power LASER (as CO2 LASER) has been used for ablation of several pathological lesions affecting the Oral & Maxillofacial region. Also, the low level power one (as Diode LASER) was tried as a therapeutic modality for the management of myofascial pain and peri-implantitis. Some authors have reported that, laser application alone or combined with administration of vitamin C would reduce healing time and speed up the osseointegration of dental implants [11,12]. So, the aim of our study was to evaluate the effect of LASER on early loading of dental implants associated with splitting osteotomy in patients having Class IV maxillary edentulous ridge.

Twelve postmenopausal females having bilateral Class IV maxillary edentulous ridges and seeking dental implants were participated in this study (Fig 1). Their age ranged between 50-60 years with a mean age of 55 years. All involved patients were free from systemic diseases, non smoking and have not para- functional habits. Clinical and radiographic examinations have shown missing maxillary posterior teeth a long time ago. They have good oral hygiene and the range of alveolar width was ranged between 3 to 4mm.The patients were randomly divided into two equal groups (6 in each). Twelve implants were inserted in each group (one in each side) following maxillary ridge expansion by osteotomes. In the study group the patient received LASER application sessions after insertion of the implant, while the second group acted as a control. 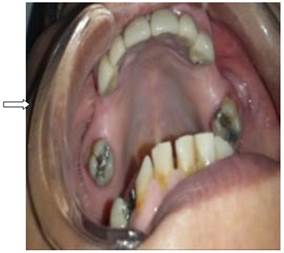 All patients were informed about the study procedures and the application of LASER. The principles of Helsinki Declaration involving human subjects were followed. All patients received thorough explanations and signed a written informed consent prior to surgery.

All patients were prepared preoperatively by scaling and root planning. For every patient a mouth wash (Chlorexidine glucomat 0.12%) was prescribed 4 times per day for a period of one week before surgery. One hour before surgery, all the patients received orally 1 gm of amoxicillin /clavulanate potassium and Dexamethasone via IM injection. Using local anesthesia, a slightly palatal crestal incision was performed. A buccal full-thickness flap was reflected to expose the alveolar ridge. The width of the alveolar Crest (2 mm below the summit) was measured using calipers. An initial osteotomy was made on the mid crestal bone and under copious irrigation with sterile saline the proposed implant site was marked with an initial bur (1.8 mm in diameter) at 800 rpm & torque 30Ncm. An initial osteotome has several cones (started by 2mm and ended by 2.7mm; Hu-friedy, USA) was used to expand the narrow ridge (Fig 2, 3). It was inserted into the osteotomy area and manually pressed, and rotated until the desired depth was reached. Successively larger osteotomes in diameter were used to expand the osteotomy area to the desired diameter. Then, the implant (Dentium implant system) was seated manually by screw driver to reach 2/3 of the implant length and completed by using wrench to be submerged 2mm below alveolar crest (Fig 4). A covering screw was used to plug the implant. Finally, the reflected flap was repositioned and sutured using 3/0 black Silk. 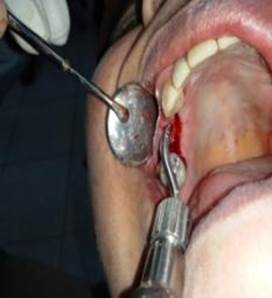 Figure 2. A photograph showing expansion of the maxillary ridge. 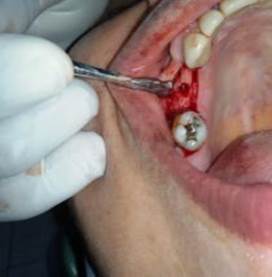 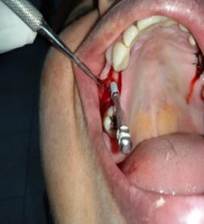 Figure 4. A photographshowing insertion of the implant.

Post-operatively antibiotics (amoxicillin / clavulanate potassiumtablets 1gm/ 12hr and anti-inflammatory drugs (Cataflam tablet 50 mg two times/day) were prescribed for five days. At the second day after surgery, all patients were instructed to rinse 4 times per day with a mouth wash (chlorexidine glucomat0.12 %). Sutures were removed 7 to 10 days post-operatively. Two weeks after surgery, the dental prostheses were adjusted and refitted to be used by the patients.

Regular checkups were made on weekly bases during the first month then at 2- 6 months post-operatively to evaluate the healing process of the surgical site and the osseointegration of the implants. For every patient, CBCT examination was made immediately after surgery and at two and six months later. The CBCT was used to measure the Bone density around implant (Fig 5). Resonance Frequency Analysis (Osstell ISQ AB, Gamlestadsvagen 3B, SE-41502 Goteborg, Sweden) was used to measure the implant stability immediately and at two and six months for all implants post-operatively (Fig 6). The LASER sessions (three sessions, one every 2 days) were started 2 weeks after surgery for the study group. The pre-adjusted time was 5 minutes. The buccal, palatal and the crestal aspects of the implants were subjected to the LASER beam (diode LASER 840 nm and average power 500 m watt, ONTOAH, KOHTPONB, nA3EPA) while the applicator tip was moving in a continuous slow circular motion without touching the tissues.

Figure 5. CBCT reading of the bone density around the implant. 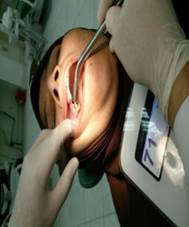 Figure 6. A photograph showing the Ostell device while measuring the implant stability.

In general, all the patients have tolerated uneventfully the surgical procedures and attended the follow up periods regularly. No serious complications have occurred either during or after surgery. A normal healing process of the soft tissue and bone around the implant was observed throughout the study.

Table 1. The mean values of the bone density and implant stability in the study & control groups.

The main etiologic factors which usually lead to a narrow ridge are traumatic extraction, loss of teeth for a long time and severe periodontal diseases. A great challenge faces the implantologists to establish a sufficient space for insertion of dental implant in a narrow ridge. Several techniques such as bone grafting and guided bone regeneration have been previously used to overcome this problem. Nowadays, bone splitting together with placement of dental implants is reported by some authors [13].

In the present study cylinder conical osteotomes were used to expand maxillary narrow ridge. This in fact has many advantages than other techniques where the ridge expansion was performed gradually without heat generation, no need for bone graft or guided tissue membrane and the technique is completed using local anesthesia. Buchter et al, have mentioned that, osteotomes technique exerts lateral compression, which increases bone density and encourages primary retention of the implant [14]. This coincides with the results of the present study as the implant stability values were gradually increased throughout study intervals and in turn increased in bone density values as reported in control group.

As the buccal cortical bone plate in the maxillary posterior region is very thin with low-density trabecular bone; there is a high risk of fracture of the buccal cortical bone plate (even green stick type) during ridge expansion of narrow ridge. So, there is a need for an adjunctive factor to promote the healing process. In literature, it has been reported that, LASER accelerates healing process of both soft &hard tissues. Khadra et al, have studied experimentally the effect of low-level laser therapy (LLLT), GaAlAs diode LASER, on bone healing and growth in rat calvarial bone defects [15]. They found that, the tissue samples from the study animals contained significantly more calcium, phosphorus and protein than the controls. Similarly, histological analyses disclosed more pronounced angiogenesis and connective tissue formation and more advanced bone formation in the study group than in the controls. They concluded that Low Level LASER Therapy may enhance bone formation in rat calvarial bone defects. El-Talawy et al have mentioned that, the early bone maturation and osseointegration after LASER irradiation may be attributed to an increase in number of viable osteocytes in the irradiated tissues [16]. They also concluded that, low level LASER therapy produces a highly reactive and vital peri-implant tissues which can reduce healing times and speed up osseointegration of the implants. In addition, several authors suggested that, application of the low level LASER influences the expression of certain cell activating factors and results in the expansion of metabolic bone activity as well as increases the activity of bone tissue cells [17,18]. This agrees with the present study as early loading of the implants in the study group after 2 months in consistent with the results of the implant stability and bone density measures which showed highly significant increase in values after 2 months of application of low level LASER therapy compared with control group .

De Vasconcellos et al, have reported that, infrared LLLT may improve the osseointegration process in osteopenic and normal bone, particularly based on its effects in the initial phase of bone formation [19]. This agrees with results of our study as the patients involved in this study were postmenopausal and all of them may have mild osteoporosis and showed high significant bone density and implant stability measures in study group after LLLT application at the end of the study.

Depending on the results of the current study we could conclude that, LASER therapy may elevates the success rate of implant oseointegration and play a positive role on early loading of implant after expansion of Class IV maxillary edentulous ridge.