Abstract: Objectives: This study was designed to clarify the changes that might be induced in the maxillary sinus walls thickness in response to TMJ bony ankylosis Subjects and methods: Forty five (45) subjects were included in the study. They were divided into two groups Group I, (patients group) comprised fifteen 15 patients were suffering from temporomandibular joint bony ankylosis (26 maxillary sinuses involved) and Group II, (control group) contained thirty (30) healthy volunteer. Maxillary sinus walls thickness has been measured by computerized tomography scan for both groups and was compared. Results: There was significant increase in mean thickness of all walls of maxillary sinus in patients group. The thickness of lateral wall of recurrent cases of TMJ ankylosis showed significant decrease when compared with the non-recurrent cases. Conclusion: Observable Increase in the thickness of maxillary sinus walls. This may be attributed to bone apposition from outer side without resorption from inner side. This explanation is ascribed to lack of pneumatization associated with hindrance of upper air way that usually existing with cases of TMJ bony ankylosis.

Temporomandibular joint (TMJ) ankylosis usually impairs the growth of lower jaw and lead to facial skeletal deformities. Review of literature showed that this subject its effect on maxillary sinus wall thickness has not investigated. This study was designed to clarify the changes that might be induced in the maxillary sinus walls thickness in response to TMJ bony ankylosis. The available researches were directed to study the lateral wall in procedure of sinus augmentation. The present study was intending to utilize the versatility of computed tomography (CT) to depict accurately the changes expected in the maxillary sinus walls thickness. CT plays an important role in the diagnosis and treatment of the TMJ ankylosis and paranasal sinuses due to its multiple advantages as compared with other conventional radiographic methods [1,2].

Surgical correction of the residual facial deformities of TMJ bony ankylosis is an important part and exceeds the significant release of the ankylosis itself. The present investigation can provide prediction for the possible changes of the maxillary sinus wall thickness. The gained information can assist in evaluation and surgical planning concerning the maxilla and hence the maxillary sinuses. The collected data in such group of patients will be of value in post ankylotic corrective maxillary orthognathic surgery.

The present study comprised forty five (45) subjects. They were selected from those attending the outpatient clinic, Department of Oral and Maxillofacial Surgery, Faculty of Oral and Dental Medicine, Cairo University. They have been classified into two groups:

Group II, (control group) comprised thirty (30) healthy volunteer subjects with mean of age (24.033 years). They have been obtained from patients with other medical condition in whom no abnormalities of the maxillary sinus were detected. Consequently CT was not performed particularly for the maxillary sinus to avoid extra radiation hazard. The procedures have been explained and their consent has been obtained.

The patients group (group I) were distributed by median into 2 subgroups according to the duration of ankylosis (subgroup D1 and D2) where subgroup D1 (13sinuses) with duration up to 10 years. While in subgroup D 2 (13 sinuses) with duration more than 10 years. They were distributed also according to recurrence of ankylosis into (subgroup R1and R2) where R1 (12 sinuses) non-recurrent case and subgroup R2 (14 sinuses) recurrent cases.

All the subject in group I and II were subjected to computerized Tomography (CT) of the facial skeleton (coronal, axial and 3D reconstruction) (Fig. 1) for assessment of the maxillary sinus wall thickness. All the computed tomography (CT) examinations were done with a slice multidetector (CT) scanner (Toshiba, Aquillion 64, Japan). Scanning was performed in the standard axial plane with the helical technique (a FOV of 18 cm, a pitch of 0.562, a rotation time of 0.35 sec, a section thickness of 0.5 mm and a matrix of 512×512). The subjects were scanned in a supine position to obtain image plane parallel to the Frankfurt plane. All the image data sets were transferred from the CT scanner to personal computer work station, and the data sets were analyzed using 3D medical imaging software (on vitra work station).

Fig. 2. coronal cuts of right and left sides [Red Lines] as used as guides to select levels of the axial cuts, case number 4.

Step1: Reference Points for Determination of Radiographic Walls of the Maxillary Sinus:

At the selected axial cut: Four reference points (A, B, C & D) were determined from inner side of maxillary sinus (Fig.3). Points were allocated as:

These points determine the anterior, lateral, medial and posterior walls of maxillary sinus by connecting lines.

Step 2: Radiographic Definition of Walls of Maxillary Sinus on the Axial Cuts (Fig. 3):

Step 3: Determination of Reference Points for Measurements of Thickness: (Fig. 4).

The thickness of maxillary sinus walls at selected axial cut is represented by points of intersection of the perpendicular line from:

The data were collected and tabulated, descriptive and analytical statistics using Statistical Package for Social Sciences (SPSS) version 21, 2013. Comparison was carried out between patient and control group, also between bilateral ankylosis cases and control group as well as between subgroups among the cases of ankylosis. Student test were used (t-paired) for evaluation of the changes occurring in thickness of maxillary sinus walls. P value was significance ≤ 0.05.

On comparison between the mean thickness of the anterior (TAW), medial (TMW), lateral (TLW) and posterior (TPW) walls of maxillary sinus in patients and control group there were an increase in mean thickness of all walls of patients group. This increase was statistically significant with P-value (< 0.05). (Table 1 - Fig, 5) 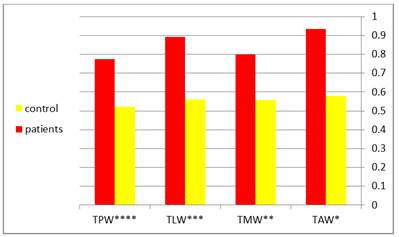 On comparison between the mean thickness of the anterior (TAW), medial (TMW), lateral (TLW) and posterior (TPW) walls of maxillary sinus in patients with bilateral ankylosis and control group it was detected that there were an increase in mean thickness of the patients with bilateral ankylosis. This increase is statistically significant with P-value (< 0.05). (Table 2 - Fig. 6) 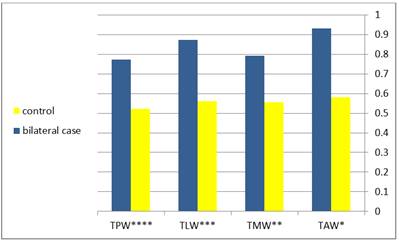 3) Effects of the duration and recurrence of TMJ ankylosis on the maxillary sinus walls thickness.

Table 3. Statistical comparison between subgroup D1and D2 as regard effect of the duration of TMJ on the maxillary sinus walls thickness.

Table 4. Statistical comparison of the walls thickness of maxillary sinus between fresh and recurrent cases. 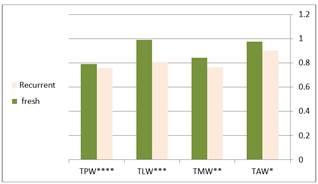 The present study was directed to assess the effect of temporomandibular joint bony ankylosis on the wall thickness of the maxillary sinus. This study in normal and abnormal subjects is demanded in the specialty of the oral and maxillofacial surgery. The skeletal deformities associated with TMJ bony ankylosis are not limited to the lower jaw; but it extends also to involve the rest of facial skeleton. The induced anatomical variations in the maxillary sinus due to ankylosis must be identified prior to dental implant, posterior maxillary dentoalveolar surgery and maxillary orthognathic surgery to avoid complications. The obtained data will enrich the field of oral and maxillofacial surgery and help post ankylotic maxillary orthognathic surgery. Review of literature in this subject has revealed that the bony walls thickness of maxillary sinus have not received the necessary attention. The reported studies were directed to explore the lateral wall for procedure of sinus augmentation and in the field of otolaryngology it was directed to evaluate the changes in the bony thickness in response to chronic rhinosinusitis.

The measurement obtained by computed tomography scans, whether two dimensional (2D) or three dimensional (3D) are considered reliable and accurate and match the measurement obtained by skull osteometry. These findings were supported by many authors [9,11,16,19,24,29,35,41]. In this study the mid region of the maxillary sinus has been selected as a site for wall thickness assessment being clear with no masking structures as zygomatic complex and infraorbital buttress. The adjacent structures might influence the accuracy of the topographical imaging of maxillary sinus.

The infraorbital foramen has been utilized as reproducible reference point being the most reliable landmark. This opinion is reinforced by studies of Cho et al [29] and Sahlstrand et al [9]. The axial cuts of CT scans have been selected for measurement being an original cut not reformatted in CT scans and the four walls of sinus are evident without superimposition. This opinion is supported by previous studies of Cho, et al [29], Sahlstrand et al [9] Kim et al [28] and Joshua, et al [42].

Temporomandibular joint bony ankylosis induces secondary changes in the maxilla affecting its size. This ascribed to lake a secondary or a compensatory response to the requirement of the soft tissue functions i.e. these findings could be attributed to lack of functional stimuli transmitted from the mandible to maxillary bone either through articulation with temporomandibular joint or due to lack of chewing and masticatory stimuli.

Reduction of maxillary sinus volume was reported among patients of temporomandibular joint bony ankylosis by Dehis, and associates [46]. Increase in the thickness of walls may be attributed to this reduction of volume which is expressed in the form of bone apposition from outer side without resorption from inner side. This explanation is ascribed to lack of pneumatization associated with hindrance of upper air way and usually existing with cases of TMJ bony ankylosis as reported in previous studies [43-45].