Abstract: The objective of this study was to evaluate and compare epidemiological factors, associated diseases, exploration and outcomes in patients with Brown Syndrome (BS) operated of superior oblique (SO) sharpening. This is a cross-sectional comparative study. 24 patients with BS operated of SO sharpening were enrolled in this study. The adduction-elevation restriction (AER), torticollis, visual acuity, treatments, trochlea triamcinolone-injections, age of surgery and systemic diseases were assessed. Fisher’s test was used to analyze if there is any association between the variables analyzed with systemic diseases. Differences between preoperative and postoperative status were analyzed using the Wilcoxon test with Bonferroni correction post hoc. We found a preoperative mean AER (0-3) was 2.88. One year after the surgery, mean AER it was 0.59 (P<0.001). Preoperative torticollis was observed in 79.1% patients. Torticollis was solved in 95.8% of cases in one year follow-up (P<0.001). Most common concomitant diseases were allergic asthma (12.5%), adenoid hypertrophy (12.5%), and heart murmurs (12.5%). No significant association of systemic disease with postsurgical torticollis or AER was found (P>0.05). In conclusion, SO sharpening constitutes a safe and effective surgery for BS, with fewer complications than other techniques previously described.

Brown Syndrome (BS) is the most common limiting vertical strabismus, and it involves restriction in the elevation of the affected eye when it is in adduction. This is a condition in which there is a disturbance of muscle tendon of superior oblique (SO) and trochlea and it might cause severe torticollis that may be confused with musculoskeletal pathology.

The causes of acquired BS may be a sinus infection, autoimmune processes or trauma among others. In congenital cases, however, the origin is unknown.

BS treatment is a matter discussed even today. Different surgical procedures have been described in literature [2]. However, some authors prefer not to operate these patients as postoperative complications and even worsening of baseline status have been reported [3].

The main objective of this study is to compare preoperative and postoperative status (both month and 12 months-visit) of patients operated of SO sharpening, focusing in the adduction-elevation restriction (AER) (Figure 1A) and torticollis (Figure 1B), as well as in the systemic associated pathology. 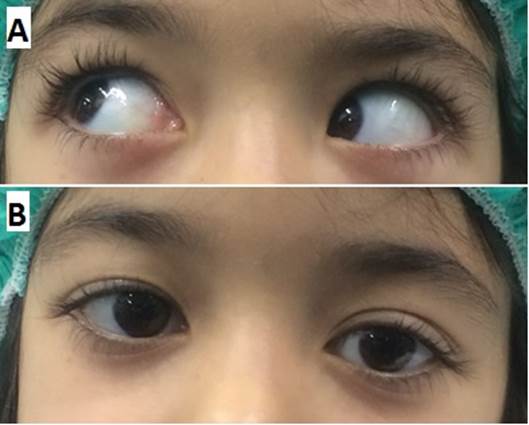 Figure 1. Left eye Brown Syndrome showing grade 2 of 3 of adduction-elevation restriction (A) and torticollis (B).

This cross-sectional study was carried out at Ramon y Cajal University Hospital, Madrid, Spain, between April 2013 and September 2013. The protocol was approved by the Ethics Committee and the study adhered to the tenets of the Declaration of Helsinki. A signed written consent form was obtained from all participants before inclusion.

24 subjects were included in this study.

Fisher’s test was used to analyze if there was any association between the variables analyzed with systemic diseases. The differences between preoperative and postoperative status were analyzed using the Wilcoxon test with Bonferroni correction post hoc. A P value less than 0.05 was considered statistically significant.

None factor was associated with the "plus" or "true" BS (P>0.05). Changes in preoperative and postoperative status are shown in table 1. Preoperative mean AER (measured from 0 to 3, with 3 reserved to the maximum AER) was 2.88 ± 0.34. One month after surgery mean AER was 0.92 and in one year of follow-up it was 0.59. A 0 value of AER (Figure 2) was found in 58% of patients in one year visit and a 1 value in 25% of patients. Preoperative torticollis was observed in 79.1% patients. The most common type was torsional torticollis (66.6%). Horizontal torticollis occurred in 5 cases, 3 of them associated with torsional torticollis. Torticollis was solved in 95.8% of cases in one year follow-up visit (P<0.001).

Figure 2. One-month postoperative results showing no adduction-elevation restriction as well as no torticollis.

Triamcinolone injection in trochlea was not related with the prognosis, the existence of torticollis, or the value of AER (P>0.05).

Most common concomitant disease associated with BS is related to the respiratory tract (12.5%), including allergic asthma and adenoid hypertrophy. In fact, the single patient with postsurgical overactive SO was associated with pulmonary stenosis, asthma and Gilbert syndrome. Cardiovascular diseases were also associated with BS. Heart murmurs were depicted in 3 patients (12.5%), due to a ventricular septal defect closure in one patient, who presented late torticollis in one year follow up visit (4.1%). Musculoskeletal disease was found in 2 patients (8.3%), including recurrent hip pain and lumbar vertebral column scoliosis. Although the singles cases with postsurgical overactive SO and late torticollis were related with systemic disease, we found no significant association of systemic disease with postsurgical torticollis or worse prognosis after surgery (P>0.05).

BS represents the most frequent vertical restrictive strabismus and was described by Brown in 1950 [4]. The etiology is controversial. One theory states that BS is due to a possible shortening and a reflect contracture of the SO [4]. More accepted theories involve an imbalance of trochlea-tendon space [2], and a lateral rectus muscle lower sliding caused by pulley disturbances [5].

BS incidence is around 0.2% of patients with strabismus, with a slight predominance of females and right eyes [6, 7]. Similarly, we found a higher BS incidence in women (66.6%), but a slightly higher number of left eyes involved (54.1%). One single patient presented with a bilateral BS (4%), less than other series that describes a 12% [7].

There is no consensus on the surgical indications of BS. Some authors suggest observation in all cases [3], due to the existence of reported cases with spontaneous restriction resolution [8-11]. Kaban et al [12] reported 11% of cases that solved without surgery in more than 4 years of follow-up, but also mentioned a worsening of 4% patients during follow-up. It is also been described the BS resolution associated with a posterior hypertropia [13].

On the other hand, other authors indicate surgery in mild-moderate BS [14]. Tenectomy and tenotomy of SO are the best known techniques to improve the AER [15]. However, this technique associates more than 25% cases with SO secondary paralysis [16]. Other reported surgery was the extension of the SO with a silicone band, which decreases to 11% the incidence of iatrogenic paralysis of SO [17]. Extrusions and adhesion of the implant are the main complications associated with this surgery [18]. Kokubo et al showed good results by performing a reconstruction of the trochlea in BS patients. However, only four cases were described [19].

Recently, Suh et al have demonstrated, using magnetic resonance imaging, that the etiology of this disease is not that the SO muscle belly limits supraduction in adduction, but the interaction of the SO tendon with the trochlea is what origin this misbalance [22]. For this reason, SO sharpening might correctly modifies and solves BS. In our experience, SO sharpening constitutes a safe and effective surgery for BS, with fewer complications than other previously described techniques.