Molecular Orbital Theory (MOT) has been used extensively in physical, inorganic, and organic chemistry to predict physical properties of a single molecule, such as orbital energies, bond length, bond order, bond energies, bond delocalization energies, and electron densities [1, 2, 3]. An important parameter that has been employed in MOT and has been used extensively in the Hückel method for molecular systems containing different atoms is the bond integral parameter k. This parameter is considered to be a scaling factor for bond integral calculations.

The bond integral parameter k is very useful for large and complex molecular systems with many different types of atoms, such as DNA, and allows the general molecular orbital energy equation [1, 2, 3, 4] to be solved. One such application [4] pertains to the determination of the strength of the electronic coupling between two adjacent base pairs for a B-DNA molecule, where k values were only determined for 2pσ and 2pπ atomic orbital pairs, which resulted in the calculation of 342 atomic orbital combinations. These k values were utilized in a 361 element energy matrix for the calculation of the molecular orbital wave function coefficients, which were then used for the electronic coupling computation. What is new is a detailed analysis of k for different atomic orbital combinations and interactions resulting in a more comprehensive understanding of some important and interesting features, as well as a comparison between the calculated and empirical values of k for a carbon dimer.

where ψi represents the wave function (atomic orbital) for atom i, ψi* the conjugate of ψi, and dv the volume element. Equation (1) represents the total overlap between two atomic orbitals because the integration is performed over all space. Sa,b can be expressed as

where (2) represents the basic definition of the definite integral in (1). The summation is over

and δv is the change in the spherical volume.

An atomic orbital is a mathematical function that describes the wave-like behavior of a single electron in an atom [6]. This function can be used to calculate the probability of finding any electron of an atom in any specific region around its nucleus. The term also may refer to the physical region or space where the electron can be calculated to be present, as defined by the particular mathematical form of the orbital [7]. The atomic orbitals that will be considered in this study are Slater-type and are designated as s and p orbitals. Examples of s and p orbitals for σ and π interactions are illustrated in Fig. 1.

The most general equations, which were derived from (1), that describe the overlap integral S are

, α’ and β’ are defined as constants from exponential functions that are used in describing Slater-type atomic orbitals,

, na and nb represents the quantum numbers for atoms a and b, δ is a constant having a value of 0 for n=1, 2, 3 and 1 for n=5, R is the internuclear distance, ξ and η are spheroidal coordinates, where

, ra and rb are distances of an electron from atoms a and b,

and μa and μb are Slater values that are listed in Table 1 (for the calculation of these values refer to the Appendix).

For the first set of computations, the following equations are utilized.

With the ability to determine values for

, the k values can therefore be obtained. For the second set of computations, a simple equation is applied,

, defined below; for this work, the bond length of a carbon dimer was used.

the reduced mass (in atomic mass units), and c the speed of light (in cm/s). From the reported value of the rotational constant (

was found to be

Å, which was employed in the calculations for the results and discussion section.

In order to compare the empirical values of

with the calculated values, the empirical values were obtained by using the celebrated empirical Morse potential function [11] with a shifting parameter to calculate the interaction energy between two atoms

where the bond dissociation energy

the equilibrium distance, C a constant for shifting the reference line from zero to the continuum’s edge, and

are determined from the experimental values of

, the values of V(r) can easily be obtained. Therefore, the bond integral parameter can be calculated empirically as

For the first set of calculations, the overlap integral S at different energy levels (principal quantum numbers) is depicted in Figs. 2 & 3. Figure 2 reveals two sets of curves defined by the general trend of S as a function of bond distance. The first set, which represents two s orbitals with a σ interaction for

, has a maximum at

Å and a minimum at

Å. The second set shown in Fig. 2, which represents two p orbitals with a σ interaction, for

(no p orbitals exist for

) also has a maximum at

Å and S approaches zero as d extends to infinity. However, each curve in the second set of data also contains a local minimum at a specific distance that is dependent on n. The minima occur at a negative value of S, where the total overlap is dominated by the negative terms in (2). The first set of curves in Fig. 2 shows that the magnitude of S is largest for

for all distances greater than zero. Similarly, the second set of curves in Fig. 2 also illustrates this same trend. This trend is predominately due to an increase in the size of the atomic orbitals as n increases. Furthermore, the position of the minima in the second set of curves shifts to larger distances as n increases, which is consistent with the trend noted above. Each minimum in the second set of curves represents a distance where there is an optimum overlap between the two p orbitals oriented along their bond axis. The slopes of all the curves in Figs. 2 and 3 are indicative of the changes in size and shape of the orbitals. The maximum and minimum variation in the overlap integrals correspond to the orbital interactions 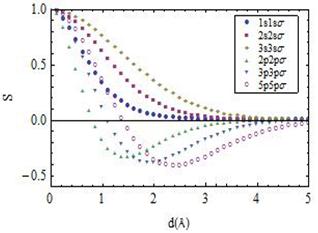 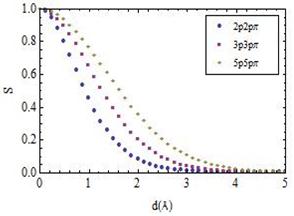 The curves in Fig. 3 represent two p orbitals in a π interaction for

. They are similar to the first set of curves in Fig. 2 but with slightly different slopes, which is due to the difference in the shape and size of the orbitals (Fig. 1). These curves also exhibit the same trend (largest S value for the largest n value) as before, indicating a larger overlap value (magnitude) for a corresponding fixed distance as n increases.

Because a carbon dimer was considered for the calculation of the k values, only the

all have positive overlap integral values, whereas the orbital interaction

does not. The inverse effect is a result of having a negative overlap integral value for

Å, resulting in a negative

value. All four curves in Fig. 4 intersect at the same point, where

. This is expected because k represents the ratio of

. The maximum and minimum variations in k occur for the orbital interactions

respectively. Note that the

Å, and that these k values are less than those for the

interactions. Hence, at these distances 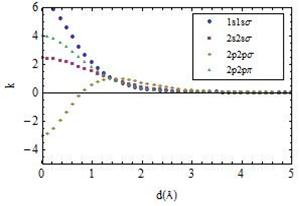 Therefore, for bond lengths less than

interactions dominate, but at distances between

It is also noteworthy that the orbital interaction

has a k value of zero for

Å, which is not true for the other curves. This corresponds to the overlap integral having a value of zero for the orbital interaction

as illustrated in Fig. 2. Therefore, at

Å, no σ bonding between 2p orbitals can occur, which implies that for any stacked conjugated molecular system, such as stacked benzene molecules or base pairs of a B-DNA molecule, there will be no charge transfer between the stacked molecules at this distance.

With regards to the empirical values of k, experimental values of the vibrational constants

for an electronic state

[11, 14] and a C value of -7.6 eV were considered. As depicted in Fig. 5, the profiles of both the calculated and experimental curves are quite similar with both having the same maximum value, but at slightly different positions, and almost the same value at

Å and approaching zero at

Å. Also indicated is the fact that the experimental values decreases somewhat more quickly as compared to the calculated values. However, the close agreement between the two curves and the information presented earlier validates the utilization of the overlap integral calculation method for the determination of the bond integral parameter k. 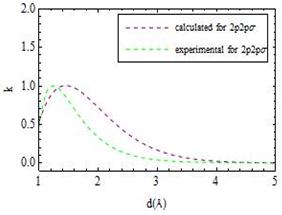 In this paper it is shown that the analytical method for calculating the bond integral parameter by using the overlap integral is indeed a genuine approach. The results revealed that different atomic orbitals in different interactions can have almost the same, if not the same, k values. The important features of the different atomic orbital combinations with regard to magnitude and profile disclose the fact that for

, no σ bonding will occur at specific distances. The validation of this method is supported by the close correlation between the analytical and empirical results.

Special thanks go to Andrew House for proofreading this manuscript and colleagues for their general support.

The general equation for calculating the Slater μ-values is

, b is number of electrons in the group with principle quantum number

, and c is number of electrons in all groups with principle quantum number

To obtain the values shown in Table 1, only the 2s,p group needs to be considered. Therefore, (A1) becomes

As an example, we consider a carbon atom, where

and the electronic configuration is