The study of nonlinear chemical dynamics (NCD) has flourished in the past three decades [1-10]. The prototypical phenomenon of NCD is chemical oscillation. Complex dynamical behaviours such as periodic, quasiperiodic and chaotic oscillations have been observed in certain nonlinear chemical systems. For example, in Belousov-Zhabotinsky (BZ) reaction, Roux [11] and Swinney [12,13] and co-workers revealed a class period doubling sequence leading to chaotic behaviour and Hudson and co-workers [14,15] found chaotic behaviour interspersed in sequences of mixed-mode oscillations. Another oscillation reaction known as Peroxidase - Oxidase (PO) has been extensively investigated over the years. In the PO reaction, Yamazaki et al. [16] observed damped oscillations and Nakamura et al. [17] found sustained oscillations. Recent studies of the PO reaction have identified not only a period doubling route to chaos but also unstable periodic orbits in the chaotic attractor of the system [18-20]. Quasiperiodicity has also been found [21]. Other systems exhibiting chaotic behaviour include the chlorite–thiosulfate reaction [22] and the cobalt / manganese / bromide–catalyzed autoxidations of p-xylene and cyclohexanone [23]. Although chaos is usually studied in open systems, several recent investigations have demonstrated that transient chaos may occur in closed systems [24,25], where the changing composition of the system as reactants are consumed serves as the bifurcation parameter.

Complex oscillations and chaos have also been studied in many types of electrochemical processes. Many of the studies of electrochemical chaos have utilized metal electro dissolution reaction. For example, Schell and Albahadily [26] studied the electro dissolution of copper in H3PO4 in which simple period doubling as well as period doubling mixed-mode oscillations was found. A series of investigations of the electro dissolution of copper in NaCl and H2SO4 carried out by Hudson and Bassett [27-29] in which a number of routes to chaos such as period doubling, quasiperiodicity, intermittency and Shil’nikov chaos were demonstrated. Studies of the electro catalytic oxidations of formaldehyde, formic acid and various alcohols have also yielded information about mixed-mode, quasiperiodic and chaotic behaviours [30,31]. Experimental studies by Koper et al. [32,33] have characterized the mixed-mode and chaotic oscillations found in the system such as the reduction of an In (III) at a hanging mercury electrode in solutions containing thiocyanate ion.

In the past few years much attention has been focused on the study of transition from periodic to chaotic motion in many dynamical systems with external force being of the form f sinωt [3-5,34,35]. Recently many studies have shown that the effect of different kinds of periodic forcing on these systems is considerable and they can change the dynamical behaviours drastically. For example, onset of homoclinic chaos by a periodic string of pulses modulated by Jacobian elliptic function and periodic δ-function [36], generation of chaotic behaviour by a distorted force [37], anti-control of chaos by certain periodic forces [38], suppression of chaos by δ-pulse [39], stochastic resonance [40,41], nonescape dynamics [42] and the occurrence of horseshoe chaos [43] with different form of periodic forces have been reported.

In this paper, we numerically study the effect of different shape of periodic forces on chaotic oscillation in Brusselator chemical system. The text of the paper is organized as follows. In section II, we analyzed the mathematical model, fixed point and stability analysis of the Brusselator chemical system. The mathematical form of various periodic forces considered in our present work is presented in section III. We analyzed the bifurcation structures due to the applied periodic forces such as sine wave, square-wave, rectified sine wave, symmetric saw-tooth wave, asymmetric saw-tooth wave and modulus of sine wave in section IV. For a particular set of values of the parameters of the system, we numerically integrated the system separately for each periodic force we show the occurrence of various routes to chaos, crises and chaos. Finally section V contains the conclusion of the present work.

The Brusselator is one of the simplest models in nonlinear chemical systems. It has six components, four of which retain constants and the other two permit their concentrations vary with time and space. The classical Brusselator chemical reaction consists of four irreversible steps, given by

Where A and B are constant components, D and E are products and X and Y are the two components variable in time and space. The dynamics of the Brusselator chemical reaction can be described by a system of two ordinary differential equations (ODE’s). In dimensionless form, they are

where a and b are constants with a, b > 0, x and y represent the dimensionless concentrations of two reactants. F(t) is the time dependent external periodic driving force. Over the years, there have been extensive studies in the Brusselator system (Eq.2) [44-48] and the references there in. Recently, Ali Sanayei [49] studied the effect of sinusoidal force in the Brusselator chemical reaction. The unperturbed system (ie F(t) =0 ) has only one equilibrium point (x* , y* ) = (a , b/a) . From the linear stability analysis, the eigenvalues of the fixed point (a , b/a) are obtained as

ia and hence is a center or elliptic. We have observed Andronov – Hopf bifurcation at b=a2 +1 which is shown in Fig. 1(b). 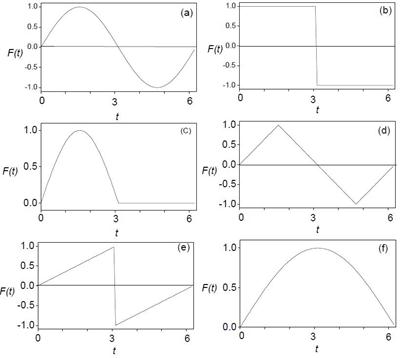 4. Analysis of Bifurcation Structures Due to the Applied Periodic Forces

In this section, we analyze the bifurcation structures due to the different shape of periodic forces applied on the Brusselator system (Eq.2). For our numerical study we fix the parameters values as a = 0.4, b = 1.2 and ω = 0.81. Eq. (2) is solved with different periodic forces by fourth order Runge-Kutta method with time step size (2π/ω)  / 200. Numerical solution corresponding to first 500 drive cycle is left as transient. We analyzed the behavior of the Brusselator system (Eq. 2) by varying the forcing amplitudes of each periodic force. Figure 3 shows the bifurcation diagrams and the corresponding maximal Lyapunov exponent (λm) diagrams for various periodic forces. The maximal Lyapunov exponent (λm) is computed using the algorithm given in Ref. [50]. If λmax < 0 , the disturbed trajectory is attracted eventually to a stable periodic orbit. λmax > 0 reveals an unstable and chaotic trajectory and λmax = 0 means that the disturbed oscillation and the original oscillation stay apart be a constant mean distance for an indefinite duration until perturbed again. When the forcing amplitude f is varied we found many similarities and differences in the bifurcation patterns which is clearly seen in Fig. 3. The magnification of a part of bifurcation diagrams are shown in Fig. 4. Consider the effect of the force f sin ωt. Figure 4(a) shows the bifurcation diagram of Brusselator system (Eq. 2) driven by sine wave force. As f is increased from zero, a quasiperiodic orbit occurs, which persists up to f = 0.00955 and then it loses its stability giving birth to a period doubling orbit. Brusselator system (Eq.2) then undergoes further period doubling bifurcations as the control parameter f is smoothly varied. For example at f = 0.03345, the period-2T orbit becomes unstable and gives birth to period-4T orbit. This cascade of bifurcation continues further as 8T, 16T,…, orbits and accumulates at f = fc = 0.04578. At this critical value of f onset of chaotic motion occurs. When the parameter f is further increased from fc one finds that chaotic orbits persist for a range of f values followed by reverse period doubling bifurcation. At f = 0.481, the reverse period doubling bifurcation disappears and the long time motion settles to a periodic behaviour. That is the application of sine wave force in Brusselator system (Eq. 2) can be used to suppress chaotic motion by choosing its value in the interval 0.481 < f < 1.0. 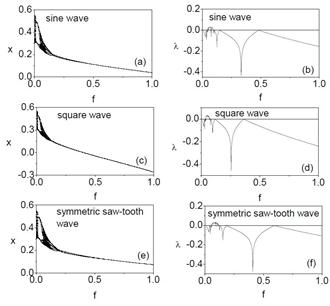 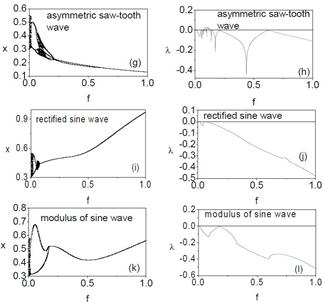 Fig. 3. Bifurcation diagrams and the corresponding maximal Lyapunov diagrams of Brusselator system (Eq.2) driven by various periodic forces. The other parameters values are a = 0.4, b = 1.2 and ω = 0.81. 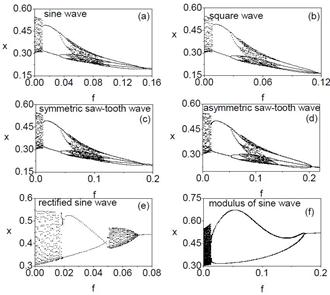 Fig. 4. Magnification of a part of bifurcation diagrams in Fig.3.

The bifurcation structures for sine, square, symmetric and asymmetric saw-tooth waves are similar. The bifurcation patterns for the modulus of sine and rectified sine waves are different from others. To understand the observed difference we studied the phase portrait and the corresponding Poincare map by varying the forcing amplitude of all the forces. In all the forces, for small values of f quasiperiodic orbit occurs. Figures 5 and 6 show the phase portraits and the corresponding Poincare maps at f = 0.01 for all forces. From these figures we can clearly confirm the occurrence of quasiperiodic orbit in Brusselator system (Eq. 2). Figures 7 and 8 show the phase portraits and the corresponding Poincare maps at the chaotic orbit for all forces except rectified and modulus of sine wave forces. In these two forces no chaotic orbit is observed which is clearly seen Figs. 4 (e) and (f). Examples of time evolution of the system (Eq. 2) driven by square-wave force with different f values are shown in Fig. 9. The Brusselator system (Eq. 2) exhibits qualitatively different behavior with periodic oscillations in Figs. 9 (a), 9(b), 9(d) and chaos in Fig. 9 (c). For all the forces, from a certain f values, the long time motion settles to a periodic behaviour. For f = 1.0, the motion of the system is periodic with period-T. Figure 10 shows the phase portraits at f = 1.0 for various periodic forces. Cross-well period-T orbit is found for sine wave, square- wave and symmetric saw-tooth wave forces. Cross-well behavior is not found in asymmetric saw-tooth wave, rectified sine wave and modulus of sine wave forces. The geometrical structures of the attractor is different for different forces. 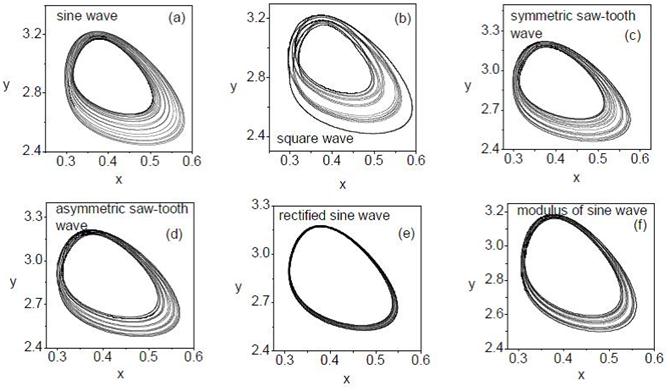 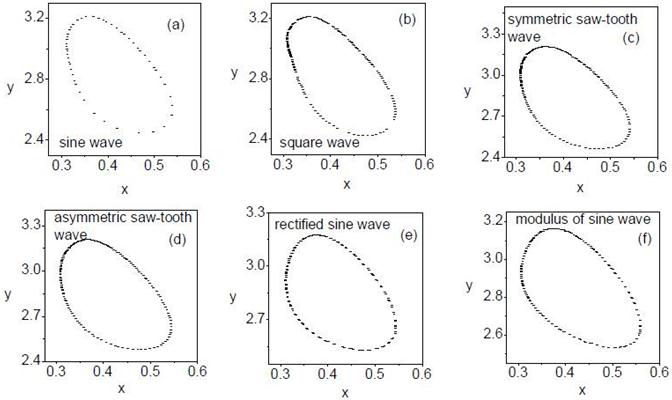 Fig. 6. Poincare maps of perturbed Brusselator system (Eq.2) for different periodic forces at f = 0.01. The corresponding parameters are the same as those in Fig.5. 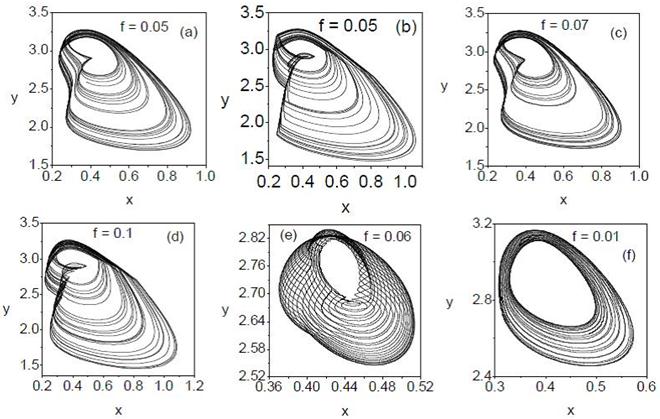 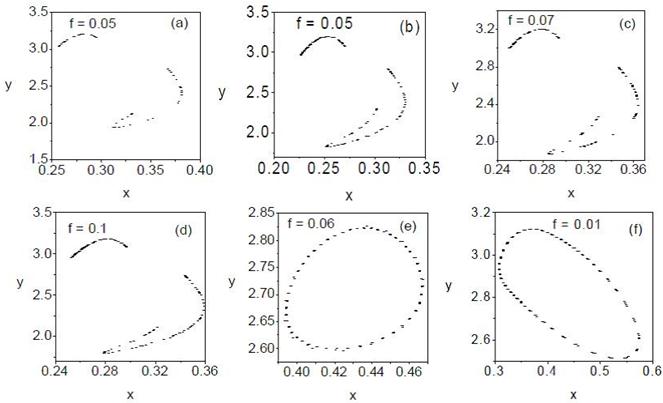 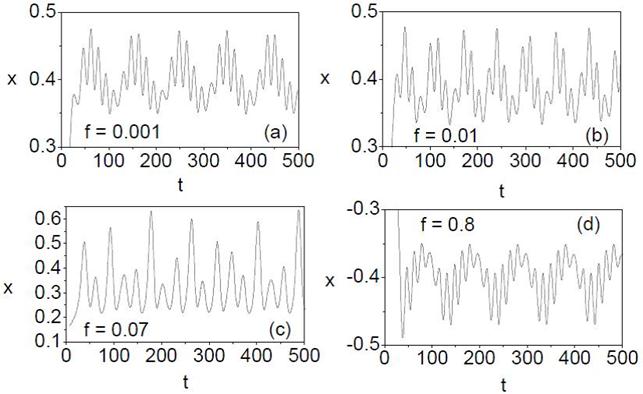 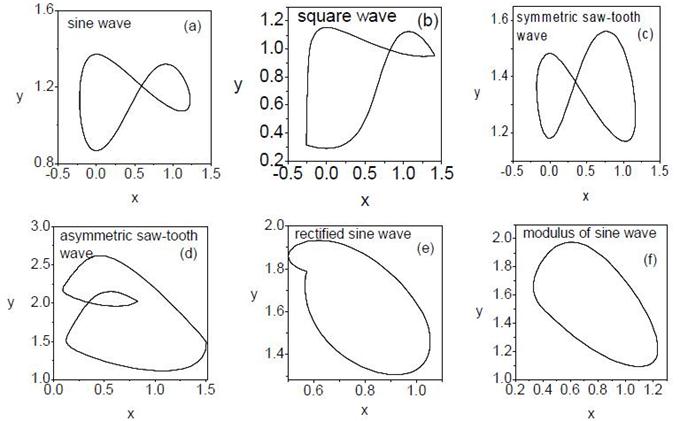 In this paper we numerically studied the effect of various periodic forces in the Brusselator chemical system (Eq.2). In our present work, we fixed the period of the forces as 2π/ω and ω = 0.81. For a particular set of parameters values, we have shown the occurrence of periodic, quasiperiodic and chaotic oscillations and noticed many similarities and differences in the bifurcation structures in the presence of various periodic forces. In addition, suppression and enhancement of chaos has been found for range of amplitude f of the applied periodic forces.