Abstract: A new and useful method for evaluating and predicting the critical pressures (

) of the n-fatty acids, even without the input of the compressibility factor (ΔZb). The deviations of predicted critical pressures from experimental values were between (0-7)%, except for Caproic and Caprylic acids; where the method under predicted the critical pressures with deviations of -6.64% and -11.31% respectively. Experimental Pc values for the triglycerides were not available in the open literature for comparison.

The implementation of many equation of state methods, require critical properties of organic compounds [1]. It is not always possible to find experimental values in the literature and since measurement is expensive and time consuming or sometimes even difficult or impossible, estimation/group contribution methods, which need only the structural information of the molecule are generally of great value [2-4].

A Group Contribution method uses the principle that some simple aspects of the structures of chemical components are always the same in many different molecules. The smallest common constituents are the atoms and the bonds. By using group or atom properties, the physical properties of pure compounds and mixtures can be predicted. [5-8]. Kreglenski and Zwolinski [9], Tsonopoulus [10], Gray et.al. [11], Teja et.al. [12], and Magoulas and Tassios [13], proposed Group Contribution methods that correlated critical properties and normal boiling point to the number of carbon atoms in the molecule for homologous series, such as normal alkanes and alkanols. These correlations have been found to be accurate [5]. However, their range of application was questioned by Kreglenski and Zwolinski [9] and Tsonopoulos and Tan [14].

There are a large number of group contribution methods for the estimation of physical Properties [2], in particular the critical pressure, available in literature. In summary, current methods cannot provide a simple and accurate estimation of the critical pressure across all compounds. Most methods have high average absolute deviations from experimental values available in literature. Hence, the objective of this study was to develop a reliable group contribution estimation method for the prediction of the critical pressures of fatty acids and esters (triglycerides). A data base of this sort is of utmost significance in the analysis and design of plants for separation and purification of vegetable oils.

We did not carry out any experimental measurements ourselves, this work is purely theoretical and computational. However, experimental thermodynamic and critical properties of the fatty acids were obtained from the works of Gokel [15]; Cunico et al [3]; Majer and Svoboda [16]; Ruzicka and Majer [17]; Sales-Cruz et al [18].

3. Development of the New Method

Deviations from the ideal gas law are expressed in terms of the compressibility factor (Z).

In the case of vapourisation or sublimation, we can assume that the change in compressibility factor is unity. Hence;

We can then write equation (3) as;

Equation (5) can be expressed logarithmically as;

If we assume that H does not vary with temperature and pressure; equation (6) may be simplified to give;

Integrating equation (7) will give rise to a two-component, modified Clausius-Clapeyron equation. The enthalpy of vapourisation and the compressibility factor for the fluid is at the boiling point

at the boiling point

If pressure is expressed in units of atmospheres, then         Pb =1atm. Consequently equation (12) can then be written as;

As a first approximation, we take Pb =1. Hence equation (13) becomes;

The Ambrose [19] parameter X is given as;

Equation (17) is the basic Group Contribution approach for predicting Pc for n-alkanes [20]. A plot of (1+X)lnPcversus number of carbon atoms for n-alkanes gave a straight line graph, whose slope accounted for the contributions of the –CH3 and –CH2- groups. In order to obtain the contribution of the –COOH group in n-fatty acids and –CH=CH– group in unsaturated n-fatty acids, a modification of equation (17) was necessary. The modification gave rise to two new equations viz.

(For saturated n-fatty acids) and

A further modification of equations (18) and (19) gave rise to two new equations, accounting for the contributions of the –COO– and

groups in each triglyceride. Equations (20) and (21) were proposed for the prediction of Pc for triglycerides of saturated and unsaturated fatty acids respectively.

groups in each molecule of the unsaturated fatty acid. Nc = number of carbon atoms. Table 1 contains the values of other parameters in equations (18 – 21).

Table 1. Contributions of Groups to the Prediction of Pc.

The critical pressures predicted by equations (18) and (19) and their deviations from experimental values are presented in Table 3. The deviations in Table 3 were calculated according to the relation:

The deviations of predicted critical pressures from experimental values were between (0-7)%, except for Caproic acid and Caprylic acid; where the method under predicted the critical pressures with deviations of -6.64% and -11.31% respectively from experimental Pc values. It is pertinent to note that the predictive capability of our equation improved with increase in chain length of the fatty acids.

Table 4. Predicted Pc of n-Fatty Acids and their Deviations from Experimental Values.

Table 5 shows the Pc values for the triglycerides estimated with equations (20) and (21). As expected, Pc decreased with increase in the number of carbon atoms. However, the Pc predicted for trimyristin exhibited a slight deviation from this trend. This is attributable to the experimental boiling point found for trimyristin in the open literature. Experimental Pc values were not found in the open literature for the triglycerides to serve as a basis for comparison. 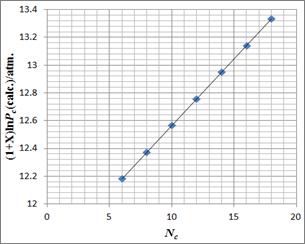 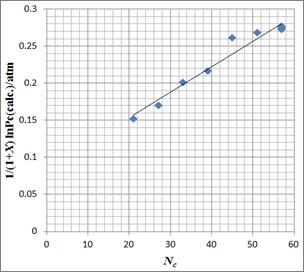