1Department of Chemistry, College of Natural and Mathematical Sciences, the University of Dodom, Dodoma, Tanzania

2Department of Physics, College of Natural and Mathematical Sciences, the University of Dodoma, Dodoma, Tanzania

Methimazole (MMI) (2-mercapto-1-methylimidazole) is known to have several chemotherapeutic applications, particularly in the treatment of thyroid disorders. The reactions and coordination ability of S, N-containing heterocyclic ligands such as MMI have been of considerable interest both from the structural point of view and pharmacological importance [1]. It is also taken before thyroid surgery or radioactive iodine therapy. Grave's disease is the most common cause of hyperthyroidism. It is an autoimmune disease resulting from antibodies that attach to receptors on thyroid hormone producing cells in the thyroid gland and trigger over production of thyroid hormone. An enzyme (peroxidase) produces thyroid hormones, i.e., thyroxine (T4) and triiodothyronine (T3), by combining iodine with a protein called thyroglobulin. MMI prevents iodine and peroxidase from their normal interactions with thyroglobulin to form T4 and T3. This action decreases thyroid hormone production. MMI also interferes with the conversion of T4 to T3. Since T3 is more potent than T4, this also reduces the activity of thyroid hormones (2, 3). But MMI may cause side effects such as nephritis, liver cirosis, skin irritation, allergies and pharyng with fever. Thus, accurate determination of the drug by using simple and fast methods is a requirement in the fields of pharmaceuticals, nutrition, as well as clinical chemistry. MMI exists in thiol and thione tautomeric forms (Figure 1) and consequently acts as ambidentate ligand.

Fig. 1. The tautomeric forms of MMI.

Quantum chemical methods have already proven to be very useful in determining the molecular structure as well as elucidating the electronic structure and reactivity [4]. Thus, it has become a common practice to carry out quantum chemical calculations in corrosion inhibition studies. The concept of assessing the efficiency of a corrosion inhibitor with the help of computational chemistry is to search for compounds with desired properties using chemical intuition and experience into a mathematically quantiﬁed and computerized form. Once a correlation between the structure and activity or property is found, any number of compounds, including those not yet synthesized, can be readily screened employing computational methodology [5] and a set of mathematical equations which are capable of representing accurately the chemical phenomenon under study [6, 7].

The study of corrosion processes and their inhibition by organic inhibitors is a very active ﬁeld of research [8]. Many researchers report that the inhibition effect mainly depends on some physicochemical and electronic properties of the organic inhibitor which relate to its functional groups, steric effects, electronic density of donor atoms, and orbital character of donating electrons, and so on [9,10]. The inhibiting mechanism is generally explained by the formation of a physically and/or chemically adsorbed ﬁlm on the metal surface [11, 12]. It is well known that organic compounds which act as inhibitors are rich in hetero atoms, such as sulfur, nitrogen, and oxygen [13, 14]. These compounds and their derivatives are excellent corrosion inhibitors in a wide range of media and are selected essentially from empirical knowledge based on their macroscopic physico-chemical properties. Recently, theoretical prediction of the efﬁciency of corrosion inhibitors has become very popular in parallel with the progress in computational hardware and the development of efﬁcient algorithms which assisted the routine development of molecular quantum mechanical calculations [15]. Due to the enormous complexity of this type of studies which need to consider the metallic surface, inhibitor and solvent molecules, theoretical calculations of the corrosion inhibition processes cannot be achieved in a rigorous way from the viewpoint of quantum chemistry.

All the geometries of the tautomers have been fully optimized using the B3LYP method within the framework of density functional theory (DFT) in conjunction with the 6-311G (d, p) basis set, i.e., Becke’s three parameter non-local hybrid exchange potential with the non-local correlation functional of Lee, Yang, and Parr [16, 17]. Following the geometry optimizations, analytical frequency calculations were proceeded at the DFT/6-311G (d, p) level, using following standard procedures, to obtain the thermochemical properties. All these calculations were carried out on a Pentium V personal computer by means of GAUSSIAN 09 program package [18]. These calculations have been widely used to study reaction mechanisms [19]. They have also been proved to be a very powerful tool for studying inhibition of the corrosion of metals [20,21]. Recently, density functional theory (DFT) has been used to analyze the characteristics of the inhibitor/surface mechanism and to describe the structural nature of the inhibitor in the corrosion process [22].

The basic relationship of the density functional theory of chemical reactivity is precisely, the one established by Parr, Donnelly, Levy and Palke [23], that links the chemical potential of DFT with the first derivative of the energy with respect to the number of electrons, and therefore with the negative of the electronegativity (χ).

Where μ is the chemical potential, E is the total energy, N is the number of electrons, and ν (r) is the external potential of the system. Hardness (η) has been defined within the DFT as the second derivative of the E with respect to N as (vr) property which measures both the stability and reactivity of the molecule [24].

Where, v (r) and μ are the external and electronic chemical potentials respectively.

The global softness (s) is the inverse of the global hardness [27].

Moreover, for a reaction of two systems with different electronegativities, the electronic flow will occur from the molecule with the lower electronegativity (the organic inhibitor) towards that of higher value (metallic surface), till the chemical potentials are equal [29]. Therefore the fraction of electrons transferred (∆N) from the inhibitor molecule to the metallic atom was calculated according to Pearson electronegativity scale [29]:

Where χFe and χinh denote the absolute electronegativity of Fe and the inhibitor molecule, respectively; ɳFe and ɳinh denote the absolute hardness of Fe and the inhibitor molecule, respectively. A theoretical value for the electronegativity of bulk iron was used χFe=7 eV and a global hardness of ɳFe=0, by assuming that for a metallic bulk IP=EA because they are softer than the neutral metallic atoms [30].

According to the simple charge transfer model for donation and back-donation of charges proposed recently by Gomez et al., [31] an electronic back-donation process might be occurring governing the interaction between the inhibitor molecule and the metal surface. The concept establishes that if both processes occur, namely charge transfer to the molecule and backdonation from the molecule, the energy change is directly related to the hardness of the molecule, as indicated in the following expression.

The ΔEBack-donation implies that when η>0 and ΔEBack-donation<0 the charge transfer to a molecule, followed by a back-donation from the molecule, is energetically favored. In this context, hence, it is possible to compare the stabilization among inhibiting molecules, since there will be an interaction with the same metal, then, it is expected that it will decrease as the hardness increases.

The geometries for thione and thiol forms of MMI molecule were fully optimized at DFT level of theory using a B3LYP functional together with 6-311G (d, p) basis set in gaseous phase and the absence of imaginary frequencies in the vibrational spectrum proves that the equilibrium structures correspond to the minima energy for each tautomer. The final optimized geometries are given in Figure 2 and Table 1 represents the bond lengths and their angle measurement. 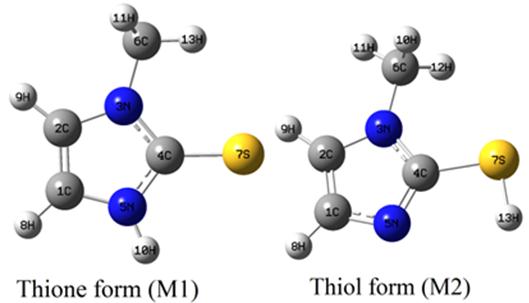 The energy of the highest occupied molecular orbital (EHOMO) measures the tendency towards the donation of electron by a molecule. Therefore, higher values of EHOMO indicate better tendency towards the donation of electron, enhancing the adsorption of the inhibitor on mild steel and therefore better inhibition efficiency. ELUMO indicates the ability of the molecule to accept electrons. The binding ability of the inhibitor to the metal surface increases with increasing of the HOMO and decreasing of the LUMO energy values. Frontier molecular orbital diagrams of M1 and M2 is represented in fig. 3. 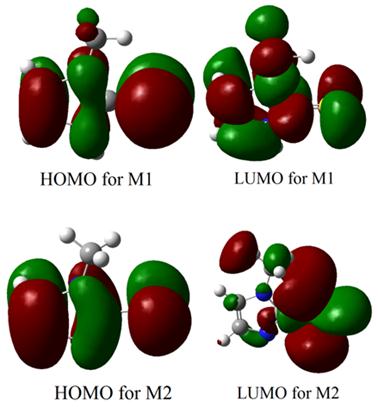 The energy of the HOMO (EHOMO) provides information about the electron donating ability of the molecule. The molecule with the highest EHOMO value often has the highest tendency to donate electrons to appropriate acceptor molecule of low empty molecular orbital energy [33]. The inhibitor does not only donate electron to the unoccupied d orbital of the metal ion but can also accept electron from the d-orbital of the metal leading to the formation of a feedback bond. The highest value of EHOMO is -5.30241 (eV) of M1, indicates the better inhibition efficiency than the other inhibitor M2.

The energy gap between the HOMO and the LUMO (ΔE) provides information about the overall reactivity of a molecule. As ΔE decreases, the reactivity of the molecule increases leading to increase in the inhibition efficiency of the molecule [34]. Low values of the (ΔE=ELUMO – EHOMO) gap will render good inhibition efficiencies since the energy to remove an electron from the last occupied orbital will be minimized [35]. A molecule with a low energy gap is more polarizable and is generally associated with the high chemical activity and low kinetic stability and is termed soft molecule [36]. In our study, the trend for the (ΔEg gap) values follows the order M1>M2, which suggests that inhibitor M1 has the highest reactivity in comparison to the other compound M2 and would therefore likely interact strongly with the metal surface.

Absolute hardness and softness are important properties to measure the molecular stability and reactivity. It is apparent that the chemical hardness fundamentally signifies the resistance towards the deformation or polarization of the electron cloud of the atoms, ions or molecules under small perturbation of chemical reaction. A hard molecule has a large energy gap and a soft molecule has a small energy gap [38]. In our present study M1 with low hardness value 2.69692 (eV) compared with other compound have a low energy gap. Normally, the inhibitor with the least value of global hardness (hence the highest value of global softness) is expected to have the highest inhibition efficiency [39]. For the simplest transfer of electron, adsorption could occur at the part of the molecule where softness (S), which is a local property, has a highest value [40]. M1 with the softness value of 0.7079 has the highest inhibition efficiency.

Quantum chemical calculations, using the Density Functional Theory method, have been performed on two pyrazole derivatives, namely 1-methyl-1H-imidazole-2 (3H)-thione (MMI1) and 1-methyl-1H-imidazole-2-thiol (MMI2) to investigate their geometric and electronic properties in an attempt to elucidate the reactivity. The inhibition efficiency of P1 and P2 increases with the increase in EHOMO, and decreases in energy gap (ΔE). M1 has the highest inhibition efficiency because it had the highest HOMO energy and ΔN values and it was most capable of offering electrons. The parameters like hardness (η), Softness (S), dipole moment (μ), electron affinity (EA) ionization potential (IE), electronegativity (χ) and the fraction of electron transferred (ΔN) confirms the inhibition efficiency in the order of M1>M2.