The Causal Relationship Between Unemployment Rate and Underground Economy in Iran

2. An Review on the Underground Economy and Its Relationship to Unemployment

2.1. An Overview on the Underground Economy

In the literature, underground economy is also called parallel, unofficial, shadow, black and irregular economy. There is also no agreement on the definition of the underground economy and on its measurement approaches as it has many different names. Therefore, there are many definitions for the underground economy and its measurement approaches. One of the One commonly used definition is: all currently unregistered economic activitie swhich contribute to the officially calculated Gross National Product1. Smith (1994) defines it as, market based production of goods and services, whether legal or illegal, that escapes detection in the official estimates of gross domestic product. used diffrent ways to estimate underground economy that They can be classified into two general categories, including: direct approach and indirect approach direct approach, These approaches are also called micro approaches since they use well-designed surveys and samples based on voluntary replies or tax auditing.

2.2. Overview of the Relationship Between the Underground Economy and Unemployment Rate

ɳ is the scalar latent variable(the size of underground economy)

y is a vector of indicators of the latent variable,

X =(X1,...Xq ) is the vector of causes of underground economy

Substituting equation 1 and 2 yields a reduced form solution which expresses a relationship betweenthe observed variables xt and yt This is shown in equation 3:

This system of equations is faced with the problem of identifying To avoid this problem an elements of λ bound to the Pre-determined amount2.

In this section we discuss the data used for the estimation. The data series are Annual from 1973 to 2012. The series in levels or differences have been tested for unit root. This is shown in Appendix (1). We use the Augmented-Dicky Fuller (ADF) test and Phillips-Perron (PP) test.

In this part we discuss how the model is estimated using the MIMIC model.frist, we estimate several specifications of the models. We test for identification and then proceed to discuss the sign and significance of the estimated coefficients as well as the Goodness of Fit of our model. In estimating the size of underground economy, the latant variable is modelled as a linear function of a set of exogenous variable that shown in equation (4):

Table 1. Estimates of the size of iran undergroundeconomy (1987).

The index is scaled to take up to a value of 13 % in 1987 and Obtained size of underground economy for other years Through The following operations:

ht: is amount of underground cconomy as a percentage of official GDP.

ht*:is the index of underground economy calculated by (4) as a percentage of official GDP.

h1987: 13 % is the exogenous estimate of underground economy;

In Figure 1, the rezult of MIMIC 7-1-3 are shown for the period 1973 to 2012 The underground economy measured as percentage of official GDP

4. Is There a Structural Link between the Underground Economy and Unemployment Rate

After we estimate the size of the underground economy, we investigate the nature of the causality relationship between the two variables using Toda-Yamamoto approach.

Toda and Yamamoto (1995) causality test is applied in level VARs irrespective of whether the variables are integrated, cointegrated, or not. Toda and Yamamoto argue that F-statistic used to test for traditional Granger causality may not be valid as the test does not have a standard distribution when the time series data integrated or cointegrated .The Toda-Yamamoto procedure basically involves estimation of an augmented VAR (k +dmax) model, where k is the optimal lag length in the original VAR system and dmax is maximal order of integration of the variables in the VAR system. This test done in tow stage. The first stage determines the optimal lag length (k) and the maximum order of integration (d) of the variables in the system. 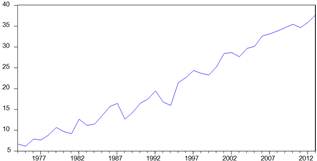 The lag length, k is generated in the process of the VAR in levels among the variables in the system by using different lag length criterion such as AIC or SBC . the order of integration, d Identified by used of the unite root test such as ADF and Phillips-Perron tests . The second stage uses the modified Wald procedure to test the VAR (k) model for causality. The optimal lag length is equal to p= [k+d(max)]. In the case of a bivariate (Y, X) relationship ,Toda and Yamamoto causality test is demonstrated as follows:

are the residuals of the models.

The null hypothesis that X does not cause Y is constructed as follows; H0 =C1i=0,

i =1,……, k . the alternaitive null hypothesis that Y does not cause X is formulated as follows:

We employed the Augmented Dickey-Fuller (ADF) and Phillips-Peron (PP) tests to examine the integrating order of the variables under consideration. The results of the unit root tests for the variables in their levels and first differences are reported in Table 2.

Our results revealed that both the variables are I(1) . Therefore, the maximum order of integration in the VAR system, dmax=1. Given that both series were found to be integrated of order one, we specify the bivariate VAR model by determining the optimal lag length of level variables in the model. Table 3 reports the optimal lag length . The optimum lag length (k) chosen by AIC, SC, HQ the Toda-Yamamoto causality test results shown in Table III,

* indicates rejection of the null at the 1% level

In this appendix we display the tests employed to detect the order of integration in the time series. The pioneer in tackling the problem of non-stationarity in the MIMIC models has been Giles (1995).

Table 1. Estimated Coefficients of the MIMIC Models and descriptive statistics.

Notes: t-statistic are given in parentheses. * Means |t-statistic|>1.96. All variables are used as their standardized deviations from the mean. According to the MIMIC models identification rule, one indicator has to be fixed to an a priori value.

1. For details about the effects of normalization on structural coefficients, see Dell’Anno,

1. For a fuller treatment of this subject, we refer the reader to Dell’Anno and Schneider (2006).