Seasonal Changes in Soluble Proteins of Some Native Desert Species

Abstract: This research was carried out on eight wild species inhabiting two oases in the Western Egyptian Desert. Plants in both regions were categorized into: a- Halophytes, namely: Salsola imbricata, Cressa cretica, and Suaeda monoica, b- Xerophytes include: Alhagi graecorum, Hyoscyamus muticus, Prosopis farcta, and Gossypium arboretum and c- Succulent Zygophyllum coccineum. The plant samples were collected at different sites during winter and summer seasons. Laboratory analyses on plants included total and specific soluble proteins. The resultsobtained indicated that: locations or its interaction with seasonality dominantly affect soluble proteins.Gel electrophoresis showed that the low molecular weight proteins had the high percentage. Halophytic species especially C. cretica, and S.imbricata had a relatively high molecular weight protein in summer while xerophytic species such as P. farcta and a succulent Z. coccineum had a relatively high molecular weight protein during winter.

Drought, heat and salinity stresses are often combined in nature. Need to learn about plant responses to extremes in temperature, soil aridity, and salinity in various elements of desert vegetation can be a basis to judge for success or failure of any prospective crop plants to be introduced to such habitats in amelioration projects hoped for. In addition, the scientific information expected from such investigation are highly valuable concerning mechanisms of physiological adjustments available to the variety of species composing the natural vegetation in such habitats. When plants experience environmental stresses, such as drought, salinity and temperature, they activate various metabolic and defense systems to survive [1].

The adaptability of plant species to high salt concentrations in the soil by lowering tissue osmotic water potential was accompanied by accumulation of such osmotic solutes as soluble carbohydrates, proteins and free amino acids [2]. Salinity promotes synthesis of Salt Shock Protein (SSP), causes either increase or decrease in the level of total and soluble protein, depending on the plant parts studied and leads to increased activity of many enzymes [3]. However, proteins produced under salt stress are not always associated with salt tolerance; consequently, using proteins as a salt tolerance indicator depends on the nature of the plant species or cultivar [4]. These observations suggest the possible involvement of these polypeptides for osmotic adjustment under salt stress [5]. Also, Gomathi and Vasantha [6] concluded that changes in RNA and DNA content under salinity stress might be responsible for specific expression of Salt Shock Proteins with MW of 15, 28 and 72 kDa in tolerant genotypes, while there were completely absent in susceptible.

The study hitherto presented is an attempt to recognize some identifiable means of adjustment in desert vegetation of inland desert oases. Therefore, it is of great significance to investigate the molecular mechanism of salinity, drought and heat tolerance in plants and improve stress tolerance of introduced crops. Accordingly, the aim of the work presented here was to investigate the changes of water soluble proteins (specific and total ) in some desert species. The species investigated include basically those of different ecological affiliations as well as different life forms, in order to have comparative indications in the means of adjustment. 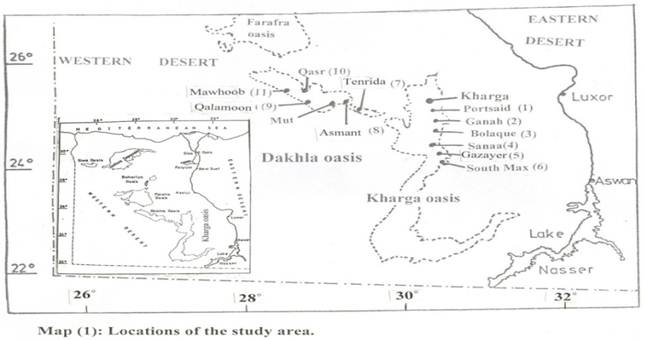 Figure 1. Location of the study area.

Samples of 8 native species were collected from their natural habitats in the sites studied, when encountered. Plants were sampled twice: - 1- In January (representing mild winter conditions) and, 2- In September (representing the close up of harsh summer climate) in order to cover the seasonal changes in tested parameters in response to changes in climatic conditions. The studied species were identified according to Täckholm[7] and Boulos [8]. The investigated species including: Alhagi graecorum Boiss, (Family: Fabaceae), Prosopis farcta (Bank & Sol.) Macbr (F.: Mimosaceae), Suaeda monoica Forssk., Salsola imbricate Forssk., (F.: Chenopodiaceae), Cressa cretica L. (F.: Convolvulaceae), Gossypium arboreum L. (F.: Malaceae), Zygophyllum coccineum L. (F.: Zygophyllaceae) and Hyoscyamus muticus L. (F.: Solanaceae). The samples collected were branches bearing leaves, were immediately transferred to tightly close plastic containers, and transferred from their natural habitats to the laboratory. Samples of leaves were washed with distilled water and thoroughly dried on filter paper. For each species, four samples were chosen at random, then oven-dried at 70°C for 24 hrs.

2.2. Preparation of Plant Extracts for Analysis

One gram of finely powdered oven dried material of each plant sample was transferred to a clean test tube. Ten ml of bi-distilled water was added and heated to 80°C in a water bath for an hour, stirred at intervals and then filtration was done by using filter paper according to El-Sharkawi and Michel [9]. Plant extracts were kept in vials in deep freeze for chemical analyses.

Soluble proteins were determined according to Lowry et al., [10]. Protein analysis by acrylamide gel electrophoresis (SDS-PAGE) was carried out according to Laemmli [11] in the first dimension, and the Lablmage program was used in determination of the molecular weight and percentage of water soluble proteins.

The effects of single factors (season or location) and their interaction (season x location) on the contents of metabolites in different species were evaluated statistically by the analysis of variance (F test). The relative role of each single factor and their interaction in the total response were determined by using the coefficient of determination (η2) to indicate the degree of control of the factor on the parameter tested [12]; [13] as applied by EL-Sharkawi and Springuel [14].

Soluble protein concentrations (mg/ml sap) exhibited marked differences in each species due to location and season (Figure, 2). Halophytes had higher soluble proteins than xerophytes and succulent species. Soluble proteins were higher in winter than in summer with some exceptions.

Data in table, 1 show a generally significant role of seasons, locations, and their interactions on soluble proteins concentration with some exceptions. Locations had a dominant effect on S.P. concentration of halophytic species, as well as in case of G. arboreum and P. farcta. Whereas, the (Se x Lo) interaction had a dominant role in case of Zygophyllum, Hyoscyamus, and Alhagi

Table 1. ANOVA test showed the effects of seasons, locations and their interaction on soluble proteins of investigated species at Kharga and Dakhla regions. 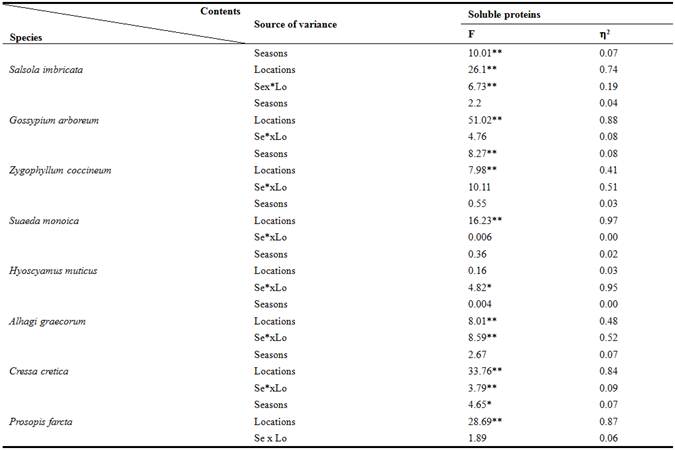 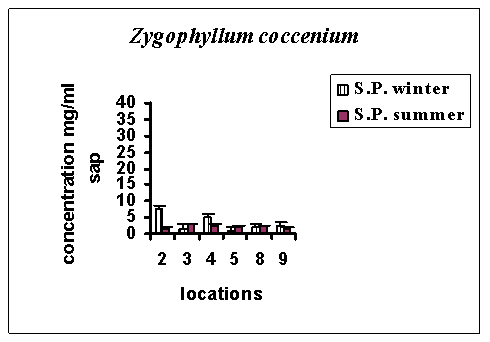 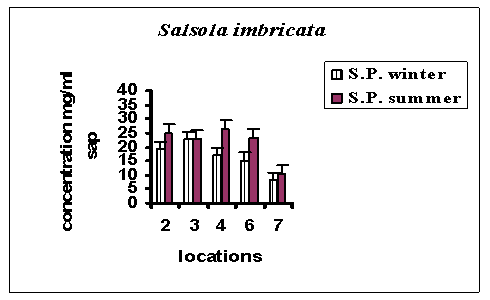 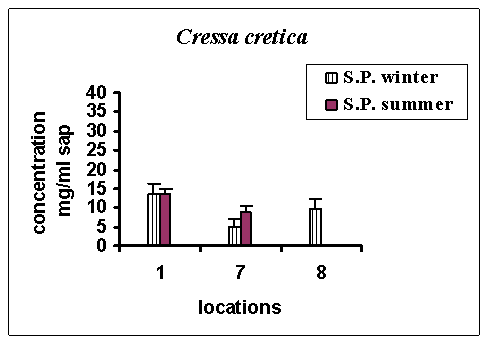 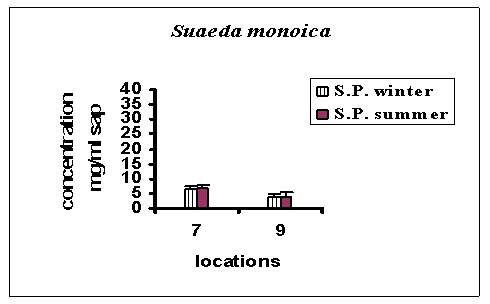 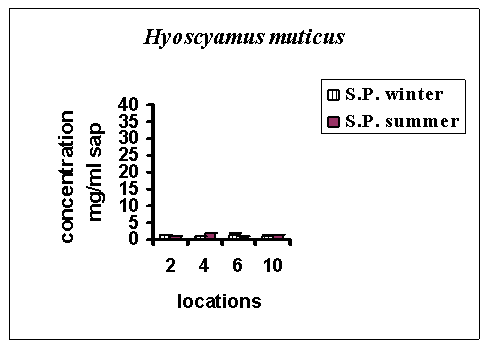 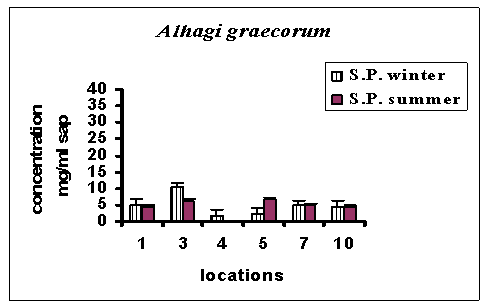 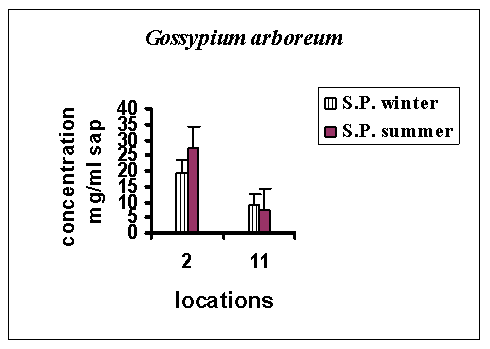 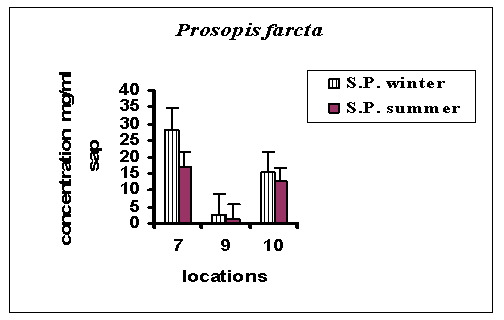 The SDS-PAGE of water soluble proteins fractions revealed outstanding differences in the banding profile patterns, represented by their presence or absence and intensity, in species chosen from specific representative habitats as shown in figures (3-6) of gel electrophoresis.

In G. arboreum, 3 protein bands were detected during winter and having molecular weights in the range 25-93 KD and low M. wt. 43 KD has a percentage of 85.1%.

The response of plants to salt and other environmental stresses have been extensively investigated by proteomic approach for many decades, still we have not been able to understand fully the mechanism which imparts tolerance to some plants and sensitivity to others due to the complexity of the mechanism [15]. Suaeda (as halophytic species) form low and moderate molecular weight proteins and thus may play a role in water binding. In some cases, during summer, protein bands disappeared which may be due to the conversion of soluble proteins to free amino acids or it is degraded [16]; [17]; [18]. In Cressa, two new protein markers for drought tolerance were induced under high temperature (hot summer season). These results agree with finding by Abdel-Hady and El-Nagar [19] in wheat. Although Pareek et al., [4] suggested 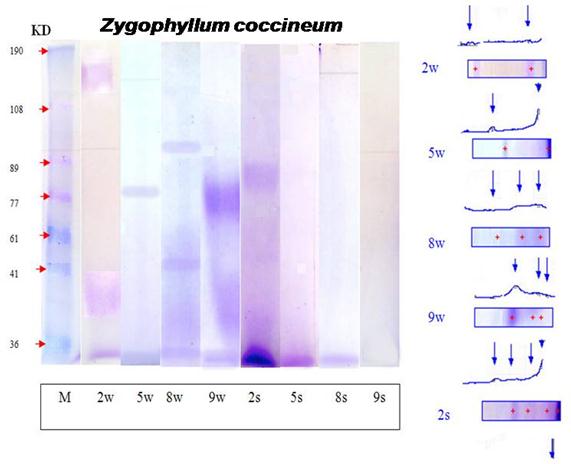 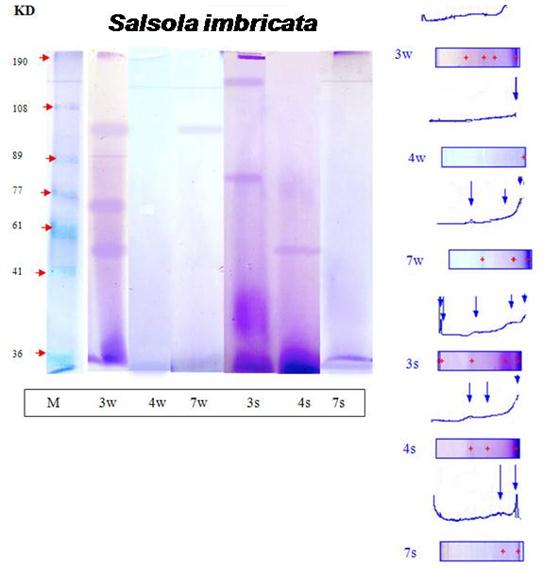 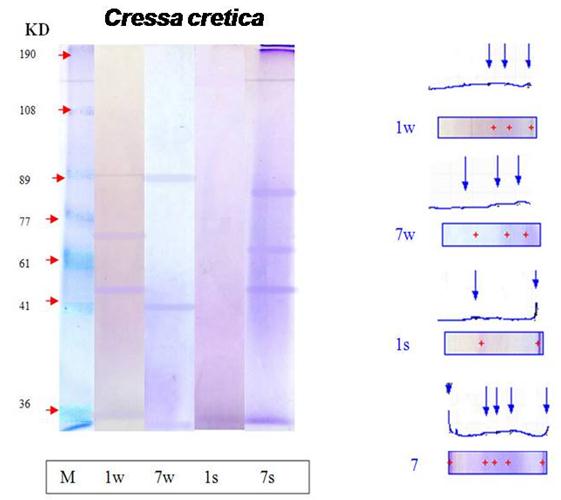 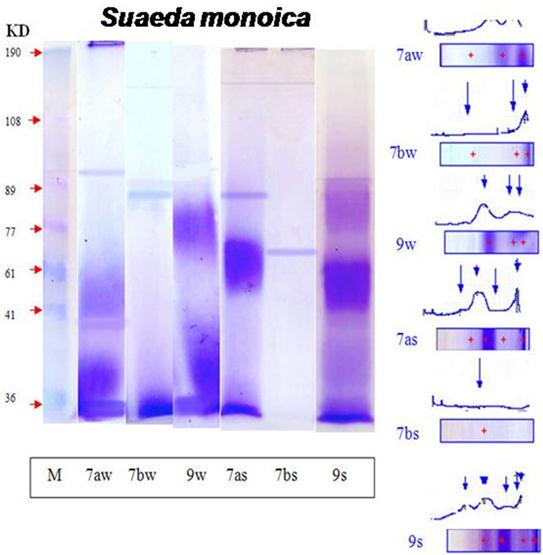 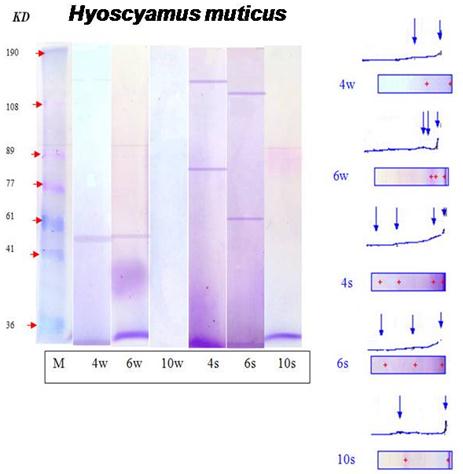 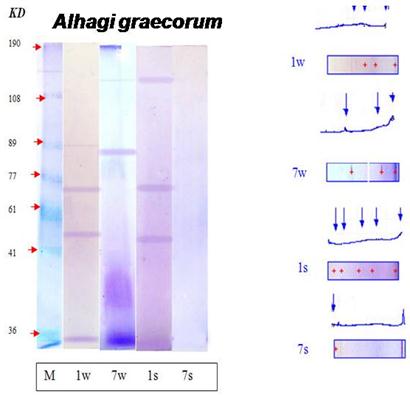 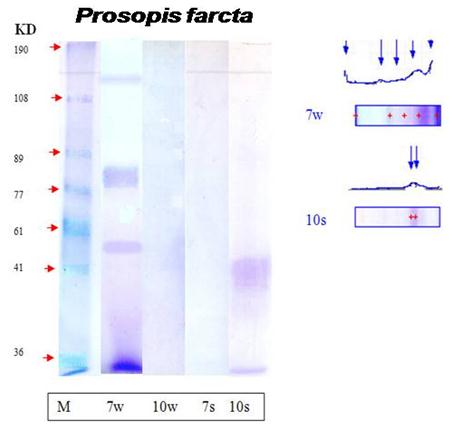 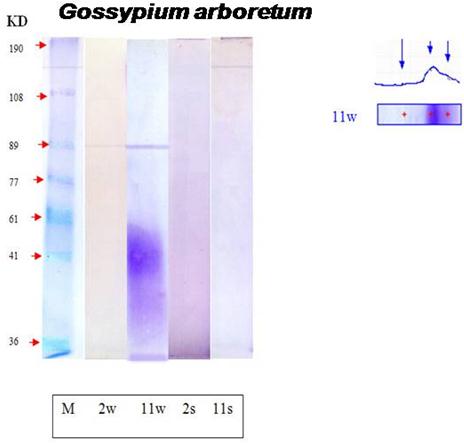 Table 2. Gel electrophoresis showing molecular weight of proteins in different species at different locations and their percentage during the two seasons. 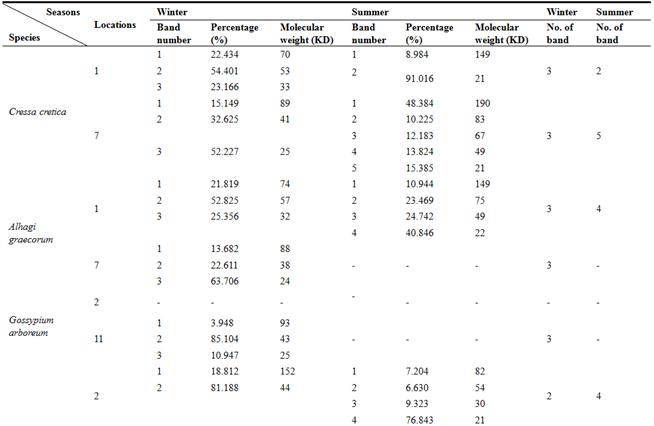 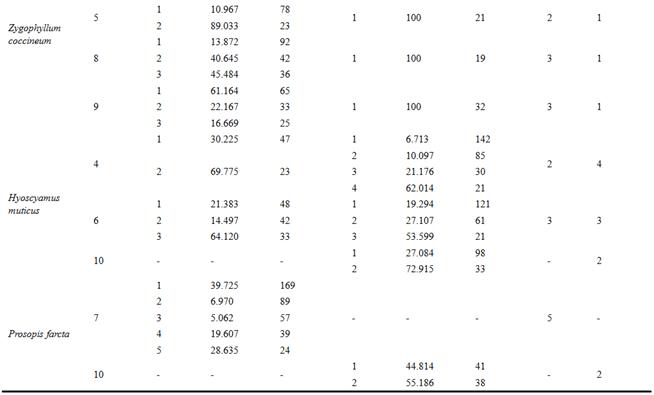 Table 2. Continue: Gel electrophoresis showing molecular weight of proteins in different species at different locations and their percentage during the two seasons. 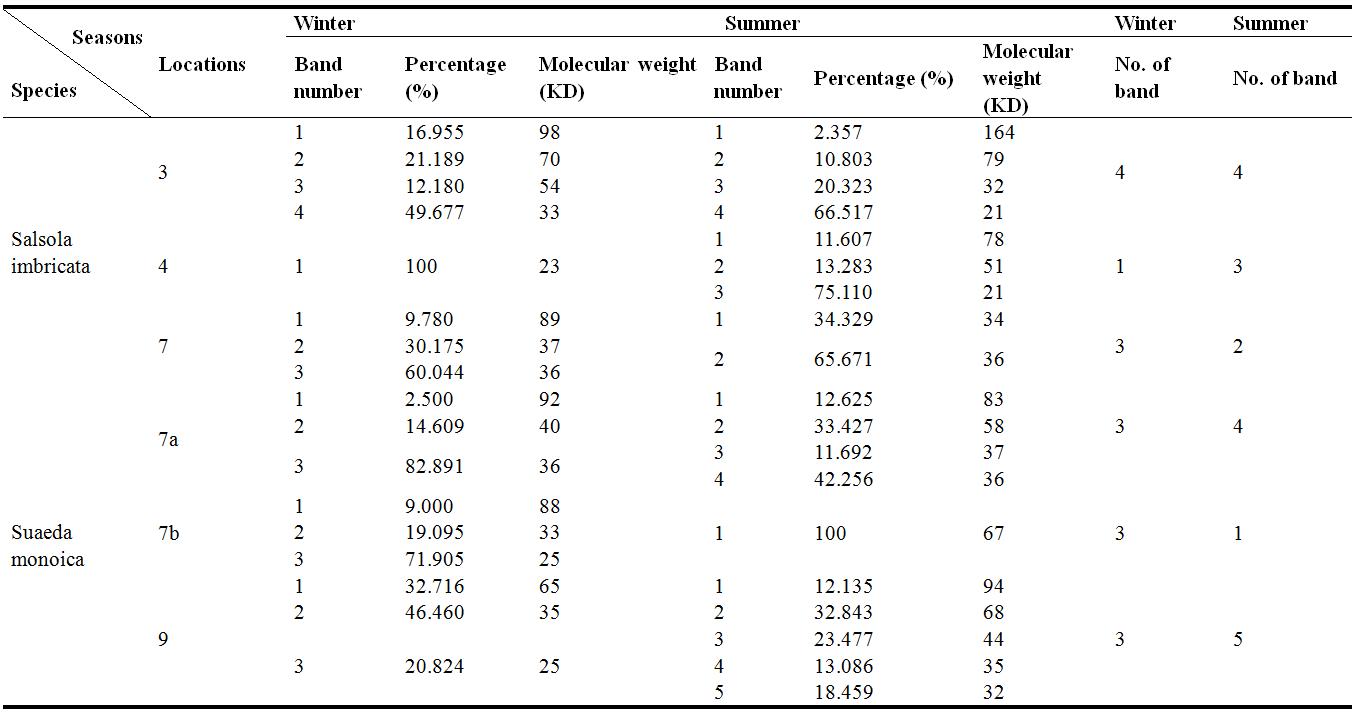 that, stress proteins could be used as important molecular markers for improvement of salt tolerance using genetic engineering techniques; in many studies the proteins produced under salt stress are not always associated with salt tolerance.

Thus using proteins as salt tolerance indicators depends on the nature of the plant species or cultivar [20]. Also, thermo-tolerance against heat stress has been accomplished in plants transferred with heat shock regulatory proteins [21]. Moreover, the adaptation of these plants to heat stress induced accumulation of water binding molecules and compatible solutes which related to enhance thermostability [22]. Commonly, the significant effect of season, location, and their interaction on soluble proteins concentration was detected in most investigated species with some exceptions. Accordingly, a larger content of soluble proteins (S.P.), resulting in binding water molecules is found in S. imbricate and G. arboreum particularly in summer. Meanwhile, P.farcta accumulate S.P. in winter. This accumulation is beneficial in maintaining the viscous properties and contributes to increasing osmolality of the cytoplasm [23], [24].