Abstract: Low Nutritional status of Bengali Primary School Children was concluded by different authors for last two decades, but most of the study conducted in a specified part of the Bengal, India and conclusions were drawn accordingly. This study was carried out among 3654 primary school children, being aged 8-9 years from 183 schools of all districts of West Bengal State. Body height and Body weight measurements were recorded following standard techniques. The body mass index (BMI) was calculated following standard formula: BMI=Kg/M2 =Weight (Kg)/Height(M2). Three commonly used under nutrition indicator i.e stunting, under weight and thinness were used to evaluate the nutritional status of the subjects. The study results, 26.1% boys and 22.9% girls were stunted, boys 39.7% and girls 36.5% were under weight and in thinness percentage of boys was 65.4% where as in girls it was 65.3%.

Over 1/5thof our population compiles the children of age 5-12 years, i.e, Primary Education(1). As today’s children are the citizen of tomorrow’s world, their survival, protection and development are prerequisite for the future development of humanity (2). Nutrition has major effect on health. Nutrition refers to the availability of energy and nutrients to the body’s cell in relation to body requirement. Malnutrition refers to any imbalance in satisfying nutrition requirements (3). In India national level data on child malnutrition have, however, been scarce. Recognizing their gap, India’s 1992-93 National Family health Survey (NFHS) collected anthropometric data on height and weight of children and data shows that 53% of children in rural areas are underweight, and this varies across the states. The percentage of underweight children in the country was 53.4 in 1992 it decreased to 45.8 in 1998 and rose again in 2006. The report estimates level of children malnutrition and effect of selected demographic and socioeconomic factor.

A child entire life is determined in large measures by the food ginning to him/her in the first five year. Malnutrition among children is an important health problem in India including West Bengal. Anthropometric measurement is an almost mandatory tool in any research to assess health and nutritional condition in childhood. Physical measurement like body weight, height , circumference of arm and calf , triceps, skin fold etc. are extensively used to determine the nutritional status of children. Based on age , height, and weight , a number of indices such as height for age(stunting), weight for age (underweight) and BMI for age (Thinness) have been suggested . Stunting is defined as a low height-for-age for children, and measures the past (chronic) child under-nutrition. Children with Z scores< -2.00 are said to be stunted and those < -3.00 severely stunted. Underweight is defined as low weight- for-age and it reflects past (chronic) and present (acute) undernutrition . Children with Z scores< -2.00 are said to be underweight. Thinness is BMI for age. Thinness refers to a human who is considered to be under a normal BMI for age and it is graded as III, II,I (severe, moderate and mild respectively) defined to pass through BMI value of 16.0,17.0, and 18.5 Kg/M2 respectively.

There is little information on health and nutritional status of West Bengal Primary School Children. Most of the study focus in a particular district in this state but this state compiles hill, terai, dooars and oceanic region. So, it is quite difficult to make any general conclusion regarding the health and nutritional status of the children. This, perhaps, holds good especially for the state like West Bengal which is a border state and densely-populated state. There for the major objectives of the study is to study the West Bengal primary school children’s health status, specially stunting, (height for age), underweight (weight for age) and thinness (BMI for age) variables.

This was a cross-sectional survey study. The researcher selected her own state West Bengal, India, for this study West Bengal(WB) is situated in the eastern region of India and is the nation's fourth most populous state. It is also the seventh most populous sub-national entity in the world. West Bengal, together with Bangladesh lying on its east, forms the historical and geographical region of Bengal. To its northeast lie the states of Assam and Sikkim and the country of Bhutan, and to its southwest lies the state of Orissa. To the west, it borders the states of Jharkhand and Bihar, and to the northwest, Nepal. The total area of the state is 88,752 sq km. According to the census of 2001, the state has a population of 8,02,21,171. West Bengal’s climate composes of four main seasons viz. summer, monsoon, a short autumn, and winter. The delta region experiences more humidity in the atmosphere during summer season; the western highlands experience a dry summer, with day temperature ranging from 38 °C to 45 °C. The nights are comparatively cool carrying moisture from the Bay of Bengal. The winter session starts from October and continues till February. The climate of the northern region during winter months is pleasant but there is heavy snowfall in the Himalayan regions. In this state, east, west north, south and middle part are different in each and every nature, so that the researcher selected all 19 districts in West Bengal state of India.

From each district, 10 schools were selected by the method of cluster random sampling. So, from total 19 districts 190 school (19 x 10) were selected. It should be mentioned here that due to political/ local disturbances 7 schools (3 schools at Darjeeling and 4 schools in South 24 Parganas) could not be attended. So, a total 183 schools were studied.

Before collection of data, the researcher made an appeal to the West Bengal Primary Education Council (WBPEC), Bidhannagar, Kolkata, for an approval to collect data. It is worthy mentioning here that this project was approved by the National Council of Education Research and Training (NCERT), Govt. of India and the research scholar enjoyed a prestigious doctoral fellowship. All these two approval generating a high impact for the collection of data. Approval latter from NCERT and WBPEC presented below.

Height, Weight measurements were taken by the researcher following the standard techniques. Weight and height were recorded with the subject wearing the school uniform (single cloth) to the nearest 0.5 kg and 0.1 cm respectively. The body mass index(BMI) was calculated following standard formula:

Three commonly used under nutrition indicators, i.e, stunting, under nutrition and thinness were used to evaluate the nutritional of the subjects. The United States National Centre for Health Statistics (NCHS) 17,18 age and sex specific -2 Z scores were followed to define underweight, stunting and thinness. The following scheme was utilized;

Where WAZ,HAZ and BMIZ to height-for age, weight – for – age and BMI – for – age , age and sex specific Z scores , respectively, of NCHS19.

Stunting is height for age. Stunting is a good objective health status measurer. It expresses the status of chronic malnutrition. In West Bengal, Primary School Student (III & IV standard) 24.5% facing chronic malnutrition (Stunting). When were compared these results with boys and girls, it was found that, boys were 26.1% and girls were 22.9% in chronic malnourished condition. It should be mentioned here that 72.1% boys and 76.6% girls were in the normal category. The percentage value of stunting is presented separately for boys and girls in the plate no-1 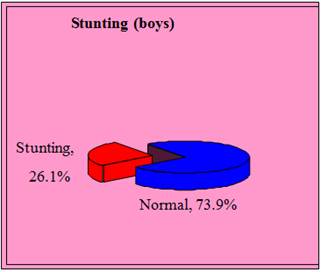 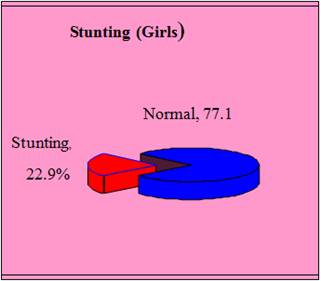 Plate No-1. Stunting for Boys and girls

Under weight is weight for age and an indicator of acute malnutrition. Under weight also is an objective health status measurer. In the present study, it was found overall state of acute malnutrition in the primary school boys and girls was 38.1%. When it is considered respectively in the boys and girls category it was observed that in boys 39.7% and in girls 36.5% under weight . It is better to mention that in West Bengal 60.1% boys and 63.4% girls were under normal weight for age category. The under weight data reported for better understanding in the plate No-2 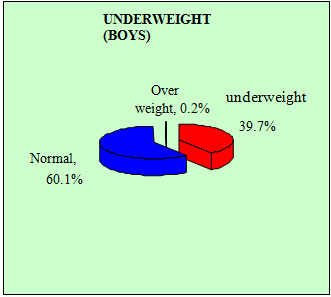 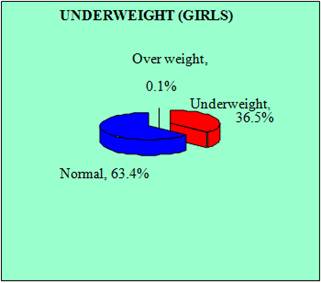 Plate No-2. Underweight for boys and girls

Thinness is BMI for age. The term thinness refers to a human who is considered to be under a normal BMI for age. Recently it was developed by Cole et al. (2007). The overall thinness score of primary school student in West Bengal was 65.3% in the year of 2008-09. In thinness boys and girls trends were very similar. The thinness percentage in boys was 65.4% where as in girls it was 65.3%. The pictorial percentage is given below in the plate No-3. 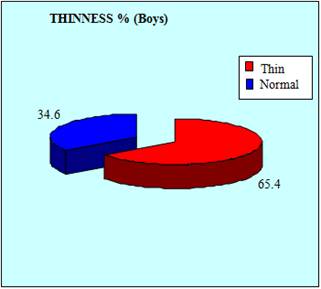 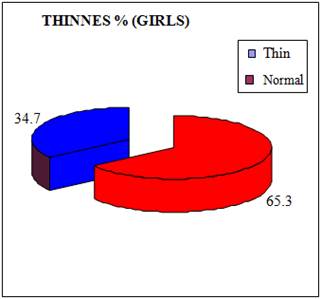 Plate No-3. Thinness for Boys and girls

Improved child health and survival are considered as universal humanitarian goals. Malnutrition to be a problem of considerable magnitude in most developing countries of the world. Several studies have shown that dietary and environmental constraints are the major determinants of differences in the growth performance between children of developing and developed countries (Some et al. 2006; Rajaram et al.2003; Chatterjee 2007; Graitcer et al 1981. In the present study stunting, underweight and thinness were calculated for evaluating children nutritional status. Patil and Wasnic (2009) reported school children in Ratnagiri district of Maharastra state, India. They observed that in the age of 8 years underweight, stunting and thinness were 13.0%, 11.2% and 10.6% and in the age of 9 years it was 10.8%, 6.0% and 9.1% respectively. Bose et al (2008) reported nutritional status of rural school children in Bankura district, West Bengal, India. They observed in the age of 8 years children were facing underweight 10.7%, stunting 7.1% and thinness 21.4%. In the age of 9 years they found underweight 10.9%, stunting9.1% and thinness12.7%.This study provided evidence that these children were acute and chronic nutritional stress indicating the requirement of immediate appropriate public health nutritional intervention programmes. This has important implications for public health policy-maker, planners and organizations seeking to meet national and international developmental targets. However, it must be noted here that the conclusion drown may not be applicable for all district of India, but to a certain extent it may be true for West Bengal state. Medhi et al (2006) observed growth and nutritional status of 6-14 years children of tea garden worker of Assam. They reported in the age of 8 years overall stunting, underweight were 46.6% and 51.1% respectively and in the age of 9 years stunting and thinness were 46.5% and 55.5% respectively. Stunting (Height for age) reflects a failure to reach the linier growth potential due to sub-optimal health and /or nutritional conditions. Underweight reveals a low body mass relative to chronological age, which is influence by both a child’s height and weight.

In the present study, the researcher observed that in the average age of 8.5 years (8-9yrars) the stunting 24.5%, underweight 38.1% and thinness was 65.3%. From this data, it may be revealed that in the Indian context particularly in West Bengal, the primary school children were facing a serious malnutrition problem. For developing a nation and particularly to develop as a sporting nation, getting the best result in each and every games and sports in the world arena, it must overcome this primary level malnutrition problem.