Abstract: In this paper, we examine the problem of establishing minimum cost production and transportation plans that satisfy known demands over a finite planning horizon. Two products, product 1 and 2, can be produced in each of two regions. Each region uses its own facility to supply the demands for two products. Demands for product 2 in one region can be satisfied either by its own production or by transportation from other region, while no transportation between two regions is allowed for product 1. Moreover, the transportation in each period is constrained by a time-dependent capacity bound. Production and transportation costs are assumed to be non-decreasing and concave. Using a network flow approach, properties of extreme points are identified. Then, a dynamic programming algorithm is developed to find an optimal plan.

In this paper, we consider a production and transportation planning problem for which two production regions are involved with capacity bounds on transportation between them. In each region, a single facility manufactures two items, product 1 and 2, each taking a fixed part of the whole production amount to satisfy its own demands over the discrete

. In the problem, we assume that the transportation is allowed only for product 2 from one region to another.

Such a model that multi-products are produced by a facility in each region and some of them can be transported from the other region to meet the demand occurs frequently in manufacturing industries such as chemical industry and machinery (or food) industry. [1]

The problem addressed in this paper is meaningful in that the transportation capacity is additionally considered to impart a sense of reality as an extension of the previous model.

In 1990s, there have been many efforts to resolve the integrated problems considering key business processes of production, storage and distribution, from original suppliers through end users. [12-14] However, they have assumed the cost functions to be linear due to the intrinsic complexity of the concave function. But it is more realistic that the cost functions are assumed to be non-decreasing and concave reflecting the economies of scale. In this paper, based on the traditional dynamic lot-sizing problem, we consider integrated production, inventory and transportation problem. We assume that the cost functions are to be non-decreasing and concave in order to represent the realistic cost functions. Though the problem suggested in this paper does not resolve the general integrated supply chain problem, it is meaningful in respect of applying more realistic cost functions to somewhat simplified supply chain problem. We consider a capacitated production, inventory and transportation planning problem for which two production regions are involved and time-dependent capacity bounds on transportation are imposed. In each region, a single facility manufactures two items (or products) each taking a fixed part of the whole production amount to satisfy its own demands over the discrete

periods. In the problem, we assume that the transportation is allowed only for product 2 from one region to another.

: Amount of production for product

: Amount of inventory for product

at the end of period

: Transportation amount of product 2 from region

: Transportation capacity of product 2 from region

Production, transportation, and inventory holding costs are assumed to be non-decreasing and concave. We can let

under the assumption of

Using the parameters, decision variables, and cost functions, the complete model is presented below.

The objective is to minimize the total costs incurred, specifically the production, transportation, and inventory holding costs over all periods.

-1 and the production at the period

. Similarly, the equations (2) represent the amount of inventory of product 2 at the end of the period

is non-decreasing concave and the constraints (1)-(5) define a closed bounded convex set, there exists an extreme point optimal solution.

3.1. Characterization of an Optimal Solution

To derive the extreme flow properties it is convenient to view the problem (PB) as a network flow problem, as shown in Figure 1. 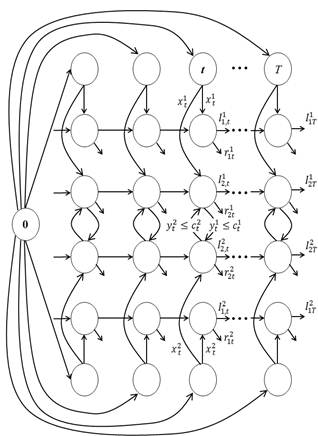 It can be shown easily that a feasible flow in the network of Figure 1 corresponds to an extreme flow if and only if it does not contain any cycle with positive flows. [16] Furthermore, an extreme flow is composed of some nodes and arcs, where each of the nodes has at most one positive input. [3] These extreme flow properties lead to the following sufficient conditions for an extreme point solution of the given problem:

However, the extreme flow property clarified in [3] is for single source networks, so that it is not always satisfied in our model. Therefore, we shall find some additional properties that are useful for our algorithm development.

be called an inventory point if

for at least one of both

. And a production (transportation) point of a schedule

is defined as a period

Henceforth, we shall assume in the remaining part of this paper that the equation (6) is satisfied.

is concave, the problem then attains its minimum at an extreme point of the set. The constraints can also be shown to be totally unimodular. Thus, a solution search will be processed for extreme point solutions with integer inventories. It will first be discussed about the optimal solution properties, which will be used later for an algorithm development.

be the consecutive inventory points. If

is an extreme point, then the following properties are satisfied:

i.       There exists at most one production point between

ii.       There exists at most one partial (positive but less than its capacity) transportation period between

Proof of (ii). Suppose that (ii) does not be satisfied. That is, there exists two periods

Hence, the following two solutions also satisfy (i) and are feasible:

Since the original solution is represented in a linear combination of the latter two, each having partial transportations at

cannot then be an extreme point solution.

The case of which

can also be proved similarly. Thus, the proof is completed.

The results of Theorem 1 lead to Corollary 1, which indicates that any optimal solution does not allow mutual transportation in a period.

is an optimal solution, then

Proof. Its proof will be done by contradiction. Assume that

. That is, one of the following cases is satisfied:

From the proof steps of Theorem 1, we see that any feasible solution

including case (i) cannot be an extreme point solution and consequently not be an optimal solution.

In case (ii) and (iii), the following two adjustments are possible for an alternative transportation policy:

, then adjust it as

, then adjust it as

These adjustments show that

We reformulate the problem (PB) as a dynamic programming problem. The approach uses the vector

to represent the state space, but at the period

for at least one of both

From the totally unimodular property, it follows that an extreme point consists of integer values. Hence, a search for an optimal solution is limited to integer values of

that satisfy the conditions,

. Therefore, our goal is to find an optimal sequence of successive inventory points and the associated solutions of the sequence. The minimum cost incurred between any two consecutive inventory points can be computed using the aforementioned properties for extreme points.

be the minimal cost between two successive inventory points

. Then, we can define the subproblem value

are inventory point values, and

satisfy the properties described in Theorem 1, for all

Constraints (i) require a feasible solution over periods

Since all the possible sequence of those

subproblems include all the extreme points of the constraints (1)-(5), there exists an optimal solution of (PB) that consists of a sequence of subproblems with

values as defined above. The step-by-step procedure to compute each

value will be described in detail later in this section.

is an inventory point with a value

values are known, the problem (PB) can be reformulated as a dynamic programming problem:

is the set of all possible inventory point values at period

. The equations (8) and (9) indicate a backward dynamic procedure starting

represents the cost of an optimal solution.

values for each (u-v) subproblem solution. Thus we will concentrate our efforts on solving more efficiently such subproblems.

be the production amount of product

as successive inventory points. Then,

From the assumption that

be the transportation amount from region

. Then equation (11) can be expressed as follows:

denote the absolute value of

, we can see from Theorem 1 that either

. In other words, if

. Further, if any one of

is negative, then the subproblem is also infeasible.

is required to satisfy the demand

, it is required that

. This implies that in this case, the production point in region

is fixed at period

These properties lead to the following propositions, which describe the feasible location of a transportation point for a (u-v) subproblem.

Now, consider the additional conditions such that

These conditions can make the solution search rather easy. This will be verified in Proposition 1.

subproblem satisfying the conditions (14). If any feasible solution

satisfies the conditions that

, then it cannot be an optimal solution.

Proof. For the case of in which

, we see from Theorem 1 that

is not an extreme point solution.

Consider the other case that

, we also see from Corollary 1 that

is not an optimal solution. Otherwise, there exists

From the new feasible solution

, we observe that the inventory holding cost doesn’t change in view of (14) but the transportation cost decreases because of

cannot be an optimal solution.

In the case that

), we can similarly prove that

is not an optimal solution. This completes the proof.

The following proposition can be easily showed from Proposition 1.

Proposition 2 If in a (u-v) subproblem,

for an optimal solution for

Under the assumptions that

) and the equation (14) holds, the results of Theorem 1, Corollary 1 and Proposition 1 can be applied to solve such

subproblems and give the associated

The step-by-step procedure to compute each

value is presented as follows:

(Step 2) If in each region only period (

) can be a candidate for production point, then let

such a period is not specified, fix some period

will then be moved in turn from

(Step 3) Once the production point is fixed at period

, it follows from Theorem 1 that

. For the sake of convenience, we can let

(> 0), then we need adjust the demands for product 2 in region

. There is no loss of generality in assuming

(> 0). That is, determine first the periods that can be covered by

and then adjust the demands

’s to give the new demands,

, for product 2 in region

In this case, we can let

and then accomplish the above (Step 3)-ii. It follows that

(Step 4) As a matter of fact, the inventory

at the end of period

can be regarded as the additional demand at period

. So, the adjusted demand at period

, must be adjusted once more by adding the inventory

(Step 5) With the adjusted demands for product 2 in region

, we can decide the possible transportation amount in each period using Theorem 1, Corollary 1 and Proposition 2. For this step, we can use the shortest route algorithm proposed by Florian and Klien [4], additionally, eliminating vertices having inventory levels indicating infeasibility, i.e., those unsatisfying

value represented by the equation (7) among the alternatives obtained by (Step 1)-(Step 4).

In this paper, we extended the approach developed in the previous paper [1] to time-dependent capacity bounds on transportation. Using a network flow approach, properties of extreme points were identified. We showed that a production and transportation planning problem for which two production regions are involved with capacity bounds on transportation can be solved optimally using a dynamic programming algorithm. It would be interesting to study the added value of a more general multi-region, multi-product constraints with capacity bounds and more efficient algorithms to find an optimal or near-optimal schedule.