Academic study on street space has emerged from more than centuries ago dating back to Marcus Vitruvius Pollio. But a social-cultural perspective on street space gets an increasing attention especially from 19th century. Even thought existing references emphasize street space quality at different aspects, most with a narrow focus on urban city design.

Addressing on the relationship between space design and human interaction, Jan Gehl illustrates that only if outdoor space is of high quality, optional activity and social activity would take place[8]. Different space environment will create different neighborhood, feelings of security and fear of crime [9, 10] as well as different social interaction and perception [11]. Lynch summarizes four key characteristics of a path. He points out that a path should be with identifiability, continuity, directionality and metrizability [12]. This can be extended to street analysis because street basically has a traffic function like a city path. Jane Jacobs [13] pays more attention to the importance of urban street vitality, emphasizing the vitality of city street is rooted in the safety and the diversity. Research by Chen et al. [14] supports that the high quality of traditional commercial street is a need for encouraging diverse optional and social activities. Kisho identifies street is the main feature of traditional oriental city and town [15]. The street should be able to increase public activities. Yoshinobu Ashihara thinks street is an exterior space formed by architecture’s inner order [16]. Exterior space is more meaningful than the natural space and has close relationship with human behavior.

3.1. An Introduction of Xing’ping Town

Xing’ping town is located northeast of Guangxi Zhuang Autonomous Region, P.R.China (Fig.1) and under administrative jurisdiction of Yangshuo County, Guilin City. Along the waterways of Lijiang River National Scenic Area, the town preserves affluent historic relics and is rich in Karst natural landscape. The picture of Li River landscape in Xing’ping is depicted on the reverse side of current 20-Chinese banknote. Tourism in Xing’ping started in the 1990’s. It becomes a famous tourism ancient town since the then U.S.A. President Bill Clinton visited Fishing Village at Xing’ping town in 1998. In 2007, Xing’ping was awarded as Historic Town of China (the third batch) by Ministry of Housing and Urban-Rural Development of the People’s Republic of China and State Administration of Cultural Heritage. In 2011, it was endorsed as National Characteristic Landscape Tourism Town (the second batch). According to Xing’ping Town Government [28] its tourists were up to 1.5 million and tourism revenue 120 million Yuan in 2010. Currently, its main tourist attractions are the old streets in the town and the Lijiang river landscape on the periphery of the town. 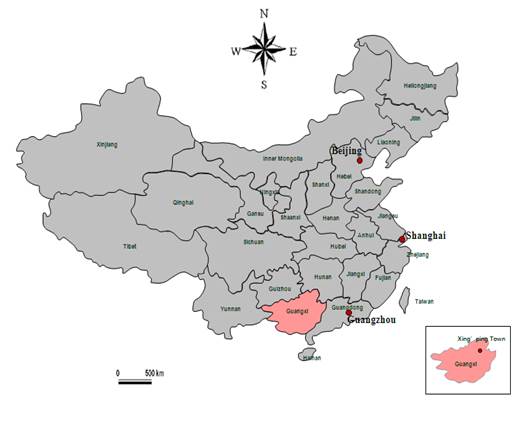 Figure 1. Location of Xing’ping town in map of China. 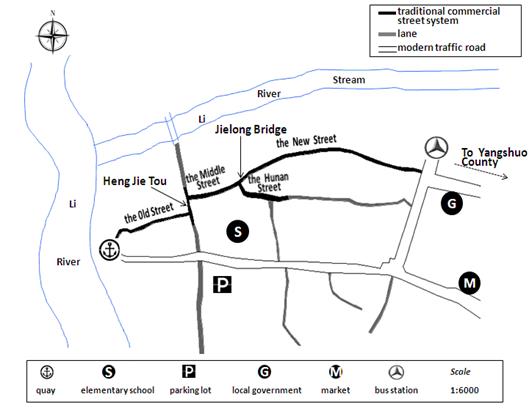 Street width is consistently around 5 meters and similar building height along streets’ two sides. Architectures along the street were originally wooden construction but were later changed to masonry-wooden mixed structure. Building has two stories. The ground floor was once used as shopfront and paved with local blue flagstones. Almost every street building remains the traditional sloping roof, horsehead walls and upturned eaves.

Historically, Xing’ping Town's shops and fair market gathered along the Old Street and New Street. Most former inns and stalls were in Hunan Street. This area was a commercial-residential integrated space. In 1980’s, Xing’ping began to develop new district in urbanization process. Farmers’ fair market was moved out and a new-built commodity trading market was built up at the entrance of the town During that period, the old commercial streets fell into recession. This condition lasted until tourism came in the town in mid-late 1990’s. Some time-honored brands, such as Songhua Sugar of Feng’s Family and Bamboo & Wood Products of Zhao’s Family reopened in the traditional commercial street to cater to tourists. There also appear tourist souvenir shops, painting shops, restaurants, bars and other new commercial formats. In each street section, small family-run shops such as repair shop and bee candy shop are served both tourists and the locals. With tourism development, the traditional commercial street seems to revive in Xing’ping. But our fieldwork also finds there are many problems, such as locals continuously move out to new town district and shops are selling similar low quality products in the street.

With literatures and fieldwork in Xing’ping, this study designs the evaluation indicator system (Table 1) and a primary questionnaire. After questionnaire pretest, it removes two candidate indicators with low importance level which are "Greening and sanitation facilities (V19)" and "Intangible cultural elements (V26)". The final 5-point Likert Questionnaire has two parts. The first part is demographic profile and background information questions. The second part is made up of 24 themed measurement items.

The survey was conducted on October 15th – 17th, 2015, using simple random sampling and household survey methods. The informants included main space users in Xing’ping traditional commercial street space. A total of three hundred questionnaires were distributed. 252 pieces of questionnaires were reclaimed in which 222 pieces were valid. The callback rate is 96.1% and the questionnaire-reclaiming efficiency is 88.1%. Table 2 shows basic information of the sample.

Cronbach's Alpha Based on Standardized Items is 0.786. Generally, internal reliability of the scale data is satisfactory. The Bartlett's Test of Sphericity Approx. Chi-square is 3155.007 and Sig.=0.000. Based on the output the KMO is 0.812(>0.5). This shows that the degree of common variance among the variables is quite high, therefore factor analysis can be conducted. We use PCA (Principle Component Analysis) to do data structure analysis.

Taking the principal components as the new variables, a logistic model can be obtained, in which the dependent variable is traditional commercial street space quality. The logistic model is giving as following equation (1). Variables in the equation are showed in Table 5. Finally, we studied Cox & Snell R Square and Nagelkerke's R square as measures of explained variation (Table 6). The Nagelkerke R Square shows that about 63% of the variation in the outcome variable is explained by this model.

Table 5. Variables in the equation.

The results show spatial culture factor is an essential factor. Xing’ping town government body should regularly maintain the street spatial interfaces in accordance with its historic and regional style. Movable commercial stalls should be allowed to exist in an appropriate way instead to remove them totally away. Local residents are living culture resources and support the long-term development of the street. Supporting resident-owned business or allowing residents to keep their traditional way of living are good ways to retain residents.

On spatial function factor, this case study indicates Xing’ping town should pay attention to increasing commercial value and applying a more active and dynamic way to enhance commerce absorptive capacity. The mixture of different commercial formats is good way for traditional commercial street. In the near future, a commercial format planning will help promote the street’s spatial vitality.

Spatial activity factor is the key to the vitality of traditional commercial street space. With regularly folk customer activities, cultural performances and featured market fairs, street can become an important trade and social interaction center to increase the meets and interactions among different people in tourism environment. Be sure most those activities should promote by locals.

The traditional commercial street in tourism ancient town also needs the supporting factor to have a good space quality. Local government and shop owners should jointly ensure the street safety and maintain street a good word-of-mouth. A tourist security service station will soon give help on this.