Abstract:Coastal district Badin of Sindh Pakistan is known as hub of pollution because of surface drain canal network, which continuously carries industrial effluents, municipal wastes, pumped saline water and excess agriculture water of three districts. Agriculture lands, ground water, lakes and Lagoons of the district have been contaminated with toxic heavy metals due to improper infrastructure of Left Bank Outfall Drain. The object of this study was to study the pollution contributed by drains of coastal areas of Badin. Nineteen samples of water were collected from different locations of drains on quarterly basis. Arc GIS was applied for vector mapping. Average results of parameters were EC 5.975 ± 4.956 mS/cm , TDS 3254.17 ± 2810.342 mg/L, Hg 0.0234 ±0.0118 µg/L , Ni 0.0076 ±0.0106mg/L, Cd 0.0245±0.0179mg/L , Zn 0.0393±0.0254mg/L , Cu 0.0890 ± 0.0911 mg/L, Fe 0.0546 ±0.0883mg/L.The results indicated that all parameters were within National Environmental Quality Standards (NEQS) limits of Pakistan for Industrial effluents. High concentration of TDS, and E.C, near thecoastal sampling areas, confirmed that, sea water has been facilitated, with backward flow by same drains due to sea tides. Heavy metal results were also within permissible limits of Food Agriculture Organization (FAO) for agriculture use. Drain water may be used for saline agriculture purpose, if properly checked under Environmental Protection Act of Pakistan 1997.

The river Indus of Pakistan irrigates 35.7 million acres of land. The irrigation network system has also given rise to water logging and salinity threats to agriculture, with passage of time. The coastal areas have been adversely affected .The Left bank outfall drain (LBOD) project was implemented from 1987 to 1997. The project was to mitigate water logging and salinity of 1.27 million acres of three districts, of Sindh province. The LBOD initially was aimed to drain out pumped saline water and agricultural runoff but municipal and industrial wastewas also thrown in this drain.The coastal district Badin became the final path way of this contaminated water to Arabian Sea. LBOD has a total discharge capacity of 4400 cusec and flows throughout the year [1,2,3].

LBOD is bifurcated into two main surface drains named KPOD (KadhanPateji Outfall Drain) and DPOD (DhoroPuran Outfall Drain). DPOD discharges into Shakoor Lake which is a joint Lakeof Pakistan and India (Fig.1).KPOD, flows with damaged infra structurepath of Tidal Link and Cholri Weir, reaches at Shah Samdo Creek and finally joins ArabianSea. It contaminates all wetlands of the coastal areas.Cholri weir and Tidal link, the important components of LBOD were constructed to maintain wet lands and high tides of sea. Both infrastructures became completely damaged after cyclone of 1999[1,2,3,4,5,6].Consequently sea tidal water got quick access to wards inland areas which was not possible before. Hence the ecology of the coastal areas, mostly of wetlands, has been completely changed since two decades[7,8].The World Bank was a major contributor of finance and technical assistance of the mega project, LBOD. The World Bank’s Panel in 2005-6 reported that the failure of LBOD project was due to faulty design, underestimating the extreme meteorological risks and improper follow up of the recommended policies and procedures[9,10,3].The Panel also concededthat the little attention had been paid to the impacts on the environmentally important and Ramsar recognized coastal lakes and lagoons [10].This study was conducted to investigate the heavy metal pollution, carried by LBOD and other link surface drains near the coastal lines of Badin. At the same time to find out pollution contributed by sea tidal water from Arabian Sea.The results were compared with permissible limits of NEQS of Pakistan for municipal and industrial effluent. The results were interpreted by using Arc GIS application.

2.1. History Background of Area of Study

Badin is positioned between 24º-5` to 25º-25` north latitude and 68 21’ to 69 20’ east longitude [5].The district joins in south with the Arabian Sea and Rann of Kutch. The agriculture and agro based industry are the sources of economy. Coastal district of Badin is a flat, flood prone land, where required fresh canal water does not reach.The land and groundwater are saline. Climate of this area is unreliableand has proved to be very fatal to natives.Badin is situated in Zone II with respect to cyclonic activity which suggests that the district is exposed to tropical cyclones[2]. Stormy cyclones, monsoon rains, earthquakes and droughtshave aggravated already deteriorated conditions of the coastal areas.

Ecological degradation of Badin coastal area is result of neglecting attitude, considering this area, only a hub and pathway for disposable liquid waste towards Arabian Sea.Environmental, socio economical issues of these areas have never been taken properly and seriously. Deteriorated condition of this region is due to, two main surface drain system introduced in this area in 1960s and 1980s. Kotri Barrage drain system fromT.M.Khan,comprised of KaroGhungro(1960) and FuleliGuni(1959) Outfall drains, both drains, enter from west side of district,polluting coastal wet lands.FulleliGuni outfalls drain ends into MehroLake. KaroGhungro surface drainage System ends in Sanhro Lake. Both lakes are part of Ramsar recognized Jabholagoon (Fig. 1).Both drains carrying sugar mill effluents along with agriculture runoff, reducing bio life of wetlands[1,2,3,6,7].

The contaminated water of Kotri drain and LBOD, meet at saline Cholri shallow lake. It is zone of mixed polluted water (Fig. 1).A hub of pollution sink has been developed mostly after the destruction of Cholri weir and disappearance of tidal link after cyclone 1999[7].Costal tidal water strikes near village Golo Mandhro boundary wall at present time (Fig1). 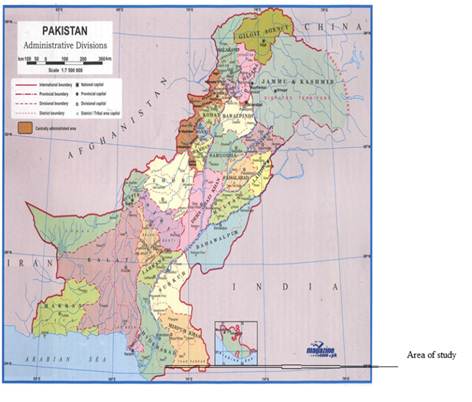 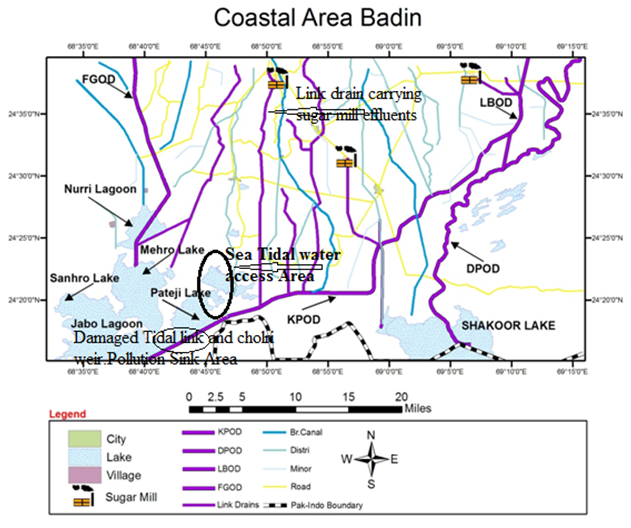 GIS is apowerful tool for collecting, storing, organizing, transforming and displaying data, for specific aims from the real world [12,13,14].GIS is increasingly used in Environmental pollution studies because of its ability in spatial analysis and understanding thematic maps [15,16].Arc GIS 9.2 software was used for mapping and data interpretation. Arc GIS software was applied in this study as an important analyzing tool. Based on the sampling locations, with the utilization of coordinates of GPS, a point feature map showing the position of sampling location was prepared. By using Arc map of arc GIS software, Monitored water quality data was stored as attribute table.Graduated symbols and colors were selected using symbology option.

* NGV (No health-based guideline value recommended by NEQS of Pakistan). 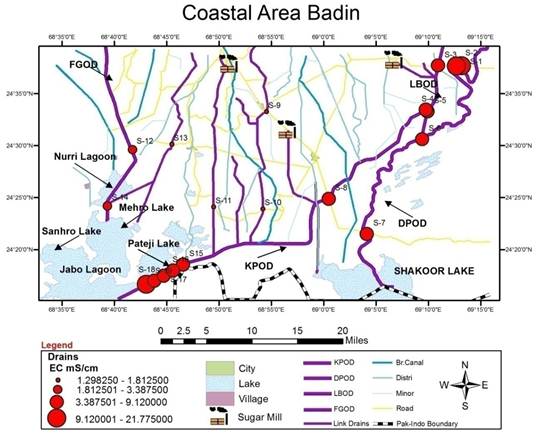 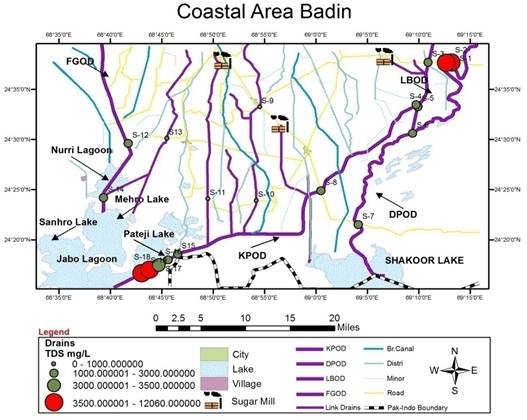 The results of TDS are shown in Fig.3, showing different ranges of concentrations from 696 - 12060 mg/L. Results were divided into four classes with graduated circles, represented by green and red colors. Green color was selected for representing permissible limit values (3500mg/L) forNEQS of Pakistan for industrialeffluents.The concentration above NEQS limit was indicated by color red. Sampling areas of S-1, S-2, S-18, S-19(table1 & 2), had high concentrations of TDS than the NEQS limits for industrial and municipal effluents. Samples S-18 and S-19 were closer to damaged tidal link area of LBOD, which was linked to Arabian Sea by shah SamdoCreek (Fig1).Increasing trend of TDS was seen close to coastal areas. The same trends continue,as was reported for, Amir Shah Drain of Badin coast,which had TDS concentration range within 4221 mg/L [2].

The concentration of Nickel as shown in Fig. 5, highlighted by graduated circles, with green color, by using symbology from arc map. Nickel concentration results (0.0012 - 0.0377 mg/L),were within describedpermissible limits (1 mg/L) of NEQS.It was observed that near damaged tidal link area, where huge coastal tidal water intrudes towards wetlands (Fig. 01), nickel concentration was found to be reduced. Theresults are in agreement withstudy conducted bySaif et al. [17]. 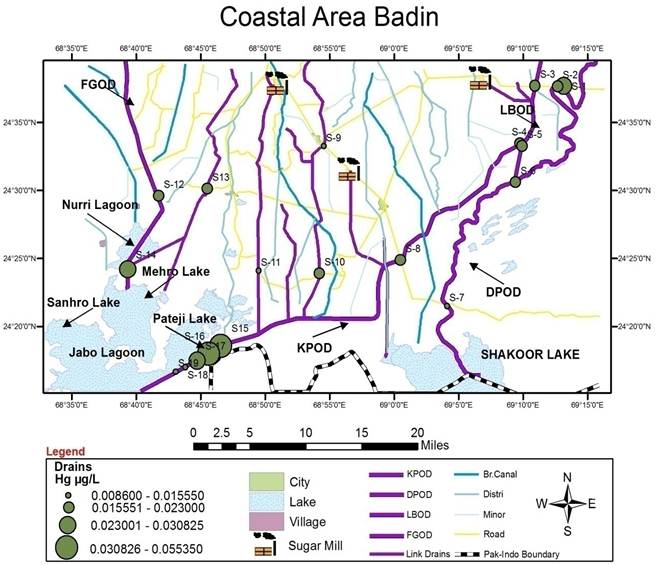 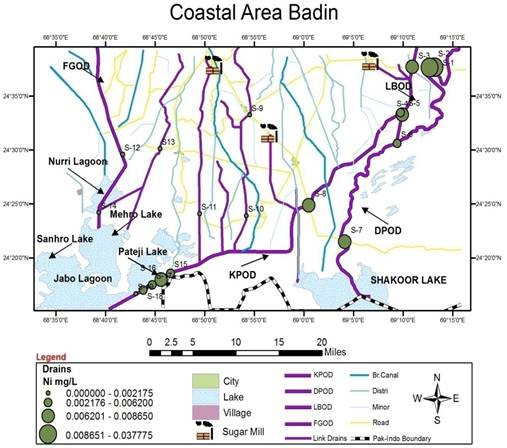 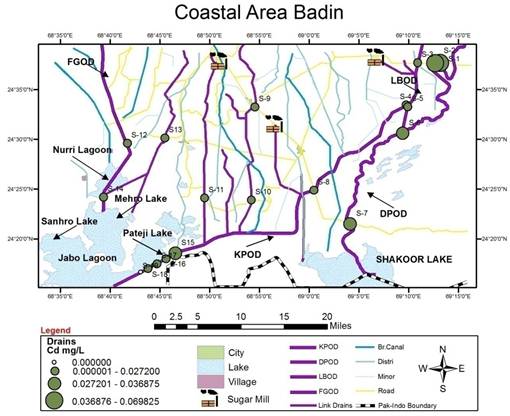 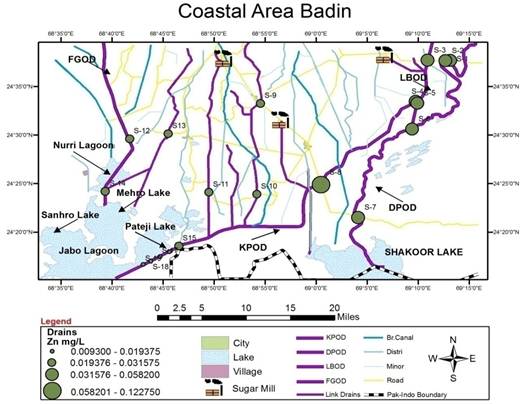 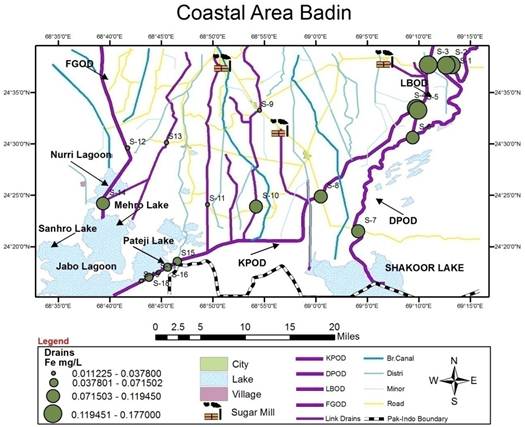 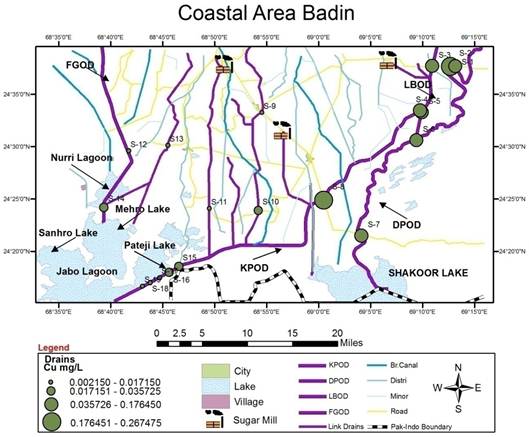 The Results of concentration of cadmium are showing  Fig6, ranged between 0.00148 -0.0698 mg/L. The cadmium concentration in all sampling areas was found to be within limits (0.1 mg/L) set by NEQS. High concentration of Cd was observed at sampling area S-1, S-2.Concentration of cadmium was found to be diluted where KPOD enters near disappeared Cholri weir area (Fig.1).The cadmium concentration in all sampling areas was also found to be within permissible limits of FAO (0.1 mg/L)for agriculture use [18].According a study conducted for industrial effluent near Karachi, reported concentration of Cd was 0.004-2.4 mg/L, by Saif et al. [17]. Similar results were also reported by Tariq et al.[19] andAli et al. [24] for assessment of industrial and sewage effluents.According Iqbal and Edyvean,Khuhawar and Majidano , Devnani and Satsangee , andIqbal et al.[20,21,22 and 23] the major sources of Cd contamination are batteries, fertilizers,electroplating, smelting, paint pigments, mining and alloy industries.Though only sugar mill industries can be traced in district Badin(Fig 1),to find out other industries contributing cadmium pollutantsis very dificult task for present study, as LBOD caries industrial effluent of three distrits which are hundreds of km away from present study of areas.

Pollution caused by LBOD,and link drains of the coastal areas of Badin have caused great problems. A positive approach for understanding the situation was developed by using GIS software. GIS maps revealed the extent of concentration of contaminatingpollutantsof drains and link drains of the coastal areas.Present study of drainsrevealed that main LBOD, KPOD, DPOD as well as link drains are carriers of pollutants including heavy metals.They bring industrial effluents,along with, pumped saline water, agriculture run off, and municipal waste water. Present study indicated that heavy metals are present within NEQS limits for municipal and industrial effluents of Pakistan.Low detection of heavy metal concentration in KPOD and DPOD is because of huge flow of water quantity exceeding 2000 cusecs, most of times. Therefore heavy metal concentration gets diluted.It was observed that at near coastal wetlands, the heavy metal pollutants were found in low concentration due to presence of excess tidal sea water. The Phenomenon for TDS and E.C was very opposite as compared with those of heavy metals.All drains indicated that they are very saline. High concentration of TDS, and E.C, near the coastal sampling areas confirms that sea water has been facilitated with backward flow by same drains due to sea tides.Poor infrastructure of LBOD has polluted the coastal zone, mostly due breaches in KPOD near zero point and completely disappearance of tidal link and cholri weir infrastructures. The results were found to be within limits of NEQS and FAO for industrial and agriculture purposes respectively.Hence water of LBOD can be used as a saline agriculture if other contaminants checked properly according   to NEQS of Pakistan.