Heavy Metals Contamination in Soils and Water in the Vicinity of Small Scale Gold Mines at Londoni and Sambaru, Singida Region, Tanzania

Abstract: This study was carried out to determine the concentration of heavy metals in water and soils in the vicinity of mines and processing units in small scale mining areas at Londoni and Sambaru. Heavy metals concentrations ranging from 1.7 to 53.8 mg/kg dry soil weight (dw), 8.7 to 22.24 mg/kg dw, 0.42 to 2.61mg/kg dw and 3.19 to 29.42 mg/kg dw were detected for Hg, Pb, Zn and Cu, respectively. Concentration of the same metals detected in surface and groundwater samples ranged from 0.013 to 0.17mg/L. Concentrations of mercury detected in soil samples were above Tanzanian maximum limits of mercury contamination. Sources of the metals contaminations were envisaged to be amalgamation and burning activities, improper waste rocks and tailings disposal, discharge of mine water to the surroundings and leachates from waste rocks and tailings. The study concluded that immediate adverse effect may not be feasible but continuing contamination may lead to serious human health and environmental problems.

Mining sector plays an important role in economy and development of many countries. Significant contribution is on the employment creation and foreign currency earnings that are essential for socio-economic development [1]. Extraction and purification of mines involves a number of stages or activities, each of which has potentially-adverse impacts on the natural environment, society and cultural heritage, health and safety of mine workers, and communities living in close proximity to operations [2]. In practice, mining activities are categorized in large, medium and small scale based on capital investment, labour and technology requirements.

Focus in the mining sector should not be only on the economic aspects, but on sustainable environmental management, which is part of the integrated global efforts for environmentally friendly production processes [3]. Environmental impacts are common in each mine regardless of the scale of mine but differ from mine to mine depending on different factors including type of minerals and technology used in mining and processing the minerals of interest. The adverse environmental impacts for small scale mining are in general higher than those of other types of mining [4]. This means, the small scale mining is dirtier per unit of output than medium-sized or large and modern mining operations.

Various cases of negative environmental impacts have been reported to occur in small scale mines due to tailings rich of mercury, sewage, industrial wastes, lubricants and other toxic chemicals entering into rivers and soils through runoff and percolation as a result of lack of proper control systems and disposal [5], [6].

In Tanzania several studies in mining areas have revealed that environmental problems such as land degradation and pollution are associated with mining activities. For instance it was revealed that, burning of amalgam in open fire has been conducted at Rwamagaza area in Geita and Blue Reef mines at Nyakagwe and Nyamtondo [8]. High concentrations of heavy metals including Pb, Cu, Cd, Zn and As have been reported in water and sediments close to North Mara Gold Mine and Mgusu gold processing areas due to surface runoff [9], [10].

The mining industry has an obligation to prevent release of toxic metals into the environment thereby ensuring that humans, birds, animals, and aquatic life are not endangered by the storage and discharge of wastewaters [11]. The results presented in this study therefore form part of the worldwide effort to control the environment against anthropogenic pollution. The objective was to ascertain heavy metal pollutants levels in the selected small scale mining areas. These baseline data are important in designing the management and conservation programmes in the small scale mining areas in Tanzania. 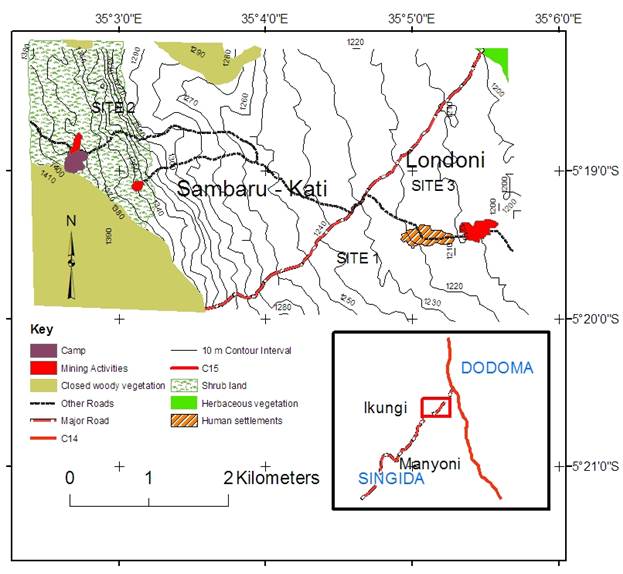 Figure 1. Land cover and different human activities around the mining sites in Londoni and Sambaru.

Water and soil samples were collected from mines and processing units in March and June 2013. The sampling sites are described in Table 1 and indicated in the map in Fig. 2. The indication of sampling sites in the area was enables by Global Position System (GPS) points that were measured during sampling campaigns.

Water samples were collected by grabbing technique and placed in 1000 mL plastic bottles. The samples were collected from community bore holes and dug well, mine shafts drainage, abandoned shaft and stagnant water in the vicinity of amalgamation processing units (Table 1). Before collection, the sampling bottles which were previously soaked overnight with 10% HCl and rinsed with distilled water were rinsed with water to be sampled [12]. After sampling, the samples were measured for temperature, pH, and EC using a hand-held water quality portable monitor. Three measurements were made for each parameter at each sampling location (n=3) during sampling expeditions, and mean values were calculated. The instrument was calibrated at the beginning of every sampling day. The collected water samples were then filtered, preserved with concentrated HNO3, stored in cold boxes and transported to the Laboratory of the School of Environmental Science and Technology (SEST), Ardhi University, where they were immediately analyzed upon.

Soil samples were collected from thirteen established sites (S1-S13) at depths of 0 to 15 cm and 15 to 30 cm (Table 1). Twenty six measurements were made for each parameter at each sampling location (n=2) during sampling expeditions, and mean values were calculated. To ensure uniform volume of soil is taken through the full depth of each sampling increment, the samples were collected by using probe and auger design as described in literature [13]. The collected soil samples each of 0.5 kg were stored in polyethylene bags, placed in cool boxes and transported to SEST laboratory for extraction and analysis. 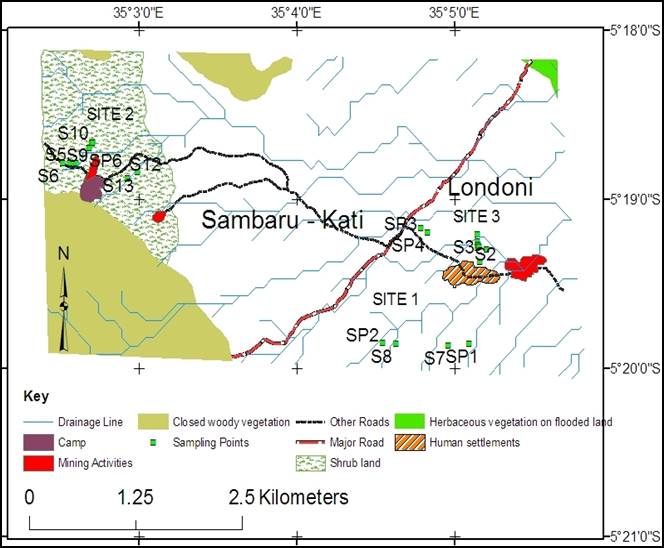 Figure 2. Map showing sampling points in the vicinity of mines and processing units.

Table 1. Description of sampling sites for soil and water samples.

Heavy metals determination was carried out by Perkin Elmer Analyst 100 AAS with Perkin Elmer HGA 850 Graphite Furnace and Perkin Elmer AS 800 Auto-sampler made in Germany [12]. For analytical quality assurance, after every five sample readings, standards were run to make sure that the margin of error is within 5%. In every analytical batch, 10% samples of all were analyzed repeatedly to ensure the precision and accuracy of analysis. Standard reagents and blanks were also used in the process of analysis to ensure the precision. A 10 cm long slot-burner head, a lamp and a standard air-acetylene flame were used. The detection limit was 0.01 ppm (0.01 mg/kg), slit width 0.70 nm and elements wavelength were 253.7, 283.3, 213.9 and 324.8 nm for Hg, Pb, Zn and Cu, respectively [12]. Water samples, previous filtered and preserved with HNO3 were analyzed directly into AAS, without any further treatment. The soil samples were oven dried at 105°C for 24 h, followed by grinding and sieving using 1 mm sieve. 0.5 g of dry soil sample was poured into a graduated test tube and mixed with 2 ml of aqua regia 1:3 (1 conc. HCl: 3 conc. HNO3). The mixture was digested on a hot plate at 95°C for 1 h and allowed to cool to room temperature [14]. The sample was then diluted to 10 ml using distilled water and left to settle overnight. The supernatant was filtered and analyzed into AAS.

Although Pb and Zn levels were below maximum allowable concentrations, continuing kettle keeping around mining areas and cultivating near the amalgamation units in Londoni amalgamation centre can eventually lead to human health problems.

Concentration of mercury within the vicinity of mines and processing units ranged from 1.7±0.49 mg/kg to 53.8±13.27 mg/kg dw (Table 2). The processing unit at Londoni amalgamation centre was constructed indoor while that of Sambaru was constructed outdoor. In outdoor ponds, tailings were deposited above unlined surface and exposed to the environment. High concentration of mercury at immediate vicinity of outdoor than indoor units might be due to transportation of tailings rich in mercury by wind or through leaching especially during rainy season compared to the indoor units where tailings rich in mercury are safe stored. Fig. 4 shows variations of mercury concentrations in soils around outdoor and indoor amalgamation units. The results indicate that soils taken at the immediate vicinity of processing units are contaminated by mercury at higher level than the Tanzania maximum limits of mercury contaminants in soils which is 2mg/kg [18].

Table 2. Mean concentrations (±SD) of some heavy metals in soils of the study area. 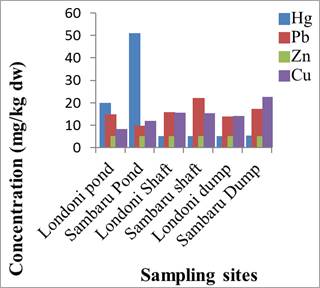 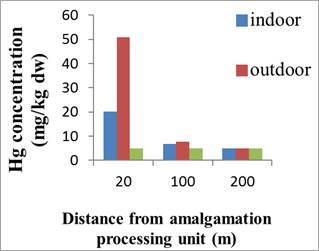 Figure 4. Concentrations of mercury in soils.

Table 3 shows concentration of heavy metals in water at the study area. Results indicate that concentrations of mercury at Londoni borehole (SP3) and dug well (SP4) were below the instrumental detection limits of 0.01mg/L. These wells were located upstream to Londoni processing centre, therefore might not be affected by either overflow from amalgamation ponds or drainage from tailings deposited at Londoni processing centre. Concentration of mercury in water from active shaft (SP1) and abandoned shaft (SP2) both from mine at Londoni is related to illegal panning by mercury which takes place in mining areas or seasonal streams during rainy season. Due to water problems in Londoni and Sambaru, miners and communities are using water from abandoned shaft for domestic purposes including drinking, although concentration of mercury in this shaft is above the Tanzania maximum limit for drinking water of 0.001mg/L[18]. Mercury contamination in drinking water is reported to cause developmental disabilities as it affects brain, liver, kidney and central nervous system. The mercury problem in Mina Mata Bay, Japan that caused birth to infants with severe developmental disabilities is one of the most severe reported effects of mercury [19].

Concentration of lead was below the Tanzanian maximum limit for drinking water of 0.1mg/L at both active shaft (SP1) and abandoned shaft (SP2), but it was higher than the WHO recommended guideline concentration of 0.05mg/L at active shaft (SP1). Even the lowest doses of lead can impair the nervous system and affect foetus, infants and children, resulting in lowering the intelligence quotient (IQ).

Concentrations of zinc in all water samples were below the instrumental detection limit of 0.01mg/L, while that of copper were within the Tanzanian maximum limit for drinking water of 3mg/L [18]. These metals are among the important trace elements that play a vital role in the physiological and metabolic process of many organisms. Higher or lower concentrations in organisms are undesirable and can cause health problems [20]. For instance severe deficiency of copper can cause demineralization of bones, demyelimination of neural tissue, anemia, fragility of arteries, myocardial fibrosis, graying of hair [20].

Table 3. Mean concentrations (±SD) of metals in water samples within vicinity of mines and processing units.

Fig. 5 shows variations of heavy metals in water samples collected around mining areas. With exception to water collected from stagnant water Londoni, in other locations the abundance of the metals in individual site were in the order of Cu>Pb>Hg. This suggests that rocks and mining wastes are rich in copper and lead, while the mercury originates from amalgamation units. 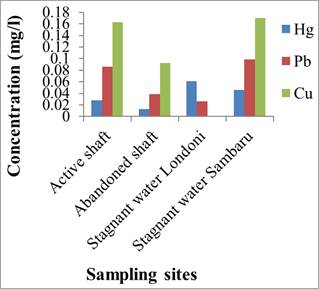 The results of this study revealed that water and soils in the studied areas around the small scale mines of Londoni and Sambaru are contaminated with heavy metals. The concentrations of contaminants in most of the sites were considerable within the recommended national and international limits for drinking water, and soil for habitat and agriculture. The amalgamation and burning activities, improper waste rocks and tailings disposal, discharge of mine water to the surroundings and leachates from waste rocks and tailings appears to be the major source of the heavy metals in water and soils of the area. Immediate adverse effect may not be feasible but continuing contamination may lead to serious human health and environmental problems. The problems identified under this study therefore indicate necessity to initiate actions to remediate soil and water in the area as well as to control further contamination.

The authors wish to express special thanks to Prof. R. Kiunsi of Ardhi University, Tanzania for the insight that leads to conducting this study. Mr. G. Senge, inspector of mines and explosives at Central Zone mine office is acknowledged for his constructive ideas that were useful during field campaigns. Mr. A. Ndimbo and Mr. R. Mbulume, laboratory technicians at Ardhi University, for their assistance throughout the field and laboratory works.