On the Assessment of Power System Stability Using Matlab/Simulink Model

Abstract: Several voltage collapses have been experienced by most practical power systems in recent times in Nigeria. These have been mostly attributed to island formation within the network as a result of switching out of critical buses within the network. This paper assesses the stability of a practical power network of the Nigerian National Grid (NNG) with reference to a critical transmission line which could cause island formation as a result of fault within the NNG network. The Matlab/ Simulink model for both the steady-state and dynamic behaviours of the critical bus within NNG network is presented. The simulations for various fault conditions are also presented. The results obtained from the simulations are discussed. From the simulation results, high flow of reactive power and current, as a result of various faults along the transmission lines, were observed. Furthermore, non-sinusoidal waveforms generated from the simulation results show an indication that a high degree of compensation is required at the studied bus. The study uses Benin bus of NNG with respect to Benin-Onitsha-Alaoji 330-kV transmission network due to its location and sensitivity within the grid.

Power system stability is a subject of great interest to power system planners and operators in recent times. In practical power systems, it is expected that power generation must be equal to power demand including losses to ensure constant speed and frequency of operation. Unfortunately, the load impressed on the system does fluctuate in a random fashion. It is therefore virtually impossible to accomplish equilibrium of power generation and power demand. An excess or deficiency in active power generation will always manifest. This mismatch normally results in frequency fluctuation which could culminate in system instability [1] . The load of the system may change gradually or suddenly. Sudden changes of load may be due to quick switching operations or sudden faults followed by tripping of lines, circuit breaker or load. Dynamic stability studies the system for a period of 4-10 seconds following a large disturbance such as a short circuit or loss of generation or loss of load because it leads to serious threat to system security and creates very difficult operating conditions [7].

The transmission system in Nigeria is characterized by several outages which may lead to disruption in the lives of the citizenry [2]. The Nigerian National Grid NNG has been characterized by so many constraints. These include ageing of transmission line [6], long transmission line lengths and lack of redundancy within the system. In addition to these, inadequacy in hydroelectric plants particularly during the dry season and vandalisation of electricity equipment are other challenges facing NNG [3].

This paper presents the stability of NNG with reference to the critical bus within the system. In section 2, brief description of the NNG network is presented. Section 3 gives the modelling and performance analysis of the system under study. The simulation results and analysis are presented in section 4. The results obtained are discussed in section 5; while the study is concluded in section 6.

Figure 1 shows the one-line diagram of a Nigerian 330KV grid network. The single circuit, Benin-Onitsha-Alaoji 330KV transmission network, is the critical line within the NNG network. Thus, it has no level of redundancy due to it single nature circuit unlike the double circuit transmission lines that has some level of redundancy [1]. The Nigerian 330KV transmission grid system is characterized by high power losses due to the very long transmission lines and its radial structure. Because only some of the lines has long transmission compared to others Some of the lines with their associated long transmission line lengths include Benin to Ikeja-West (280 Km), Oshogbo to Benin (251 Km), Oshogbo to Jebba (249 Km), Jebba to Shiroro (244 Km) Birnin-Kebbi to Kainji 310 Km (310km), Jos to Gombe (265 Km), Kaduna to Kano (230 Km). There could also be power loss along medium transmission lines such as Benin to Onitsha (137 Km), Onitsha to Alaoji (138 Km) [1]. Hence, it could therefore be concluded that the sensitivity of the Benin bus in the NNG cannot be overemphasized because of its connectivity to the northern, eastern, southern and western part of the country thereby making the bus a very sensitive bus in the grid as shown in figure 1. Thus, any fault along the bus could cause island formation and hence bring the entire grid to a total black out. 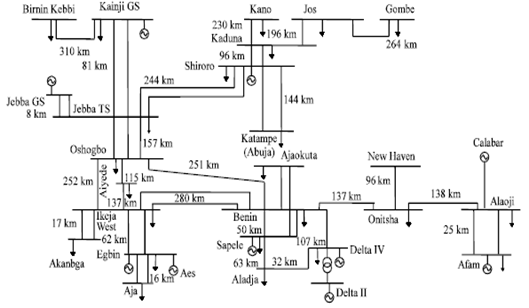 Benin-Onitsha-Alaoji is a single circuit 330-kV transmission line. Therefore, faults along this line shall cause instability in the grid. In the case of a double circuit, load demand during fault could be served temporarily by the other circuit. A careful study of figure 1 shows that the Benin bus connects the Southern, Western, Eastern and Northern parts of NNG network. This connectivity thus makes the bus to be sensitive, and therefore prone to faults and voltage collapse of NNG system. Hence, there is the need for the stability assessment of the grid with respect to Benin bus. Table 1 shows the connection of Benin bus to other buses within NNG and their associated line lengths, resistances and reactances in per unit [8].

Many voltage collapses and faults have been experience and recorded by NNG. For instance, from the years 2009 to 2010, about 19.8% of the total voltage collapse is attributed to fault on Benin bus which is an indication that the bus is critical and needs to be studied [1]. Because this is a percentage value and could not possibly be compared with a simulated one. Also the scope of the work is more on analysis while future work will be carried out with respect to comparism. 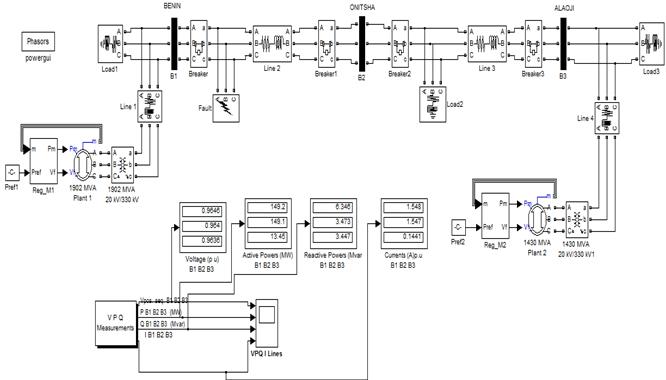 The steady state simulation is performed to determine the normal power-flow of the network and its operating characteristics such as voltages, currents and power at the various buses. The power generated by two generating plants is transmitted to the lines serving the loads connected to the three buses, at B1 136 MW and 84MVAR, B2 236MW and 146MVAR, and 248MW and 153MVAR. The model simulation reached its steady state in 5s with the fault breaker in off-mode. The result obtained from the steady state simulation is tabulated in table 2. Figure 3 shows the steady-state waveform for voltages, currents, active and reactive power at the various buses.

The vertical axis values are already shown in their various simulated result hence the values indicated here is the range that was used in the simulation. The yellow colur is for Bus 1 while the red and blue colour represents buses 2 and 3 respectively. In cases where not just the yellow lines are clearly seen but also other lines, it implies that two different buses may be having a simulated results that are approximately the same. Hence, the visible line in such cases are used to show the two different buses. For instance, the blue line in this case represents the simulated values of 1.5480&1.5470 for buses 1 and 2 with

Table 1. Line-data for the circuit under consideration

The dynamic state simulation is carried out with the same model putting the fault breaker into On-mode to simulate different fault conditions at the three buses. The faults simulated are single line-to-ground fault, double line-to-ground fault, three-phase-to-ground fault, line-to-line short circuit fault, and sudden drop out of generating plant. The various faults conditions simulated are used to ascertain and analysed the system collapse. The simulation time was set to 20s; the fault breaker was initiated at 5s and last for 2s Based on the mathematical solver used, the 20s helps us to get the best overview of the system anything short or less will not yield a desirable result before the fault is cleared by the circuit breakers. The automatic reclosure of the lines is initiated after 5s when the fault has been cleared.

The simulation results of the steady state and dynamic faults analysis of Benin-Onitsha-Alaoji 330kV transmission line within NNG have been considered.燘ased on the steady-state simulation results, the highest fault current was observed in the three-phase-to-ground fault simulated in bus 1 while the single line-to-ground fault simulated into bus 1 has a voltage value close to the normal operating condition. The power-flow and the voltage for the line-to-line fault were within the normal condition of 330 KV while the lowest voltage profile was observed in the three-phase-to-ground fault. The three phase-to-ground faults into buses 1, 2 and 3 respectively have been simulated and their respective waveforms presented.

Based on the simulation results, it can thus be concluded when compared with the normal operating conditions that the Benin bus needs to be compensated. Furthermore, more substations need to be built so as to reduce the heavily loaded Benin bus. The execution of the third Benin-Onitsha double circuit transmission line should be expedited as these will improve on its active and reactive power flow, as well as improving on the sine wave generated.

This paper has studied and analysed various dynamic faults along the transmission line of NNG with reference to Benin-Onitsha-Alaoji 330-kV transmission line. The simulation and analysis of the equivalent circuit for the network considered using Matlab/Simulink model has been presented.

Based on the results obtained, it is observed that the Benin bus is more prone to faults and hence, it can be concluded that the line should be compensated for the stability and hence security of the system. This paper researches on the needs to improve on the stability of the various buses in the NNG using the Benin bus as a reference bus. Matlab/Simulink model for the case study is presented. Both the steady-state and dynamic behaviour of the network of interest are analysed. Various types of fault for the system are simulated and analysed.