Combined heat and power unit (CHPU) known as cogeneration has the ability of creating simultaneous generation of two types of energy: useful heat and electricity. It improves efficiency and therefore, is more environmental friendly [1]. It also reduces the generation cost between 10 and 40% [2]. In Thermal Units, all the thermal energy is not converted into electricity and large quantities of energy are wasted in the form of heat [3]. CHPU uses the heat and can potentially achieve the energy conversion efficiency of up to 80% [4]. This means that less fuel needs to be consumed to produce the same amount of useful energy.

In order to utilize the CHPUs more efficiently, economic dispatch must be applied to achieve their optimal combination of power and heat output subject to system equality and inequality operational constraints. Hence, the combined heat and power economic dispatch (CHPED) problem is formulated as an optimization problem [5]. A practical CHPED problem should include ramp rate limits, spinning reserve to overcome the sudden fault in the system and joint characteristic of electricity power heat which makes finding the optimal dispatching a challenging problem[6,7].

In the recent researches, global optimization techniques like genetic algorithms (GA) [8], harmony search algorithm (HAS) [9], and particle swarm optimization (PSO) [10], have been applied for optimal tuning of CHPED based restructure schemes. These evolutionary algorithms are heuristic population-based search procedures that incorporate random variation and selection operators. Although, these methods seem to be good methods for the solution of CHPED parameter optimization problem, they have degraded efficiency to obtain global optimum solution when the system has a highly epistatic objective function (i.e. where parameters being optimized are highly correlated), and number of parameters to be optimized are large, then. In order to overcome these drawbacks, different modifications of particle swarm optimization approach are proposed for solution of the CHPED problem [10,11,12].

The proposed CHPED problem is an optimization problem like economic load dispatch (ELD) problem, but it considers some types of production units such as pure heat units, cogenerating combined heat and power units. The cogeneration is a role to produce heat and power with feasible operation region according to Figure 1, where the boundary curve ABCDEF determines the feasible region. Along the boundary there is a trade-off between power generation and heat production delivered by the unit. It can be seen that along the curve AB the unit reaches maximum output power. On the contrary, the unit reaches maximum heat production along the curve CD. Therefore, power generation limits of cogeneration units are determined by combined functions incorporating the unit heat production, and vice versa [9]. Mathematically, the problem is formulated as: 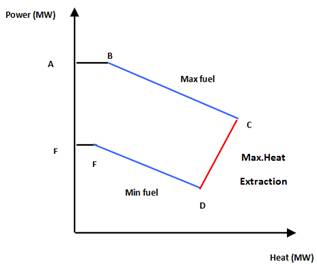 np, nc are the numbers of the of conventional power units and cogeneration units, respectively.

pmin and pmax are the unit power capacity limits,

hmin and hmax are the cogeneration heat capacity limits.

- In addition, up and down ramp rate limits can be formulated as:

Pi is the output power at time 't', Pio is the initial output power, URi & DRi are the ramp up & down rate limits of the ith generator, respectively.

PSO is a population based optimization algorithm [15]. The population is called 'swarm'. Each potential solution is called particle which is given a random velocity and is flown through the solution space searching for the optimal position. Each particle keeps track of its previous best position, called pbest, and corresponding fitness in its memory. The best value of pbest is called gbest, which is the best position discovered by the swarm. If promising new solution is discovered by a particle then all other particles will move closer to it. Based on PSO concept, mathematical equations for the searching process are:

are the position of dth dimension (variable) of the ith particle at kth and (k+l)th iteration,

For particle swarm optimization with constriction factor approach (PSOCFA), the velocity of Equation (8) is manipulated as:

In this approach, the velocity is changed according to the following:

The process of the four approaches can be summarized as follows:

Step 1: The particles are randomly generated between the operating limits.

Step 3: The best value of pbest(s) is represented as gbest.

Step4: The particles' velocities and positions are updated using velocity and position updating equations corresponding to each approach.

Step 7: The particle that generates the latest gbest yields the optimal variables. [16]

Testing and monitoring programs are developed to find out where the efficiency problems are and what improvements can be made. The objective of these performance tests is to provide uniform test methods to obtain the best points of the units operation (optimal power with maximum efficiency). In addition, they help determine the thermal performance and electrical output (capacity or efficiency) of heat cycle for electric power plants and cogeneration facilities according to the specifications [17,18]. Twelve generation units (two steam units of Ayoun Mousa steam power plant, four gas units of West Damietta power plant and six cogeneration units of Damietta combined power plant) with data given in Appendix A are used in this study in order to assess the performance of the four approaches.

In this study, the performance tests are applied to measure the actual power output and the fuel consumption in every point tests to achieve different curves such as input/ output, incremental heat rate and heat rate curves for the 12 units. It has been proved that the intersection of both the hate rate and incremental heat rate curves occurs at the minimum heat rate value. The results of the performance tests for the 12 units are as follow: 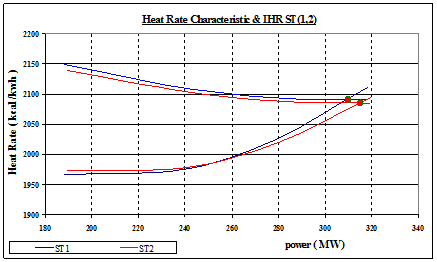 The fuel costs of the two steam units according to Figure 2 can be expressed as: 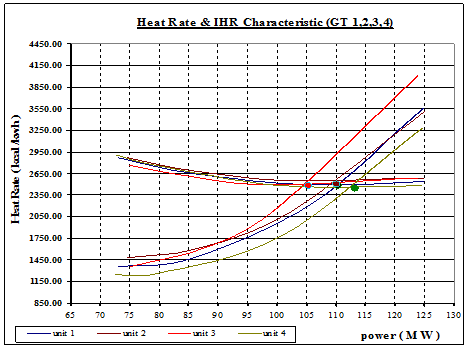 From Figure 3 the fuel costs of the four gas units can be expressed as:

where, PGTi is the power limits of gas units. 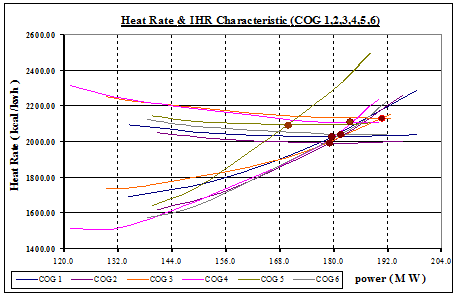 The combined heat and power cost equation is expressed as follow:

where, a, b, c, d, e, and f are the combined heat and power cost equation coefficients and J is the number of cogeneration units.

Figure 4 shows the heat rate and incremental heat rate characteristics for cogeneration units. From this figure, the combined heat and cost is expressed as: 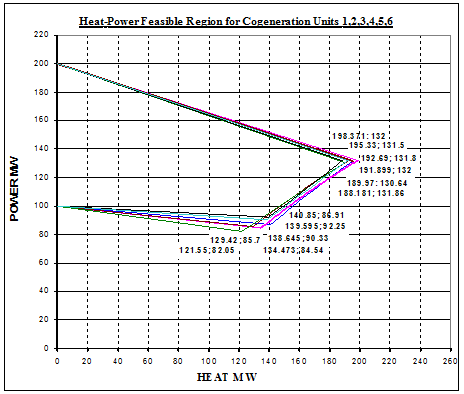 Figure 5 shows heat-power feasible region for the six cogeneration units. The maximum and minimum fuel is 200 and 100 MW; respectively.

CHPED problem is solved using the PSO, PSOCFA, PSOIWA and PSOCFIWA approaches. To assess the units efficiency when applying each approach, two case-study are proposed. First, the approaches are tested with a load demand equals to 2148 MW which is the reference of the performance test for the twelve generating units. Second, they are applied to a daily load curve. On both cases, twelve units (two steam, four gas and six cogeneration units) are used. For PSO simulation, the population size = 50, and the maximum iteration = 600.

Figure 6 shows the convergence behavior of the PSO and other approaches for 12 generating units at load 2148 MW. It is shown that PSOIW approach can reach the best solution with minimum cost. Table 1 shows a comparison between the results of the four approaches with those obtained from the performance test. From these results, it can be seen that the results of PSOIWA approach provides lower total operation cost at less computation time compared with those obtained from the other three approaches. Therefore, PSOIWA is more effective in providing better solutions and shows a more robust performance. 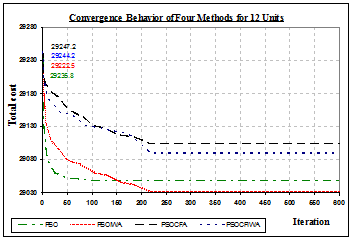 Figure 6. The convergence behavior of the PSO and other methods for 12 units at load 2148MW.

Table 1. Comparison results between the PSO, PSOCFA, PSOIWA, and PSOCFIWA approaches with those of performance test. 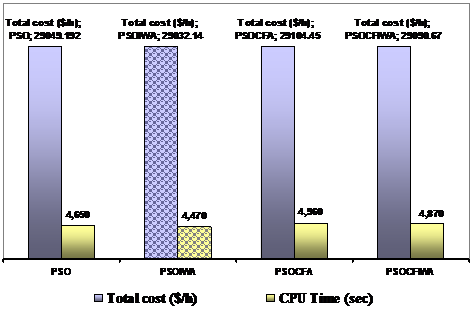 Figure 7. The comparison between PSO and other methods for case 1.

Figure 8 shows the daily load curve used in the study. The four approaches are applied to the twelve units and Figure 9 shows the comparison between the results. It is evident that the PSOIWA approach has the advantage of cost saving that is around 1.00058, 1.00249 and 1.002016 times from PSO, PSOCFA and PSOCFIWA, respectively. 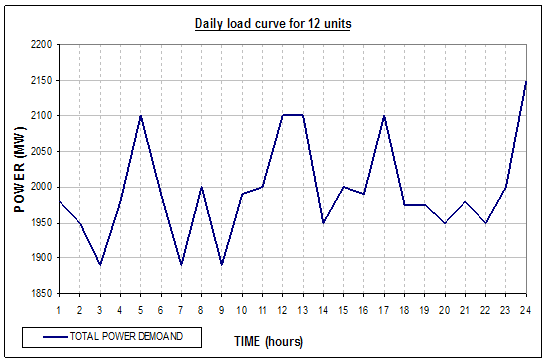 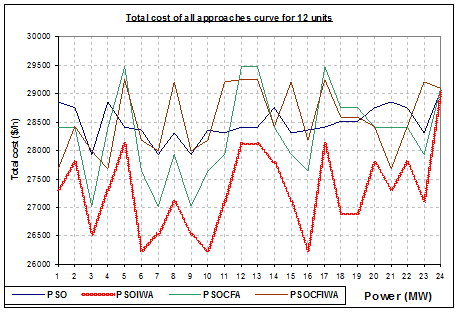 Figure 9. The total cost for 12 generation units of all approaches for case 2.

Comparative study based on PSO, PSOCFA, PSOIWA and PSOCFIWA approaches applied to solve CHPED problem has been presented. The approaches are tested on 12 generation units (two steam, four gas and six cogeneration units) taking into consideration the system and units constraints. The results of the four approaches are compared with those obtained using existing performance testing method. From the results, it is clear that PSOIWA approach is more effective than other approaches discussed. This gives the best global optimum solution with less computation time than the PSO, PSOCFA and PSOCFIWA techniques.