Although the automotive industry has been using HFC134a (R134a) as a standard replacement for CFC12 since 1994 for its zero ozone depletion potential (ODP), this refrigerant has a very high Global Warming Potential (GWP = 1430). HFC134a contributes to global warming because of its fluorine content. Ozone depletion and total climate change depends on both global warming potential and ozone depletion potential. So, there is a need to find out alternatives of R134a under Kyoto protocol and Montreal protocol. The European Union issued a directive requiring for all car manufacturers to begin using a new refrigerant with a global warming potential (GWP) of less than 150 on all cars built for sale in the European Union by 2017, all cars assembled for sale in the European Union must be charged with an alternative refrigerant of R134a.

Over the last several years, much research and development effort has been focused on potential refrigerants possessing low Global Warming Potentials (GWPs). The evaluation of an automotive air conditioning system of R134a with a variable capacity compressor was studied by J.M. Saiz Jabardo, et al,[1]. They developed a computer simulation model which includes a variable capacity compressor and a thermostatic expansion valve in addition to the evaporator and micro channel parallel flow condenser. Effects of design parameters on system performance of compressor speed, return air to the evaporator and condensing air temperatures have been experimentally simulated by means of developed model.

Jitendra Verma et al, [3] carried out a review of alternative to R134a refrigerant. They stated that, R152a is almost a straight drop-in substitute for R134a. The molecule is similar to R134a except that two hydrogen atoms are substituted for two fluorine atoms. It has similar operating characteristics to R134a but cools even better. An environmental benefit of R152a is that it has a global warming rating of 10 times less than R134a. Ghodbane, [4] simulated the performance of automotive air conditioning systems with several hydrocarbons. He determined that the systems with R152a and R270 yield a better performance than the one with R134a. In addition, a comparative assessment of the performance of a secondary loop system using these refrigerants was provided

E. Navarro, et al, [5] presented a comparative study between R1234yf, R134a and R290 for an open piston compressor of automotive air conditioning at different operating conditions. The test matrix comprised two compressor speeds, evaporation temperatures and condensation temperatures. They concluded that R290 has shown a significant improvement in compressor and volumetric efficiencies while R1234yf improves its efficiencies compared to R134a for pressure ratios higher than 8.

J. Navarro-Esbrı, et al, [6] carried out an experimental analysis of R1234yf as a drop-in replacement for R134a in a vapor compression system. The experimental tests were carried out varying the condensing temperature, the evaporating temperature, the superheating degree, the compressor speed, and the internal heat exchanger use. Comparisons are made taking refrigerant R134a as baseline and the results show that the cooling capacity obtained with R1234yf is about 9% lower than that obtained with R134a. Claudio Zilio, et al, [7] studied experimentally an automotive air conditioning system equipped with variable displacement compressor. They concluded that, the R1234yf systems present lower performance than the R134a system at a given cooling capacity. Yohan Lee and Dongsoo Jung, [8] carried out a brief performance comparison of R1234yf and R134a in a bench tester for automobile applications. They concluded that the coefficient of performance and cooling capacity of R1234yf were 2.7% and 4.0% lower than that of R134a respectively.

In the present study, the thermal performance of R134a automotive air conditioning is carried out experimentally and theoretically. The study is assessed over wider range of compressor speed, condensing temperature and evaporating temperature. This study is extended to cover possible alternatives of R134a with low GWP of 150 or less according to Europe union recommendation. The low Global Warming Potential GWP refrigerants of hydrofluorocarbon- HFC-152a (R152a), and a very low GWP refrigerant of hydrofluoro-olefins of HFO-1234yf (R1234yf) and HFO-1234ze (R1234ze) are concerned in this investigation. The properties of these Refrigerants are listed in table (1). The possibility of using R152a, R1234yf, and R1234ze, as alternatives to R134a in automotive air conditioning has been investigated using Engineering Equation Solver (EES, 2013). This investigation is done with standard parameters such as cooling capacity, compressor power, coefficient of performance (COP), pressure ratio and condenser heat load.

The experimental setup of automotive air conditioning system is shown in Figs. (1-a, 1-b) which is consists of R134a refrigeration system with variable speed compressor, condenser, thermostatic expansion valve and evaporator. The compressor is belt driven by a three-phase 1.5 kW electric motor energized through a frequency inverter, which allows the operation of the compressors at the required speed. It contains auxiliary equipment of a liquid receiver/filter-drier, flowmeter, and thermostat. 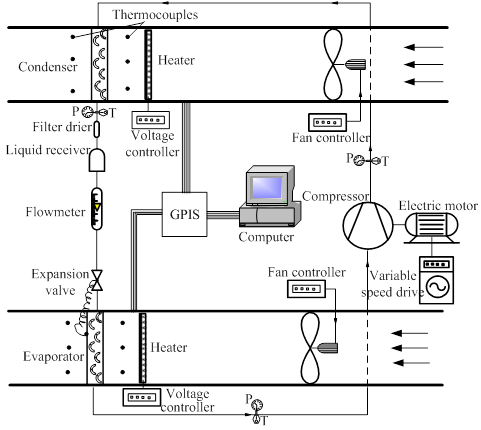 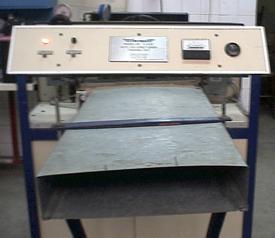 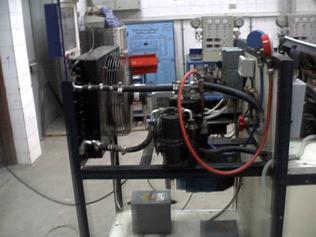 Fig. (1b). Photographs of the experimental test rig.

The uncertainties of the calculated experimental parameters are given in Table 2.

The refrigeration pressure-enthalpy diagram of the automotive air conditioning cycle is illustrated in Fig. (2). Thermodynamically, The cooling capacity (Qeva) is given by,[11]

The power required to drive the compressor is given by:

Actual specific enthalpy of the superheated vapor refrigerant at the compressor outlet (h2) can be calculated as follows: 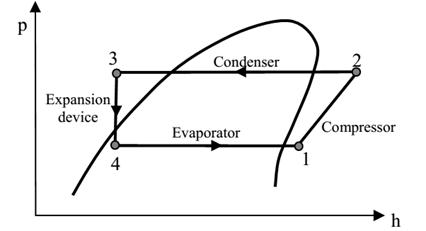 Condenser heat load can be written as;

The coefficient of performance (COP) is defined as the ratio of the cooling capacity to the compressor power, i.e.

Pressure ratio (PR) is defined as the ratio between condenser and evaporator pressures in which they depend mainly on the condensation and evaporation temperatures, respectively, 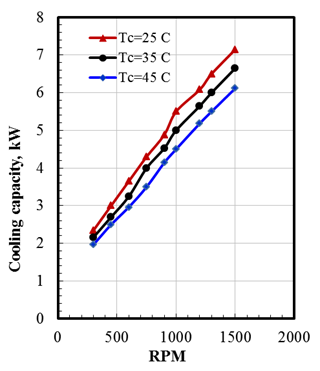 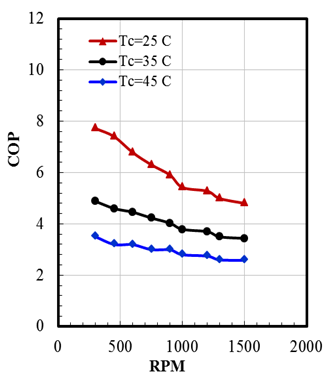 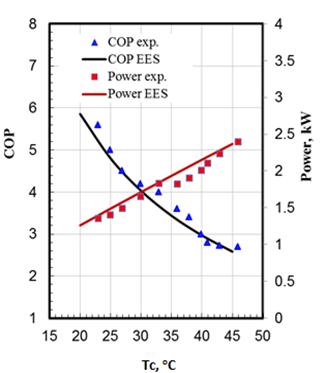 Fig. (5). Validation of experimental and theoretical results of R134a  for COP and input power. 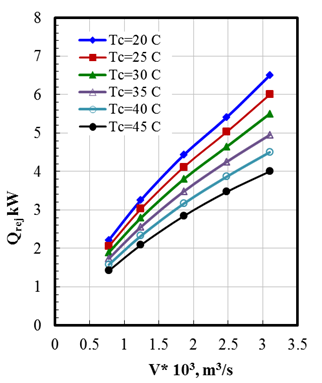 The analysis of the automotive air conditioning refrigeration cycle is extended using Engineering Equation Solver (EES, 2013) in order to study a wide range of design parameters in addition to a study the performance of low Global Warming Potential (GWP) alternatives refrigerants as low as 150 according to EU recommendation. Validation between the experimental and theoretical (EES) results is needed. Figure (5) shows the COP and input power validation of the theoretical EES results with the present experimental results. The results show that simulated EES results are comparable to the experimental results. 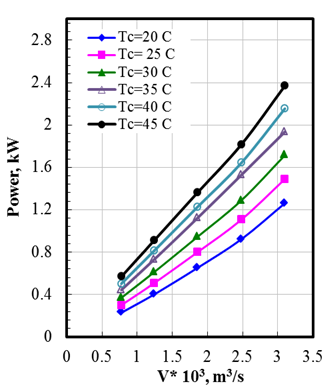 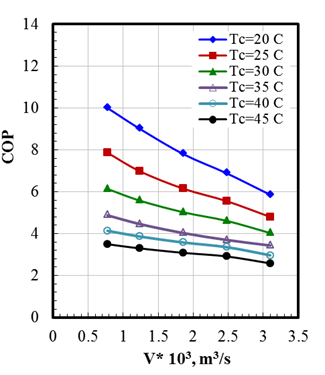 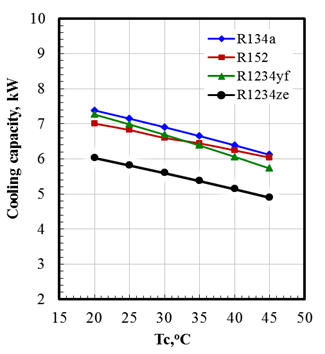 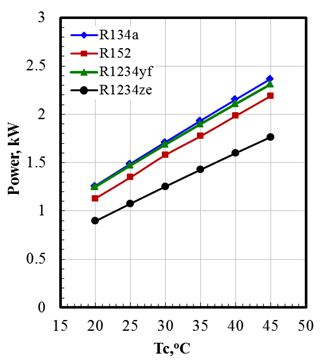 The performance of the low GWP refrigerants of R152a, R1234yf and R1234ze are stated in this section in which the representations of cooling capacity, compressor power, pressure ratio, and COP with the refrigerant volume flow rate are shown in Figs. (13 to 16) for a typical evaporation and condensing temperatures of 10oC and 35oC respectively. When the change in car speed is occurred which is due to change of fuel consumption, this led to a change in compressor RPM and hence variation in refrigerant flow rate is achieved. As the refrigerant flow rate increase, the cooling capacity, compressor power and pressure ratio increase also. The pressure ratio of R134a is higher that of R152a, R1234yf, R1234ze by 2%, 7.3%, 4.4% respectively. It can be seen that the R152a has a higher COP and lower values of pressure ratio and compressor input power. 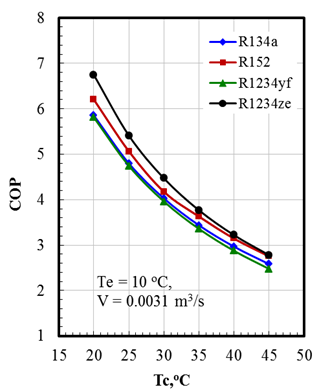 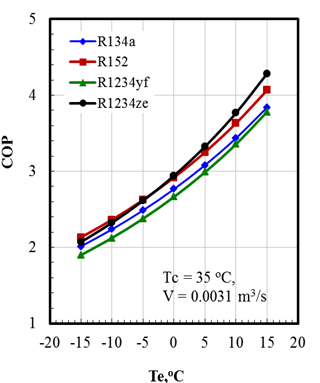 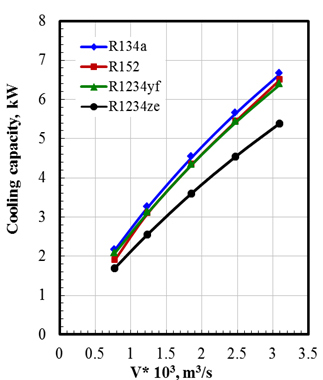 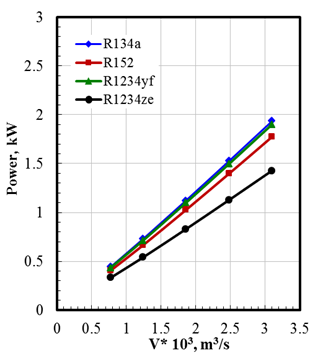 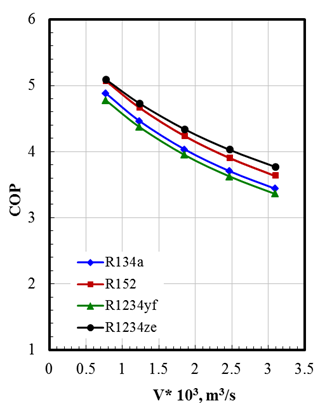 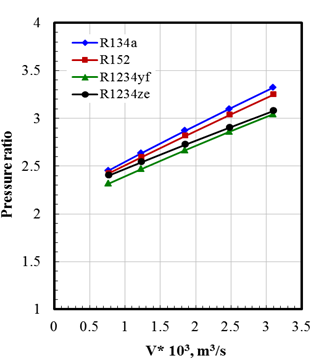 The thermal performance of R134a automotive air conditioning is carried out experimentally and theoretically. The performance of R134a alternatives (R152a, R1234yf, and R1234ze) which are characterized by low GWP of less than 150 is presented. The study is assessed over wider range of compressor speed, condensing temperature and evaporating temperature. This investigation is done with standard parameters such as cooling capacity, compressor power, coefficient of performance, pressure ratio and condenser heat load and the main conclusion are;

• The increase in compressor speed (RPM) produces a lower values of COP for all values of condensing temperature.

• For all values of condensing and evaporating temperature, the highest coefficient of performance is obtained for R1234ze among all investigated refrigerants.