Abstract: The energy efficiency of gas-burned boilers in space heating systems is sensitive to how the boiler is controlled. This study is aimed to investigate how the overall energy performance of a heating system can be optimized using best boiler control scheme. This is to be achieved through experimental studies and simulation studies. This paper presents the latter. A simplified boiler is proposed and integrated in a heating system modeling platform for the simulation study. The results show that the boiler in a heating system should be controlled according to the heating load in order to achieve the highest long-term energy efficiency while maintaining desired comfort.

In common with many other types of building services equipment, boilers in heating systems are often considerably oversized in order to provide a substantial margin of capacity [1] [2] [3] [4]. As a result, most boilers can generate sufficient heating capacity but often do so inefficiently especially when they are operated under part-load [5] and controlled by conventional boiler controllers, such as thermostats and weather compensators [6]. There are a broad range of boiler controllers used in current practice to maintain a satisfactory performance of heating systems. A conventional weather compensator changes the set-point of water temperature according to the external temperature such that the system can be operated at lower water temperature when the heating load is low [6]. Liao and Parand developed a boiler controller that can measure the heating load and accordingly determine the optimal water temperature at which the boiler efficiency can be maximized whilst sufficient heat can be delivered to the building [5]. Liao and Dexter developed a novel boiler controller, referred to as Inferential Control Scheme (ICS), that varies the water temperature according to an estimate of the average air temperature in the building [7] [8] [9] [10] [11]. One of energy saving strategies employed by these boiler controllers is to maximize the energy efficiency of the boilers through varying water temperature according to load or optimizing the mixture of oxygen and fuel, in additional to minimizing the heat loss throughout the heat distribution system and avoiding the overheating in the controlled spaces. The scientific credibility of these control techniques relies on a good understanding on how the energy efficiency of boilers is influenced and can be optimized in both short-term and long-term.

It is well understood that there are at least three definitions of boiler efficiency:

• Steady-state efficiency: how efficiently the heat is transferred from the combustion gases to the water when the boiler is running under full load.

• Seasonal efficiency: how efficiently the fuel is used by the boiler over the entire season.

These definitions are related with each other and equally important. However the seasonal efficiency is most important because it determines how much fuel is consumed over the entire heating season.

A boiler continues to lose heat when it is turned off as follows:

• Radiation through the boiler shell or jacket.

• Convection between the boiler and the air that is drawn by the chimney draft and continues to flow through the boiler.

The more often the boiler cycles, the greater the downtime losses and the lower the seasonal efficiency are.

Anglesio gives a relationship between the seasonal efficiency (

) is defined as the ratio of produced power (

) to the maximum power (

An experimental study on boiler energy efficiency has been reported in [15]. This paper presents a simulation study.

The relevant parameters are: (1) The total thermal capacity of the inner shell (Cis), the outer shell (Cos), the water content (CW), and the insulation (Ci).

Cis, Cos, CW and Ci are calculated from the technical data of the boiler [7]. The value of K1, K2, K3, K4 and K5 are determined using experimental data through a commissioning procedure [7]. Then a different set of experimental data is used to validate the model. Figure 2 shows the validation results. The results show that the boiler model can accurately simulate the dynamics of the boiler. 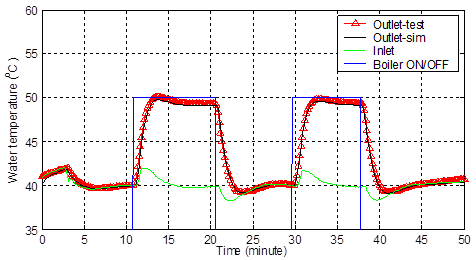 Figure 2 (a). Validation of the boiler model (constant inlet temperature). 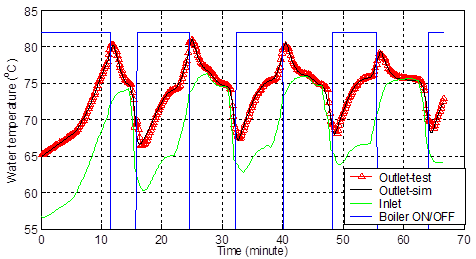 Figure 2 (b). Validation of the boiler model (variable inlet temperature). 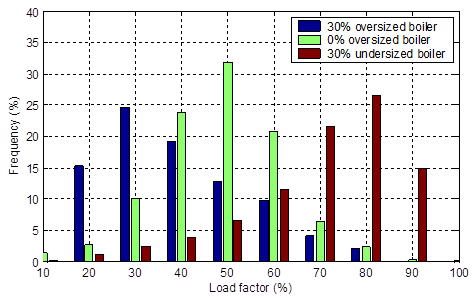 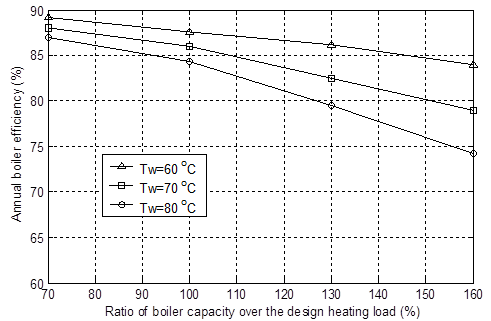 The boiler model is integrated with a heating system simulator to investigate the long-term, or annual, boiler efficiency under different operating conditions.

4. Strategies to Optimize Energy Efficiency of Boilers in Heating Systems

Both simulation and experimental results show that the boilers in heating systems can be operated more efficiently if the water temperature is reduced. However, in order to produce and deliver sufficient heating capacity to the building, the supply water temperature must be maintained above a certain minimum level, which varies with the changing weather and the use of the building. Therefore the best strategy to maintain high energy efficiency for long-term is based on the ability to detect the minimum heating requirement. We have investigated the performance of some boiler control techniques in actual heating systems over the last ten years. These control techniques are designed to optimize the operation of the boilers in space heating systems for the best long-term energy efficiency. The objective of this field study is to find out if this has been actually achieved. The result is summarized as follows:

It was believed that this compensator was able to stop excess heat loss due to open windows. Being a time-independent controller, this compensator strongly relies on good design of the heating system and accurate hydraulic balancing because it attempts to match the heat input into the system to the steady-state heating load. The control performance of this compensator is very sensitive to the commissioning, which often require extensive monitoring. Dexter investigated this problem and developed a self-adaptive weather compensator [18], which relies on on-line measurement of both the external and indoor temperature. Yet the commissioning has been proven to be a very difficult, if not impossible, procedure in practice. As a result, very few of this kind of compensator are commissioned properly [5].

A weather compensator does not consider the impact of the solar radiation, infiltration, internal heat gain, and variation of the desired room temperature on the heating load. All these elements are taken into account by a heating load compensator, which can estimate the heating load and accordingly determine the optimal water temperature at which the efficiency of the boiler is maximized and sufficient heating capacity is produced.

In practice, the overall performance of the ICS controller is sensitive to the parameters of the PI algorithm used to determine the water temperature set-point according to the desired and estimated average room temperature. The Model-based predictive ICS (MPICS) was developed to resolve this problem. It is a more robust version of ICS, meaning that it is much easier to commission and less sensitive to the varying operating conditions.

The following conclusions can be drawn:

• The energy efficiency of boilers in heating systems is influenced by a number of factors, including the boiler control strategy, the water temperature and the load factor.

• The energy efficiency of boilers declines if the water temperature increases.

• The lower the load factor, the higher the potential for improving the boiler efficiency by reducing the water temperature.

• There are a number of boiler control schemes used in current practice to maintain high long-term energy efficiency by changing the water temperature set-point according to an estimation of either the heating load or the average room temperature in the building.

Currently the following tasks are being carried out to further investigate the problem:

• Investigating the energy efficiency of boilers in a broader range of heating systems, such as the systems with different terminal devices or distribution systems.

• Improving the accuracy of the boiler model.

• Developing a method and a system to test the performance of boiler controllers.

The work presented in this paper was partially funded by FBE, UK (Foundation for the Built Environment). And the preparation of this paper is supported by Ryerson University, Canada.