Abstract: The thermal behaviour for the DTA, DSC and TGA measurements have been carried on the solid phase transformation for the binary eutectic mixture of 60 wt% sodium nitrate (NaNO3) and 40 wt% potassium nitrate (KNO3). Thermal energy storage materials are important for the technology that is applied to reduce cost solar thermal power generation. The NaNO3-KNO3 system is a binary inorganic salt system and it is one of the most promising thermal storage materials. The methods are based on the principle that a change in the physical state of a material is accompanied by the liberation or absorption of heat. The various techniques of thermal analysis are designed for the determination of the enthalpy accompanying the changes in the physical properties of the material. The thermal measurements showed a reversible phase transition at ~114°C during heating process and at ~108°C during cooling process. It has been shown also the presence of thermal hysteresis during this transformation with a magnitude of the hysteresis temperature ~8°C. The thermogravimetery analysis (TGA) indicated that the eutectic system (Na0.6K0.4)NO3 is thermally stable up to the melting point at ≅225°C. This means that the sample under study is structurally stable. DTA measurements were also carried out for the sample at different heating rates of (2, 5, 10, 15 and 20°C/min). Some thermal parameters such as the transition point, enthalpy and the activation energy for the transformation process were estimated at each heating rate. It has been also shown that these parameters are affected by the heating rate. The noticeable effect of heating rate on the thermal parameters means that the heating rate is a main factor to change the thermal interaction potential of the Na and K atoms around the nitrate group (NO3-) during the phase conversion for the eutectic (Na0.6K0.4)NO3 system.

Thermal energy storage systems are a key technology for reduced cost solar thermal power generation [1,2]. Also, they are one possibility for solar thermal power plants to compensate temporary divergences between the availability of sunlight and the demand for electricity. This high temperature application requires storage operation above 100°C. Therefore, thermal energy storage at high temperature (>120°C) is an efficient way for energy saving in industrial process. Several mixtures of alkali nitrates and nitrites have been used as a heat transfer medium because of its low cost and good compatibility with common structural materials [3]. Additionally, significant attention has been given to using salts as a phase change storage media (using encapsulation and otherwise) [4]. The NaNO3-KNO3 system is one of the most extensively investigated binary inorganic salt systems [3,4]. Mixture of NaN03 and KN03 is promising from the viewpoints of cost and thermal stability and can be used for sensible heat storage. The application of this mixed salt to thermal storage, for load leveling, and for solar thermal electric power generation were postulated to be promising [7]. The effect of the thermal history has been investigated by DSC and X-ray diffraction and the enthalpy change has been measured for quenched and annealed samples of 50 mole% NaN03-50 mole% KN03 by a high-temperature calorimeter of the twin type [7, 8]. A binary mixture of 30 wt.% potassium nitrate (KNO3) and 70 wt.% sodium nitrate (NaNO3) has been studied by Martin et al [8]. The measurement systems include a differential scanning calorimeter, a melting point apparatus, a custom-built adiabatic calorimeter and a lab-scale storage unit. Recently, salt has been considered for use in trough and linear fresnel based solar collectors and has been shown to offer a reduction in levelized cost of energy as well as increased availability [10]. The phase diagram of NaNO3-KNO3 is determined by DSC and high-temperature x-ray diffractometry [11] Thermal and mechanical properties of three representative salts for use in thermal storage systems have been evaluated as a function of temperature, thermal conductivity, specific heat, and the apparent heat of fusion were obtained using a differential scanning calorimeter [9]. Using additives such as graphite to NaNO3-KNO3 mixture leads to insignificant thermal conductivity improvement in overall application and hence the thermo physical properties for energy storage will be improved [10]. The system KNO3-NaNO3 was also discussed in detail in terms of their thermo-physical properties in the liquid and solid phase [11]. Recent measurements of the electrical conductivity of the solidified KNO3-NaNO3 50: 50 mole% composition and of the melting enthalpy have suggested that the solid consists of alternating areas of sodium nitrate-rich and potassium nitrate-rich composition [12]. Also, a detailed calorimetric study of the NaNO3/KNO3 phase behaviour as a function of cation composition was presented [13].

In spite of the interest, no or very few examples of commercial high temperature thermal energy storage were realized and the KNO3-NaNO3 system is still has the attention of researchers. Therefore, we studied in this work the thermal properties of 40 wt.% potassium nitrate (KNO3) and 60 wt.% sodium nitrate (NaNO3) by the measurements of DSC, DTA and TGA.

Chemically pure NaNO3 and KNO3, Aualar from BDH, were used as constituent compounds for the mixture (NaK)NO3 by the molecular ratio 60% NaNO3 and 40% KNO3. The binary system was formed by the pre-annealing of the pure nitrates up to 400°C in a muffle furnace for three hours. The mixture was then allowed to be equilibrated in air at 400°C before casting into a stainless steel mould to quench and solidify to form the eutectic system (Na0.6K0.4)NO3. Differential Scanning Calorimetry (DSC) and Differential Thermal Analysis (DTA) measurements were performed using a DSC-DTA apparatus (model Shimadzu DSC-50). However Thermogravimetry Analysis (TGA) was performed using TGA apparatus (model Shimadzu TGA-50). It was found that this eutectic system has a melting point of ≅225°C which is less than melting points of both NaNO3 and KNO3. The thermal measurements for the eutectic (Na0.6K0.4)NO3 system were carried out by using (DSC) during heating and cooling at rate of 10°C/min, (TGA) and Differential Thermal Analysis (DTA) at heating rates of 2, 5, 10, 15 and 20°C/min.

Differential Scanning calorimetry (DSC) technique is used in a wide range for the thermal investigation. Usually, a material such as (NaK)NO3 will show definite and characteristic effects on heating which relate to its nature, composition and history. These observations are informative about its properties. The program may involve heating or cooling at a fixed rate of temperature change, or holding the temperature constant, or any sequence of these. Differential techniques involve the measurements of a difference in the property between the sample and a reference material. Thermal analysis is now generally recognized as one of the basic analytical tools for characterizing the compounds. The nature of phase transitions even in complex compounds and their thermal stability is often studied by DTA and DSC. Endothermic or exothermic band may be due to chemical or physical or physical reaction. DTA and DSC are completely to each other. Both of them provide a rapid method for studying the thermal kinetics of the material under test.

DSC which is performed in the present work for the eutectic (Na0.6K0.4)NO3 samples was recorded during heating and cooling process. Various kinetic parameters controlling such phase transitions and thermal information are to be determined by such thermal analyses. 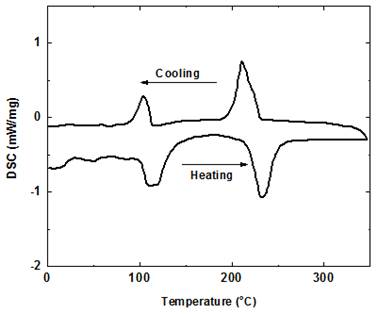 Figure 1. DSC thermogram record during heating and cooling of the eutectic system of (Na0.6K0.4)NO3 sample.

The thermogravimetry analysis (TGA) is basically quantitative in nature where the mass-changecan be accurately determined. This method is a useful technique for studying the ability of a substance to maintain its mass under a variety of conditions [17]. Figure 2 a, b show a high accurate thermal gravimetric analysis measurement for (Na0.6K0.4)NO3 sample during its phase transformation. It is note the analysis of this curve and its derivative that there is no nearly any mass loss in the temperature range (30 – 20°C) i.e. during the transformation process for this sample. This means that the (Na0.6K0.4)NO3 sample is structurally stable contributing to ant mass loss during the transformation process. It demonstrated also this transformation to have a thermal stability up to the melting point [18]. 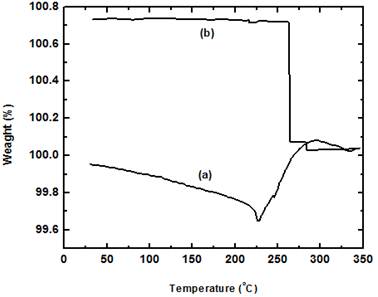 Figure 2. TGA analysis (TGA and derivative curves) for thermal stability of the phase transition for (Na0.6K0.4)NO3 sample. (a) TGA curve, (b) Derivative curve. 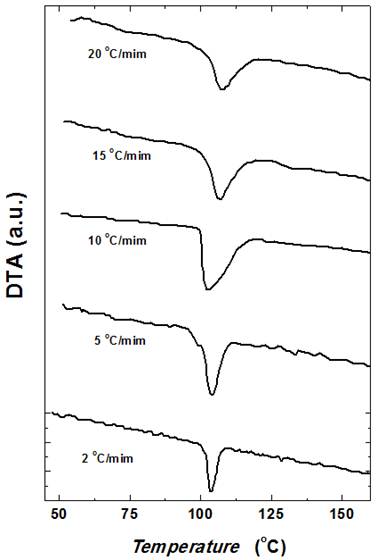 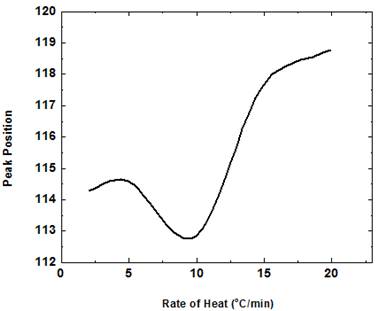 The effect of heating rate on the thermal characteristic behaviour can be clearly observed. This indicates to the presence of a certain dependence on the heating rate for the thermal phase-phase transformation of (NaK)NO3 sample which was detected by the DTA measurements. This means that the effect of heating rate is mainly associated with changes of the thermal interaction potential of Na+ and K+ ions around the (NO3-) group during the phase transformation. This leads to a change in both the transition point and the enthalpy for the (NaK)NO3 sample [20]. 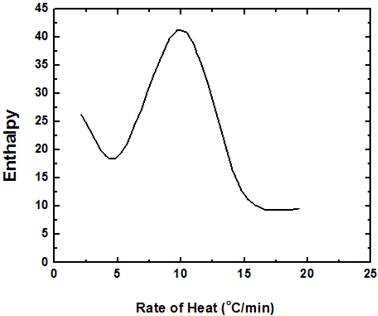 Table 1. The activation energy at different heating rate of the (NaK)NO3 sample.

A mixture (Na0.6K0.4)NO3 eutectic system of molecular ratio 60% NaNO3 and 40% KNO3 was prepared from chemically pure NaNO3 and KNO3. The various techniques of thermal analysis such as Differential Thermal Analysis (DTA), Differential Scanning calorimetry (DSC) and Thermogravimetry Analysis (TGA) were applied to study the thermal properties of the prepared mixture. The DSC measurements showed a thermal hysteresis during this transformation with a magnitude of the hysteresis temperature ~8°C. Where the measurements showed a reversible phase transition at ~114°C during heating process and at ~108°C during cooling process for the solid phase transformation for the eutectic (NaK)NO3 system. The thermogravimetery analysis (TGA) indicated and demonstrated the phase transition inside this eutectic system having thermal stability up to the melting point at ≅225°C indicating to the structural stability of the sample under study. It has been also shown from the DTA measurements that the thermal parameter such as the transition point, enthalpy and the activation energy for the transformation process are affected by the heating rate of (2, 5, 10, 15 and 20°C/min). The noticeable effect of heating rate on the thermal parameters means that the heating rate is a main factor to change the thermal interaction potential of the Na and K atoms around the nitrate group (NO3-) during the phase conversion for the eutectic (Na0.6K0.4)NO3 system.