Abstract: Wind energy is one of the most widely used renewable energy resources. Large amounts of research and resources are being spent today in order to harness the energy from wind effectively. Large wind turbines are erected at windy site and delivering satisfactory performance. Small wind turbines are erected in low wind regions and are in development stage. Research activities are increasing at a significant rate in the field of small wind turbines. World wind energy association forecast considerable development in this field. To face the wind directions, small wind turbines are using mechanical systems in the form of tail. The conventional tail changes the direction of the wind turbine to accommodate the variation of the incoming direction of winds. Quick and steady response is important as per change in wind directions. It has considerable effect on the wind turbine performance. The tails are having different shapes, but literature is not available about it. Different manufacturers used different tail shapes for their model, but the effect of tail shapes has not been studied yet. Hence, it is necessary to study the effect of tail shapes on the performance of wind turbine. This paper presents the effect of tail shapes on the performance of wind turbine. In this work three different tail shapes; rectangular, trapezoidal and triangular are considered. The yawing performance for these tail shapes using CFD analysis is carried out and presented in this paper.

Due to the increase in energy consumption and depletion of non renewable sources; there is need of clean renewable energy sources. Renewable energy devices such as wind turbines are playing a tremendous and significantly increasing role in the generation of electric power, in worldwide [1-4]. Countries in Europe and Asia are putting massive effort in the development of wind energy technology. At the end of 2013; the recorded small wind capacity installed worldwide has reached more than 755MW. This is nothing but the growth of more than 12% compared with 2012, when 678MW were registered. The technology of large wind turbines has been developed well; while small wind turbine technology is in development stage. The market for small wind turbine technology is encouraging in India also [2].

Generally, wind turbines, which are producing power in the range of 1-100kW, are called as small wind turbines. This definition of small wind turbines is found different for different countries [2]. Small wind turbines operating at low wind speeds regularly face the problem of yawing performance due to the uneven nature of wind.  Because of this uneven nature of wind, the rotor axis of a wind turbine rotor is usually not aligned with the wind [11]. Due to which the rotor is not capable of following the variability of wind and so spends most of its time in a yawed condition. The yawed rotor is less efficient than the non-yawed rotor and so it is important to assess the efficiency for purposes of energy production estimation. In order to ensure the extraction of maximum wind potential even at lower wind speeds, most of the small wind turbines point into the wind using a tail assembly [5-6]. 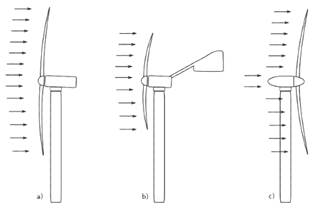 In order to know yawing performance of a micro wind turbine, it is necessary to determine the pressure distribution and forces acting on the surface of tail shape. The pressure and forces acting on the vane area were determined using Computational Fluid Dynamics. During this analysis, wind having 7m/s velocity and rotor with 350 rpm was considered. Pressure plots for 0,10,20,30 degree angle of inclination were obtained. This section presents various pressure plots of trapezoidal, rectangular, triangular tail shapes at different inclinations. The computational results of these tail shapes are presented in Figure. 2 to Figure 13. 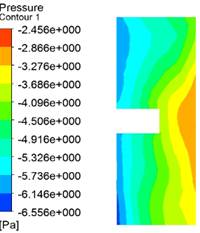 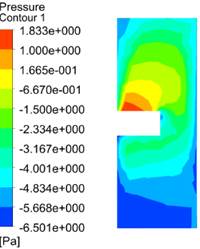 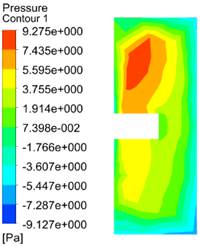 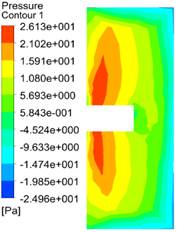 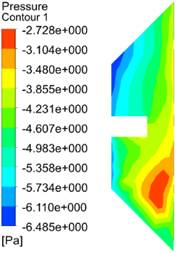 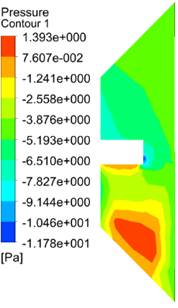 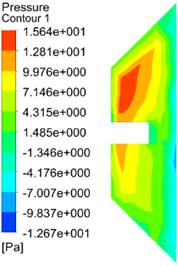 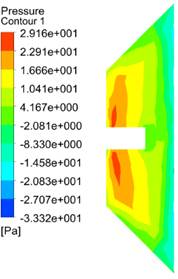 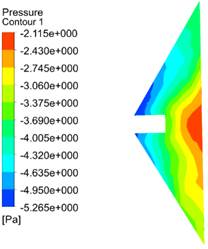 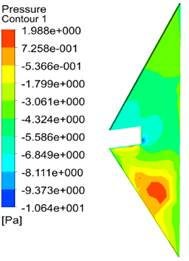 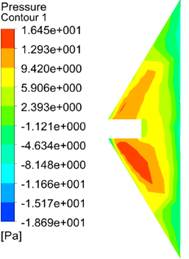 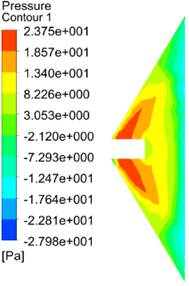 Three uniform micro wind turbines having different tail shapes of same area are modeled and analyzed successfully using CFD software. The results obtained from computational analysis are favorable for triangular shape. From which it is clear that yawing performance of triangular shape is better followed by trapezoidal and then rectangular shape. These results show that use of triangular tail shape will slightly improves performance of wind turbine compared to other two tail shape. It is also observed that as angle of inclination increases forces on tail shapes are also increases.