Abstract: In restructured Electrical Power network the transmission line gets congested by multiple transactions over the line. In such scenario the operator must analyze optimum value of ATC for said transaction. When the transactions between the transmission lines are carried out for a speciﬁc destination node/source node pair in a system, the Independent System operator (ISO) must calculate the available transfer capacity (ATC) of that node/source pair. This paper proposes a comprehensive approach to find out the optimized value of ATC for given transaction using Genetic Algorithm. With the help of Genetic algorithm transactions between pair of node can be generated randomly and can be used to calculate optimized value of ATC for each transaction. With the help of this method ISO can declare the value of transacted power from source to destination bus for optimum value of ATC. The objective function is to maximize the power flow capability of transmission line with safest transaction. The solution to the optimization problem gives the amount of accepted requests and available capability of transmission line that could result in a safe and reliable transmission system. The proposed method is applied to an IEEE 30 bus test system.

Many electrical power utilities, worldwide, have been forced to change their way of operation and business, from vertical integrated to unbundled open market structured [2]. The main aim of the restructured is to bring some form of deregulation or re-regulation in certain part of Electricity business sector in order to allow competition in wholesale and retail level. In addition, it is expected to provide choice and social benefit to customers. This can be specially observed in countries like UK, Sweden, Finland, Norway, US and some countries of South America [1]. The reasons for change have been many and have different over regions and countries. For developing countries, the main issues have been a high demand growth coupled with insufficient system management and irrational tariff policies. This has affected the availability of financial resources to support investments in improving generation and transmission capacities. In such circumstances, many utilities were forced to restructure their power sectors under pressure from international funding agencies.

In developed countries, on the other hand, the driving force has been to provide electricity at lower prices and offer them a greater choice in purchasing economic energy. The goal of changing the way of operation, i.e. re-regulation, or deregulation, as we say, is to enhance competition and bring consumers new choices and economic benefits.

The role of an Independent System Operator (ISO) [9] in a competitive market environment would be to facilitate the complete dispatch of the power that gets contracted among the market players. With the trend of an increasing number of bilateral contracts being signed for electricity market trades, the possibility of insufficient resources leading to network congestion [8] may be unavoidable. Whenever the physical or operational constraints in a power system become active, the system is said to be in a state of congestion [1,8,5].

In this scenario, congestion management (with ATC) becomes an important issue [3,4,7]. Real-time transmission congestion can be defined as the operating condition in which there is not enough transmission capability to implement all the traded transactions simultaneously due to some unexpected contingencies. This highlights the fact that, in a restructured scenario, contracts between trading entities must be considered as system decision variables (in addition to the usual generation, loads and flows). Congestion can be identified by calculating ATC [8] of all line with considering all transactions. Such transactions can be only possible if ATC is known in advance. With this proposed method the optimized value of ATC can be can calculated in advance for different combination of transactions between source and destination bus. Hence with this algorithm one can predict future transaction for a given area. One of the bio-inspired methods, Genetic algorithm is used to develop this method. The ATC can be determined with the static constraint such as line flows, voltage limits and maximum loadibility limit. ATC calculation must be accurate and fast because it is posted on OASIS website by ISO [9]. For determination of ATC, network sensitivity based methods utilizing A.C. Distribution factors are being widely used [11].

With the help of proposed work the multiple transactions can be randomly generated by Genetic Algorithm. After generating transaction between source and destination buses optimized value of ATC can be calculate for each generated transaction for specific number of iterations. The solution to the optimization problem gives the amount of accepted requests and available capability of transmission line could result a safe and reliable transmission system.

Whenever the physical or operational constraints in a power system become active, the system is said to be in a state of congestion

Congestion management [1] is one of the most challenging aspects in a multi-buyer/ multi-seller system. In the vertically integrated utility structure, all entities such as generation, transmission and distribution are within the domain of a central energy management system. Generation is dispatched in order to achieve the system least cost operation. In such systems, congestion management is usually taken care of by determining the optimal dispatch solution using a model similar to the optimal power flow or the security constrained economic dispatch problem. This effectively means that a generation pattern is determined such that the power flow limits on the transmission lines are not exceeded.

ATC defined as measure of the transfer capability remaining in the physical transmission network for further commercial activity over and above already committed uses. Mathematically ATC is defined as the Total Transfer Capability (TTC) less the Transmission Reliability Margin (TRM), less the sum of existing transmission commitments (which includes retail customer service) and the Capacity Benefit Margin (CBM) [8].

Congestion do occur in both vertically bundled and unbundled systems but the management in the bundled system is relatively simple as generation, transmission and, in some cases, distribution systems are managed by one utility. The management of congestion is somewhat more complex in competitive power markets and leads to several disputes. To manage the congestion in real time operation, normally following methods are adopted:

i)        Use of available resources for congestion management such as rescheduling of generation based on minimum bids, operation of on load tap changers, phase and regulators, and various FACTS controller etc,

ii)        Provide the timely information regarding the probability of having a particularly line congested and economic incentives to system users to adjust their requests and remain within the system constraints.

iii)        Physically curtail the transactions. System operators always try to use the first option, wherever it is possible. Physical curtailment is considered as the last option for congestion management.

During the real time dispatch, the knowledge of the group of system users, which have similar effect on the transmission constraints, is of interest. Congestion management using Available Transfer capability (ATC) has been reported in this paper [8].

PTCDF and LODF (Line Outage Distribution Factor) method is extensively used in ATC calculation. Here, this method is explained thoroughly. Other two methods are not considered as they are rarely used for calculation of ATC [3], [4], [6], [7]. The most sensitive zones have been identified as the union of real and reactive line flow sensitivity indices [10]. The PTCDFs have been derived utilizing the sensitivity properties of the Newton-Raphson load flow (NRLF) Jacobian as given below.

Where n = bus number at which transaction is to be done between bus i-j.

are Jacobian elements with decouple principle.

The new line flows is given by following equations

ATC is given by equation as under

If proposed transaction ΔPkn is less then ATCn then transaction is allowed, if not then transaction must be rejected or limited to ATC. Thus ATC can be used as a rough indicator of relative system security [8]. ATC information can help ISO to determine the validity of bidding results in an open access deregulated [2] Electric market when timely ATC information is very important. It can also help the power market participants to place bid strategically when congestion happens. ISO when the ISO [9] posts the ATC value for particular transaction.

Genetic Algorithms (GA) are based on random search method that can be used to optimize complex problems. Some fundamental ideas of genetics are borrowed and used artificially to construct search algorithms that are robust and require minimal problem information. GA’s also do not need a good initial estimation for the sake of problem solution. In other words, if the initial estimates are weak, they can be corrected by an evolutionary process of fitness. There are many methods available for coding decision variables in genetic algorithm [11] like Binary coding, Decimal coding, Octal coding and Hexadecimal coding. Conventional binary codification of variables for genetic algorithm has been used in this paper.

After reproduction the crossover operator is implemented. The purpose of crossover is to create new strings by exchanging information among strings of the mating pool. Many crossover operators have been used in the literature of GAs. In most crossover operators, two individual strings (designs) are picked (or selected) at random from the mating pool generated by the reproduction operator and some portions of the strings are exchanged between the strings. A single point crossover preserves the structure of parent strings to the maximum extent in child string. However, the preservation reduces with the increase of cross sites and is minimum in case of uniform crossover [12]. In this paper, single point crossover scheme is used, which combines the advantage of multipoint crossover and at the same time helps in preserving some portion of parent strings. A crossover probability pc is used in selecting the parents for crossover.

The mutation operator is applied to the new strings with a specific small mutation probability, pm. The need for mutation is to maintain diversity in the population. The mutation operator changes the binary digit 1 to 0 and vice versa. In this paper, single point mutation has been used in which a mutation site is selected at random along the string length and the binary digit at that site is then changed from 1 to 0 or 0 to 1 with a probability of pm.

Idea of elitism has been already introduced. When creating new population by crossover and mutation, we have a big chance, that we will lose the best chromosome. Elitism is name of method, which first copies the best chromosome (or a few best chromosomes) to new population. The rest is done in classical way. Elitism can very rapidly increase performance of GA, because it prevents losing the best found solution. In this proposed work best fitness value is copied before mutation and cross-over. The strategy of replacing the worst string of the new population with the best string of the current population can help the algorithm to give best results. Genetic algorithms with this strategy are referred as genetic algorithms with elitism or EGA [13]. Some research results [13] give an idea about that elitism can speed up the performance of the GA appreciably, which also can help preventing the loss of good solutions once they are found.

Control Parameters for GA is as shown in Table 1.

In this work it is assumed that the maximum capability of each transmission line is 200 MW. In this proposed work the source bus numbers are 11, 8, 13 and destination bus numbers are 3, 10, and 25. The transaction of power can be possible for any pair of source-destination bus. In IEEE 30 bus system there are 41 lines are to be evaluated using Genetic algorithm.

F     Check for convergence (Is transaction is over?)

H    If ‘yes’ calculate final optimized value of ATC for given transaction between source and destination bus and print results.

The system comprises of IEEE 30 buses. In this proposed work the source bus numbers are 11, 8, 13 and destination bus numbers are 3, 10, and 25. The transactions are generated randomly by GA and optimized value of ATC can be calculated as 49.91 MW as shown by Fig.1 for specific transactions. 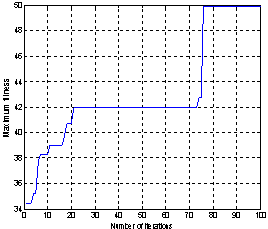 Objective function evaluated by 10 trials of 100 iteration per trail. The best combination of the transaction between sources to destination bus obtain as shown in Table 2

Table 2. Result for valid transactions at optimized value of ATC.