Exploring Next Generation Energy Harvesters with PPE and IDE Electrodes: A Review

Abstract: Next generation harvesters promises environment friendly material suitable for medical field also. This paper reviews recent energy harvester for self-powered Microsystems and propose ZnO piezoelectric material for next generation harvesters. In addition to this, Vibration-powered generators are typically subjected to various design related issues which are addressed in this paper. Power can be generated from various environmental sources such as ambient heat, light, acoustic noise, radio waves, and vibration. Piezoelectric based harvester extract energy from the freely available ambient sources i.e. vibration or motion energy. The vibration energy can be converted to electrical energy by the use of piezoelectric PZT, ZnO, AlNGaAs cemented to micro cantilever. Piezoelectric electrodes play a vital role in energy extraction with higher efficiency .Piezoelectric-type harvesters have the highest reported energy density per volume. Furthermore, piezoelectric materials have an inherent capability of converting the mechanical energy into electrical energy, eliminating the need for external magnetic fields, complicated switching systems, and architectural design complexities. In this paper we have reviewed the work carried out by researchers during last few years. This review paper helps to new comers to decide best structure, material and approach to carry out their research work. Results obtained show a good scope for MEMS harvesters in numerous fields including medical field was far away because of poisonous piezoelectric material.

Recent improvements in the microelectronic and microelectromechanical system (MEMS) technologies enabled the fabrication of various sensors with remarkably small dimensions and low power requirements. Compounded with mass fabrication capabilities and low unit costs, this makes it possible to create wireless sensor networks that can monitor several parameters simultaneously using these omnipresent micro-fabricated sensors. Although success of such systems heavily depends on the performance of the sensors, the major limiting factor is generally the power management using batteries. Currently used batteries increase the cost and the size of these devices, and more importantly, it is not feasible to replace or manually recharge them. A possible solution to this problem is to apply a form of energy harvesting to convert the available ambient energy into electrical energy to recharge these batteries or substitute batteries while providing self-sustainability and intelligent power management for the overall system. In most of these applications, sensor data are only collected intermittently. Therefore, current interest is growing in utilizing harvested energy that is stored in on-chip capacitors and effectively eliminating the batteries. Although the ambient energy can be available in different forms, mechanical energy is widely preferred for energy harvesting applications because of the simplicity of the design and fabrication.

Alternative sources of energy are solar, magnetic field and wind. Outdoor solar energy has the capability of providing power density of 15, 000 _W/cm3 which is about two orders of magnitudes higher than other sources. However, solar energy is not an attractive source of energy for indoor environments as the power density drops down to as low as 10–20 _W/cm3. Mechanical vibrations (300_W/cm3) and air flow (360 _W/cm3) are the other most attractive alternatives. In addition to mechanical vibrations, stray magnetic fields that are generated by AC devices and propagate through earth, concrete, and most metals, including lead, can be the source of electric energy[2].

Piezoelectric-type harvesters have the highest reported energy density per volume. Furthermore, piezoelectric materials have an inherent capability of converting the mechanical energy into electrical energy, eliminating the need for external magnetic fields, complicated switching systems, and architectural design complexities. Power can be generated from various environmental sources such as ambient heat, light, acoustic noise, radio waves, and vibration[1]. Vibration energy harvesting is the most suitable power generation method because vibrations are readily available in almost all cases. A highly efficient way to harvest vibrational energy is to use piezoelectric materials for the energy transformation [3].

When base of structure is accelerated due to vibrating source(s) pressure (stress) is exerted to a material, it creates a strain or deformation in the material. The capability of the piezoelectric thin film in generating an electrical output in response to mechanical energy or vibration has given a significant impact in our daily lives. Piezoelectric thin film has been widely used in various MEMS applications such as surface acoustic wave (SAW) resonators, pressure sensors, biomedical and energy harvesting. In energy harvesting application, a piezoelectric energy micro-generator typically harvests mechanical energy or vibrations and converts it to electrical energy through piezoelectric effect. Different piezoelectric materials can affect the performance of the energy harvester due to different piezoelectric constants. Some examples of piezoelectric materials include lead zirconatetitanate (PZT), zinc oxide (ZnO) and aluminum nitrate (AlN)[9]. These parameters affect the mechanical and electrical parameters of the device. Mechanical energy in cantilever is generated due to stress and strains produced in beam as a result of acceleration of environmental vibrations.

Most of the previous work has been concentrated on the material selection, coupling of electrode, figure of merit and their structural geometry. In case of interdigitated electrode the width, spacing and length of electrode fingers is also taken into consideration for optimization. Proper coupling mode improves power harvesting.

Umi et al. [9], provided accurate information on the frequency, stress and voltage output of a ZnO piezoelectric energy harvester. They found out that ZnO piezoelectric energy harvester with the length of 150 µm, width 50 µm and thickness of 4 µm generates 9.9184 V electric potential under the resonance frequency of 0.71 MHz and 1µN/m2 mechanical force applied. This was a parallel plate electrode structure. Table 1 shows the effect of different piezoelectric material on output voltage, displacement and resonant frequency.

Among different values of output potential obtained for different materials is observed to be highest for ZnO due highest direct piezoelectricity relationship. The cantilever depicted below is generalized structure with ZnO layer sandwiched between Al layers with bottom Silicon substrate.

This section of paper reveals drawback of parallel plate electrodes and superiority of interdigitated electrodes (IDE). Toprak et al.[1] worked to obtain optimized geometry of IDE and cantilever, including the piezoelectric and non-piezoelectric material for cantilever. Geometry with PZT thickness of 0.6 µm and an IDE consisting of 12 finger pairs gave Maximum output energy of 0.37 pJ for a 15-µN force. This energy is reduced to 1.5 fJ for 5 µm PZT thickness with 2 electrode finger pairs. 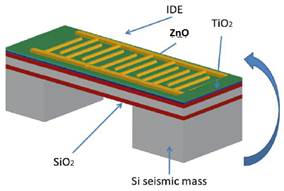 Selection of IDE geometry and coupling is studied in above section of the paper. Now the one of the important parameter is mode selection which is described in next section of paper. 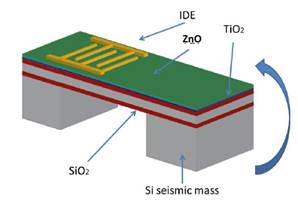 Chidambaram et al.[3] The leakage current density of the IDE structure was measured to be about 4 orders of magnitude lower than that of the PPE structure. The best figure of merit (FOM) of the IDE structures was 20% superior to that of the PPE structures while also having a voltage response that was ten times higher (12.9 mV/μ strain). The IDE lower power loss inside the PZT for this kind of electrode. Some of the literature reveal study of parallel plate electrode(PPE) while some show for interdigitated electrode (IDE). Since IDE show better outputs it became part of interest due to better efficiency.

Ralib et al.[5] simulated on The prototype cantilever structure consists of four layers namely: Si/ PZT/Pt interdigitated electrodes / Ni proof mass. The size of the cantilever beam is 23μm x 71 μm with thickness 37 μm operating in d33 mode. The graph shows the expected sharp change in displacement as the frequency approaches the Mode 1 value that is 55MHz which shows the highest displacement shown in Figure 5. placing 24 Pa pressure at the end of the cantilever beam again provides the highest displacement with frequency of 53.7 MHz.

Ryan et al.[7] The interdigitated beam utilizes the d33 piezoelectric constant. The d33 constant for PZT is commonly known to be approximately twice as large as the d31 constant. Therefore, designing a d33 structure properly could produce more energy and larger tuning range than a d31 structure. 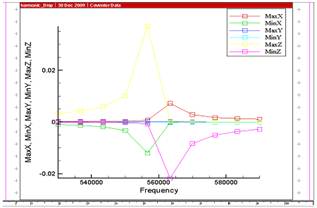 Fig. 5. Graph for displacement vs Frequency for piezoelectric harmonic analysis[5].

The coupling coefﬁcient of piezoelectric generators depends primarily on the piezoelectric material used, although the elastic properties of the other materials used in the generator structure may also inﬂuence the values. [12]

Hanim et al.[8] got the resonant frequency as 34.4 kHz at output voltage of 2.75V for device dimensions as shown in Table 2.

Andrea et al.[11] investigated the advantages of interdigitated electrode configurations (IDE) with respect to parallel-plate electrodes (PPE) in terms of output voltage and output power from the constitutive equations of piezoelectricity. A figure of merit for comparison has been proposed and calculated for both PPE and IDE structures. IDE has 2.12 times the figure of merit of PPE. The latter yielded higher energy densities and output voltages.

Ankita et al. [13] The cantilever of E shaped is being designed and simulated with dimensions of 6.832mm x 2.180mm. The materials play a vital role in sensitivity of sensor and PZT 5H is selected on the basis of material analysis carried out. The Z displacement of 5.3 µm to 46.14 µm has been recorded.

Ankita et al.[14] The cantilever of E shaped has been designed and simulated with dimensions of 3.332mm x 1.180mm for loading on bridges. The materials play a vital role in sensitivity of device and PZT 5H is selected on the basis of materials analysis carried out.

The voltage generation of about 3.12 mV and Z-displacement of 4.03µm has been recorded at 100 Hz of frequency.

The tuning of the resonant frequency and electrical damping force is needful to keep an optimum output power, especially when the vibration amplitude and frequency is susceptible to change over time. In this paper, we have first presented the different key issues for VEH[15].

The EH device has a wideband and steadily increased power generation from 19.4 nW to 51.3 nW within the operation frequency bandwidth ranging from 30 Hz to 47 Hz at 1.0 g. Based on theoretical estimation, a potential output power of 0.53 μW could be harvested from low and irregular frequency vibrations by adjusting the PZT pattern and spacer thickness to achieve an optimal design[17]. 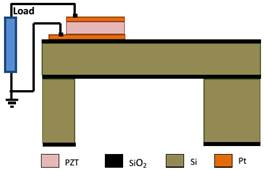 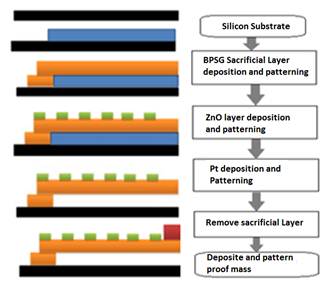 • Not limited above all

Designs of energy harvester with ID electrodes are reviewed in this paper. Comparing IDE and PPE structures for electrodes it is observed that IDE has four times better output as compared to PPE. It is also observed that IDE has better Figure of merit. Device geometry, modes, piezoelectric materialand design has a crucial role in giving high output voltages at resonant frequency. Zinc oxide material fornext generationharvester is proposed as piezoelectric layer because of its excellence bonding to substrate material such silicon and high piezoelectric coupling coefficient. Choosing the proper interdigitated electrode layout and beam dimensions can nearly double the performance. Thus, designing a proper d33 unimorph or bimorph device will increase energy harvesting performance. These structures are being used forwireless sensor networks still there is scope for further optimization to obtain power which will be enough to drive portable devices.

Authors would like to thank Dr.S.S.Sadistap,Head, CEERI Pilani, Principal Dr. R.S. Pande and head of the department,Electronics Engineering, SRCOEM, Nagpur, Mr.Deepak Khushlani for the needful support and guidance.