Abstract: As increasing of fossil fuels and the trend of expiring, using of alternative fuels has been on the agenda of most countries particularly in the past two decades. In the meantime, the using of wind energy and solar radiation are extremely popular as sources of green energy and high-efficiency. Hence, the prediction of wind and solar power is important. The power output of these power plants depends on wind speed, temperature and radiation. In this paper, the uncertainty of wind and solar power generation, and load forecasting are considered based on correlation analysis on wind power, solar radiation, and ambient temperature time series. Predicted values are given to the hybrid system (wind–fuel cell–photovoltaic) to provide electrical load for the 24-hours. Finally, the proposed model is applied to demonstrate its effectiveness based on actual examples information of load, wind, radiation, temperature of wind farm and solar power plants.

Increasing human population has direct effect on electrical energy demand which has increased the electrical power generation [1]. So that in 2007, 26 % of pollution and greenhouse gas emissions are resulted from the production of electricity and heat [2]. Therefore in recent years, electricity generation based on renewable energies, has been highly regarded in different countries [3]. Electrical power generation based on wind energy, has been fastest growing among the renewable energy sources [4]. This is due to its environmental benefits. It is estimated that in 2020, 12% of the world's electricity will supply from wind power [6].So, wind power generation will play an important role in electricity supply. Inability of wind power to follow the load pattern is important point and required to design a hybrid system in are as separated from the main system. In this paper, a hybrid system (wind-fuel cell– photovoltaic) is designed to provide the load in a day. So, the radiation and temperature forecasts which are solar system inputs. They are as important as wind power forecasting.

An accurate forecasting of the electrical load, wind speed, solar radiation and temperature can have positive impacts on the production scheduling. In this paper, short-term prediction of load, wind speed, solar radiation and ambient temperature are applied by feed forward neural network according to their historical time series. Finally, the forecasted data are given in to a hybrid system. The proposed model is shown in Fig.1. 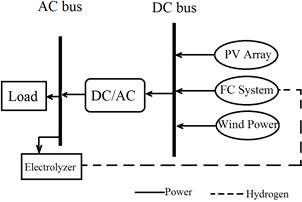 Different sections of this paper are divided as follows. In Section 2, load model is presented. In Section 3, radiation, temperature and wind speed are forecasted. In section 4, designing and simulating the Solar panels, fuel cell and wind power plants are presented. Finally, the conclusion drawn from proposed hybrid system is provided in section 6. 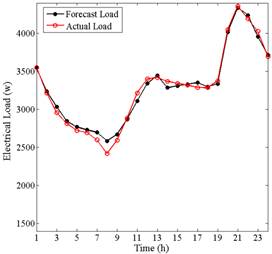 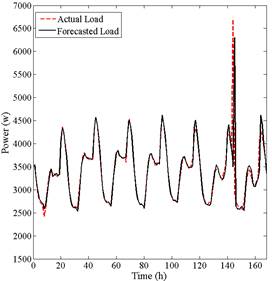 In this section, artificial neural networks and correlation analysis are presented as methods for cognitive behavior of wind speed, radiation and temperature data, and the predicted data are resulted by a forecast engine based on artificial neural network. Wind speed, radiation and temperature time series are shown respectively in Fig. 4, Fig. 5 and Fig. 6. 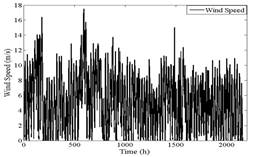 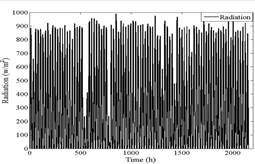 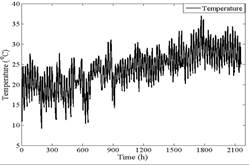 Neural network is the nonlinear technique that can be applied to detect patterns and find the complex behavior of a system through its input and output data. A neural network (NN) needs learning to find the complex behaviors of data. Despite the NN is simple, but it is a powerful and flexible tool to forecast. NN have an ideal output by choosing appropriate data number for training, inputs, hidden layers and neurons in each layer. NN can approximate any nonlinear function [6]. Thus, depending on how much the system inputs are appropriate; we will expect a better response of system outputs.

between two random variables X and Y, with mean values

, expresses covariance between normalized variables. The correlation coefficient obtained from the following equation:

The appropriate inputs of the neural network are selected by taking the minimal value of the correlation coefficient.

Wind power is proportional to air density, wind speed and environmental obstacles [7][8]. Air density is an exponential function of air temperature and pressure. So wind power is dependent on weather conditions such as wind speed, wind direction and temperature. Also, the wind power has great relationship with its past values in any moment [4][5].Wind power is a non-linear function of wind parameters such as wind speed, air density and turbulent kinetic energy [8]. Wind power forecasting methods can be divided into physical models and time series or statistical models [13][14].

In physical model, wind speed is estimated in are going under the physical laws governing atmosphere, its behavior and the corresponding from wind power in a specified level of wind farm [15]. These models consider the physical characteristics of the environment, orography, atmospheric conditions (such as pressure and temperature) to estimate the future wind speed and wind power [16]. 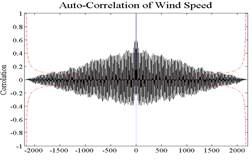 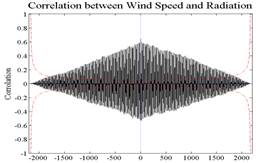 Fig. 8. Correlation between the wind speed and radiation.

The selected appropriate inputs related to wind speed depending on the amount of their cross-correlation which presented in Tables 1.

represents the wind speed and 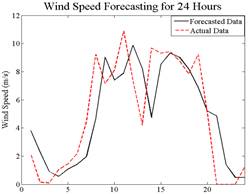 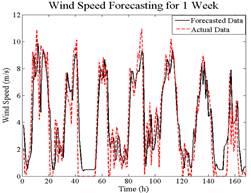 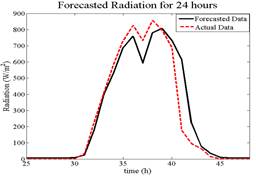 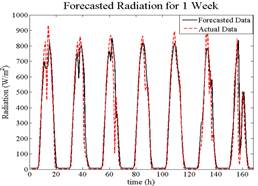 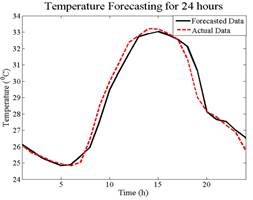 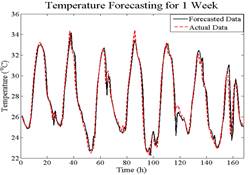 4. Designing and Simulating the Hybrid System 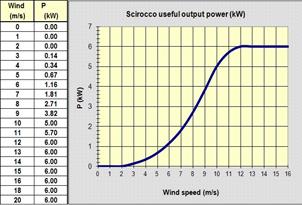 Wind speed can be approximated by the following equation [17][19]:

is cut-in speed and

In section 3-2, we forecast wind speed for a 24-hour period. According to Eq. (3) and parameters A, B and C, forecasted wind power and actual wind power are shown in Fig. 16. 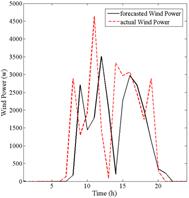 As shown in Fig. 16, when the wind speed is lower than

PV arrays can be simulated by an electrical circuit (Fig.17), which includes a current source and a diode. Current power supply circuit is representative of solar radiation in this circuit [19].

Current is fixed to a value of voltage array, after that with voltage increasing, the diode opened and the output current is reduced drastically [20][21]. Output voltage and current are obtained from the reference [22] equations. Simulation is performed by considering the values which mentioned in [22] and [23], the MA 36/45solararraysresultsis mentioned finally according to [23].

As the clean energy conversion technology, fuel cell is the promising alternative to electrical power generation [24]. In this paper, PEM fuel cell is simulated because of the quick Startup and high efficiency and power-voltage characteristic has been evaluated based on [24] simulations. 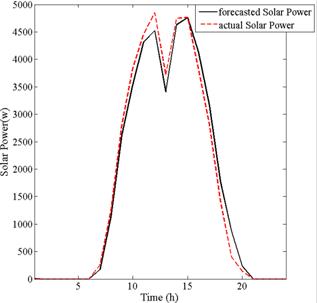 In this section, the impact of uncertainty of load forecasting, wind, radiation and temperature are investigated on system. Hence, the system will be discussed in the four cases:

A.  Load, wind speed, radiation and temperature are actuality.

B.  Load, wind speed, radiation and temperature are forecasted.

C.  Wind, radiation and temperature are actuality and load is forecasted.

D.  Wind, radiation and temperature are forecasted and load is actuality.

As shown in Fig. 21, power used in the fuel cell is not significantly different between the four cases and it is because of accurate load forecasting. Note that the wind and radiation don’t work in this situation. So the uncertainty in load forecast has little impact on the system.

Electrolyzer power curves are shown in Fig. 22. Due to suitable gust of wind and high solar radiation during the day, system power generation exceeds the load and the extra Power generation spend to product hydrogen and stores it in the hydrogen tank. As shown in Fig. 22, uncertainties have a large impact on the electrolyzer power. Since, electrolyzer power affected by wind power and wind forecast has high uncertainty. Therefore, cases B and D are very different. Cases A and C are so similar and it’s also due to involved the uncertainties of wind speed and radiation forecasts in system.

The amount of hydrogen stored in a tank is shown in Fig. 23. Case C and A are similar. Cases B and D are very different, due to wind uncertainty. Whatever the wind uncertainty is greater, the incorrect scheduling and consequently more fuel consumption and costs will suffer. 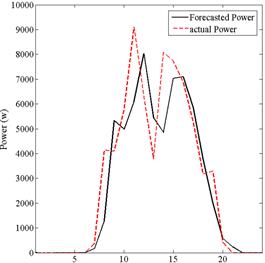 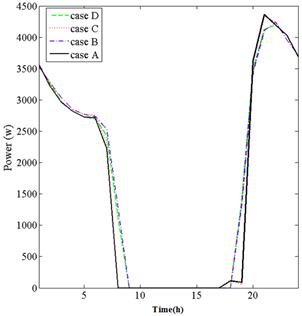 With hybrid industrial development in the field of renewable energies, using hybrid energies (wind-fuel cell– photovoltaic) in remote or off-grid areas is deemed important and profitable. Hence, the accurate predictions of wind speed, radiation and temperature are important. We can do the accurate scheduling of generation, fuel and cost by considering the exact short-term and long-term of load, wind, radiation and temperature forecasting. 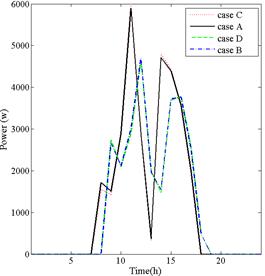 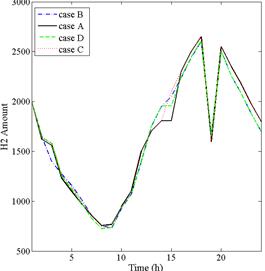