Abstract: This study investigated adsorption of Lead (Pb2+), Copper (Cu2+) and Cadmium (Cd2+) from minerals processing wastewater using activated carbons prepared from waste corn cobs. The activated carbons were prepared by carbonisation of the waste at 900°C to obtain carbonised corn cobs. Samples of the carbonised material were activated at 900°C for various durations using steam as an activating agent. The derived activated carbons were contacted with the wastewater containing heavy metals to assess their heavy metal removal abilities. From the results, up to 99.9%, 99.8 and 99.7% adsorption were attained for Pb2+, Cu2+ and Cd2+ respectively. This reduced the concentrations of Pb2+, Cu2+ and Cd2+ from 1.56 mg/L, 1.87 mg/L and 0.69 mg/L, respectively, to <0.002 mg/L for each metal ion. The results demonstrate that the derived activated carbons have the capacity to significantly reduce heavy metal concentrations to levels below the World Health Organisation (WHO) standards for safe drinking water.

Maize is a popular cereal crop cultivated in many parts of the world [1]. During the processing and production of corn, several wastes are generated including corn cobs and corn husk. The world production of corn increased in the 1980s, which also implies a high amount of corn cob waste. In Ghana, where this study was carried out, corn production increased from 346,000 tonnes in 1982 to 1,800,000 tonnes in 2015. It is estimated that about 18 kg of cobs are obtained from every 100 kg of corn produced [2]. The corn cobs are regarded as carbonaceous materials but a greater percentage of it, for example in Ghana, ends up in landfills as waste.

In recent times, various low-cost activated carbons derived from carbonaceous agricultural wastes [3], including coconut shells [4], palm kernel shells [5], chickpea husks [6] and corn cobs [2] are used as adsorbents for gases and liquid phase pollutants. Treatment of water in Ghana is done by several processes such as ion exchange, chemical precipitation and solvent extraction. However, these processes are very selective and expensive.

Since water continues to be an essential supporter of all forms of plant and animal life, there is the need for treatment when it gets polluted, especially with heavy metals. The main threats to human health from heavy metals are associated with exposure to lead, cadmium, mercury and arsenic. These metals have been extensively studied and their effects on human health regularly reviewed by international bodies such as the World Health Organization (WHO). For example, cadmium represents a health risk via accumulation in living tissue and has been associated with an increased risk of lung cancer, emphysema, kidney damage and in extreme circumstances, damage to bones and joints [7-9]. Mercury and mercury compounds give rise to toxic effects associated with the central nervous system, the major areas affected being associated with the sensory, and auditory functions as well as those concerned with co-ordination [10]. Lead exposure has been associated with dysfunction in the haematological system and central nervous system. Decrease in intelligence and behaviour have been reported in children exposed to increased levels of lead [10-14].

Treatment of water in some parts of Ghana using imported activated carbon is not economical due to high cost of importation. Local production of activated carbon, with the ability to remove heavy metals from waste water cannot be overemphasized.

The corn cobs used in this work were gathered from a farm located in Koforidua, the Regional capital of the Eastern Region of Ghana. The corn cobs which contained sand were washed thoroughly to remove all the sand which could influence the final composition of the material. This was followed by drying at 110°C in an oven till constant weight was achieved before carbonisation. Proximate and ultimate analyses of a sample of the corn cobs, pulverised to -1 mm were determined using thermogravimetric analysis (TGA) in a Shimadzu TGA-50 H.

De-ionised water from the Minerals Engineering Laboratory of the University of Mines and Technology, Tarkwa, Ghana was used as the activation agent.

Wastewater sample used for the adsorption studies was collected from a stream in the Tarkwa environment. A plastic sample bottle was washed and well rinsed with distilled water before sampling. The sample bottle was submerged in the stream to a depth of about 0.5 m, opened, filled, corked and then removed. The water sample was immediately placed in an ‘ice chest’ in ice packs and transported to the laboratory for analyses within six hours using a Varian Fast Sequential Atomic Adsorption Spectrophotometer (Varian AA 240 FS).

2.2. Preparation of Activated Carbons from the Corn Cobs

Activation of the corn cobs was carried out in two steps. In the first step, the washed and dried cobs were carbonised in a gas fired static bed pyrolysis-activation reactor, designed and fabricated in Ghana [15], at 900°C pyrolysis temperature. This reactor has a stainless steel chamber of a rectangular cross-section, having a square groove positioned symmetrically at the bottom part of the reactor, which allows efficient heat transfer into the bed of material being pyrolysed. The design allows easy feeding of precursors as well as easy discharging of carbonised products [15]. The pyrolysis derived char was kept at the final pyrolysis temperature for 60 min to ensure pyrolysis is carried to completion as much as possible and then allowed to cool. The second step involved physical activation of the char samples at 900°C activation temperature using steam as the activation agent. The activation was done for 1.0 h, 2.0 h, 2.5 h and 3.0 h at a water flow rate of 0.2 mol/h/g. The activation procedure was repeated thrice for each time (duration) to assess the repeatability of the yields of the activated carbons.

2.3. Determination of Specific Surface Areas and Pore Volumes of the Activated Carbons

The determination of the specific surface area was done by the Brunauer, Emmett, and Teller (BET) method [16]. In this determination, adsorption of nitrogen by the activated carbons was carried out at 77 K using a Micromeritics TriStar 3000 apparatus. The BET surface area assessment was done by applying relative pressures ranging from 0.05 to 0.20. The total pore volumes of the derived activated carbons were estimated to be the liquid volumes of N2 at a high relative pressure of 0.96, assuming the molecular cross-sectional area of nitrogen to be 0.162 nm2. The micropore volumes were calculated by applying the Dubinin Radushkevich (DR) equation to the nitrogen adsorption isotherms of the activated carbons [17]. The surface areas and pore volumes determinations were repeated for each sample.

Adsorption experiment for each batch of activated carbons was done by contacting 500 mL of the contaminated water with 25 g of the previously prepared activated carbon in a bevelled glass bottle. The bottles and contents were placed on a roller and rotated at 150 rpm at a room temperature of (32°C) for a period of 60 min. Samples were taken from the bottles every 5 to 15 min. The solution samples were filtered using Whatman filter paper (0.45 µm pore size). A Varian Fast Sequential Atomic Adsorption Spectrophotometer (Varian AA 240 FS) was then used to analyse the concentrations of the metal ions present in the filtrate.

Carbonisation of 2700 g of the fresh corn cobs resulted in the production of 646 g carbonised material (char). The fresh corn cobs and corresponding char obtained after carbonisation are shown in Figs. 1 a and 1 b, respectively. The figures show that the char retained the form and structure of the fresh cobs as received. Unlike in related research studies [18] the cobs were not shredded.

They were carbonised and activated as received because the authors envisaged that the fibrous structure of the cobs retained after the activation will allow infiltration of liquids to ensure adsorption at the active sites of the products. The result of carbonisation shows that the yield of char obtained compares well with that obtained by other researchers. For example, Kaźmierczak et al. [2] also studied sorption properties of activated carbons obtained from corn cobs by chemical and physical activation. In their work, a sample of corn cobs was heated from room temperature to a final pyrolysis temperature of 800°C. The sample was kept at the final pyrolysis temperature for 60 min and then cooled. The yield of char obtained was 16.6 wt%. 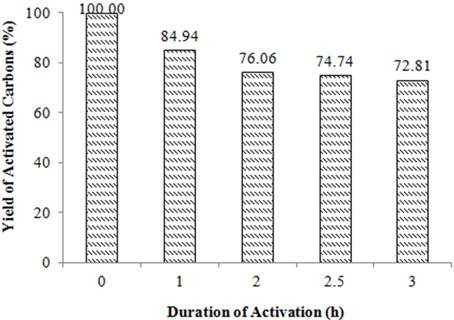 Fig. 2. Influence of duration of activation on the yield of the activated carbons produced from the corn cobs at 900°C activation temperature.

3.3. Surface Areas and Pore Volumes of the Activated Carbons

Table 1 shows the BET surface areas of the activated carbons produced by steam activation at 900°C activation temperature and various durations of activation of the chars obtained from the pyrolysis stage.

The BET surface areas of the activated carbons ranged between 510.10 m2/g and 631.15 m2/g for various durations of activation ranging from 1 h to 3 h.

From the results in Table 1, the BET surface areas of the activated carbons produced in this work are well within the range reported in literature for various precursors. For example, Kaźmierczak et al. [2] pyrolysed corn cobs at 500°C and 800°C and subjected the resulting chars to physical activation using carbon dioxide as the activating agent. The specific surface area of the activated carbon obtained from the 500°C pyrolysis derived char was 352 m2/g and that of the 800°C pyrolysis derived char was 566 m2/g.

Again, a very good repeatability of the surface areas and pore volumes of the activated carbons obtained under similar conditions were observed.

The metal ions in the wastewater analysed during this research were Pb2+, Cu2+ and Cd2+ with initial concentrations 1.57, 1.87 and 0.69 mg/L, respectively. The results of the adsorption of Pb2+, Cu2+ and Cd2+ by the various corn cob activated carbons are presented in Figs. 3 to 5.

From Fig. 3 a, the concentrations of Pb2+ in solution decreased sharply in the first 15 min of adsorption and thereafter adsorption slowed down. Fig. 3 b is an expanded version of the lower concentration (<0.15 ppm) region of Fig. 3 a, in order to make the relative adsorption abilities of the carbons derived after various durations of activation more legible. 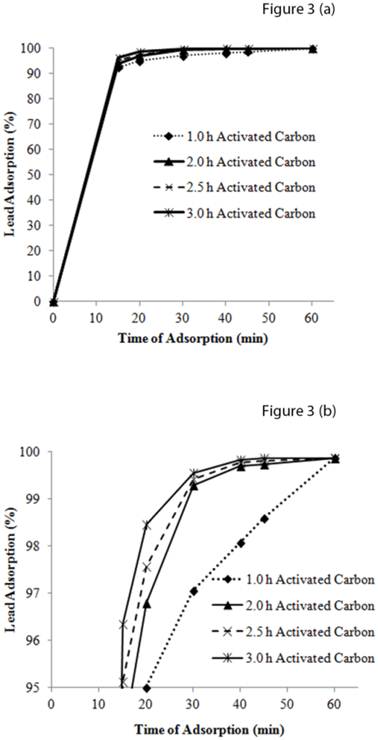 While the activated carbon obtained after 3.0 h activation adsorbed up to 99.6% Pb2+ after 30 min, that obtained after 1 h adsorbed up to 97.1% within the same period. It took about 50 min for the 1 h activated carbon to adsorb up to 99.0%. The results in Table 1 show that the surface areas and pore volumes increased with activation time. It can therefore be inferred that the rate of adsorption of the metal ion was a function of the pore volumes and internal surface areas developed during the activation process. The performance of the locally produced corn cobs activated carbon for lead removal is encouraging compared with results of similar tests elsewhere [9,24,25]. For example, Bernard et al. [9] achieved 80% removal of Pb2+ from industrial wastewater by activated carbon prepared from coconut shells after 30 min of adsorption.

Fig. 4 b is an expanded version of the lower concentration (<0.15 ppm) region of Fig. 4 a, to make the relative adsorption abilities of the carbons derived after various durations of activation more legible. The figure shows that the rate of adsorption of Cu2+ was found to be a function of the pore volumes and internal surface areas developed during the activation process. Here, it was established that increase in surface area and pore volumes of the activated carbons resulted in increased adsorption.

Fig. 5 shows adsorption of Cd2+ from the wastewater by the various activated carbons in relation to adsorption time 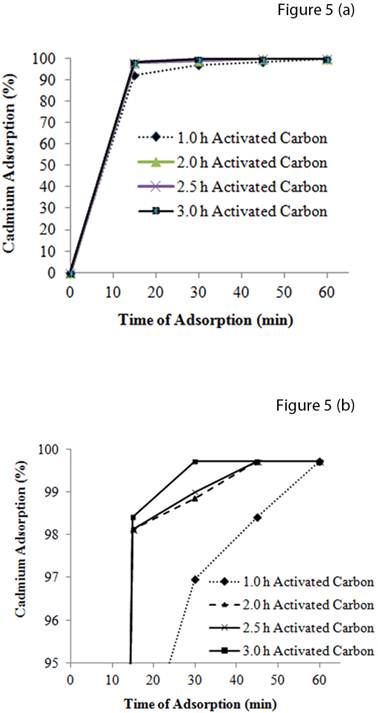 The initial concentration of cadmium in the wastewater of 0.69 mg/L decreased sharply in the first 15 min. After that period, adsorption slowed down. Adsorption of 99.7% Cd2+ was achieved after 45 min of adsorption leaving a residual Cd2+ concentration of 0.002 mg/L, which is below the WHO threshold of 0.003 mg/L for safe drinking water.

The adsorption of Cd2+ was also found to depend on the pore volumes and internal surface areas of the derived activated carbons. Here also, the adsorption performance of the activated carbons increased with the duration of activation. Again, this can be attributed to the increase in their surface area and pore volumes with increase in activation time.

The support of the Government of Ghana via a Ghana Education Trust Fund (GETFund) Scholarship is gratefully acknowledged.