Effects of Solution pH and Seed Material on MAP Crystallization

Phosphorus is an important factor causing eutrophication of water body, and culture eutrophication has been identified as the primary problem affecting surface water quality globally [1]. Excessive nutrient loading in lakes and ponds may cause turbidity and malodour of the water, while enhanced growth of phytoplankton and other aquatic plants associated deoxygenation can lead to fish kills [2-3]. Therefore, Phosphorus has been established as the nutrient that commonly limits productivity and the phosphorus emission standards are stricter for various waste streams.

Meanwhile, Phosphorus(P) is essential to agricultural and industrial development，which is mined almost commonly from phosphorite or phosphate rock. phosphorus is a nonrenewable resource in this context [4]. Global phosphate reserves are limited and a series of studies reported that the existing phosphate reserves would be depleted in the next 50 to 100 years [5].

Therefore, sustainable phosphorus recovery from waste streams has been paid more and more attention, which can reduce reliance on the finite phosphate resource, relieve the growing demands pressure of phosphorous consumptions, and on the other hand, can also reduce water pollution caused by phosphate-containing waste water discharge.

Struvite crystallization in waste water has shown tremendous potential for development in recovering phosphorus, which can be used as fertilizer in agriculture [6]. As a slow-release fertilizer, struvite is more conducive to crop growth compared to traditional fertilizers. In recent years, there have been many research studies on struvite processes. The phosphorus in waste water is mainly recovered by crystallization of magnesium ammonium phosphate (MgNH4PO4.6H2O, MAP) [7-8] and calcium phosphate (Cax(PO4)y, CP) [9-10].

One of the important disadvantages about struvite precipitation is that the crystals formed areuniformly small, ranging from 10 to 100 um [11], which make the struvite crystallization recovery more difficult, and fine crystals are apt to deposit in pipes. From an economic point of view, large crystals should be obtained to facilitate the recovery, transport and commercial operation of the final product [12]. Therefore, In designed struvite precipitation process, larger crystals are preferred.

However, it generally takes a considerable length of time (about days and weeks) to form larger crystals (approximately 400 um) during the natural struvite crystal growth process [13], and it is necessary to take measures to minimize the running process and make it cost-effective. To optimize the crystal formation process and improve phosphorus recovery rate, the batch pilot experiments described in this paper aim to evaluate the effects of seed material, practical size，dosing method, adding amount and pH on the phosphorus recovery rate and efficiency.

Synthetic wastewater solution was formulated to mimic phosphate-containing waste water. Solution was prepared with magnesium chloride hexahydrate (MgCl2·6H2O), ammonium chloride (NH4Cl), and potassium phosphate monobasic (KH2PO4). All chemicals were AR grade. The concentrations ofMgCl2·6H2O, NH4C1, KH2PO4 in synthetic wastewater solution are 6.0 mmol/L, 15.0mmol/L and 5.0mmol/L respectively, and the molar ratio of P, Mg and N is 1:1.2:3. The prepared solutions were equilibrated to room temperature in the laboratory four 24 hours before being used.

In the seeded experiments, white quartz sand was chosen as seed materials due to the low solubility under alkaline condition. To evaluate the effects ofparticle size of seedmaterial, three kinds of quartz sand granularities are used in the experiments, which are 25-50 mesh, 40-70 mesh and 70-140 mesh respectively.

Seed materials were introduced into the reactor filled with synthetic wastewater solution. Samples were obtained at different time intervals and filtered using 0.45um membrane. The concentrations of PO43--P were analyzed according to Standard Methods [14]. Magnetic agitators were used to accelerate reaction rates at low speed and 1.0M HCl and 1.0M NaOH were used for pH adjustment during the experiments. The solution pH was measured using a PHS-3C type pH meter (Shanghai Leici InstrumentPlant, China). All of the experiments were performed at 25℃ in the laboratory. 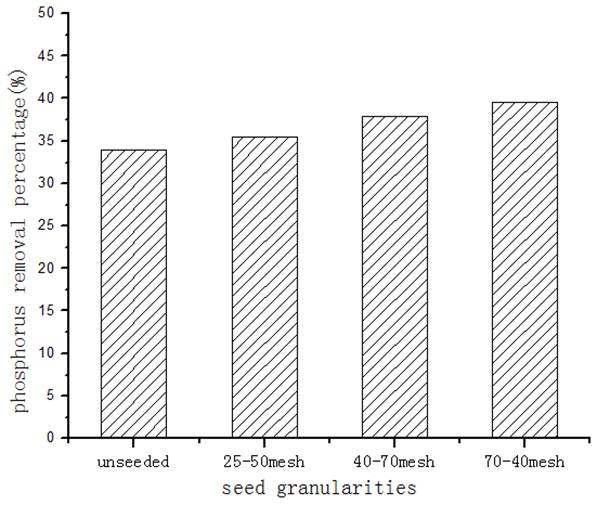 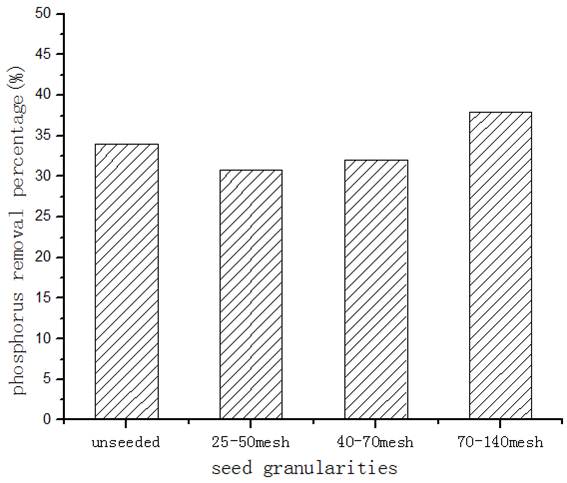 In order to evaluate the influence of the different particle size seeds on soluble PO4-Premovals, experiments undertaken over the range of quartz sand granularities tested were compared to experiments carried out under same conditions of precipitation but without seeds. It can be seen from the Fig. 1a thatPO4-P removals were 35.6%, 39.6% and 37.9% with the 25-50mesh, 70-140mesh and 40-70mesh, respectively, where at the same test conditions the soluble PO4-P removal without seeds was 34%. The experiment showedthatPO4-P removal increased distinctly when 1gquartz sand seeds were introduced (pH=7.5). Moreover, the bar graph revealed one obvious peak when 70-140mesh seed was added. Fig. 1b also showed that PO4-P removal reached maximum with 1g seed of 70-140 mesh. 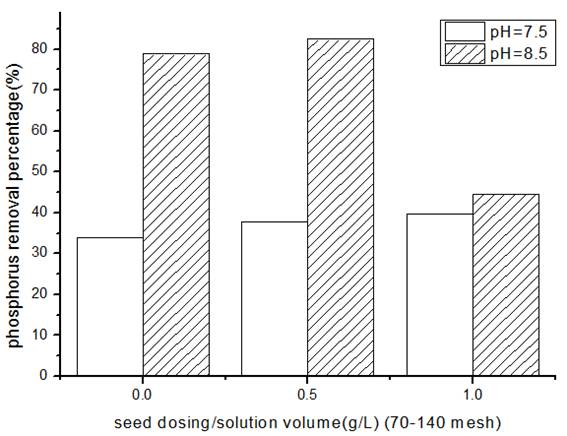 To evaluate the comprehensive influence of reaction conditions, three groups of tests were run withpH set points of 7.5 and 8.5. As shown in Fig. 2, in the first group of tests,when the value ofpH was adjusted from 7.5 to 8.5, the PO4-P removalsincreased dramatically from 34.00% to 78.85% without seeds addition.

In parallel, by introducing the seeds of 70-140 mesh, Fig. 2 showed that the PO4-P removals also increased sharply. For the waste water with addition of 1g seeds, the obvious increase occurred in the value of pH 8.5 and the corresponding grow rate is 38.22%. Moreover, the more remarkable PO4-P removals increase of the waste water doped with 0.5g seeds also appeared in the columns, which tripled with the pH adjusting from 7.5 to 8.5.

In order to study the PO4-P removals in phosphate-containing waste water, the waste water doped with different contents of seeds was carried out during crystallization experiments. Figure 3 showed the relationship between the amount of seeds (70-140 mesh) and thePO4-P removals atpH set points of 8.5.

As shown in Fig. 3, thePO4-P removals increased slightly from 78.85% to 82.50% when the seeds content increased from 0 to 0.5g. However while the seed adding amountcontinued to rise from 0.5g to 1.0g, the PO4-P removals decreased distinctly from 82.5% to 44.59%. Therefore an apparent peak was observed in the curve of PO4-P removals，where the particle size of seed was 70-140and the pH was constant at8.5, indicated that optimum seed adding amount for struvite precipitation is in the vicinity of 0.5g. 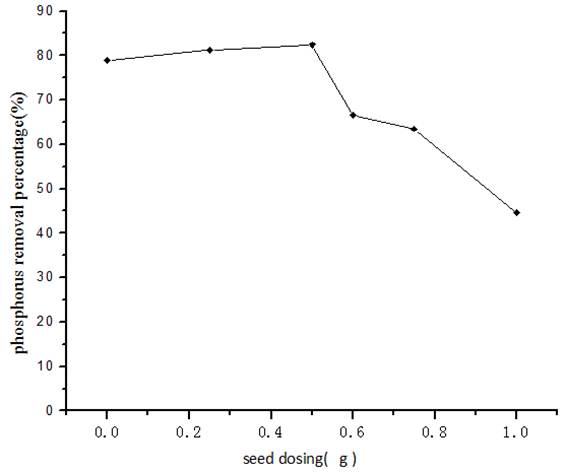 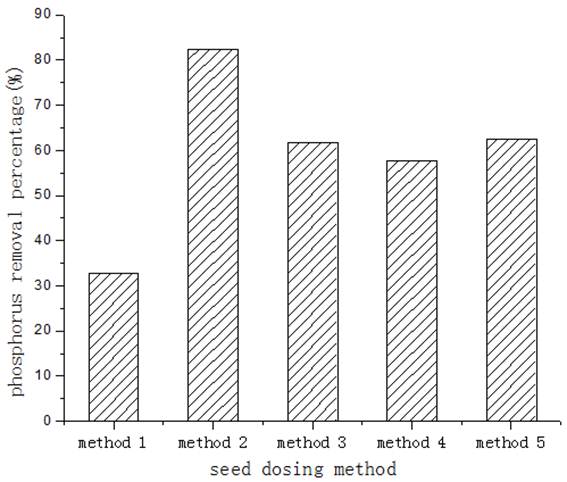 Compared with the first seed dosing method, the initial seed dosing was the same (0.2g) but the following seeds dosing was more in the processing of the fourth method. PO4-P removal efficiency ranged from 32.75% to 57.68% correspondingly. 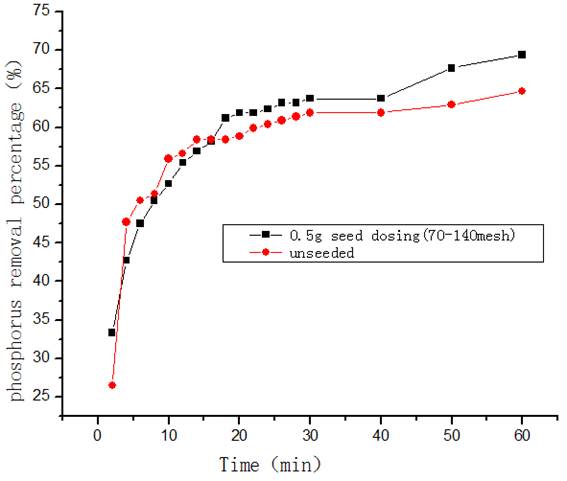 To evaluate the effect of seed on PO4-P recovery rate samples were obtained at different time intervals during the precipitation experiments. Fig. 5 presented the relationship between the reaction time and PO4-P recovery efficiency at pH set points of 8.5.

Solution with seeding materials achieved 33.55 to 63.66% phosphorus recovery, while those without showed 26.50 to 61.9% phosphorous recovery under the first 1 hour of the precipitation experiments. Similarly in the last half hour of tests solution with seeding materials reached 69.40% while those unseeded only showed 64.7%. The tests results illustrated that seed addition speeded the phosphorus recovery rate to some extent on the whole. 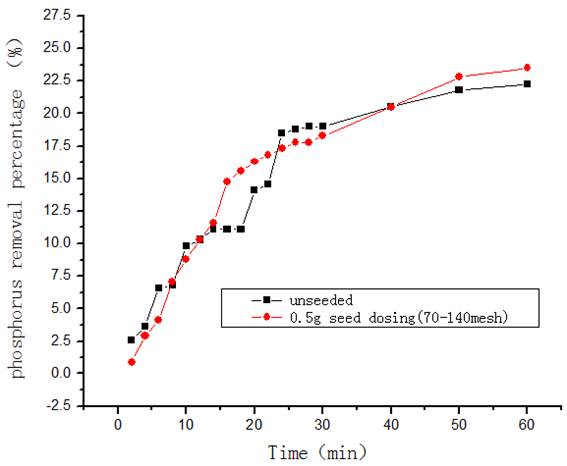 Struvite is a kind of white water-insoluble crystalline substance, and its general formula is MgNH4PO4.6H2O[15]. Struvite produces by the chemical reaction of Mg2+, NH4+, and PO43- in supersaturated solution, and the chemical equation is as follows.

From the above equation, It can be seen clearly that continuous consumption of OH- during MAP formation is the main reason for the PH decrease of the solution, thus keeping a stable alkaline environment during the crystalline process is very important. As shown in Fig. 2, the PO4-P removals increased dramatically from 34.00% atpH 7.5 to 78.85% at pH 8.5. Adnan et al [16], Battistoni et al [17] also stated that the operating pH should be raised up to 8.3 to get more higher phosphorus removal.

Moreover, experiment results demonstrated that solution pH also inﬂuencedthe growth rate of struvite crystal, when the value of pH was adjusted from 7.5 to 8.5,phosphorus recovery efficiency increased dramatically from 2.59% to 26.50% in the first 2 minutes of the precipitation tests (Fig. 5, Fig. 6). This result is in accordance with the studies conducted by Momberg and Oellermann, who pointed out that the induction time for struvite precipitation from an anaerobic digester supernatant reduced from days at pH 7 to less than 1 h at pH 8.5 [18]. In systems where the pH<8 struvite pre-cipitation is very slow and can spend several days [19]. The reason might be that an increase in solution pH caused an increase of supersaturation and a resultant increase in the growth rate [20]. All above investigations have found that pH plays an important role during the struvite forming process and solution pH affects phosphorus recovery percentage as well as phosphorus recovery rate. Kabdasli et al. proposed that pH might be used as an indicator of struvite nucleation [21].

The process of rystal formation includes two stages: nucleation and growth. Nucleation usually forms spontaneously or can be occurred by the aid of suitable nuclei. As the second stage, crystals keep growing until chemical equilibrium is reached [22]. Tests results revealed thatphosphorus recovery efficiency reached a maximum when quartz sand seeds (70-140mesh) were introduced (Fig. 1). It thus can be seen that addition of seed materials to serve as embryo during the struvite precipitation experiments has simulated the formation of nucleation obviously and further increased the phosphorus recovery efficiency.

The previous experiment results implied that the one-stage addition of quartz sand is highly favorable for phosphorus recovery (Fig. 4). The reason might be that nuclei formation before growth could occur on the surface of the seed materials quickly [23]. Nucleation is the ﬁrst step of the struvite crystallization process [20], so the initial seed dosing palys major role in the process of nucleation, and the follow-up seed addition has little effect. In our previous experiments, results also showed that phosphorus recovery percentage generally showed an increased trend with the initial seed dosing (Fig. 4).

The time lag between the achievement of super saturation and the starting of the crystal nuclei is often termed the induction time [24]. The advantage of inﬁnite induction time is the redissolving of induced crystals in solution due to high-energy consumption from a relatively low driving force [25]. Our experiment results showed that in the first 2 minutes of the precipitation tests, without seed, phosphorus recovery efficiency was 26.50%, while it had reached 33.25% in the seeded test (Fig. 5). This result may also be attributed to the fact that preliminary additions of seed materials induce surface diffusion of newly born clusters and govern crystallization [26]. Results also showed that After 16 minutes of the tests, phosphorus recovery efficiencies of seeded experiments were obviously higher than unseeded tests. This result implies that as a diffusive medium seeds in the solution enhances crystal growth by allowing layering of newly formed crystallites onto the surface of the seeds [27], and further improves the phosphorus recovery.

The effects of pH and seed matirial on MAP crystallization were studied in this paper. Experimental results showed that solutionpH was one of the most important factor which effected phosphorus recovery percentage and rate during the struvite forming process. When the value of pH was adjusted from 7.5 to 8.5, phosphorus recovery percentage increased dramatically from 2.59% to 26.50% in the first 2 minutes of the precipitation tests and from 34.00% to 78.85% at the end of experiments respectively.

This study has been ﬁnancially supported by the project of Zhejiang Nature Science Foundation (LY12E08001).