Abstract: Comparing complete animal mitochondrial genome sequences is becoming increasingly common as a model for genome evolution and phylogenetic reconstruction. In the present work, we compare the complete mitochondrial genome sequences of five species of cetaceans and artiodactyls and infer phylogenetic relationships among them. The genome of the taxa contains the 37 genes found in a typical mammalian genome, a general structure that is highly-conserved among species. Phylogenetic trees constructed using MP, ML, and BI methods show a similar topology, and indicate the paraphyly of Artiodactyla, due to the sister-group relationship between the Cetacea and the Hippopotamidae. The study confirms that mitogenomics is a useful tool for research on mammal phylogenetics, but recognizes that increased taxon sampling is still required to resolve existing differences between nuclear and mitochondrial gene trees.

The sequence and structure of mitochondrial (mt) genomes are widely used to provide information on comparative and evolutionary genomics, molecular evolution, gene flow patterns, phylogenetics, and population genetics [1,2]. Several recent analyses have demonstrated that complete mt genomes provide higher levels of support than those based on individual or partial mt genes [3,4,5]. The mammalian mitochondrial genome is a closed-circular, double-stranded DNA molecule about 16.5 kb in length that usually encodes genes for only thirteen protein products, two ribosomal RNAs, and 22 transfer RNAs [6].

Cetartiodactyla is one of the most diversified orders of mammals, with 332 extant species grouped into 132 genera. The members of this taxonomic group were originally divided into two different orders: Artiodactyla and Cetacea [7], but recent literature suggests a close relationship between these two orders based on a host of paleontological [8], morphological [9], and molecular [10,11,12] studies. Molecular data analyses, in particular, indicate that the Cetacea are sisters of the Hippopotamidae [10,13], thus suggesting that all species of Artiodactyla and Cetacea belong to one sole order, called Cetartiodactyla [14]. This order includes all species of Cetacea, Hippopotamidae, Antilocapridae, Bovidae, Cervidae, Giraffidae, Moschidae, Tragulidae, Suidae, Tayassuidae, and Camelidae.

Each one of the five mitochondrial protein-coding genes was compared. The initial and final codons were predicted for 13 protein-coding genes by comparing the amino acid sequences. Ribosomal RNA (rRNA) and transfer RNA (tRNA) genes were also identified by comparison with other complete mitochondrial rRNAs from cetardiodactyls. All comparisons were performed using CLC Genomics Workbench software version 8.0.1 (CLC bio).

The complete mitochondrial genomes were aligned using BioEdit [16], with subsequent visual confirmation. All those regions that showed ambiguity due to the position of the gaps were excluded from the analyses to avoid erroneous hypotheses of primary homology. Thus, the control region was not included in the alignment because of the presence of many ambiguous gaps. The final alignment consisted of 13,813 nucleotide sites (nt).

Phylogenetic reconstructions were obtained under Maximum Parsimony (MP) and Maximum Likelihood (ML) criteria with PAUP* 4.0b10 [17]. Under MP, trees were obtained considering gaps as a fifth state and after a heuristic search with an initial tree obtained via stepwise addition (random input order) of the taxa, followed by complete tree-bisection-reconnection (TBR) branch-swapping. The robustness of the topology was then assessed through bootstrapping [18] after 10,000 replicates. The most appropriate model of nucleotide evolution was selected using ModelTest 3.7 [19]. A heuristic ML search was then conducted using this model. Again, the robustness of the topology was evaluated using bootstrap resampling [18] after 10,000 replicates.

Bayesian phylogenetic analysis (BI) was also performed using MrBayes 3.1.2 [20]. The best-fit model (GTR+I+G) of sequence evolution for Bayesian analysis was obtained by ModelTest 3.7 [19] under the Akaike Information Criterion, with the following parameters: Nst = 6, rates = gamma, Ngen = 6,000,000, frequency = 100, chains = 5. After eliminating the first 20,000 trees as ‘‘burn-in,’’ we constructed a majority-rule consensus tree with Bayesian posterior probabilities for each node.

3.1. Characteristics of the Mitochondrial Genome

The five mitochondrial genomes represent circular, double-stranded DNA molecules that ranged from 16,353 to 16,836 nucleotides and contained the 37 genes, including 22 tRNA genes, two rRNA genes (rrnS and rrnL), 13 protein-coding genes (COX1-3, NAD1-6, NAD4L, cytochrome b and ATP6,8), and a non-coding region (Table 1 and Figure 1). Of these genes, 8 tRNAs and ND6 are encoded by the L-strand, while all others are encoded by the H-strand. Arrangement is the same in all species of cetaceans and artiodactyls, and has been seen to be similar in other mammalian genomes, such as Artibeus jamaicensis bats [21] and Rhinolophus monoceros [22] that, according to [23], are closely related phylogenetically to cetaceans and artiodactyls.

All protein-coding genes of the mtDNA of the five species have a methionine start codon (ATR), except ND3 in H. amphibius (ATT) and ND5 in M. chrysogaster. Also, all present TTA in ND6 and, with the exception of M. chrysogaster, all have GTC in ND4L. Most protein-coding genes appear to be terminated by TAR, though this stop codon is incomplete in various genes, such as ND2, COI, ATP8, ND4L, and ND5.

Overlapping nucleotides between the mt genes of the species examined in this study ranged from 1 to 45 base pairs (bp), (Table 1), the same as in other cetaceans, such as Orcinus orca [24] and artiodactyls like Bison bison [25].

Sequence analyses revealed the presence of two ribosomal RNA genes (rRNA): 12S rRNA and 16S rRNA. The size and arrangement of these genes concur with those of other cetaceans and artiodactyls. The sizes of the 12S rRNA and 16S rRNA were similar in all species, with a range of 951-974 and 1565-1576, respectively. The 12S rRNA gene is located between tRNAPhe and tRNAVal while the 16S rRNA gene is between tRNAVal and tRNALeu.

Non-coding regions were also identified, including the origin of the replication of the light strand (OL) and control region, which is important for the replication and maintenance of the mt-genome [26]. The OL region was identified between tRNAAsn and tRNACys, and varied from 32 bp to 37 bp, similar to such bat species as Corynorhinus rafinesquii, Lasiurus borealis and Artibeus lituratus [27]. The sequence lengths of the control region, meanwhile, presented a slight variation in the five species, of 916-959 bp. This region exhibited higher AT than GC content, similar to other metazoans [28]. The highest amounts of GC were determined to be 41.2% for H. amphibius and 38.6% for B. musculus.

Table 1. Characteristics of the mitochondrial genome in two species of cetaceans and three species of artiodactyls. 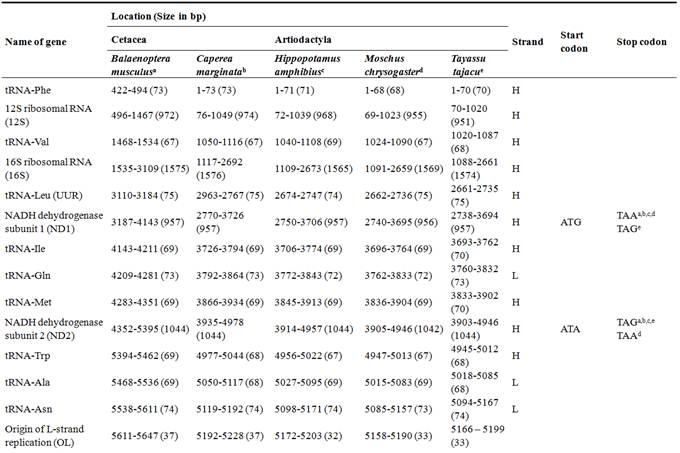 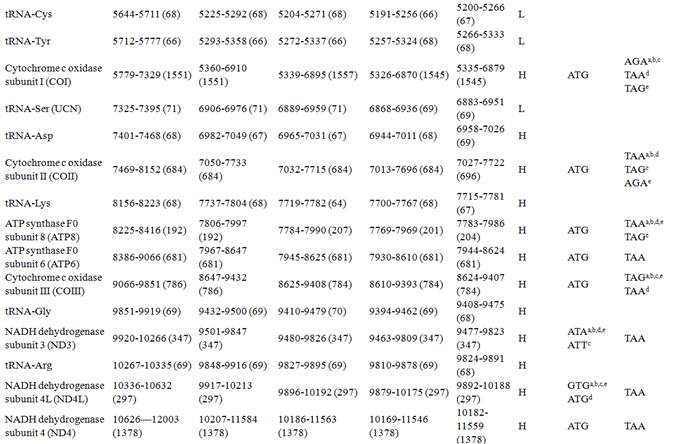 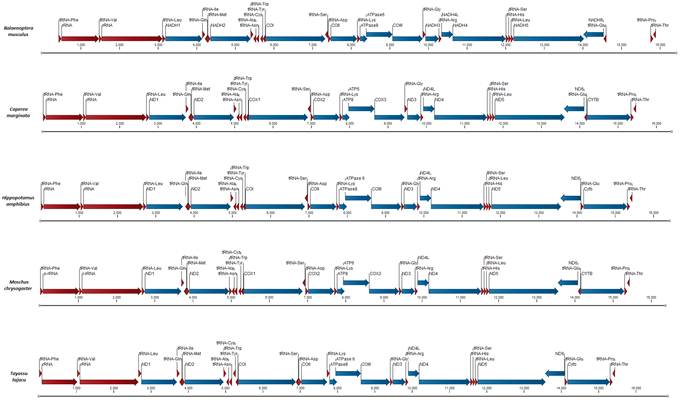 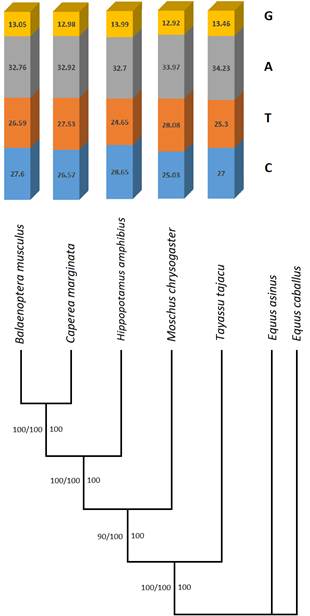 Figure 2. Phylogenetic relationship of species of cetaceans and artiodactyls based on 13,813 nucleotides using MP, ML, BI analysis. Numbers below the line indicate the posterior probabilities of the nodes in the Bayesian inference analysis; numbers above the line are the bootstrap values of the nodes in the ML or ML/MP analyses, after 1,000 replicates. Color online: overall base composition of the mitochondrial genome of the species of cetaceans and artiodactyls.

Maximum Parsimony, Maximum Likelihood and Bayesian phylogenetic analyses based on an alignment of 13,813 bp resulted in a robust tree (Figure 2) with high bootstrap values that support (100%) interspecific relationships. Results indicate the paraphyly of Artiodactyla due to the sister-group relationship between Cetacea and Hippopotamidae. According to [12], these relationships formed the Whippomorpha group. Moreover, they are in full agreement with recent works that suggest a close assembly between Artiodactyla and Cetacea based on a host of paleontological [8], morphological [9], and molecular [10,11,12] studies. To render taxonomy compatible with this phylogeny, Montgelard et al. [14] proposed placing all species of Artiodactyla and Cetacea in the same order, called Cetartiodactyla.

Genetic distances based on the evolutionary model selected by ModelTest were lower among the species of cetaceans (12.1%) than among the artiodactyls (22.5-23.3%). These latter values were similar to those seen in the between-taxa comparisons of the two orders (22.0-24.8%). These results provide a reasonable basis of support for mitogenomic relationships within Cetartiodactyla. Although anatomists had strongly claimed the monophyly of Artiodactyla for 150 years, it has been identified in all extant terrestrial cetartiodactyls and Eocene whales, a common ancestor of Cetartiodactyla that exhibits a double-pulley astragalus and a paraxonic foot [29].

This study presents the first comparison of entire mitochondrial genomes for various cetaceans and artiodactyls while also providing support for the notion that mitogenomics is a powerful tool for investigating genome evolution and phylogenetic relationships in mammals and suggesting that the general structure among species of cetaceans and artiodactyls is highly-conserved. Finally, the comparison of phylogenetic results requires the use of biparental inherited nuclear markers (i.e., introns).