Abstract: In this paper, to investigate the tolerance of some cowpea genotypes to imazaquin, seeds of 30 cowpea genotypes were treated with imazaquin at 0.06 kg active ingredient ha-1 and control were treated with distilled water. Treated seeds were planted in plastic pots and raised for 3 weeks in a green house. Samples leaves were detached for DNA isolation at 2 weeks after sowing. Phenotypic result revealed that Hen-me and Hodi were the most tolerant (with 12.5% mortality rate) to imazaquin while Maptwapa and many others (with 100% mortality rate) were highly sensitive to imazaquin. However, there were no sequences differences between tolerant and sensitive genotypes in amplified region of the annotated portion of AHAS (acetohydroxy-acid synthase) from cowpea. It can be concluded that the major significant difference between imazaquin tolerance and sensitive cowpea is as a result of rapid metabolic detoxification of herbicides in tolerant cowpea. It is therefore imperative that enzymology involve in the differential metabolism of this herbicide in this crop needs urgent and necessary attention.

Cowpea (Vigna unguiculata L. Walp) is one of the most important grain legume crop grown in sub-Saharan Africa. Apart from its nutritional importance, it is also an important component in modern and traditional cropping systems [1]. It is widely use in crop rotation and intercropping with many cereals because of its nitrogen fixing ability. Almost all parts of the crop are useful. The seeds are used for human consumption while the haulm (stems and leaves) as animals feed [2]. The young pods and leaves are used as vegetables. Its ability to tolerate drought and do well under poor soil conditions, makes it a desirable crop in savanna ecology. Elsewhere cowpea is grown as cash a crop.

Imazaquin belongs to imidazolinones group of herbicides for broadleaf and grass weed control in soybean [3]. It can be applied as pre-plant incorporated, pre-emergence or post-emergence [4]. It is readily absorbed by root, foliage and rapidly translocated throughout the plant via xylem and phloem with accumulation in the meristmatic tissue. Imazaquin is well characterized in some species [like Arbidopsis] [5] and attributed to specific base pair changes in acetohydroxy-acid synthase [AHAS] gene. Some cowpea genomic sequence is becoming available [6,7] it will be of great interest to know if any mutations could be found between imazaquin tolerant and sensitive cowpea accessions.

Herbicide tolerance is the ability of the plant to grow and reproduce after herbicide application. Opinions differ on the basis of imazaquin tolerance in soybean. Tolerance of imazaquin to soybean may be due to rapid metabolism and degradation of the herbicide by the crop [8,9]. Herbicide absorption and translocation may play minor role in imazaquin selectivity among some species [10]. Changes in coding sequence result in altering acetohydroxy-acid synthase (AHAS) enzymes which is the site of action of the herbicide may also result to imazaquin tolerance [11]. The phytotoxicity caused by imazaquin is due to inhibition of AHAS enzyme [3,4,9,10,11,12]. AHAS is an enzyme that is involve in synthesis of branched-chain amino acid; isoleucine, leucine and valine. Imazaquin binds to the enzyme, causing dysfunction of the enzyme and reducing the synthesis of isoleucine, leucine and valine that are necessary for protein synthesis. Plants resistant to acetolactate synthase (ALS) inhibiting herbicides have altered AHAS to which the herbicide does not bind [13]. Key amino acid residues within the coding site of the enzyme can protect it from imazaquin. AHAS from two lines of maize showed different spectra of herbicide tolerance compared with AHAS from sensitive maize [14]. Tolerance of cowpea to imazethapyr was due to an insensitive site of action, since extractable AHAS activity was reduced after imazethapyr application [10]. Herbicide tolerance is undesirable among weeds but desirable among crops.   Herbicide tolerant crops offer a good opportunity for a farmer to control weeds. This is because of sufficient margin of selectivity between the crops and weeds such that the crop is not injured by the herbicides [15]. This gave way for new approach to herbicidal control of parasitic weed by treating the seeds of herbicide tolerant crops with a herbicide to control the obligate parasite. Use of herbicide seed treatments for parasitic weed control was first reported on cowpea in the year 1994 [16]. An ALS-inhibiting herbicidal seeds treatment was used to control Striga hermonthica in ALS-modified corn [16,17,18,19]. Potentials of cinosulfuron and CGA152005 seed treatments for control of Striga hermonthica in upland rice was well documented [20]. In sorghum, seed treatments with acetolactate synthase (ALS) herbicide had successfully reduced Striga attachment to the host sorghum [15]. Herbicide seed treatments have become an important component of integrated weed management option. Identifying imazaquin tolerant cowpea can be an important land mark in the struggle to control Striga which is the most important biotic constraint to cowpea production in sub-Saharan Africa [21]. The goal was to identify imazaquin tolerant cowpea accessions and to attempt to characterize the molecular basis of such tolerance by comparing genomic sequence of annotated gene fragments of cowpea AHAS. Such information could be useful for developing imazaquin seed treatments for the control of Striga and other weeds in cowpea.

2.1. Phenotyping of Cowpea for Imazaquin Tolerance

Table 1 provides the list of cowpea genotypes used in this study. They were obtained from US Department of Agriculture. Their seeds were imbibed with imazaquin at 0.06 kg active ingredient ha-1 while the control was treated with distilled water. They were planted in a mixture of soils and compost and grown in the green house of the Department of Agronomy, Purdue University West Lafayette, Indiana USA. Data were taken on number of stands per pots at 3 weeks after sowing. Mortality rate of herbicide treated genotypes were calculated as (Number of survived stand per pot at 3 weeks/ Number of planted seeds per pot) X 100. Genotypes that recorded 70% (>30% mortality rate) and above survival rates are considered as tolerant while less than 50% (> 50%) are considered as sensitive. Young leaves from two week old plants were harvested and stored at -80oC until used for DNA isolation.

Total DNA was isolated from the leaf tissues using DNA extraction kit (QIAGEN, USA) according to the manufacturer’s protocol. The isolated DNA was dried at room temperature for 1 hour, dissolved in 100 µl and quantified with spectrophotometer ND-100 (Themo scientific, wilmigton DE, USA) and stored at 4°C.

The primers were synthesized by IDT Integrated Technologies, USA. The name of primers and their nucleotide sequences and sizes are presented in Table 2. The primers were screened for their ability to detect polymorphisms between tolerance and sensitive genotypes. Extracted DNA samples of Hen-me and Hodi were used as imazaquin tolerant while TVU 1778 and TVU 1802 were considered as sensitive genotypes.

Both forward and reverse primers were diluted with water base on their weight. 10 µl of each primer solution was pipeted and diluted with 90 µl of distilled water. 1.5 µl each of forward and reverse primers was pipeted and mixed with 1.0 µl of extracted DNA solution and 21 µl of MangoMix (Bioline) in 0.2 ml PCR tube to make reaction volume of 25 µl.

The PCR tubes were loaded on to thermo cycler and runs for 35 circles of 30 seconds at 94°C, 35 seconds at 55° and 1.30mn at 72°C for complete 2 hours. 10 µl of amplified PCR product were resolved on 5% agarose gel using 0.5 x TBE containing Gel red with horizontal electrophoresis apparatus at 60 V for 2 hours. The gel was photographed using UV transillumination. The size of DNA bands in base pairs was determined using 1 kb ladder as standard marker. Four primers pairs were used to amplify DNA samples of sensitive and tolerant cowpea genotypes.

Based on percentage plant mortality, there were some differences in genotypic response to imazaquin tolerance at 3 weeks after sowing (Figure 1). Genotypes Hen-me and Hodi were the most tolerant with 12.5% mortality rate each. Matwapa 1 & 2, TVU 1392, TVU 1773 and many others were among the most sensitive genotypes with 100% mortality rate. Other genotypes exhibit low to intermediate level of tolerance.

Figure 3 showed the amplified region of the cowpea AHAS annotated by CGKB. No polymorphisms were seen in this region between imazaquin tolerant and sensitive accessions.

Table 2. List of PCR Primers used Showing the Nucleotide Sequence and the Sizes. 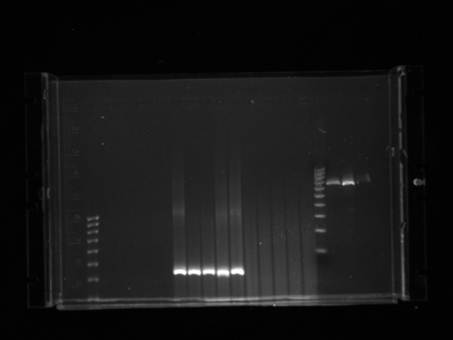 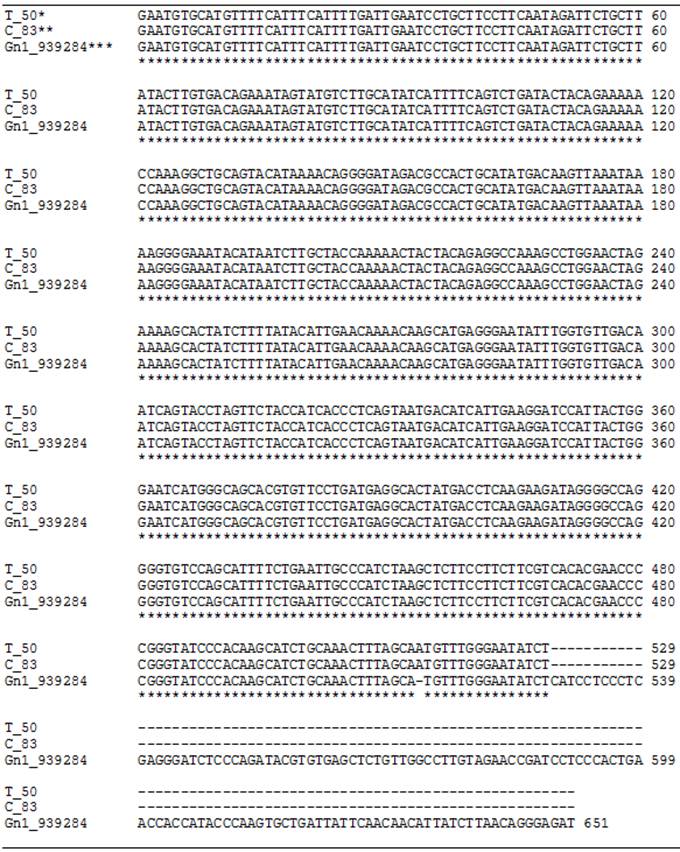 Absence of polymorphism between imazaquin tolerant and sensitive cowpea genotypes suggested that tolerance may not be due to inhibition of AHAS enzyme. It was earlier reported that imazaquin tolerance in soybean was due to changes in coding sequence resulting in altering AHAS (acetohydroxy-acid synthase) enzymes which is the site of action of the herbicide [5]. It was also noted that differential target site sensitivity is not the bases of soybean tolerance to imazaquin since AHAS from soybean and other sensitive plant are equally sensitive to herbicide [14]. The absent of sequences in amplified region of the annotated portion of AHAS enzyme from cowpea could also be attributed to fact that the genes may belong to the same family or they are the same genes but deposited with different name.  It may be possible that there may be difference elsewhere in the gene outside the amplified region. For example, from bp 518 to bp 651 were not amplified by the primers, it is possible that there could a nucleotide polymorphism within these unamplified regions of the DNA.

Tolerance of Hen-me, Hodi, TVU 1542, TVU 1908 and t318 to imazaquin (base on phenotype) could   be attributed to gradual metabolism of the herbicide. It has been reported that plants differ in their ability to compensate for the damaging effects of the herbicide with no physiological mechanism involved [22]. The differences in tolerance to imazquin among plants species are caused by variations in the rate of metabolism of the parent herbicide [3]. Some soybean cultivars have displayed differential tolerance to imazaquin [23]. Selectivity of imazaquin to soybean was reported to be due to rapid metabolism and degradation of the herbicide by soybean plant [9]. Susceptible plants are either unable to metabolized the herbicide or rate of metabolism is very low. Crop tolerance to herbicides can also result from such factors as reduced absorption and translocation. Differential target site sensitivity may therefore not be the only basis for cowpea tolerant to imazaquin since there is no sequences difference in amplified region of the annotated portion of AHAS cowpea. It is possible that changes in coding sequence of AHAS enzymes play a significant role in herbicide resistance (which is inherited ability of plant to survive and reproduce following exposure to a dose of herbicide that would normally be lethal to the wild type) but not tolerance.

It can be concluded that the major significant difference between imazaquin tolerance and sensitive cowpea is as a result of rapid metabolic detoxification of herbicides in tolerant cowpea. It is therefore imperative that enzymology involve in the differential metabolism of this herbicide in this crop needs urgent and necessary attention.