Abstract: Esophageal cancer, including Squamous Cell Carcinoma and Adenocarcinoma, is one of the most common causes of cancer and cancer death globally, with China alone accounting for about half of the new cases worldwide in 2012. In this study we analyzed the presence of human papilloma virus (HPV) DNA and Tp53 mutations in 52 cancer patients, including 26 Squamous Cell Carcinoma cases, 21 Adenocarcinomas and 5 of non-described histology from Tangshan China. Overall 44 patients were positive for HPV L1 consensus, 28 were positive for HPV16 and 34 for HPV18 (84.62%, 53.82% and 65.38% respectively); 23 samples (44.23%) were positive for both HPV16 and HPV 18. We detected however a very low rate of Tp53 mutations in exons 5 through 8, which may possible be related to the elevated percentage of high risk HPV. Our findings corroborate our previous study on Esophageal Squamous Cell carcinoma in the same area but a further analysis on other Tp53 exons polymorphisms are necessary to understand the reason behind the low level of Tp53 mutations we reported.

Esophageal cancer (EC), including Squamous Cell Carcinoma (ESCC) and Adenocarcinoma (AC), is the eighth most common cancer worldwide, and the sixth most common cause of cancer death [1]. While the prognosis remains poor, the incidence rate has increased [2] with an estimated 456,000 new cases and 400,000 deaths in 2012 [1].

The incidence rate varies greatly worldwide with about 80% of new cases occurring in less developed countries, mainly Southern Africa and the "esophageal cancer belt" area which extends from Eastern Central Asia to the Middle East [3-5]. Of these areas, China alone accounted for about half of the new ESSC cases worldwide in 2012 [3], with an incidence rate of 22.4/100000 and a mortality rate of 16.77/100000 [6]. The etiology of both histological types is thought to be multifactorial with a number of etiological agents such as, environmental and dietary factors, genetic alterations and infection agents believed to be implicated. One of the genetic alterations associated with EC carcinogenesis is the disruption of the tumor suppressor gene Tp53. The dysfunction of Tp53 is a hallmark of human cancers and is mainly caused by somatic missense mutations, that occur primarily in the DNA biding domain [8,9], leading to the accumulation of mutant Tp53 protein. These mutations have been shown to occur in at least 50% of esophageal cancer cases and have been detected in both ESCC and EAC [10-13].

Tp53 regulatory function can also be suppressed by the activities of Human papilloma virus (HPV) E6 onco-protein which induces p53 degradation by forming a trimeric complex with p53 and the cellular E3 ubiquitin ligase E6-associated protein (E6AP), that leads to the ubiquitination and proteasomal degradation of Tp53 [14,15]. Although the association between HPV and ESCC has been observed since 1982 by Syrjanen [16], the role of HPV in the carcinogenesis of EC remains unclear. However, in a 2013 meta-analysis study, comparing the results of 21 case-control studies, concluded that HPV DNA was present in 35% of the ESCC samples and that HPV increases the risk of HPV three-fold [17].

Previous studies in China have demonstrated a high prevalence of Tp53 mutations, while results on HPV prevalence have been contradictory, with some scoring very high prevalence and others concluding a small role for HPV in EC carcinogenesis [18-21]. Additionally, these studies have focused mostly on ESCC, and HPV prevalence on Chinese AC patients has been poorly addressed.

In this study we aim to evaluate the prevalence of HPV DNA and Tp53 point mutations in both ESCC and AC patients from Tangshan, China, an area previously reported by our group as having a high prevalence of high risk HPV types 16 and 18.

FFPE tissue blocks from esophageal cancer patients specimens were obtained from a pathology department in Tangshan, China from 2007 to 2011. In total 52 samples were used in our study: 26 ESCC, 21 AC and 5 of non-described histology. Histological types, gender and age of patients were also provided by the department.

DNA extraction from FFPE the tissue blocks was performed as per our usual laboratory procedure previously described in Mehryar et al [22].

PCR amplification of exons 5 through 8, was performed according to the 2010 update of the IARC protocol. Primers and PCR conditions are described in detail and are available on the Tp53 IARC database website: http://p53.iarc.fr /Download/Tp53_DirectSequencing_IARC.pdf. The PCR mix was made, however, with Takara Ex Taq® (Mg2+ free buffer) kit for exons, 5, 6, and 8 and Takara Ex Taq® Hot Start PCR kit for exon 7. Samples were analyzed by bidirectional sequencing and results were compared by DNAMAN software with the reference sequence NC_000017-9 from http://p53.iarc.fr/Tp53Sequence_ NC_00 0017-9.aspx. Codon order and amino acid sequence were also compared with the sequence provided by the IARC database [24].

For demographic analysis, only samples with known histological origin were used totaling 47 patients (26 ESCC and 21 AC). The patients were separated per each histological type according to gender and age. A total of 38 (81%) patients were men and only 9 (19%) were women. The same pattern is observed when analyzing both histological types separately with ESCC scoring 21 (80.8%) men vs. 5 (19.2%) women and AC patients scoring 17 (81%) men vs. 4 (19%) women. 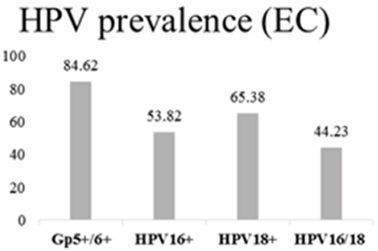 Figure 1. Percentage of HPV viral DNA prevalence in all samples. 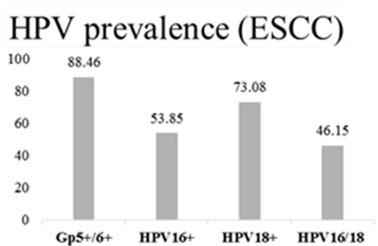 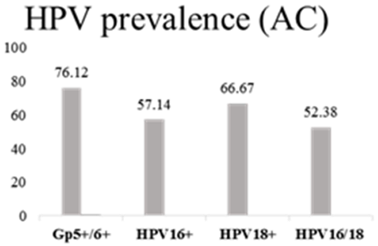 China has one of the world’s largest numbers of esophageal cancer cases and many studies have been carried out to understand the factors behind the high incidence rate and the role of HPV infection and mutations in the Tp53 gene. The presence of HPV DNA in ESCC has been highly controversial with studies reporting very different levels of HPV prevalence. [18-21]. Even samples from the same area or same laboratory may report conflicting results [21]. Detection methodology differences may be at bottom of this discrepancy, and PCR based detection is advised since it’s considered a more sensitive method.

In addition, Guo et al. noted that HPV copy number in esophageal cancer specimens was at least 2 orders of magnitude lower than that in cervical cancer and, in order to avoid, false low levels of detection, L1 PCR should be performed twice [21].

Following this suggestion we observed on our lab a high prevalence of HPV DNA, in this study. These results are consistent with a 2015 meta-analysis of Chinese case-control studies that highlighted more than a six fold increased risk of esophageal cancer in the presence of HPV 16 infection [25].

These studies have, however, been primarily focused on ESCC, since it’s the most common histological type of EC and HPV 16. In this study we analyzed samples on both ESCC and AC origin to determine the prevalence high risk HPV16 and 18.

It is important to note that, our study was limited to exons 5 to 8, since they contain about 90% of known dysfunctional Tp53 mutations, and we cannot exclude the possibility of mutational events in the other exons of the gene, Other limitations we encountered included the lack of detailed information regarding other risk factors such as alcohol and tobacco consumption, dietary habits and economical background that are implicated in esophageal cancer carcinogenesis.

In summary, our results show, that the role of HPV infection in the development of esophageal carcinomas of different histological type, cannot be disregarded and so, preventive measures such as HPV screening and improving vaccination policies using either the quadrivalent Gardasil vaccine that targets HPV6, 11, 16 and 18 or the bivalent Cervarix vaccine that targets HPV16 and 18, could be beneficial in addressing the high incidence of esophageal carcinoma.

The results presented in this study corroborate our previous observations of an elevated presence of HPV viral DNA in Tangshan patients and are also in accordance with other studies that have indicated that high risk HPVs may play a role in esophageal cancer in China. It is then advisable to consider HPV preventions measurements as possible elements in addressing the high rates of the malignancy in China.

Our data did not concur however with previous studies on Tp53 mutation in the country. This might be due to a high level of HPV infection however we cannot rule out the limitations in our own study. In the future a further analysis of Tp53 mutation in different exons and polymorphisms in the gene may provide a better clue as to the low prevalence we have reported here.

This study was supported by the following grants: