Abstract: Neural tube defects (NTDs) are severe congenital malformations of central nervous system that have high prevalence with severe consequences. The etiology of NTDs involves interactions of both genetic and epigenetic factors and their complex interactions with stems cells during organogenesis. Despite of recent advances, there has been limited progress in delineating the molecular basis of NTDs that can pave way for prevention, diagnostics and therapeutics. We have previously identified a role for stem cell markers Oct 4, Sox 2 and Nanog 3 in neural tube defect affected pregnancies. In the present report we identified mutations in stem cell pluripotency markers from amniotic fluid derived stem cells isolated from women with NTD affected pregnancy. Oct 4 and Nanog 3 were studied to find a correlation with the disease and its severity. Interestingly, sequence based DNA analysis revealed two different forms of nucleotide changes that were observed in different clinical conditions of NTDs. The mutation in Oct 4 at position 183 G→T and in the sequence of Nanog 3 at 63CAAAAA ACA72 to 38ACAGTCTCT47 appearsin the cases of anencephaly and meningomyelocele respectively in comparison to control. These findings suggest that these mutational spectra might be responsible for the alterations in the developmental process during embryogenesis leading to NTDs.

Neural tube defects (NTDs) are severe congenital malformations of central nervous system having high prevalence of birth defect. NTDs occur due to defect in the process of neurulation. Although, the etiopathology of NTDs has not been clearly defined, it involves complex interactions between genetics and stem cells during organogenesis [1-4]. Despite of recent advances, there has been limited progress in delineating the molecular basis underlying most human NTDs that can pave way for prevention, diagnostics and therapeutics. In human, Oct 4, Nanog 3, and Sox 2 genes are the key regulators of transcrip­tional activity during organogenesis. Studies have suggested that Oct 4, Nanog 3, and Sox 2 are required to maintain pluripotency for neuronal differentiation and play a major role on brain development [5-6]. However, genetic diversity of stem cells in NTDs and maintenance of pluripotency still require a comprehensive study that include sequential use of stem cell markers - Oct 4, Nanog 3, and Sox 2. Since stem cells play a crucial role in development of brain and potential target for regenerative medicine; there is a considerable interest in determining how genetic components of stem cell diversity may be used as a "marker" for regenerative source of medicine along with their use as a diagnostic marker to determine severity of disease and risk factors. However, our efforts has been continued to gain new insight in the understanding of the developmental process involving genetic and epigenetic factors regulating folding of neural tube during organogenesis. In this regard, we previously identified chromosomal abnormalities in the affected pregnancies having a variety of NTDs [7]. Further, our group for the first time demonstrated genetic heterogeneity of stem cells in clinically diagnosed NTDs and their correlation with the severity of the disease [8]. These findings generated further curiosity to understand the role of stem cell gene mutations in the cases of anencephaly and meningomyelocele to explore the etiopathology of "birth defect". Thus, present study was undertaken to find out nucleotide changes (mutation) in stem cell markers namely Oct 4 and Nanog 3 based on the study of DNA sequencing analysis from amniotic fluid collected from the mothers having tendency of NTDs. 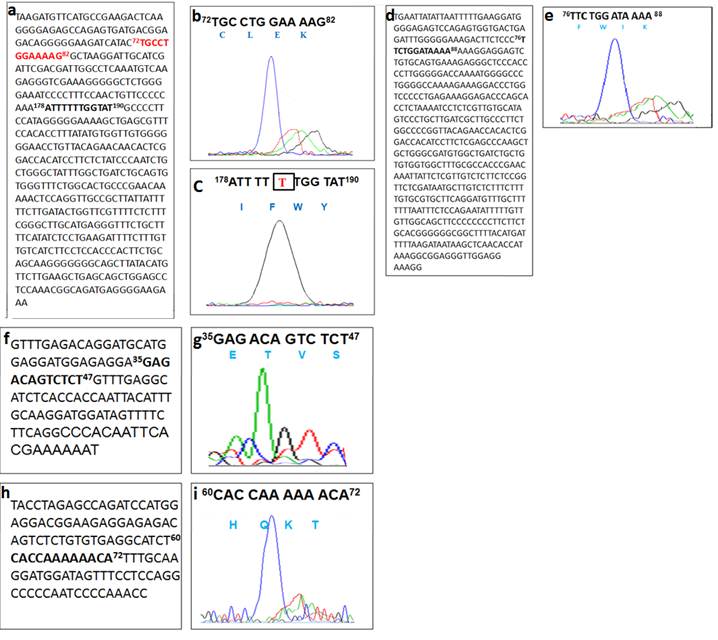 Amniotic fluid was drawn under sterile conditions from the mothers during second trimester having pregnancy with the cases of anencephaly or meningomyelocele after confirmation by ultrasound guidance. Amniotic fluid drawn from unaffected pregnancies acted as controls. All the procedures were performed after informed consent from the family members along with consideration of their right to privacy. The cells collected from amniotic fluid were washed in sterile phosphate buffer saline (pH 7.4) and were counted using haemocytometer and ~2 x 104/ml were plated into 35mm2 flasks (Nunc, USA) containing Minimum Essential Media (Gibco, USA) with Fetal Bovine Serum (15%), L-glutamine, Sodium pyruvate and antibiotics. The cells were maintained in 5% CO2 incubator at 37°C till confluence was attained. Cells were scraped and RNA was isolated using Trizol reagent (Invitrogen, USA) as described earlier [8]. Complementary DNA was prepared with reverse transcriptase enzyme (200 unit) for characterization of gene expression of Oct 4, Nanog 3 and Sox 2 by reverse transcription polymerase chain reaction. The identification and characterization of stem cells namely Oct 4, Nanog 3, and Sox 2 gene markers was performed using forward and reverse primers as described earlier [8]. Briefly, the PCR reaction was performed in a total volume of 25 μL containing 50-100 ng DNA, 20 pmol of each primer, 200 μM of each dNTP with Taq buffer (10 mM Tris-HCl, pH 8.3, 50 mM KCl), 3.0 mM MgCl2, and 3 U Taq polymerase (New England Biolabs). Cycling conditions were 1 min for Oct 4 (577 bp), 4 min for Nanog 3, and 2 min for Sox 2 at 94°C for initial denaturation, 60°C/ 1 min, 56°C/30 s and 60°C/30 s of annealing for Oct 4, Nanog 3, and Sox 2, respectively, followed by a final extension of 35 cycles at 72°C for 5 min for all 3 stem cell markers used. PCR products were separated on 1.5% agarose gel, stained with ethidium bromide and bands were visualized on the Gel Doc system (SR Biosystem). PCR products were purified using QI Aquick purification kit (Qiagen, CA) before nucleotide sequencing by Sanger's methods. The data of nucleotide sequences were analyzed using sequence analysis software 3.4.1 on Mac OS.9.1. between cases and controls. Statistical analysis was carried out using the χ2 test for comparison of controls and NTD patients to determine the level of significance.

The findings of the present study are quite relevant in relation with "Birth Defects". Stem cell (gene expression) was analysed by performing RT-PCR for Oct 4, Sox 2 and Nanog 3 in two different category (n=6) of NTDs i.e. anencephaly and meningomyelocele. Our findings reveals significant association in Oct 4 in the case of anencephaly and Nanog 3 in meningomyelocele (data not shown). Sox 2 shows lack of significant association (expression) in the case of anencephaly as well as meningomyelocele. Therefore, curiosity has been generated to analyse spectrum of mutation in Oct 4 and Nanog 3 based on sequencing in these two cases (anencephaly & meningomyelocele) with controls. Interestingly, DNA sequencing analysis revealed a substitution of base pair at 183 position G→T in Oct 4 considered as a "novel" point mutation within the open reading frame which was localized inside the highly conserved DNA binding motif in the homeobox region and resulting in conversion of amino acid phenylalanine to tyrosine in the case of anencephaly (Fig. 1a-c) with respect to control (Fig. 1d-e). Furthermore, the changes in nucleotide sequences of Nanog 3 at position 63CAA AAA ACA72 to 38ACAGTCTCT47 was also observed in the case of meningomyelocele (Fig. 1f-i). However, such changes in stem cells pluripotency genes (Oct 4/Nanog 3) have not been clearly defined during organogenesis in human being. The present finding suggests an alteration at the levels of Oct 4 and Nanog 3 in the neural tube defect affected pregnancies might be responsible for altered functioning of stem cell during early embryogenesis. Moreover the changes of nucleotide in the Oct 4 and Nanog 3 might have played a role in the altered expression levels and thereby failure to maintain a balance between pluripotency and differentiation leading to NTD. The variation in nucleotide sequences of Oct 4 and Nanog 3 might be due to two different clinical pathologies of the cases. Earlier studies have suggested a role for Oct 4 and their family during early embryonic development and may play a role in neural tube formation [9-10]. Furthermore, it was identified that Oct 4 is required to maintain cell viability in the embryo and normal proliferation within the primitive streak in mouse embryos [11]. Similarly, role for Nanog and their isoforms have been identified during embryonic development, neuronal tube formation and clinical conditions [12-14].

Overall, the present study further strengthens our earlier findings [8] and provides insight into the possible role for Oct 4 and Nanog 3 in regulating neural tube formation during neurogenesis. Of interest, present study opens the possibility for the use of Oct 4 and Nanog 3 as a marker for identification of neural tube defect and correlation with the severity of the disease however needs further verification. These studies will facilitate clinicians to determine the severity of disease and also becomes a potential tool for regenerative medicine in stem cell therapy. In conclusion present findings paves the way for the next phase of research that include: (i) large sample size to detect significant associations between stem cell and as diagnostic marker with severity of disease, and (ii) further use of genomics to evaluate the copy number variants in birth defects.

Research supported by the Department of Biotechnology, Ministry of Science & Technology, Government of India (grant #BT/PR/9022/MED/12/331/2007). We are grateful to the patients and their family members who participated in this study.