Abstract: Acacia senegal var. senegal (Gum Arabic) as it is known world-wide, is one of the most important trees in Sudan with valuable contribution to the national income export commodity. Gum Arabic is an important ingridunt in several medicinal and food products. Little is known on the genetic markers and diversity of Acacia senegal. To our knowledge, this is the first study represents attempt to characterize genotypic variability of Acacia senegal var. senegal. The aim of this study was the molecular characterization of Acacia senegal var senegal using RAPD technique as molecular marker and to correlate the results obtained from genetic marker with the production and the geographical distribution of the trees. Acacia seeds were collected from different geographical areas of Sudan. Seeds of trees Acacia senegal var. senegal were cultivated in small pots. The seeds were germinated for 4 to 6 weeks then the new leaves were collected for DNA extraction using CTAB protocol. DNA was also extracted from the roots. Two octamer RAPD primers were evaluated for amplification of Acacia DNA. Phylogenetic tree was constructed based on RAPD-PCR which clustered the trees from each geographic area as separate group that were genetically related. The data showed a common ancestor of the three clusters suggesting.

A shrub or tree usually 2-15 m high, rarely smaller bark on trunk yellowish to grey or greyish-brown, rough or smooth and papery and peeling off crown variable, loose and rounded to dense and flattened. Acacia senegal var. senegal is a pioneer nitrogen-fixing tree mainly grown for production of gum Arabic for fuel wood fodder, rope and also used for improvement of the soil. Leaves and pods are browsed by sheep, goats, camels, impala, and giraffe. Acacia senegal var. senegal is widely spread in tropical Africa from Senegal in the west to Ethiopia and Somalia in the north-east, South wards to Natal; also it extends into India. Today the tree is native only in Sudan. It is most common in areas with 300-400mm rain/year but can grow in areas with as little as100 mm, and a dry period of 8-11 months. Altitude range of 100-170 m. It is drought-resistant and tolerant to high temperature but sensitive to frost. The tree prefers well-drained sandy soil and it can grow on slightly loamy sandy soils. Acacia senegal (L.) Willd. is one of the most important tree species in Africa, and the species distribution area occupies more than 50% of the sub-Saharian regions in Africa [1].

Although A. senegal has been known since the eighteenth century and is an economically important species as the source of gum Arabic, its delineation has presented constant difficulty and is not altogether clear even today. The species of Acacia are those most similar to and likely to be confused with A. senegal. Acacia senegal var. senegal is Sudanese national wealth. Gum Arabic forms one of the most important Sudanese export commodities. Sudan is at the lead in both production and export of gum Arabic, accounting for about 80% of the world exports of this commodity. Gum Arabic is produced in the Sudan within Gum Arabic belt which covers about 20% of the country area, where it forms a major source of income to farmers in Kordofan, Darfur and eastern Sudan. No data is available about the DNA finger prints of Acacia senegal var. senegal, and no genomic markers are available to document the ownership of the tree.

The current study stresses the importance of using DNA markers in assessing the mating system and the relationship within and among families as part of the estimation of quantitative genetic parameters to support breeding activities in A. senegal. [2]. In genetic improvement, it is essential to estimate heritability and phenotypic variability for different traits to make successful decisions in breeding strategies. Earlier efforts regarding genetic improvement of African species have resulted in establishment of provenance trials and studies of germplasm using molecular markers, but studies on heritability estimates for gum production and fruit traits for major Sahelian tree species are basically absent [3]. 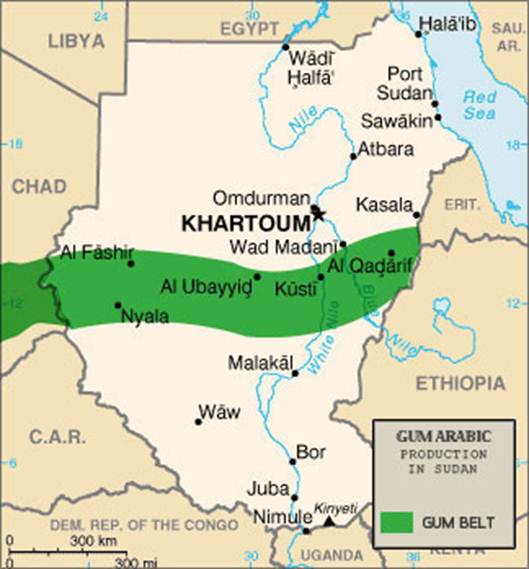 CTAB (2% CTAB - cetyitrimethylammonium bromide) method was used for DNA extraction [4]. New, fresh and healthy leaves were used, then 0.2 g for fresh tissue were placed in a mortar and grinding by using 10 ml of preheated (60°C) 2X CTAB buffer for 30 min. Six and half ml of 24:1 Chloroform: Isomylacohol was added, and the mixture was incubated on a shaking water bath (60°C) and thorough mixing for 10 min. The solution was transferred carefully to the tube and centrifuged at 3000 rpm for 25 min. The aqueous phase was transferred with a pipette into another tube. 2/3 volume of cold 2-Propanol was added and covered with parafilm, mixed gently to precipitate the nucleic acids, then incubated in freezer for 30 min. The extract was centrifuged at 3000 rpm for 5 min. The supernatant was decanted and 5 ml of cold washing buffer (76% ethanol + 10 mM ammonium acetate) was added, and centrifuged 3000 rpm for 5 min. The supernatant was dissolved and the pellet was dried for 10 min. DNA pellet was dissolved in 0.5 ml of TE buffer overnight at 40°C. The suspension was centrifuged for 10 min at 10.000 rpm in a microfuge, and transferred it to another microfuge tube (stock sample).

The same method used for DNA extraction from the leaves was used to extract DNA from 0.2 mg of fresh small roots of Acacia senegal var. senegal.

The products were fractionated on a 1.0% agarose gel using 1X TBE buffer containing 10 mg/mL ethidium bromide and were visualized under UV light, and the gels were photographed using a UV gel documentation system [5]. DNA marker (100 bp) was used for determination of the size of the amplified fragment.

2.5. Measurement of DNA Purity and Quality

DNA concentrations were measured by running aliquots on 0.8% agarose gel and by reading absorbance at 260 nm with a spectrophotometer. The DNA samples were stored at -20°C until further use [5].

The PCR mixture consisted of 10.7 µL H2O for injection, 3 µL PCR buffer, 2.5 µL dNTPs (A-G-T-C), 1 µL RAPD Primer, 2.5 µL KCl, 0.3 µL Triton, 1 µL Taq and 4 µL DNA. Each PCR tube contented 25 µL of the mixture overlayed with 25 µL of mineral oil to avoid evaporation. After that it was put in the PCR machine (Bugss-an original Perkin Elmer 480 machine circa 1988), which programmed in file 48 for RAPD denaturation 94°C for 1minute followed by 30 cycles of 94°C for 30 s, annealing 34°C for 1 minute and extension 72°C for1 minute followed by final extention at 72 °C for 10 minute for 5 hours. The PCR products were fractionated on a 1.0% agarose gel using 1X TBE buffer containing 10 mg/mL ethidium bromide and were visualized under UV light, and the gels were photographed using a UV gel documentation system.

A 100bp ladder plus marker was used as a molecular weight Standard. Each set of PCR products included with the negative control to ensure that the observed banding pattern was reproducible, repeatable and uncontaminated before scoring.

Data was scored by the presence or absence of the band (I\0) [7]. Genetic distance was calculated using RAP Distance program. Neighbour-joining tree was created from the RAPD data [8]. Phylogenetic trees were constructed using PAUP software.

DNA was extracted from 130 tree samples; from germinating seeds. Genomic DNA was successfully extracted and observed to have sharp band. The clear band and purity of DNA was obtained. Extraction of DNA from samples is the first step for all molecular marker types. DNA can be extracted either from fresh or dried samples but to have good quality DNA, fresh material is recommended [9]. There are difficulties to get plant DNA free from contaminating protein and polysaccharides. According to this we choose the method for extraction. The DNA extracted from the roots has good quality and quantity, but it is too difficult for two reasons.

Choosing suitable primers is very important process for PCR-RAPD to get clear and good bands. Seven primers were used during the screening of the RAPD primers. The banding patterns which were clear and reproducible bands selected. The selected primers were OPC09 (CTCACCGTCC) and OPA10 (GTGATCGCAG) (Figure 2 and 3). Some polymorphisms were easy to score where as other bands appeared to produce ambiguous fragments [10]. The best primers will produce more than three clear fragments. The number of fragments generated depends on the primer sequence rather than the nucleotide length. 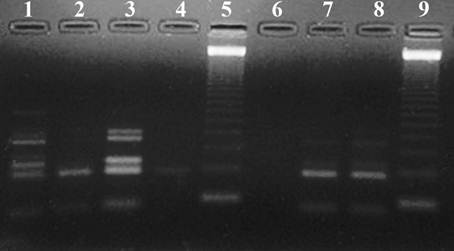 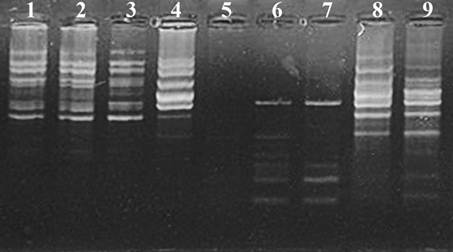 Design of degenerate primers involves finding the right balance between conflicting parameters. Moreover, a successful PCR amplification with degenerate primers can be achieved several ways and each case will be different. It is therefore useful to discuss the most critical parameters and how they can be manipulated. This should allow the experimenter to create amental picture of the process, which can be helpful when descisions have to be taken that may seem rather intuitive.

RAPD PCR product showed differences between the samples determined by the presence or absence of the bands. The bands 3-7-9 were common bands amplified in all samples. The number of amplified bands ranged from 1 to 10. DNA amplification variation was observed between samples collected from different geographical areas.

According to Nguyen [11], RNA and other contaminants would not have been easily detected when performing gel electrophoresis. For some genomes, the purity of the DNA sample will not affect the amplification reaction [12]. I guess by saying that Genomic DNA concentration is an important factor for the reproducibility of RAPD analysis.

If there is too much DNA, there would be increased chance for contaminants. The PCR cycle conditions can be one of the factors, like at certain temperatures, the primers might not bind to the template DNA. Other than DNA, this could result from imprecise pipetting or unintentional overlooking when doing master mix for PCR reaction. Another factor for unsuccessful PCR product might be due to the primers not finding complementary bases on the template DNA [13].

Phylogenetic trees constructed by the RAPD data clusted the trees into three main groups corresponding to the main geographical areas of gum Arabic in Sudan, Blue Nile, Kordofan and DarFur.

The study showed a wide range of genetic variation between the geographical areas from where the trees were selected. Trees in Kordofan area were known to produce more gum Arabic than the other two areas. This which agreed with Gray et al. [14] reported that provenances of A. senegal that yielded more gum had low water use efficiency (WUE). This suggests that low WUE is actually associated to increased gum production. However, it will have to be tested whether trees with low WUE are prone to higher mortality under extreme and dry conditions.

The observed patterns indicate divergent population history across the three areas of production which associated to the changes in their climatic conditions. The high genetic similarity between populations of Kordofan with population of DarFur in the west of Sudan is an agreement with the similarity of the enviromental nature of this two areas.

Further research is needed to document the genetic composition and identify genetic markers associated with geographical site, quality and quantity of produce Gum. More studies and researchs are needed for the differences between the two species Acacia senegal and Acacia seyal.