Deer are perhaps the most ancient of all the typical ruminants, making their appearance in the lower Miocene, where the species were of small size and for the most part un- provided with antlers [13]. Deer found throughout the world either in the wild or as farmed animals. The Indian Muntjac (Muntiacus muntjak) is commonly called the "barking deer" due to the bark-like sound that it makes as an alarm when danger is present. Sometimes these deer will bark for an hour or more. This is widespread throughout Southern Asia, but is one of the least known Asian animals.

Muntjacs have a reddish coat of a rather uniform hue, without any conspicuous markings on the legs or tail. The color of the belly and the inside of the legs are a little paler. The tail is short and pointed, the muzzle is rather large and black. There are no noticeable seasonal changes in coat color. Newborn have a spotted coat, but since they are very small and remain hidden rather than following their mother during the first few weeks of life, one is unlikely to see spotted fawns in the field. There is no sexual difference in coat colour except for the two black lines that run along the antler pedicles of males and that extend down the face. Both sexes have large preorbital glands located at the corner of the eyes that appear as a sigmoid fold of skin right in front of the eye. They are larger in males and are very conspicuous when reverted prior to marking with them or during intense aggressive interactions [3] [4] [9]. In addition both sexes have a pair of frontal glands: two straight slits on the face, between the eyes [3]. Males are only a little larger than females in body weight (e.g. about 22 kg vs 20kg) [15].

The Indian Muntjacs are polygamous animals. Females reach puberty during their first to second year of life. These females are polyestrous, with each cycle lasting about 14 to 21 days and an estrus lasts for 2 days. The gestation period is 6 to 7 months and they usually bear one offspring at a time but sometimes produce twins. Females usually give birth in dense growth so that they are hidden from the rest of the herd and predators. The young leaves its mother after about six months to establish its own territory. Stags often fight between one another for possession of mating the does. Indian Muntjacs are distinguished from other ungulates in showing no evidence of a specific breeding season within the species given its wide geographical range and its great adaptability, the species M. muntjac as a whole may be one of the least threatened deer in the region. The IUCN gives status to all ten subspecies of M. muntjak [17] presumably on the basis of sufficient data.

Conservation of nature and natural resources is now a global concern. The world deer industry is growing about 20% annually & about five millions deer’s currently being farmed. Without proper scientific knowledge on conservation management, natural resource utilization is very difficult. No other study has been performed like this. The objective of the study was to know the phenotypic characters and reproductive parameters of the barking deer of Chittagong Zoo.

The study was conducted at Chittagong Zoo which is located at Khulshi, Pahartali, Bangladesh adjacent to Foy’s lake. The Zoo was established at 28th February, 1989. Its total area is about 6.0 acres. The land of the zoo is covered with sloppy, hilly, flat bends along the side lakes with steep sides. There is natural forest over the hills with good numbers of trees within the zoo area. The zoo is surrounded by a boundary wall of about six feet high. At present there are about 67 species and total number of animals is about 365.

The study was carried out on the management of Barking Deer. Four barking deer consisting of adult male (02), adult female (01) & juvenile (01) were present at the time of the study.

In this study, it was observed that. Feeding of Barking Deer was devoid of green fodder, where as vegetables (Lau, Misty Kumra and Carrot @ of 1.8 kg, 1.8 kg and 1.6 kg per animal per day respectively) and concentrates (Gram and Rice bran @ 0.3 kg and 1.0 kg respectively) were supplied only. Green fodder was not given due to the parasitic infestation load said by zoo authority. After several parasitic infestations, green fodder supplement was stopped. Additionally amloki was given when available in the market @ 20gm per individual deer.

*Seasonal, based on availability.

Here vegetables and concentrate were supplied altogether where as [1] reported, concentrates are fed in the forenoon plus seasonal fresh grass and vegetables in the afternoon. In case of pregnancy, the amount of feed is increased. Feeds were calculated as individual basis then given altogether for the Deer. In morning, feed were supplied around 11.00 am and around 4.00 pm in the evening session. This ration for Barking Deer was not formulated on any standard in respect to their annual requirement for crude protein (CP) and metabolisable energy (ME). Here AD3E, Calphos vet and DB vitamin were supplied as vitamin mineral source, for 10 days consecutively and then made an interval of ten days and again continue. Normal Saline was given in summer season to reduce stress. In Chittagong Zoo, it was observed that water was supplied once daily, more or less 5 liter per day for Barking deer.

Data were collected on physical visit to the Zoo. The following characters were recorded.

• Length of ear was taken by measuring tape from the base to tip of ear.

• Length of fore and hind legs were taken by tape from hip joint to hoof.

• Tail was taken by tape from the base to the tip of tail.

• Length of antler was taken by tape from the base to the tip of antler.

• Weight measures of different aged deer by measuring scale. Without this adult male and female

During the study period (12 weeks) the zoo was visited in every alternative day. Most of the management practices were observed physically and required data were collected from the record books of the zoo with the coordination of the Zoo authority in addition to current data.

The collected data were analyzed by using the statistical program of computer, Microsoft word, Microsoft Excel and ANOVA.

The phenotypic characters and parameters of the Barking Deer were observed during the study period and the findings of the study are discussed in a tabular form in below.

In this study, the body coat color was reddish which is similar to the findings of [13] (reddish). 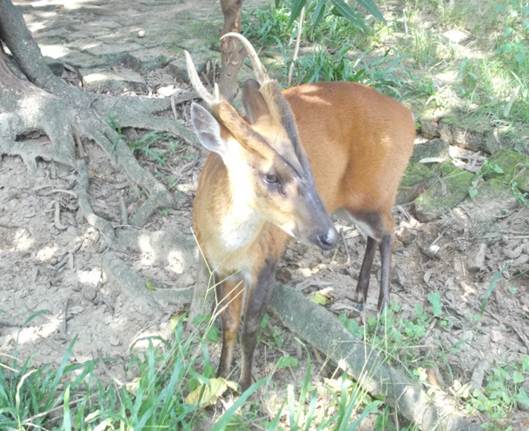 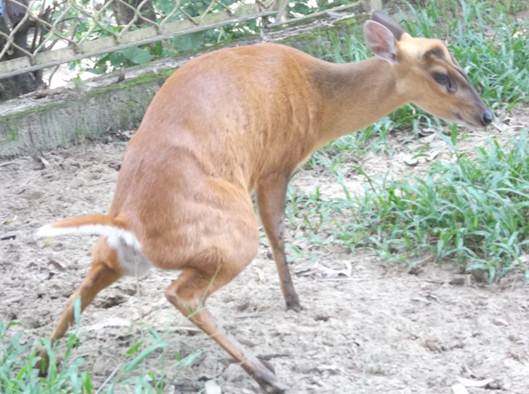 Average males and females weaning weights were 19.98±1.28 and 18±1.05 kg and the highest and lowest weaning weights were 27.10, 15.30 kg and 24.30, 14.30 kg, respectively in Dhaka Zoo [2] which is more or less similar to the findings of presented result. The weight were varied in several times may be due to the change in management and also change in weather condition of Chittagong zoo areas.

The study revealed that the management of Barking Deer at Chittagong Zoo was partially standard in response to the actual standard means.