Abstract: In spite of major achievements in the immunisation sector challenges still remain for the program in Bangladesh, specially to maximize coverage and minimize dropout rates in its Hard to Reach areas. Maulvibazar, a northeastern district of the Bangladesh is one of the 64 districts in the country. In the year 2014 valid vaccination coverage by age of 12 months among 12-23 Month-Old Children in the district for Penta-1 and for Penta-3 was 89.3% and 89.6% respectively and for MR vaccine it was 80.3%. Dropout rate for Penta1-Penta3 vaccines was 3.9% and Penta1-MR vaccine was 8.7% in the same year, which is respectively 2% and 2.9% higher than national dropout rate. This study aims to determine the dropout rate for immunisation services in Maulvibazar district over a period of one year using Penta1 to Penta3 and Penta1 to MR vaccine. The study was carried out from January 2015 to December 2015 in eight hard to reach unions of Maulvibazar district over a period of one year. Using the individual union coverage data and immunisation monitoring chart, dropout rates have been calculated among children less than one year of age in the selected unions. When Penta1 and Penta3 vaccine dropout rate is calculated in four months interval it was not statistically significant (P=0.267). But when Penta1 and MR dropout rate has been calculated in the same period of time it has shown strong significance in dropout rate (P=0.012). When total number of children receiving Penta1, Penta3 and MR vaccines has been plotted, it has shown a gradual increase in vaccination coverage from January to December. Dropout rates found in this study in selected eight hard to reach unions are very minimal for Penta1-Penta3 vaccine. But for MR vaccine the dropout rates are much alarming. The reason for lower immunisation coverage and higher dropout rates could well be the distance of near by health facilities from these hard to reach areas, bad road conditions and lack of knowledge about vaccination and vaccine preventable diseases.

Bangladesh, officially Peoples’ Republic of Bangladesh is a sovereign country in South Asia. It is world’s eighth most populated country and fifth most populated country in Asia. Total population of the country as of 2016 is 162,903,941 [1]. The country consists of Eight divisions and sixty-four districts [2]. Immunisation is one of the biggest success stories of the country since its birth in 1971. It is estimated immunisation alone contributes to the reduction of child mortality by 15-20% in the country [3].

In Bangladesh immunization program is delivered through Directorate General of Health Services (DGHS) with support from World Health Organisation, UNICEF and Global Alliance for Vaccine and Immunisation (GAVI). EPI or Expanded Program on Immunisation started in Bangladesh on April 7, 1979. As vaccination centres were few and were mainly located in urban areas, EPI coverage remained less than 2% till 1984. But it is only after 1985 EPI program was seriously boosted up when the country was committed to United Nations to reach universal child immunisation by 1990. EPI program was intensified in 476 upazillas, 92 major municipalities and in 6 city corporations [4]. By 1990 immunisation was made available to all target groups. Within 5 years the percentage of fully vaccinated children reached from 2% in 1986 to 62% in 1990. And from a crude fully vaccinated rate of 76% in 1995 the country has achieved an impressive 92.3% crude fully vaccinated rate by 2014 [5]. Bangladesh along with ten other Southeast Asian countries has been certified as polio free in 27th March, 2014 [6].

Under current EPI schedule in Bangladesh every child under one year receives one dose of Bacille Calmette-Guérin or BCG vaccine, three doses of Pentavalent or Penta vaccine (combination of diphtheria-tetanus-pertussis, Hepatitis B and Haemophilus influenzae type B), four doses of Oral Polio Vaccine or OPV (zero dose at birth), two doses of Measles-Rubella or MR vaccine and three doses of Pneumococcal Conjugate Vaccine or PCV vaccine and one dose of Inactivated Polio Vaccine or IPV [4]. PCV and IPV both vaccines were launch in March 2015 [7]. The EPI program also aims at women of childbearing age and pregnant women for five doses of Tetanus Toxoid or TT vaccine. Government of Bangladesh funds 56% of all spending on immunisation program [2].

The EPI service delivery mechanism in rural areas relies on 64 districts, 482 upazillas, 4498 unions, 13,494 wards and 108,000 sub-blocks within these wards. Each sub-block has an EPI outreach site where routine immunization services are provided monthly for catchments of approximately 1000 populations. One of the major contributors to this success is Immunisation and vaccine Development (IVD) program of World Health Organisation, Bangladesh. GAVI funds are also supportive of the immunization program. These funds are used for different training, recruiting district level support staffs and sometimes to provide additional support for hard to reach areas or populations [4]. Along with out reach sites vaccination is also performed through fixed sites like Upazilla health complexes (UHCs) and through various non-government organisations. It is the Health Assistants (HAs) who are primarily responsible for immunisation activities with assistance from Family Welfare Assistants (FWAs) [8].

In spite of major achievements in the immunisation program challenges still remain for the program. Only 75% children of one year of age have received all doses of vaccines, which they are supposed to receive by the first year of life. At the same time significant disparities are seen specially in Penta3 and MR vaccines coverage as 13 out of 64 districts (20%) has Penta3 coverage less than 80% and 11 out of 64 districts (17%) has MR coverage less than 80% [4]. The total number of children who has received at least one of the recommended vaccines has reached to 81.6% according to 2014 coverage evaluation survey but this also means still there is 18.4% children who has never received any vaccine [5].

Immunisation coverage varies depending on area and socio-economic groups. While five out of every four children receives at least one dose of the recommended vaccines, only three out of five are being fully vaccinated. Estimated coverage of Penta-3 vaccine was 86% worldwide and MR vaccines was 85% worldwide in 2014, while in Southeast Asia coverage for both vaccines were 84%. In the same year 129 (66%) out of 194 WHO countries have achieved ≥90% national Penta3 coverage and 57 (29%) achieved ≥80% Penta3 coverage in every district [9]. Dropout rates are higher in rural areas specially in hard to reach unions.

Maulvibazar, a northeastern district of the country is one of these 64 districts in Bangladesh. It is a part of Sylhet division. The district is surrounded by Sylhet in the north, Habigonj at the west and Asam and Tripura state of India at east and south respectively. The district’s total area is 2799.37km2 and total population according to 2011 census is 1,919,062. Every year specially during the rainy season the low lying parts of the district gets flooded by surplus water following through three rivers of the district which have their origin in India. Out of 44 unions of the district, 40 are extremely hard to reach unions (see Picture 1) [10]. Conducting immunisation sessions in these unions are difficult due to their distance and lack of transportation from main land.

Therefore, this study aims to determine the dropout rate for routine immunisation program in Maulvibazar district over a period of one year using Penta1 to Penta3 and Penta1 to MR vaccine. This is believed to help the immunisation program to get an idea about and over come a major bottleneck situation in hard to reach areas. At country and local level the study will government and health authorities to improve immunisation activities in areas where coverage is low. Along with this, the study will also form a database based on which further research and policy measures can be carried out. 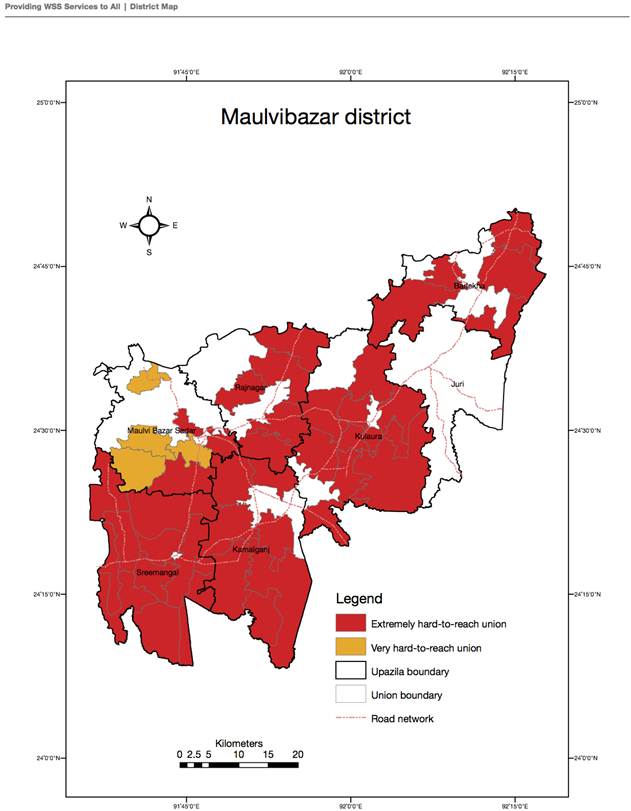 The study was carried out in eight hard to reach unions of Maulvibazar district over a period of one year. Total population in these selected unions were 243,526, total number of 12 months old children were 5435, total number of 12-23 month old children were 4131 and total number of out reach vaccination centres were 788 (see table 1). All eight unions are extremely hard to reach unions. Except for Tengra and Kamar Chak six others are hilly regions, Rengra and Kamar Chak are beel (swamp) areas. The out reach centres and upazilla health complexes (UHCs) have data of all eligible children for vaccinations in these areas. Using the individual union coverage data and immunisation monitoring chart, dropout rates have been calculated among children less than one year of age in the selected unions. Children who moved out or moved in within last three months have been excluded. Dropout rates have been calculated using Penta1-Penta3 and Penta1-MR.

Table 1. Name and demographics of selected hard to reach unions.

Informed written consent was sought and obtained from respective UH&FPOs (Upazilla Health and Family planning officer) and ethical approval was taken from Civil Surgeon, Maulvibazar district. Data was analysed using SPSS and Microsoft Excel. Data presentation was in the form of tables and graphs. P values and Confidence intervals are calculated using Chi-square. The mean and ranges of all variables are calculated. The level of significance was set at P ≤ 0.05.

Average number of children vaccinated with Penta1 per month is 406, Penta3 is 408 and MR is 368. When Penta1 and Penta3 vaccine dropout rate is calculated in four months interval it is not statistically significant (P=0.267) (see table 3).

But when Penta1 and MR dropout rate has been calculated in the same period of time it has shown strong significance in dropout rate (P=0.012) (see table 4).

When total number of children receiving Penta1, Penta3 and MR vaccines has been plotted, it shows a gradual increase in vaccination coverage from January to December (see Figure 1). 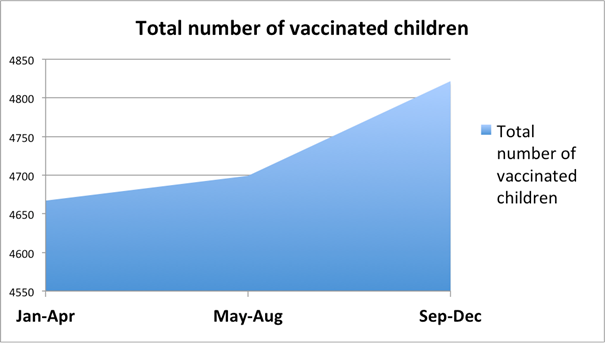 Figure 2. Comparison among vaccination coverage in different parts of the year (January 2015- December 2015).

The reason for lower immunisation coverage and higher dropout rates could well be the distance of near by health facilities from these hard to reach areas. Bad road condition or at times no roads at these hard to reach areas could also play a vital role in their lower vaccination coverage and higher dropout rates. Due to these unions being either hilly or swamp areas continue routine immunisation in the rainy season in these areas could be very much challenging. This has been reflected in the study as well as vaccination coverage being the lowest at the beginning of the year and gradually increasing and reaching at the highest point at the end of the year that is when rainy season ends and winter begins.

Immunisation coverage could be even lower in these hard to reach unions as depicted in the study. The reason behind this is immunisation coverage in rural and hard to reach areas can often "mask" the real situation. According to 2014 coverage evaluation survey about 1% children have never received any vaccine, which though seem not significant but to eliminate vaccine preventable diseases even one child being left out is not acceptable.

Immunisation every year save lives of two million children, yet 2.5 million deaths occur every year due to vaccine preventable diseases worldwide [13]. There is scope for further research to explore the reasons for higher dropout and left out rates in rural and hard to reach areas of Bangladesh. The country being a role model for its immunisation achievements needs to identify gaps in its routine immunisation program and act accordingly to reach the children in country’s hard to reach areas to maximum coverage for vaccine preventable diseases and maintain its polio free status.