Abstract: In this work optical solitons carrier generation in a nonlinear waveguide microring resonator (MRR) is simulated and presented. Therefore, a system comprises of a W-band (75 to 110 GHz) optical millimeter wave generation using a Panda microring resonator (PMRR) is presented. A bright soliton with a central frequency of 50 GHz and power of 1 W is introduced into the PMRR. The optical Kerr effect manifests itself temporally as self-phase modulation, a self-induced phase- and frequency-shift of a pulse of light as it travels through a medium. Large bandwidth within the microring device can be generated by using a soliton spectrum input into the nonlinear PMRR. The 90 GHz free spectral range (FSR) solitonic signals were simply generated by adjusting the system parameters. By beating the closely center frequencies of the solitonic signals, we can obtain a center frequency which corresponds to that spacing as millimeter wave used for many applications in signal processing and communications such as wireless cable systems and indoor–outdoor communication.

Nowadays in order to satisfy the increased desire of high-speed data communication, wireless links which can provide multi gigabit-per-second capacities into the core network are getting more attention [1-4]. Optics has become the way by which most information is sent over nearly all the distance that it travels.

The remarkable growth of networks and the Internet over the past decade has been enabled by previous generations of optical technology. Optics is, furthermore, the only technology with the physical headroom to keep up with this exponentially growing demand for communicating information.

Carrier frequency translation can be done whether in electrical or optical domain [5-8]. Passive optical networks (PONs) are the primary broadband optical delivery architecture, providing the shared bandwidth of a fiber to multiple users (16 to 64 users). Generation of mm-wave signal in electrical domain is a challenging issue due to large loss and high cost [9-12].

Propagation attenuation is not purely problematic, however. The added loss at frequencies such as 24GHz and 60GHz can result in a faster drop in the signal power resulting in potentially higher frequency reuse ratio for a cellular implementation, where the same frequency can be used nearby by a different base station. The propagation properties of mm-waves are closer to their yet higher frequency electromagnetic siblings, namely, visible light.

The optically distribution and processing of signals in the mm-wave range is much preferred [13-17]. These schemes of optical millimetre-wave signal generation and up-conversion pave the way for future-proof access networks using all-optical technologies. Recently, several studies are conducted to generate mm-wave signals whether in V-band (57~64 GHz) or for higher data rates, W-band (75~110 GHz) [18-23].

Even some efforts have been done to improve the W-band RoF systems but still practical generation of high data rate W-band signal is challenging issue and requires more research to improve the system both technically and economically. Table 1 compares some recent works and their methods to generate W-band signal and highlights the drawbacks of each method separately.

As can be concluded from Table I these methods are suffered from spectral efficient modulation or narrow-linewidth laser, which increase the cost, complexity and efficiency of the overall system. Higher spectral efficiency (SE) and better transmission performance can be achieved using systems of microring resonators (MRRs) [31-34]

Optical MRRs recently are interesting subject in the area of integrated optics because of their unique aspects such as compactness, low cost, tunability and easy integration on a chip with other photonic devices, having a variety of applications such as optical filter, optical switch, optical modulator, optical delay line, dispersion compensator and optical sensor.

Add/drop filter system which create or filter narrowband wavelength signals from wider optical spectrum and connected to the bus waveguide are generally basic foundations of building blocks in addition to optical communication devices. Furthermore, MRRs have excellent wavelength selection properties and can be used to design tunable filters, modulators, wavelength converters, and switches that are critical components for optical interconnects.

Based on the formulated problems concerned by previous studies, in this work optical solitons carrier generation in a nonlinear waveguide MRR is presented [35, 36]. A Panda Microring Resonator (PMRR) is used to generate W-Band soliton signals with upper and lower optical carriers to be applied for telecommunication systems.

Nonlinear light behaviour inside a PMRR occurs when a strong signal of light is inputted into the ring system; this is used for many applications in signal processing and communication such as wireless cable systems and indoor–outdoor communication [37-39]. The PMRR consists of a centred ring resonator connected to two smaller ring resonators on the right and left sides. The properties of a MRR can be modified via various control methods [40-42].

MRRs can be used as filter devices where trapping of optical frequency or wavelength can be obtained using suitable system parameters [43-45]. Results in this paper show that the system support both single-carrier and multi-carrier optical soliton signals that can be used in W-band transmission/receiver systems.

The system of W-Band frequency band generation is shown in Figure 1. Here, a PMRR is used. The filtering process of the input soliton spectrum is performed via the system, where the frequency band ranges of 193–194 THz can be obtained. 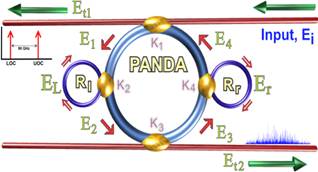 MRRs are simulated using waveguide, where the medium has Kerr effect-type nonlinearity [46]. The Kerr effect, also called the quadratic electro-optic effect (QEO effect), is a change in the refractive index of a material in response to an applied electric field.

The optical Kerr effect manifests itself temporally as self-phase modulation, a self-induced phase- and frequency-shift of a pulse of light as it travels through a medium. This process, along with dispersion, can produce optical solitons. Spatially, an intense beam of light in a medium will produce a change in the medium's refractive index that mimics the transverse intensity pattern of the beam. The Kerr effect causes the refractive index (n) of the medium to vary; it is given by [47-50]

where n0 and n2 are the linear and nonlinear refractive indexes, respectively, and I and P are the optical intensity and the power, respectively [51-53]. The effective mode core area given by Aeff ranges from 0.10 to 0.25 µm2 in terms of practical material parameters (InGaAsP/InP) [54-56].

When the interaction between atoms is attractive, bright solitons can be generated. In this study, a bright soliton with a central frequency of 50 GHz and power of 1 W is introduced into the first ring resonator, R1, expressed by

. The input optical field of the optical bright soliton is given by [57-60]

and z are the amplitude of optical field and propagation distance, respectively, LD is the dispersion length of the soliton signal [61, 62], and the carrier frequency of the signal is ω0.

The soliton signal keeps its temporal and spatial width invariance while it propagates; therefore, it is called a temporal and spatial soliton [63-65]. A balance should be achieved between the dispersion length (LD) and the nonlinear length (LNL=1/ΓΦNL) [66-68]. Here, Γ=n2×k0 is the length scale over which disperse or nonlinear effects make the beam become wider or narrower; hence, LD=LNL. The interior signals are given as follows [69-72]:

is the intensity coupling coefficient [73, 74],

. Therefore, the output signals from the through and drop ports of the PMRR can be expressed as [86-89]

Here the Et1 include two frequency components which are allocated as upper and lower optical solitonic carriers called UOC and LOC respectively shown in Figure 2 [90-92]. The fixed and variable parameters of the PMRR are listed in Table 2.

Table 2. Fixed and variable parameters of the PMRR.

The results of the chaotic signal generation are shown in Figure 2. The input soliton spectrum with a power of 1 W is inserted into the system. Large bandwidth within the microring device can be generated by using a soliton spectrum input into the nonlinear PMRR.

This means that the broad spectrum of light can be generated after the soliton pulse is input into the ring resonator system. The signal is chopped (sliced) into smaller signals spreading over the spectrum; thus, a large bandwidth is formed by the nonlinear effects of the medium. A frequency soliton signals can be formed and trapped within the PMRR with suitable MRR parameters.

Interior soliton signals inside the PMRR can be seen in Figure 2, where the filtering and trapping processes occur during propagation of the input soliton spectrum inside the system. Figure 2(a-d) shows the interior generated signals of the PMRR.

Filtering of the interior soliton signals can be performed when the signals pass through the couplers, κ1, κ2, κ3, and κ4. The output signals from the throughput and drop ports of the system can be seen in Figure 3, where solitonic optical carriers ranges of 193–194 THz are generated and used in many communication applications, such as wireless personal area networks (WPANs), wireless local area networks (WLANs) and Radio over Fiver (RoF) [93-97].

Based on Figure 1 and presented parameters in Tables 2, the PMRR generates frequencies of 193.3 and 193.39 THz respectively which are 90 GHz apart. By beating the closely center frequencies of the throughput output signals, we can obtain a center frequency which corresponds to that spacing as millimeter wave [105].