Abstract: Fungal otitis is an acute or subacute infection evolution, sometimes serious and rebellious to treatment. The objective of this work is to determine the prevalence of this infection in patients diagnosed at the laboratory of parasitology and mycology of the military hospital of Marrakech. A prospective study was performed that included patients with clinically suspected otomycosis. The ear removal is practiced during the otoscopic examination and diagnosis was confirmed by direct examination and culture. 19 cases of otomycosiswere diagnosed in 52 patients. Isolated fungal species were dominated by molds with a prevalence of 68.4% (N = 13) followed by the yeast with 31.6% (N = 6). It was not noted association of two fungal species. Aspergillusniger (35%), Aspergillusflavus (29%) and Candida albicans (13%) accounted for the most isolated fungal species. Otomycosis prevalence varies among studies. It is an infection that remains rebellious to treatment and whose management is difficult. It must be multi disciplinary combining mycological study as a diagnostic tool.

Fungal otitis is a relatively common disease, its prevalence across studies represent 5 to 30% of all external otitis. The often chronic or subacute, it can also affect the middle ear and in some severe cases the inner ear. Currently, the involvement of fungi as pathogens is increasing [1]. A fungal etiology should be considered in otitis chronic suppurative, when the otorrhea is persistante. Invasive fungal otitis are forms of very rare and correspond to an evolution of the necrotizing the infection. The diagnosis of fungal otitis is mainly based on the clinical and mycological examination, combining direct microscopy and culture to identify the causative fungal agent. The objective of our work is to know, identify and characterize the fungal causative agents of otomycosis patients [1, 2].

This is a informative study conducted between January 2014 and December 2015, which included patients with clinically suspected otomycosis. The diagnostic confirmed in laboratory of parasitology and mycology of the military hospital of Marrakech. Atrial sampling is carried out under microscopic examination during otoscopic examination using sterile, dry cotton swabs. For each ear, two swabs are used, the first intended for examination microscopic direct, the second for culture. Each biological specimen, a direct review was conducted under an optical microscope in a drop of sterile saline 0.9%. A culture medium on Sabouraud - chloramphenicol and Sabouraud - chloramphenicol actidione was performed. Cultures were incubated at 28°C for 7-15 days until fungal colonies appear. The identification of yeast-like colonies is based on the filamentation test, chromogenic media and galleries API 20C Aux. The identification of filamentous fungi is based on the macroscopic and microscopic appearance of the colonies.

Of a total of 52 ear samples to the lab, aotomycosis was confirmed on the basis of direct examination and a positive culture in 19 cases, a prevalence of 36.5%. The sex ratio female / male was 1,2. The otorrhea was the main symptom followed by ear pain and itching. Isolated fungal species were dominated by molds with a prevalence of 68.4% (N = 13) followed by the yeast with 31.6% (N = 6). It was not noted association of two fungal species. Aspergillus niger (35%), Aspergillus flavus (29%) and Candida albicans (13%) accounted for the most commonly encountered fungal species (Figure 1). 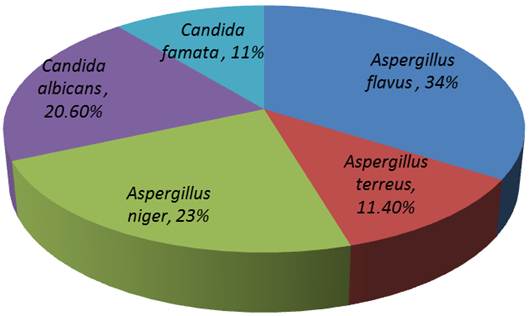 Otitis externa is common and manifests as an acute or chronic form. The acute form affects four in 1,000 persons annually and the chronic form affects 3-5% of the population. Acute disease commonly results from bacterial (90%) or fungal (10%) overgrowth in an ear canal subjected to excess moisture or to local trauma. Fungi are abundant in soil or sand that contains decomposing vegetable matter. This material is desiccated rapidly in tropical sun and blown in the wind as small dust particles. The airborne fungal spores are carried by water vapors, a fact that correlates the higher rates of infection with the monsoon, during which the relative humidity rises to 80% [3].

The prevalence of otomycosis is also related to the geographic distribution. It’s more common in hot climates: tropical and subtropical countries, and in people who practice aquatic sports. Various factors have been proposed as predisposing factors for otomycosis local injury, immunocompromized host, long term use of broad spectrum antibiotics or steroid preparations, co morbid conditions like diabetes & dermatological disease [4,5,6]. An American study found that the incidence peaked during the summer months [7]. About 1 in 8 of otitis external infections is fungal in origin. 90% of fungal infections involve Aspergillus spp. and the rest Candida spp. [8]. Many of the times diagnosis is made clinically with high rate of suspicion on the basis of clinical sign & symptoms [2,5]. This may explain the small sample we recruited in our study. The specialists deal directly without realization of a suitable mycological sampling.

In present study, molds come to the head of our isolates, exclusively represented by the genus Aspergillus with a particularly high frequency Aspergillusflavus followed by Aspergillusniger. Regarding yeasts, only the genus Candida was isolated.

Aspergillus flavus overwinters in the soil and appears as propagules on decaying matter, either as mycelia or sclerotia. Sclerotia germinate to produce additional hyphae and asexual spores call conidia. These conidia are said to be the primary inoculum for A. flavus. The propagules in the soil, which are now conidia, are dispersed by wind and insects (such as stink bugs or lygus bugs). The conidia can land on and infect either grains or legumes. The spores enter the corn through the silks and thus infect the kernel. Conidiophores and conidia are produced in the spring from sclerotial surfaces. There is a secondary inoculum for Aspergillus flavus, which are conidia on leaf parts and leaves. Aspergillus flavusgrows on leaves after damage by leaf-feeding insects. Insects are said to be a source of inoculum and promote inoculum production[12].

A. flavus is unique in that it is a thermotolerant disease, so can survive at temperatures that other diseases cannot. A. flavus can contribute to the storage rots, especially when the plant material is stored at high moisture levels. A. flavus grows and thrives in hot and humid climates [13]. Primary infection is caused by the inhalation of spores; bigger spores have a better chance of settling in the upper respiratory tract. The deposition of certain spore sizes could be a leading factor for why A. flavus is a common etiological cause of fungal sinusitis and cutaneous infections and noninvasive fungal pneumonia. Countries with dry weather, such as Saudi Arabia and most of Africa, are more prone to aspergillosis. Two allergens have been characterized in A. flavus: Asp fl 13 and Asp fl 18. In tropical and warm climates, A. flavus has been shown to cause keratitis in about 80% of infections [13].

It was most common agent too in other studies reported A. flavus as the most common cause of otomycosis [1,14,15]. Panktiet alreported Aspergillus fumigates as the predominant pathogen while Pontes noted Candida genus as commonest isolate in otomycosis [5,10].

The clinical diagnosis of otomycosis should be supplemented by microscopy and culture of debris material taken out from the external auditory canal or mastoid area like cholesteatoma. The presence of fungal structures is seen in potassium hydroxide (KOH), calcofluor white or blankophor wet mounts. The microscopic examination shows discrete clumps of hyphae with conidiophores. In otitis externa caused by Aspergillus niger, septate hyphae, sporulating vesicles and abundant black spores are seen. Immunofluorescence microscopy, using fungal-specific monoclonal antibodies, has been performed as a rapid, accurate and sensitive diagnostic technique [16].

If tympanic membrane perforation is observed, Aspergillus fumigatus cultured, local invasion is clinically apparent or the patient is immunocompromized, invasive otitis externa should be suspected. Radiological techniques like CT scan or MRI are done to delineate any involvement of the adjoining anatomical sites. If infection appears to involve the middle ear and mastoid, biopsy should be taken for direct demonstration of invasive fungal infection as well as fungal culture.

The treatment of fungal otitis diagnosed holders of patients is mainly engaged in washing the ear canal. The regimen also includes the application of an association based on a topical antifungal: Nystatin, a corticosteroid: triamcinolone acetonide and antibiotics: neomycin for 10 days [14]. They healed spontaneously with medical treatment. Rarely, fungi can cause invasive otitis externa, especially in immunocompromized patients. Aggressive systemic antifungal therapy is required in these patients, and a high rate of mortality is associated with this condition[17].

In some developing countries, patients are traditionally putting various types of oils in their external auditory canal. However, these oils are antifungal in nature, endorsing the therapeutic relevance of such tradition. Keratolytic agents, boric acid are widely used. Administration of 4% boric acid solution in alcohol and frequent suction cleaning of the ear canal might be a cost-effective treatment for otomycosis since 77% of the patients were treated effectively in this way.

The persons who work in such environment are advised to use long cap on the head to protect the entry of airborne fungi in the ears, and also not to seek the help of quack for cleaning the ears [16].

Fungal ear infections are quite common in Morocco. A fungal etiology should be considered before anychronic otitis especially when otorrhoea is persistent. The management of these conditions must include the mycological diagnosis and identification of the causative agent to appropriate therapy. Rebel frighteningly antifungal prescriptions available, the treatment of otomycosis must be associated with prophylactic measures namely the rational use of broad-spectrum antibiotics, the proscription of the use of scraping tools, irritating or alkalizing products.

The weak points of our study:

The strengths of our work:

1. sensitization of our clinicians to the importance of the mycological harvest before antifungal treatment.

2. to knowThe most isolated germ in otomycoses in our context