Abstract: The emerging zoonotic infection caused by Sarcocystis species is becoming a serious public health problem for animal rearers .This study was conducted to determine the prevalence of Sarcocystis species infection in slaughtered goats at some selected abattoirs in Makurdi metropolis. Histological investigation was carried out using Haematoxylin and Eosin (H and E) as the staining agent on the tissue samples of heart (21), oesophagus (191) and tongue (183) from 224 goats. The results showed that, out of the 224 goats examined, 84(37.50%) were observed to be infected with Sarcocystis species. Morphologically some appeared round, ovoid or globular while others were elongated, spindle-shaped that tapered at one end. Infection related to sex showed that females had higher (83.33%) rate than males (16.67%).With respect to infection due to age, 9.52, 28.57 and 61.91% for ages 1-2 years, 2-3 years and above 3 years respectively were noted. Sex and age of the animals were not determining factors of the infection (P>0.05).There was significant difference in prevalence of infection in the three muscular tissues examined, with oesophagus having the highest (63.10 %) followed by the tongue (34.52%) and heart being the least (2.38%) (P< 0.05). The presence of two distinct microscopic cyst shapes (elongated, spindle-shaped that taper at one end and the round, oval or globular form) prompts the need for further research to ascertain species-specific associated with this parasite in goats and other animals in Nigeria.

Sarcocystosis is a zoonotic infection caused by an apicomplexan protozoan parasite of the genus Sarcocystis [1]. The Sarcocystis spp. are common parasites with a wide range of hosts infecting mammals, birds, reptiles and fish [2,3,4,1]. The life cycle of these parasites is usually involving two hosts; a definitive host- that eats sarcocyst infected muscle tissue, and pass infective stage, the sporocysts. The second stage is the intermediate host, which ingests the sporocysts to form muscle tissue sarcocysts in return [5]. Based on prey-predator relationships, Sarcocystis spp. have two-host lifecycle; having herbivore or omnivore as intermediate (prey) host, and a carnivore as definitive (predator) host [1]. They frequently encyst in the skeletal and cardiac muscles of ruminants, equines, swine, birds, reptiles and humans [6-7] and are rarely found in other tissues [8].

It has been noted that ruminant intermediate hosts such as goats become infected through ingestion of sporulated oocysts or sporocysts from the faeces of infected dogs. Three species of Sarcocystis have been reported in domestic goats, these include; S. capracanis, S. hircicanis and S. Caprafelis [9-10]. Infection with this parasite has been reported in goats in many countries, such as: Brazil [11], Iran [12], India [13], Ethiopia [14], Nigeria [10], Sudan [15] and Jordan [16] using different methods of post-mortem and histopathological diagnostic approaches.

It has been observed that pathogenicity and economic loss in food animals associated with Sarcocystis spp. includes: loss of weight, anorexia, decreased milk production, anaemia, and prostration often culminating in death. It has also been stated that some species of Sarco­cystis are important pathogenic organisms that are dangerous to humans and livestock causing the disease called sarcocystosis [17-18].

Information on predilection sites and species differences with respect to Sarco­cystis cysts has been documented. It has been reported that the cysts are more abundant in the skeletal and cardiac muscles of ruminants than in the same muscles of equines, swine, birds, reptiles and humans [7].

Despite the fact that Sarcocystis spp. has been broadly studied in different species of animals and in different countries of the world, there is still paucity of information on these parasites in Nigeria, especially in Benue State. This work was therefore aimed at providing baseline information of Sarcocystis spp. prevalence in some abattoirs in Makurdi, Benue State.

The study was carried out in Northbank and Wurukum abattoirs in Makurdi metropolis. Makurdi, the administrative headquarters of Benue State, North-Central Nigeria, is geographically located at latitude 7.74° North and longitude 8.51o East, it has 104m elevation above the sea level. The mean monthly rainfall ranges from 150mm to 180mm, and the mean monthly temperature ranges from 27°C to 38°C. The city is located in Central Nigeria along the Benue River. 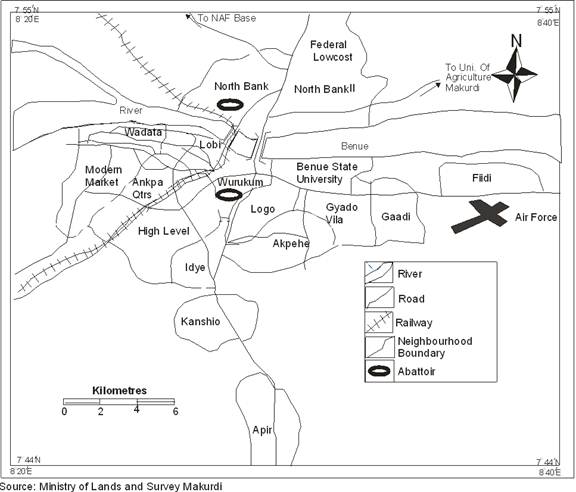 2.2. Collection and Preservation of Tissue Samples

The research was conducted in October, 2015. Muscle tissues were sampled from 224 goats, comprising of 39 males and 185 females. Cut section of the heart, oesophagus and tongue from slaughtered goats were collected and then put into sterile specimen bottles and immediately fixed with 10% formalin for further processing. Macroscopically, no pathological lesions were observed on these tissues; they were apparently normal, hence, samples were chosen at random. Each sample bottle used was labeled with the sex, organ and age of the goat. Also, date and place of collection were indicated. Samples were collected following aseptic laboratory techniques.

The fixed tissue samples of the heart, oesophagus and tongue were subjected to routine paraffin processing method. Histological sections of range 4–5μm thick each was stained with Haematoxylin and Eosin for tissue changes and structural determination of the Sarcocystis spp. microcysts, following laid down procedures [19]. Histological sections were viewed using an Amscope binocular light microscope under x100 and x400 magnifications. Photomicrographs of the prepared slides mounted on the binocular microscope were taken using a digital microscopic eyepiece (Scope Photo 3.0; Version 3.0 of 2003-2007). These pictures were then transferred to a computer where detailed studies were carried out.

3.1. Prevalence of Infection Based on Sex of Animals

Out of 224 animals examined, 84 (37.5%) Sarcocystis spp. microscopic cysts were detected. Results on the prevalence of sarcocysts based on sex differences are presented on table 1. Females were observed to have higher rate 70 (83. 3%) out of 185 samples examined compared to 14 (16.7%) in males with sample size of 39. There was no significant difference between sexes (P> 0.05).

3.3. Distribution of Sarcocyts in the Organs Sampled

No macroscopic sarcocysts were found in any of the samples obtained from the goats. Microscopic cysts observed in histopathological sections of the organs showed presence of different sizes of elongated sarcocysts between muscle bundles, each one surrounded by thin layer of muscle fibres (figures 3, 4 and 5).

Table 1. Prevalence of Sarcocystis spp. infection in relation to sex. 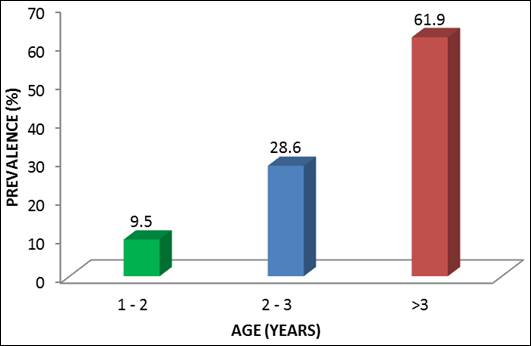 Figure 2. Prevalence of Sarcocystis spp. infection in relation to age.

Table 2. Prevalence of Sarcocystis spp. infection in relation to organs.

Macroscopic sarcocysts were not observed in the muscle tissues examined in this study. The organs appeared apparently normal, without any noted pathological lesions. This is in contrast with other studies where macroscopic Sarcocystis spp. cysts were found in a flock of sheep [20]. These forms of the parasite have also been reported in the skeletal and oesophageal muscles of domestic animals [5]. This goes on to imply that, animals like goat can harbour these parasites without pathological manifestations. In addition, some species have also been noted in histological sections, like S. cruzi, whereas, other species can be seen grossly, example, S. gigantea, and S. muris. More so, sarcocysts have been recovered from incidental examination of muscle tissues that were collected at necropsy from both domestic and wild species of cats suffering from debilitating disease and apparently healthy cats [21]. This further corroborates the findings of this research that sarcocysts can be present in apparently normal organs.

The overall prevalence of sarcocycts recorded in this study was 37.5%. This is slightly lower than the rate documented by 42.5% prevalence of sarcocystis infection in slaughtered cattle in Zango abattoir, Zaria, Nigeria [22]. Considerably high rate (71%) has also been reported in goats slaughtered at an abattoir in Bangalore, where 72.24% and 21.12% were positive for S. capracanis and S. Hircicanis [23]. Identification of specific species infecting goats was not within the scope of this study, although information on the literature incriminated three species that affect domestic goats worldwide, these include; S. capracanis, S. caprafelis and S. hircicanis of cattle and pigs [6].

The various shapes and sizes of sarcocycts (figures 3, 4 and 5)  recorded in this study is similar to findings of another researcher who further buttressed that the morphological variation depends on the type of host’s cell that houses the parasite [24]. The various shapes (spindle-shaped and elongate) of both S. capracanis and S. hircicanis which were discovered in a study in Bangalore [23] is similar to results of this study.

Sarcocysts were recovered from the muscle of various organs of domestic goats studied. This corroborates the findings of a research carried out in Philippines [25]. Highest prevalence was noted in the oesophagus 53(63.1%) followed by tongue 29(34.5%) with the least being the heart 2(2.4%).This agrees with the work of other researchers [23,10] who after conducting similar research reported the oesophagus to be the predilection site for microscopic cyst. This may be as a result of the feeding habit of goats because it has been established that the sarcocyts encysts on the grasses on which they feed. The oesophagus being a part of the alimentary canal receives the ingested food and thus harbors a greater part of the microcysts in the tissues thereby being highly infected. A contrary opinion has been reported from Israel where the tongue had the highest prevalence of sarcocysts in infected sheep [26]. It implies that the various organs of ruminants are susceptible to sarcocystis infection.

In as much as the prevalence of the infection was not associated with age (P>0.05), older animals (>3years) had higher rate of infection [26]. Also higher rates of sarcocystosis in sheep, age 2-4 years were reported. This could be attributed to the fact that older animals are more predisposed to contracting the infection because they are adapted to roaming in search of pasture as the free range system is usually the norm of breeding ruminants brought to the slaughter in Makurdi. Also, the rate of infection was highest among female goats than males. The reproductive potential of female animals which includes goats lowers their immunity against parasitic infections.

Findings from this study confirm previous reports that goat’s Sarcocystis spp. infection is present in Nigeria. The prevalence is relatively high in slaughtered goats, affecting all the organs examined, that is, the tongue, oesophagus and heart, with the oesophagus mostly affected. The presence of two distinct microscopic cyst shapes (elongated spindle-shaped that tapered at one end and the round, oval or globular form) prompts the need for further research to ascertain species-specific associated with this parasite.

The research team is most grateful to the Head of Department Veterinary Anatomy, Federal University of Agriculture, Makurdi, Dr Byanet Obadiah for his assistance at the abattoir and allowing the use of the laboratory for part of this work. Also to Mr Bamidele of A.B.U., Zaria, for assisting with tissue processing.

Figure 3. Photomicrograph of Sarcocystis spp found on the oesophagus of the female goat. ×100. 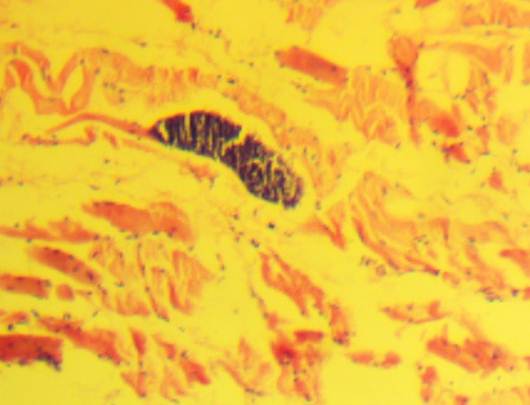 Figure 4. Photomicrograph of Sarcocystis spp. found on the tongue of a female goat. ×400. 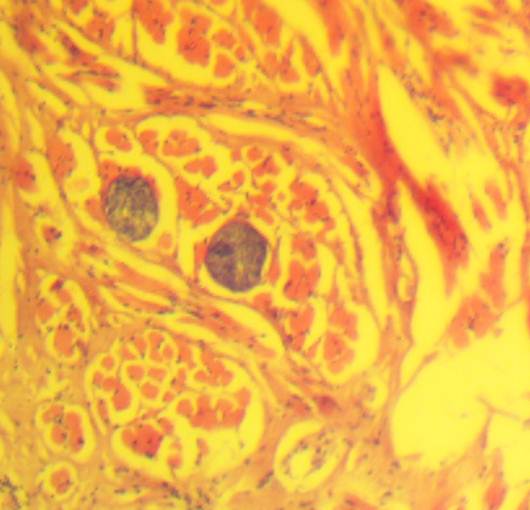 Figure 5. Photomicrograph of Sarcocystis spp. found in the heart of a female goat. ×400.